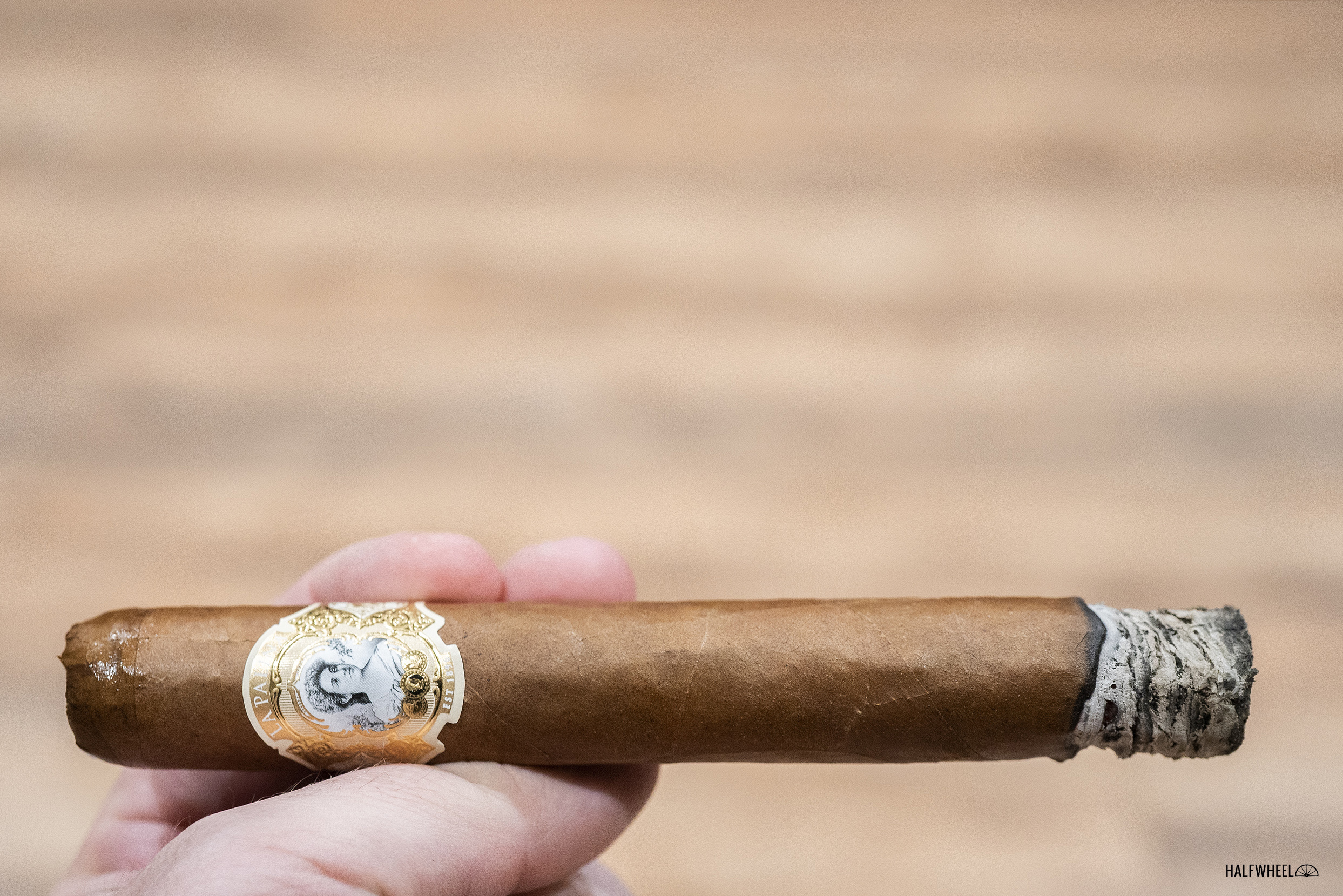 Coming out of a year full of disruptions to daily life, there is a bit of solace to be found when things do go according to schedule. For as minor of a thing as cigars are in the grand scheme of things, having an anticipated annual release still hit store shelves is welcomed.

The cigar is the La Palina Goldie No. 6, the latest release in a series that debuted back in July 2012 and has become one that has generally been met with brisk sales as fans snap up the limited production.

Given that this is the ninth release, the name may seem a bit odd, but it does not correlate to the release itself but rather a Cuban vitola known as Laguito No.6, a double robusto that measures 6 1/2 inches long and has a 56 ring gauge. There is only one cigar in the entire Habanos S.A. portfolio to use the size, the Cohiba BHK 56, which debuted in 2010 as part of the wider release of the Cohiba Behike BHK line.

Note: The following shows the various La Palina Goldie releases over the years. Some of these cigars may have been released after this post was originally published. The list was last updated on Oct. 17, 2022. 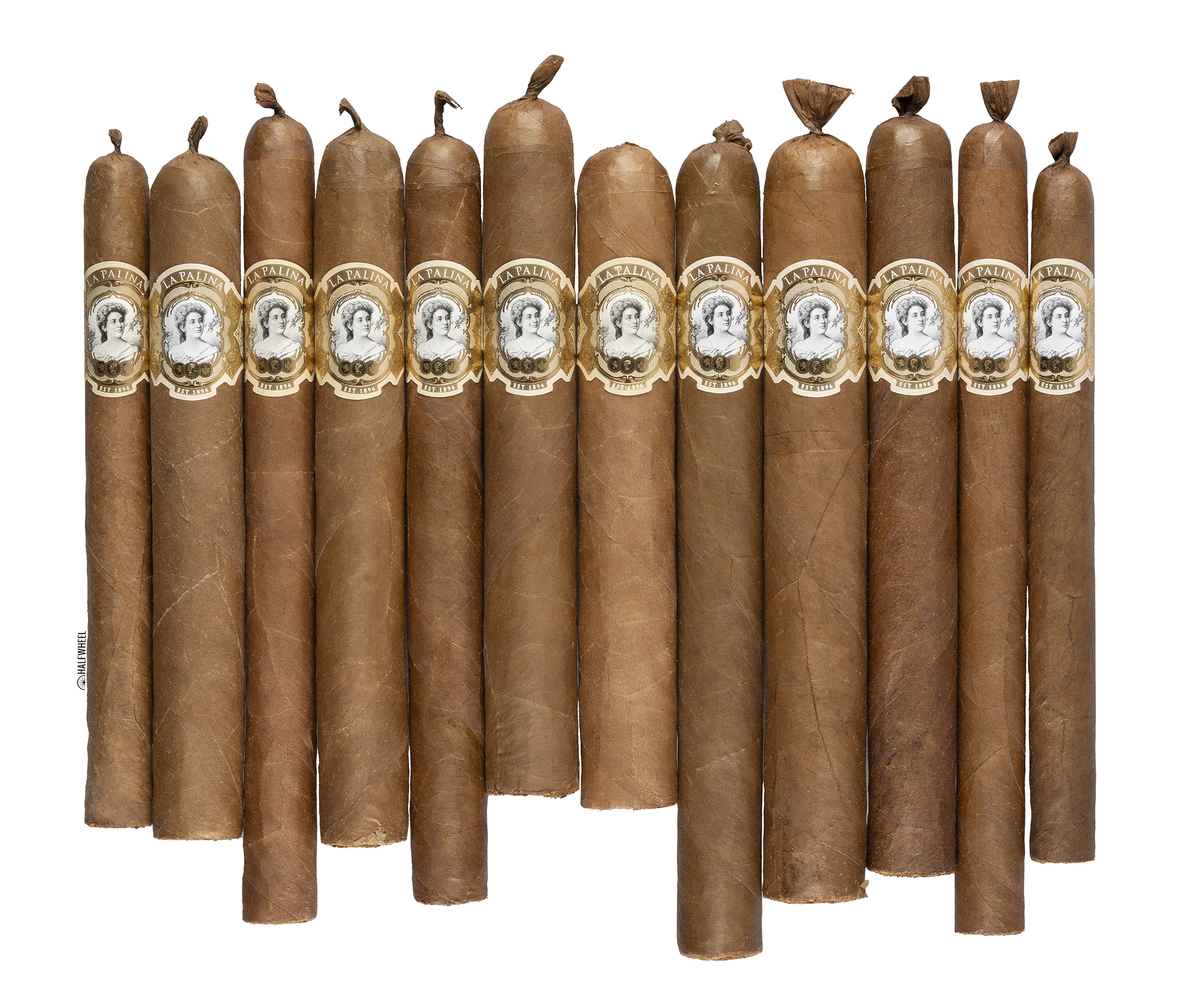 The La Palina Goldie No. 6 is an interesting cigar for me; it’s still a Goldie and shows the remarkable balance that the line is known for, yet either this size seems to hamper the tobacco from showing the complexity and rich, lush flavors that have pushed other vitolas into elite territory, or the tobacco simply didn’t have it. I’m not sure which one it is, and while the cigars were fine, I’m not sure how many more I’d want to go smoke to see if what I think the cigar should have is out there and I just happened to get three that didn’t. While I’m not inherently crazy about this latest vitola, on the whole the La Palina Goldie line remains one of the better annual releases in recent memory, and I continue to look forward to what the next vitola will offer.

The blend remains the same across the line, with an Ecuadorian habano wrapper covering an Ecuadorian binder and fillers from the Dominican Republic and Nicaragua, with some of the latter classified as medio tiempo leaves, a high priming that is only found on some of a crop’s plants, and which are known for their distinctive strength and flavor. 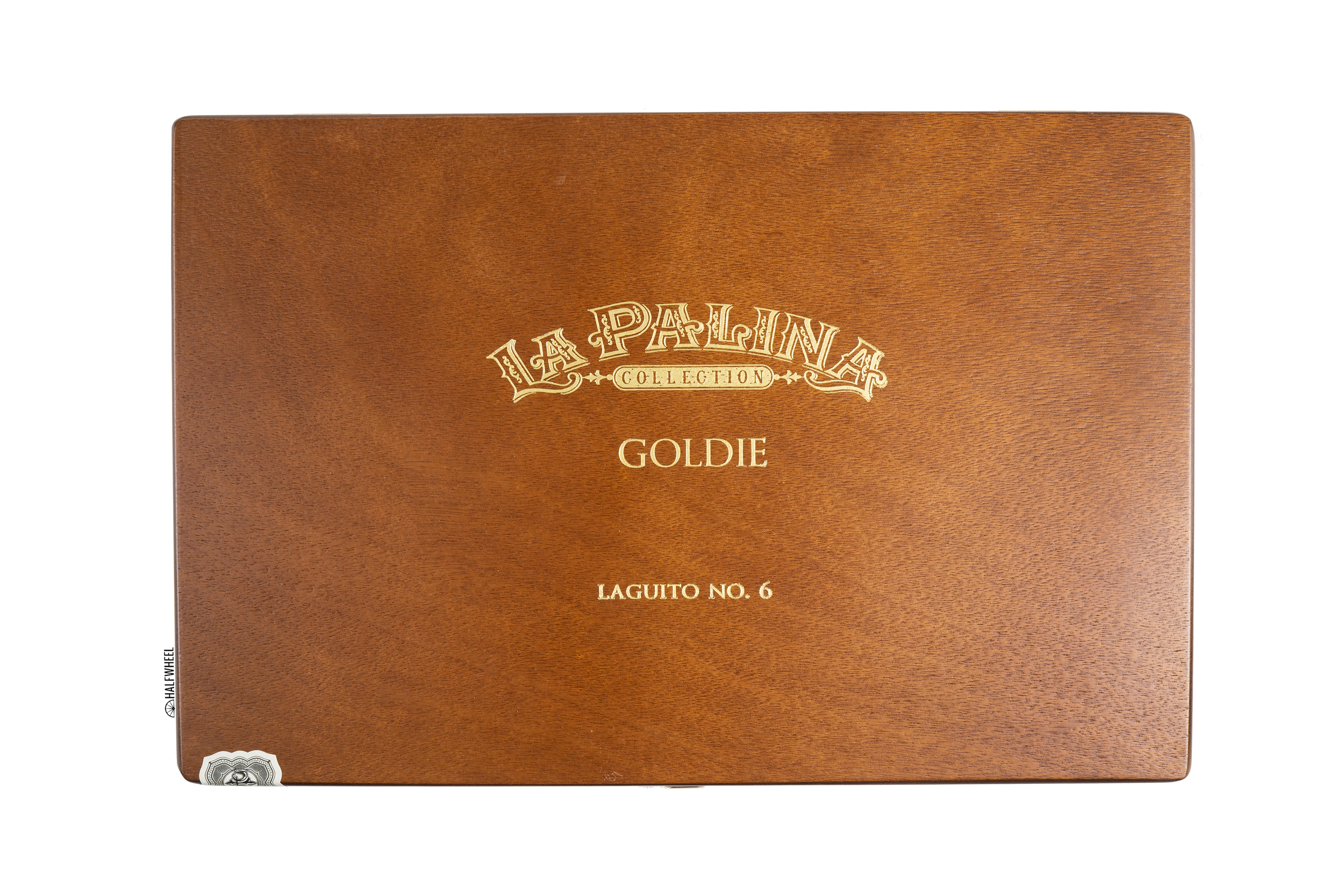 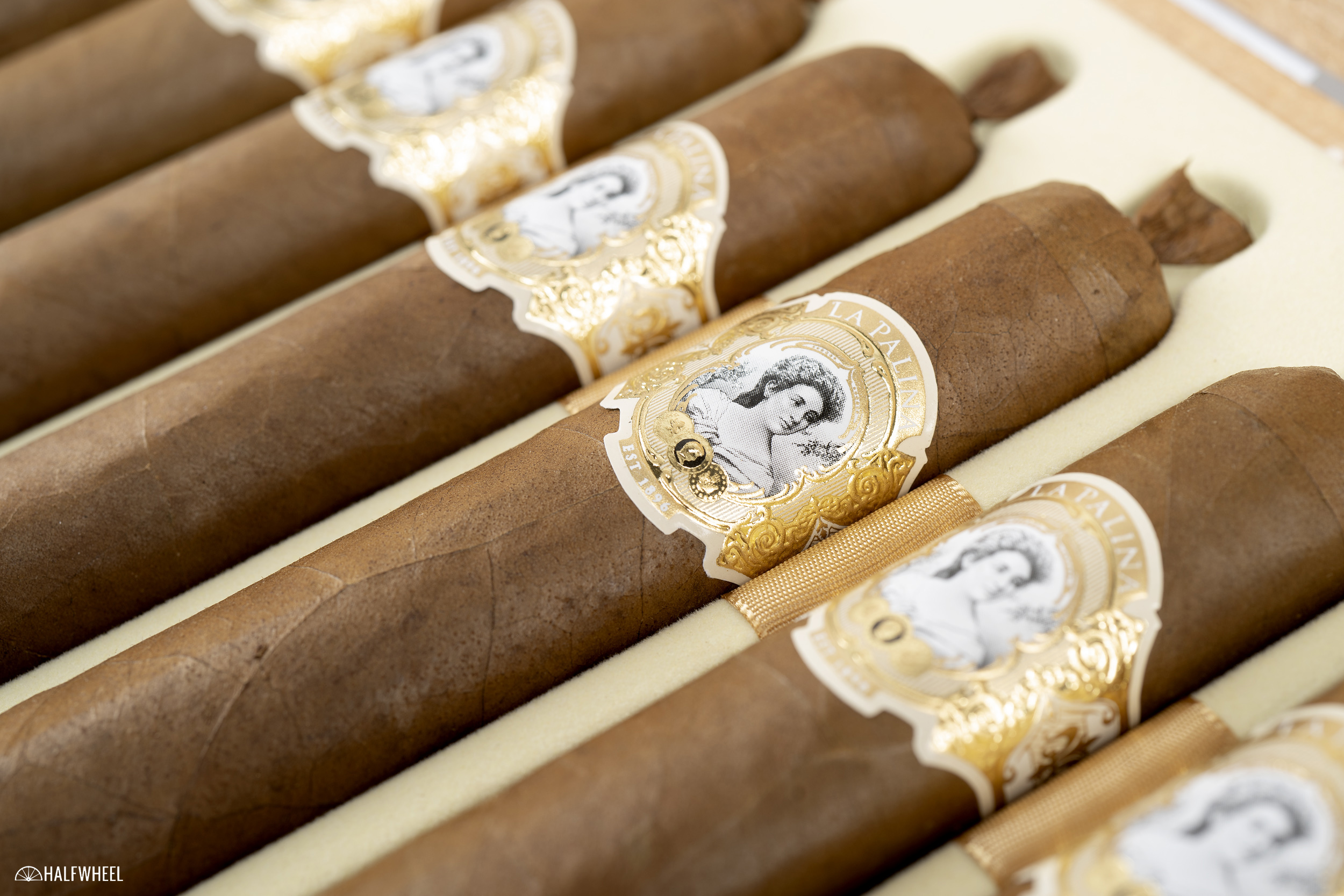 “This year’s Goldie is nothing short of spectacular,” said Bill Paley, owner of La Palina Cigars. “We are proud of what the Goldie series has become, as it is the apex of La Palina’s portfolio. We are truly humbled that so many people consider the Goldie series their favorite and most sought-after cigar.”

Paley created the line as a way to honor women in the cigar industry, naming it for his grandmother, Goldie Drell Paley. The line is made at El Titan de Bronze factory in Miami, Fla., which is owned by Sandy Cobas. 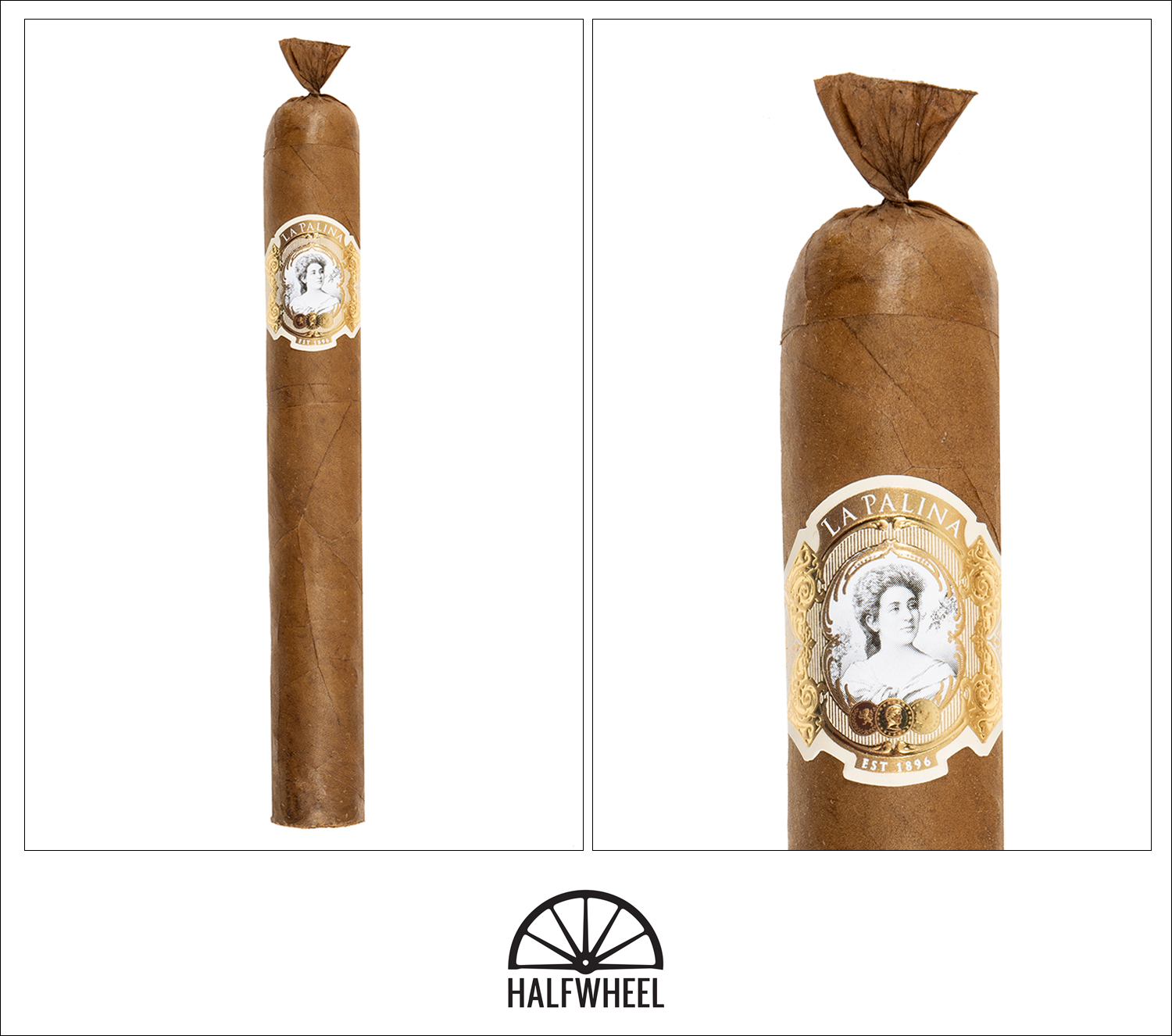 While I have always liked the appearance of the La Palina Goldie, it does feel a bit odd to see it in the bigger ring gauges, as the original 6 x 38 vitola will seemingly always be the one I associate with the line. As the thickest release in the line, and the second longest, it certainly stands out but still looks like the other Goldies I have enjoyed, almost like when a car gets an updated body style. The wrapper is well tanned and shiny, the fan tail on the head is prominent, there’s a bit of very fine texture to the leaf, and of course, it is rolled seemingly perfectly. It’s a firmly rolled cigar, one that I’m not going to challenge given the thinner wrapper. The foot has a light and slightly sweet aroma at first before a bit of pepper and dry tobacco leaves come along. I want to say it reminds me of banana bread but that seems a bit too obvious given what a signature flavor and aroma that has been throughout the releases. It almost reminds me a bit of a vanilla shake from In-N-Out, and while I know they use real ice cream in them, it doesn’t quite smell like what I equate with ice cream. The cold draw is open across all of the samples and much more neutral in flavor, offering a very light taste of tobacco leaves, but there is the occasional hint of banana.

I find myself taking a couple of quick puffs of the La Palina Goldie No. 6 right out of the gate, and two cigars greet me with a relatively light profile at first that builds in some dry wood and white pepper before the latter turns a bit heavier and picks up a bit of char to it. The other cigar skips that part and gets right into a light black pepper that is a few ticks more vibrant on the tongue. Either way, the cigars get to the same place fairly quickly, picking up a bit of toast as the profile turns into a bit of tingle throughout the mouth, though thankfully it doesn’t hit the throat. Retrohales have a good bit of white pepper as well and seem a bit more resistant to the change. After the first clump of ash drops, the white pepper returns to co-mingle with the black pepper, creating a fairly peppery cigar, while I find the body a bit thin in comparison. There’s still a bit of dry wood in the background, becoming more pronounced on the finish and thereafter as the moisture in my mouth seems to steadily dissipate. It’s a profile that is calling out for a proper beverage, though a bit of club soda will have to suffice. Flavor is a vibrant medium-plus, body is medium-minus, and strength feels a bit below medium as well, though the pepper makes me want to think otherwise. Technical performance is very good, highlighted by smoke production and a sharp burn line.

I’m a bit surprised by how dry the smoke of the La Palina Goldie No. 6 has been thus far, and while I readily admit that my memories may be off, I always thought the profile was a bit more lush. That said, it is still enjoyable and vibrant with a good amount of white pepper as the second third gets underway. The wood has lightened up a bit and is now a bit toastier, though the net effect on the palate is more or less the same. Creaminess tries to find a way into the equation at some points, though there simply doesn’t seem to be enough of it to make an appreciable difference. Just when it seems like it’s starting to make headway, it backs off and the cigar gets back to the drier profile with a mix of pepper and lumberyard wood. While this might not be the Goldie profile that I remember—or at least think I remember—it’s still plenty enjoyable with balance of the flavors. Retrohales offer a very clean and peppery experience which pairs very well with the flavor. Construction is very good, with the draw maybe a bit open if I focus on it but not loose enough to stand out. Combustion is great, smoke production is plentiful, and the burn line is even. Flavor is still a fairly vibrant medium-plus, body has caught up a bit, and strength isn’t quite at medium. The final third gets a bit smokier in flavor, an interesting shift that seems to be taking the profile away from where I both expect and want it go, though not to a place that is immediately bad. Not long after that happens, the flavor seems to recognize that it is getting off track and quickly circles back and introduces a bit of dry, light nuttiness. It’s a quick drive-by of that flavor before things get smoky once again, and while I’m not inherently in love with the profile, it is the most complex that the profile has tasted so far. What is becoming increasingly apparent is that the cigar doesn’t seem likely to pick up much sweetness, let alone any of the banana flavor that I have long associated with the Goldie blend. I’m inclined to think that it’s a casualty of the ring gauge, and is unfortunately be the one thing that I will remember missing when thinking back on this cigar. Flavor finishes at medium-plus, body is medium, and strength is medium-minus. Construction remains very good, with no cigar presenting any issue of note. The La Palina Goldie No. 6 is an interesting cigar for me; it’s still a Goldie and shows the remarkable balance that the line is known for, yet either this size seems to hamper the tobacco from showing the complexity and rich, lush flavors that have pushed other vitolas into elite territory, or the tobacco simply didn’t have it. I’m not sure which one it is, and while the cigars were fine, I’m not sure how many more I’d want to go smoke to see if what I think the cigar should have is out there and I just happened to get three that didn’t. While I’m not inherently crazy about this latest vitola, on the whole the La Palina Goldie line remains one of the better annual releases in recent memory, and I continue to look forward to what the next vitola will offer.