A few years back, Guillermo León did something lancero fans are always clamoring for and released a La Aurora 107 Lancero which Charlie Minato has written about extensively and reviewed. That same year at IPCPR 2010 it was announced that the 107 line was going to get a maduro wrapper. This past year year, the 107 Maduro line got a lancero added to their lineup in the form of a limited release called the La Aurora 107 Maduro Bowtie.

La Aurora 107 Maduro was announced shortly after the IPCPR 2010 trade show, although it took more than a year for the project to be shown off at publicly, at IPCPR 2011 and until November 2011 before anyone tried the cigar.

In November, Cigar King received a small amount of the Gran 107 with a maduro wrapper, a blend that ultimately was abandoned in favor of Connecticut broadleaf. That version, the production one that is now on the market, would not ship until April of last year before receiving a full launch at IPCPR 2013, almost four years after the project was first announced.

This is now the sixth 107 Maduro vitola:

*The Gran 107 was the original 107 Maduro blend, different from the regular production versions.

The boxes of the La Aurora 107 Maduro Lancero look like this: 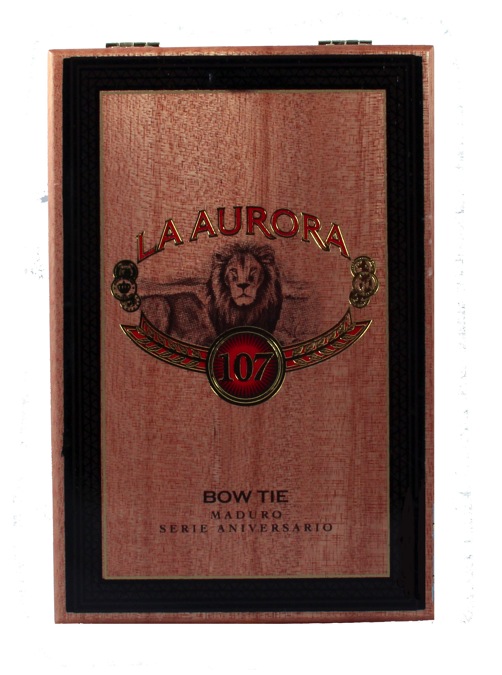 The wrapper is a very even dark brown color. While the wrapper is fairly tough, smooth, and slightly oily it is quite gnarly and bumpy underneath. There are a few soft spots throughout the cigar, though nothing significant. A strong aroma of cocoa and sweet hay come off the wrapper as soon as I remove it from the cellophane. The cold draw is an absolute blast of milk chocolate with a hint of coffee underneath.

The first few draws of the first third are sweet with notes that remind me of a dark pipe tobacco. Charred cedar, freshly ground coffee, cocoa and an overall sweetness round out the profile making a very rich start. The draw is ideal, giving just enough resistance without being too tight. The burn of the Bowtie Lancero is quite even and the ash is a bit flakey, starting to look like it wants to fall off after about a half an inch. Despite its thinner ring gauge there is plenty of smoke with a steady stream pouring off the foot long after I set it down. The overall sweet profile has died down slightly though the charred cedar, coffee and cocoa are still there with some black pepper I’m starting to taste on the back of my tongue. Second third of the La Aurora 107 Maduro Lancero sees the flavors getting a little muted, though they are still there. Not much change in the profile, though the black pepper has died down, the overall sweetness hasn’t returned. The burn has gone a little squirrely and required a few touch ups here and there, but after an inch calms back down again. All of a sudden out of nowhere a bright, sweet fruity note has appeared. With it the rest of the previous notes are all of a sudden back in full force. The final third continues much as the rest of the cigar. The same persistent and well fitting notes of cedar, coffee, cocoa and sweet fruit round out the profile. The burn has required a few touch ups again, but it hasn’t hindered the flavor. Having built up without me noticing, the Bowtie’s strength is medium to strong, though I wouldn’t have guessed that at the beginning. I’m able to smoke it down to the very end without any harsh notes hindering the last flavors. I've always enjoyed the La Aurora 107 Lancero, so I was excited to get a chance to review the maduro version. The profile had a sweetness that was present enough that my wife even mentioned to me that this cigar “smelled good - not like most of your others.” While not overly complex or changing, the notes fit together well. Despite a few burn issues and a slight lull in the middle, the Bowtie was an enjoyable cigar. There aren't many of these out there right now, and with the regional limitations it might be difficult to get your hands on them, but if you can I would pick up a box - it’s a solid smoke that I would be happy to have in my humidor.