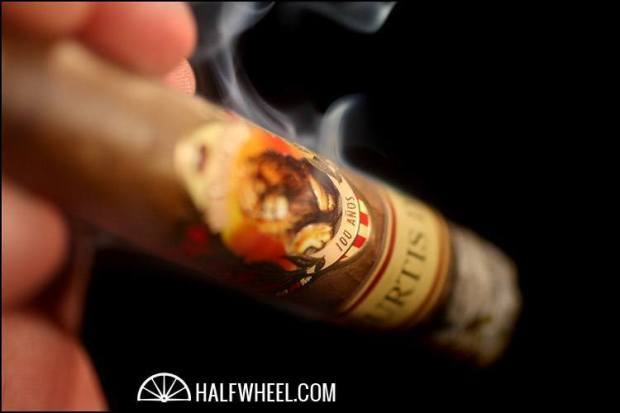 On April 13, 2012, La Aurora Cigars’ Guillermo León appeared for an event at W. Curtis Draper in Washington D.C. to celebrate Draper’s 125th year in business. To commemorate the occasion, La Aurara released a special cigar, a 5 x 50 Robusto in the 100 Años blend.

Miami Cigar & Company’s Facebook page showed off pictures of the second of the four scheduled 125th anniversary cigars for W. Curtis Draper scheduled to launch later this week. 2012 marks the fifth year in a row La Aurora has created a limited edition for W. Curtis Draper’s anniversary, this time a 5 x 50 Robusto in the Cien Años blend. There is no official word on what vintage the blend is from, other than the tobaccos are quite aged.

The cigar will launch on Friday (April 13, 2012) at W. Curtis Draper in Washington D.C. with Guillermo León, head of La Aurora on hand. On Saturday (April 14, 2012), the cigars will debut at W. Curtis Draper’s other location in Bethesda, MD. Both days will include free lunches for box customers.

While pricing is not finalized, it is expected to run $11-$12 per cigar with a slightly increased priced at Bethesda because of the higher tobacco tax. “The 100 Años was launched in 2003 to commemorate the centennial of the La Aurora factory,” said Guillermo León, owner of La Aurora. “It is a cigar made of 100% Dominican tobacco for experienced smokers.” There have been six vitolas in the La Aurora 100 Años line. They are: The 100 Años Robusto is an excellent looking specimen with a nearly flawless milk chocolate brown wrapper that is smooth to the touch. It has quite a bit of give when squeezed, but not so much that I think there is going to be a problem. The Dominican wrapper smells strongly of chocolate, cedar and hay with a little sweetness thrown in for good measure.

The 100 Años starts off the first third with a creamy profile, and immediate flavors of hay, chocolate, earth and a nice maple sweetness that really brings the profile together. There is some spice on the tongue and there is a small amount of black pepper noticeable, especially on the retrohale. Immediately, it begins to calm down almost immediately and by the end of the first third is nothing more than an afterthought. Construction is excellent with a near perfect draw and burn line. Strength is almost non-existent by the end of the first third, but does seem to be getting stronger. Coming into the second third of the 100 Años and the creamy profile is sticking around, as is the maple sweetness. The spice is almost totally gone by the halfway point, but there are also some different flavors compared to the first third including some leather and tart nuttiness that gains in strength as the second third comes to an end. Other notes of chocolate and coffee are noticeable, but not overly strong at any given point. Strength bumps up to a medium and the construction remains almost perfect. The final third sees the creaminess and sweetness that have been major players in the first two thirds recede a bit, although they are still definitely background notes. Other flavors get stronger, most notably coffee and leather, but I can still taste earth, hay and chocolate. The strength ends where I thought it would, a solid medium. Construction remains great till the end and I was easily able to nub the Cien Años without it getting hot. I was not in the least surprised to find out these specific cigars were from the original release back in 2004. These taste like a well-aged cigar with all of the characteristics that you expect to find therein: a smooth profile with a wonderful balance of strength and flavors. And while it does not come close to the complexity of the first W. Curtis Draper 125th release, the WCD 120 Redux, it is a very good cigar in its own right and definitely worth a box purchase. Having said that, there are two problems. First, the price is borderline outrageous for a Robusto. In addition, I honestly don't know how much longer they can age before losing too much more of it's profile considering that at this point, the wrapper is-12 years-old and the filler and binder are 16-years-old. Buy these to smoke, not to age.