The J. Fuego Origen line was something few knew about until last year’s IPCPR. Part of that no doubt has to do with the fact that the line wasn’t really a regular production line until last August. Okay, maybe most of it has to do with that fact. However, the introduction of the Originals last year seemed to really propel J. Fuego into a much different place. The unique packaging of the cheroot size was one piece of the puzzle, the other came from the awesome price and the cigar itself. Still, there’s a lot more than one size in the Origen line, including an El Laguito No. 1.

The Story
Brian Hewitt has been on the bandwagon since day one, maybe even day zero. However, J. Fuego is one of the brands that a lot pass up. Truth is, Jesus makes some damn good cigars, you don’t have to look much further than his most release, Sangre de Toro, to see that. However, may have just not been willing to give Fuego a try. I remember at the show, a sales associate quickly went down all that was new from Fuego, a Lancero was mentioned and it quickly went towards the top of my list of things to try after leaving New Orleans. Part of the reason? The blend. 100% Corojo with filler from Honduras and Nicaragua, a Costa Rican binder and a Brazilian wrapper; that’s a good start.

The Brazilian Corojo has an interesting tingle of red mixed with the dark brown hue. Veins are medium, severely magnified by the roll’s roughness. There’s a full aroma of chocolate, leather and cedar; not getting much better than that. Packing is light, which produces a relatively soft feel. From the foot, it’s chocolate, leather, bark with some spice; also teetering around full. 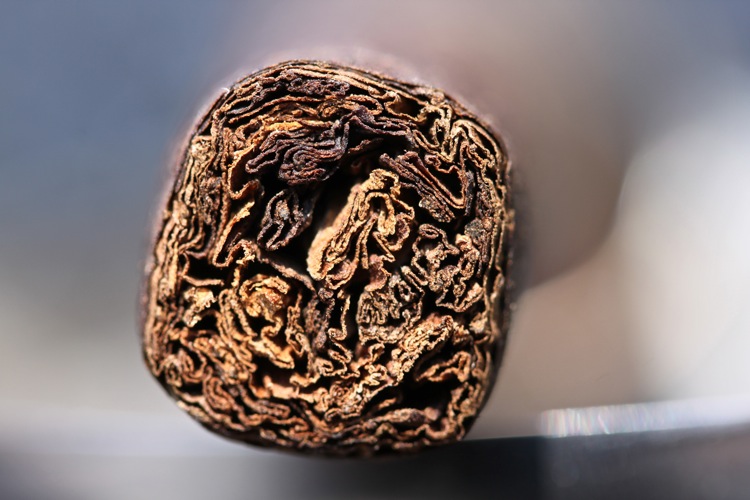 Lighting
Another V-Cut, I know. After the pigtail goes there’s a peculiar mixture of leather/cocoa and barnyard/meatiness. It’s a bit odd as the flavors are grouped in pairs, whatever the case, it’s quite good. Cold draw is wide open, not something found in most the Lanceros, but the Origen brings a host of flavors: toastiness, leather, dark fruits and bit of spice. It’s medium-full and rather balanced, a signature of J. Fuego. As the tiny foot warms, the Carolina air fills with a layered toastiness. It starts with sweet cocoa transforming into a sweet cedar, oak on tongue and spice on the throat. It closes with a lengthy medium-plus cedar finish. 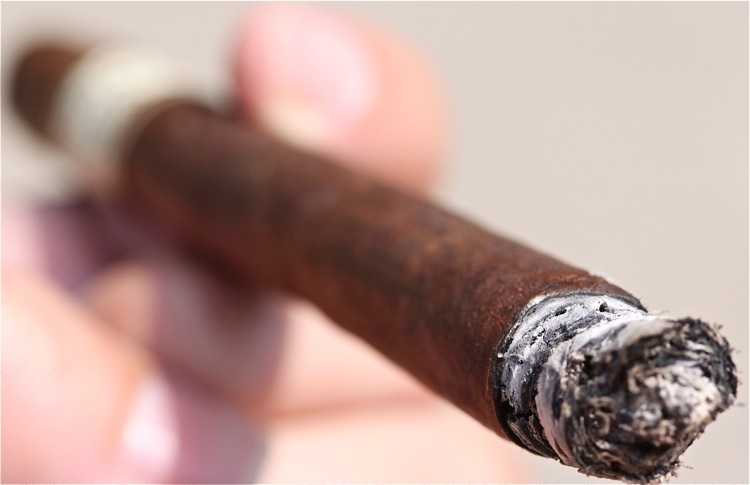 First Third
Leather, tobacco and cocoa with a bit of sourness; and full. The J. Fuego’s finish is a harsh cedar and cocoa with a bit of meatiness; full and medium. Strength is medium, body is close to full and the Origen’s draw remains open. Smoke production is good, with toastiness continuing to fill the Carolina air. The Dark Corojo ash holds for three-quarters of an inch before falling off in the ashtray. 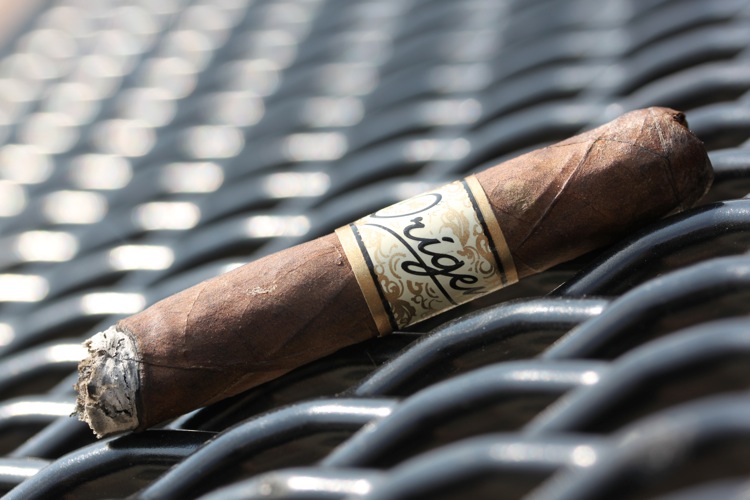 Second Third
Bitter woodsiness and acidic leather take over a slightly harsher profile with a heavy dose of black pepper rounding out the medium-full flavor profile. The Fuego’s long finish comprises of cedar, toastiness and acidic leather. Strength increases from medium to medium-plus, a pretty noticeable increase after two inches. Draw remains open, but that’s not the construction area to note. This cigar burns at an unbelievable pace, easily the fastest of any Lancero I’ve smoked. 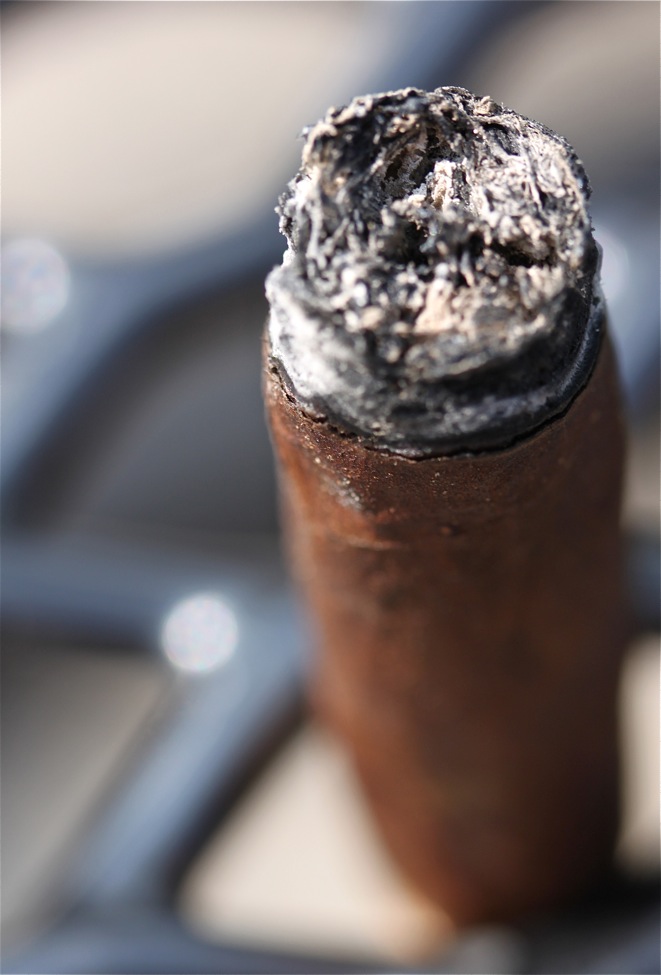 Final Third
There’s an earthy cedar mixture with a bit of sweetness and the pepper isolated to the retrohale. As expected Fuego’s Corojo is still spicy, quite spicy. The finish is dominated by pepper and cedar with espresso and leather making appearances. While strength and most of the construction aspects stay the same, but the body increases. After an hour and twenty minutes, I’m done, and shocked. 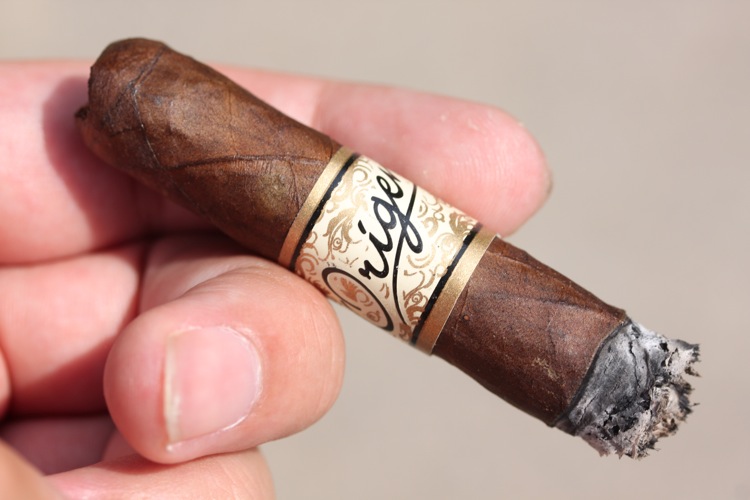 For the Novice
No. Corojo puros are likely not going to be a recommendation you’ll be making to new smokers and this is no different. It’s strong, spicy and packs a pretty heavy body. Jesus Fuego does make a line that’s a bit lighter, try the 777 Zero. I think the Lancero, perhaps due to its quickness, is a bit stronger than the rest of the line, but whatever the case the J. Fuego Origen line is too strong for those just starting, at least in my opinion. 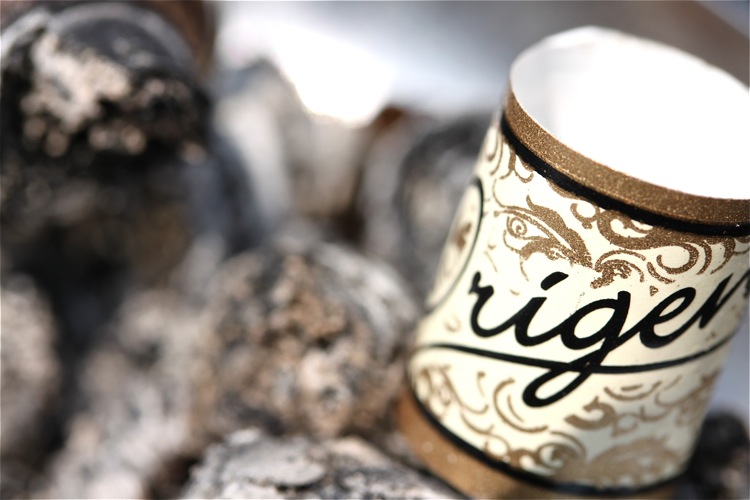 In the End
I’ve smoked five of these, I’m still not sure why they burn so quick. I’m not sure if this is widespread or if I’m just special, but it is a bit mysterious. I don’t really mind the speed, the flavor seems to be unaffected and the normal problems of harshness, draw (which is consistently openly/loose) and temperature all remain the same. The Originals is still my favorite format, as well as the Robusto; but the Lancero is a good buy, particularly at the price.

87. I had higher expectations, but I guess I can save them for the Sangre de Toro in El Laguito No. 1. Rumor mill.