Introduced in 2009 at the annual IPCPR Convention and Trade Show, the My Father Le Bijou 1922 line was the second core line for My Father Cigars, preceded by the original My Father line. This new cigar kept the same Nicaraguan binder and filler as the original My Father release, but used a Nicaraguan habano oscuro leaf in place of the original Ecuadorian wrapper grown from Habano seed. It debuted in just three sizes, a 7 x 50 Churchill, a 4 1/2 x 50 Petit Robusto and a 6 x 52 Toro.

The wrapper on the Le Bijou 1922 was particularly notable as it is known as pelo de oro, or golden hair, which is considered to be the father of the modern corojo wrapper. TobacconistUniversity.org explains that the name references a Cuban varietal that was popular in the early and middle 20th centuries but fell out of favor due to its susceptibility to disease. It was created by combining pelo de oro and Sumatran tobaccos and is regarded as being strong, flavorful and sweet.

The origins of the name also bear mentioning, as it seems to only occasionally get mentioned. Le Bijou is French for “the jewel,” and 1922 refers to the year that José “Pepín” García’s father was born. The original My Father line was created by Pepín’s son, Jaime, as a tribute to him. This second line was Pepín’s way of paying tribute to his father.

The line has since expanded to include a 5 5/8 x 55 Grand Robusto and 6 1/8 x 52 box-pressed Torpedo, as well as a number of store exclusive releases.

Federal Cigar in New Hampshire has been the recipient of the bulk of these store exclusives, which have often been offshoots of the original. For their 91st anniversary in 2012, the store received a pair of Le Bijou releases in a 6 1/2 x 42 Lonsdale vitola called Cervantes, one of which used an Ecuadorian Connecticut wrapper and the other of which used a Connecticut broadleaf maduro wrapper. In June 2012, they announced a pair of new store exclusive sizes with the Connecticut wrapper, a 5 5/8 Corona Gorda and 4 1/2 x 50 Petit Robusto, that would join the Cervantes as a trio to be known as the My Father Federal Le Bijou Connecticut Edition.

There was also a My Father Le Bijou 1922 Corona Gorda created as a store exclusive for Puff N’ Stuff in Decatur, Ga. in 2012. That same year Holt’s created a sampler with a 5 1/2 x 54 Robusto Especial vitola, and this year they added a  6 1/2 x 48 Short Churchill created for their Pepín Mania Sampler III in June.

In October, news surfaced of another store exclusive in the My Father Le Bijou 1922 line, a 5 x 50 Robusto being made for a sampler available exclusively for The Cigar Republic in Elmsford, N.Y. On October 12, the store held a birthday celebration for José “Pepín” García, with a nine-cigar sampler being offered to customers who attended the event. Also included in the sampler were three Flor de las Antillas Robustos and three Don Pepín García Original Robustos, both regular production cigars. 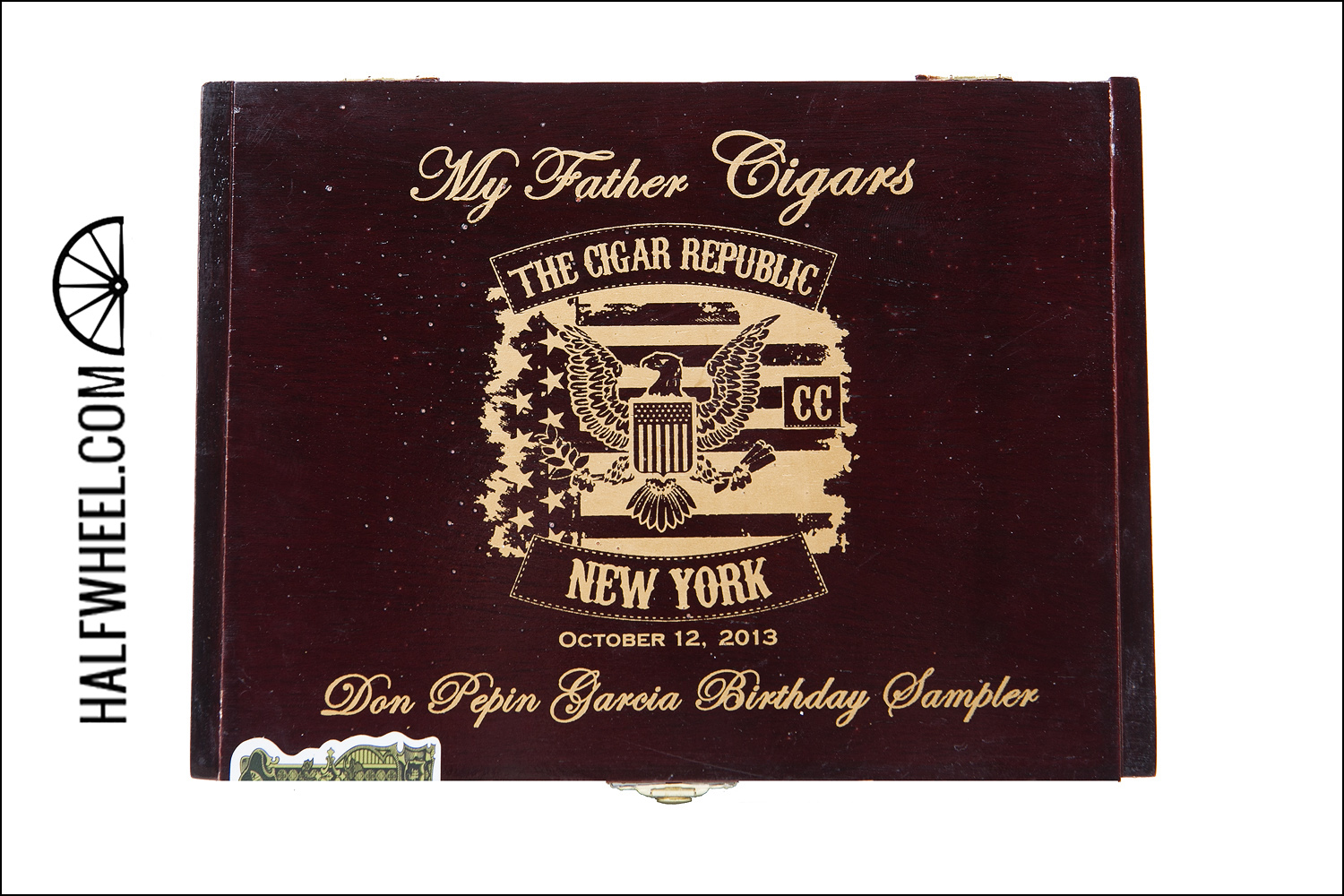 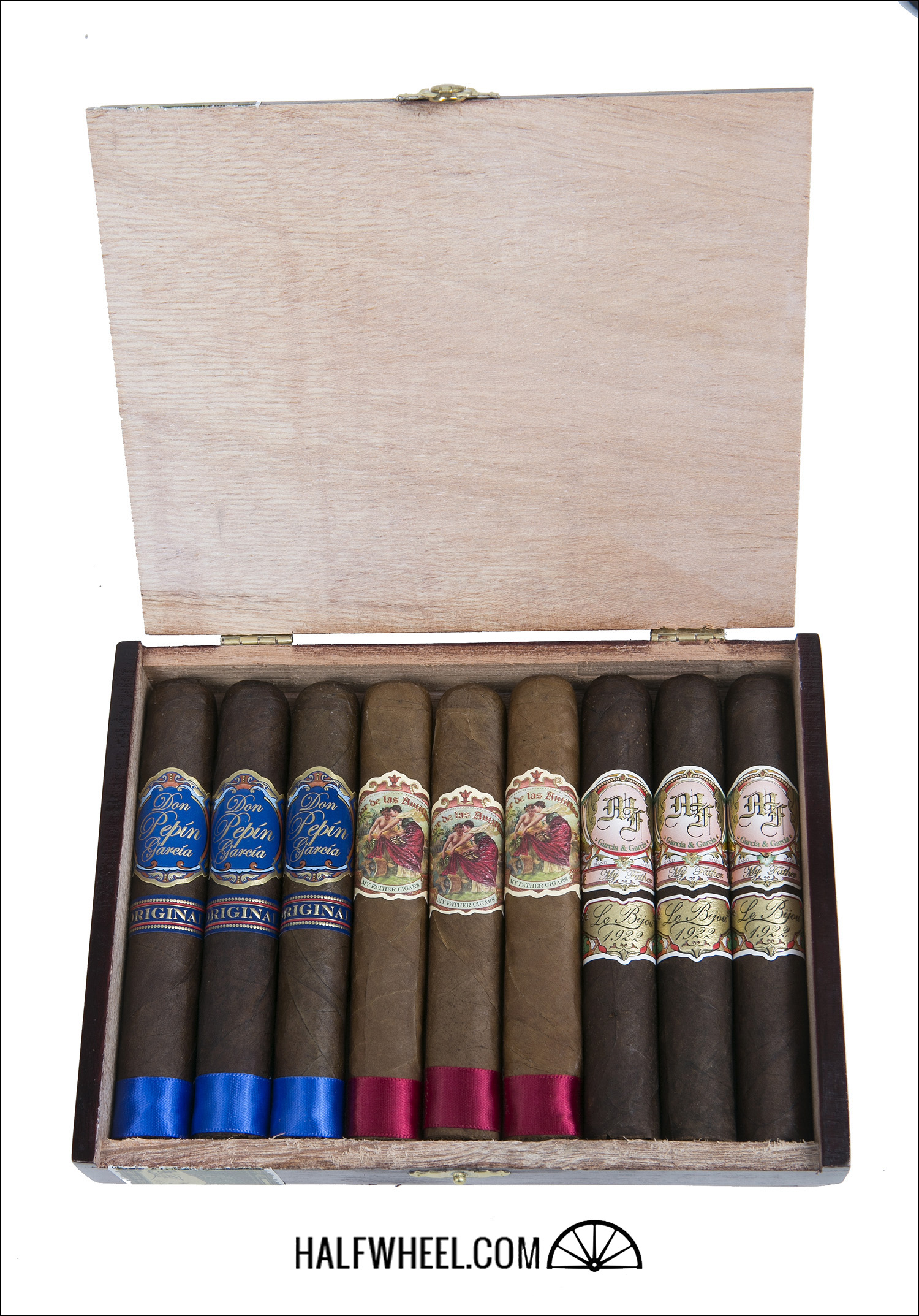 This is hardly the first release for The Cigar Republic, this is actually the third year when My Father has made a release for the store. The releases look like this: 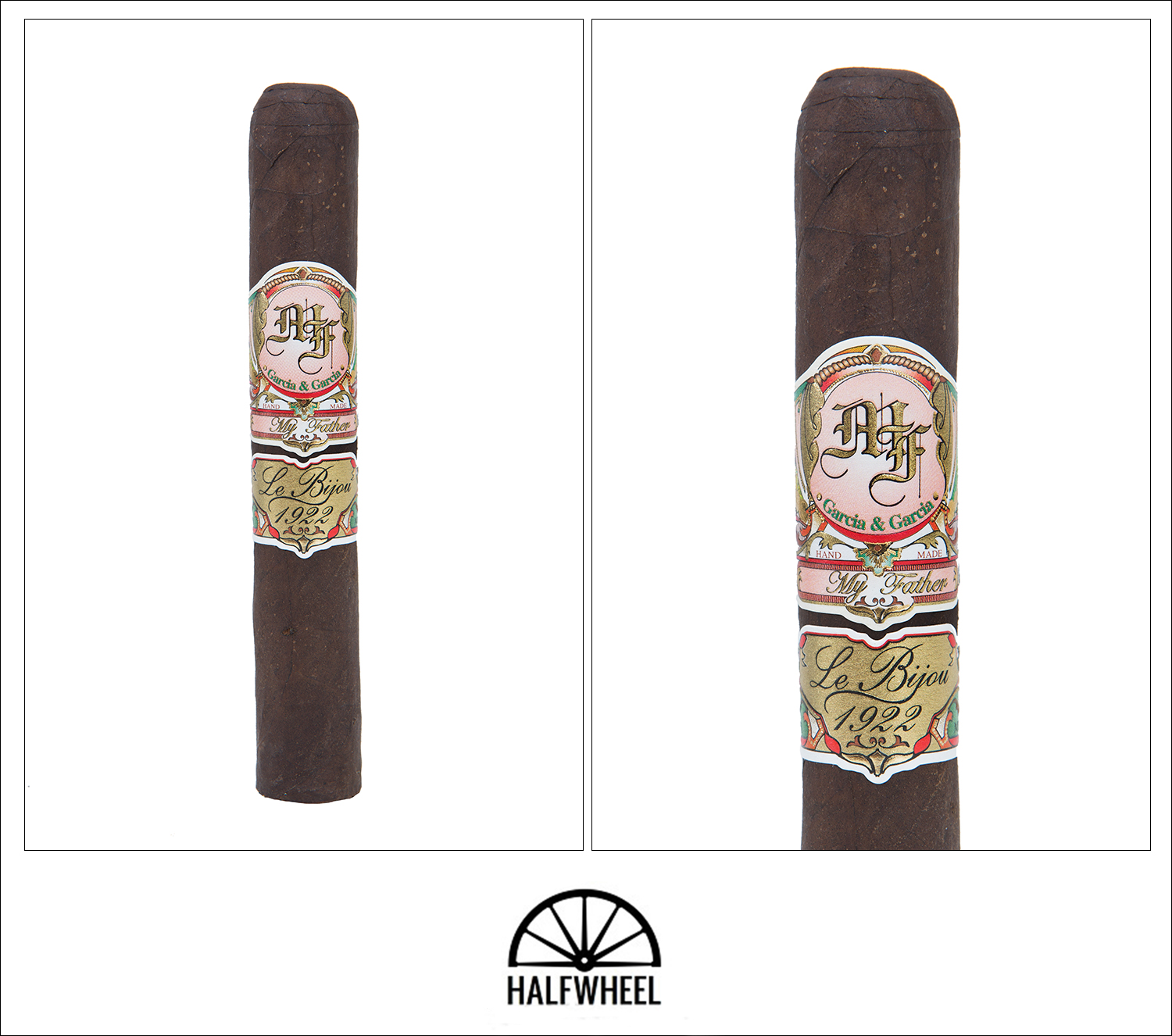 The wrapper has a fantastic dark brown color with just a bit of sheen that reminds me of coffee beans and leather, and while the veins are noticeable they’re not distracting, save for the largest vein on the cigar which was found on the backside of both sticks near the head, perfectly averted from view if you were to look at these in a box. As you can imagine with a double banded cigar, a good portion of the wrapper is covered up, but not so much that you can’t get a good look at it. The pre-light aromas are light and sweet, with a note of banana as the one that stood out most, while the cold draw is just the slightest bit firm, which is fine with me, and offers an interesting note of smoky molasses and just a touch of pepper.

There is a good amount of pepper in the first few puffs, though the signature Pepín blast isn’t quite as overwhelming as might be expected, at least until you get a few puffs in and the smoke has had a chance to work over your senses for a few minutes. It’s about half an inch in that the My Father Le Bijou 1922 hits its first winning combination, as the pepper, earth and just a touch of grilled meats come together to create an attention grabbing aroma. As expected, the burn line is sharp and even, smoke production is sufficient and air moves through the cigar with no issues whatsoever. When the first chunk of ash breaks off, an astonishing amount of pepper joins the smoke, filling the nose with a nostril-tingling sensation that reawakens the senses in preparation for the next section. 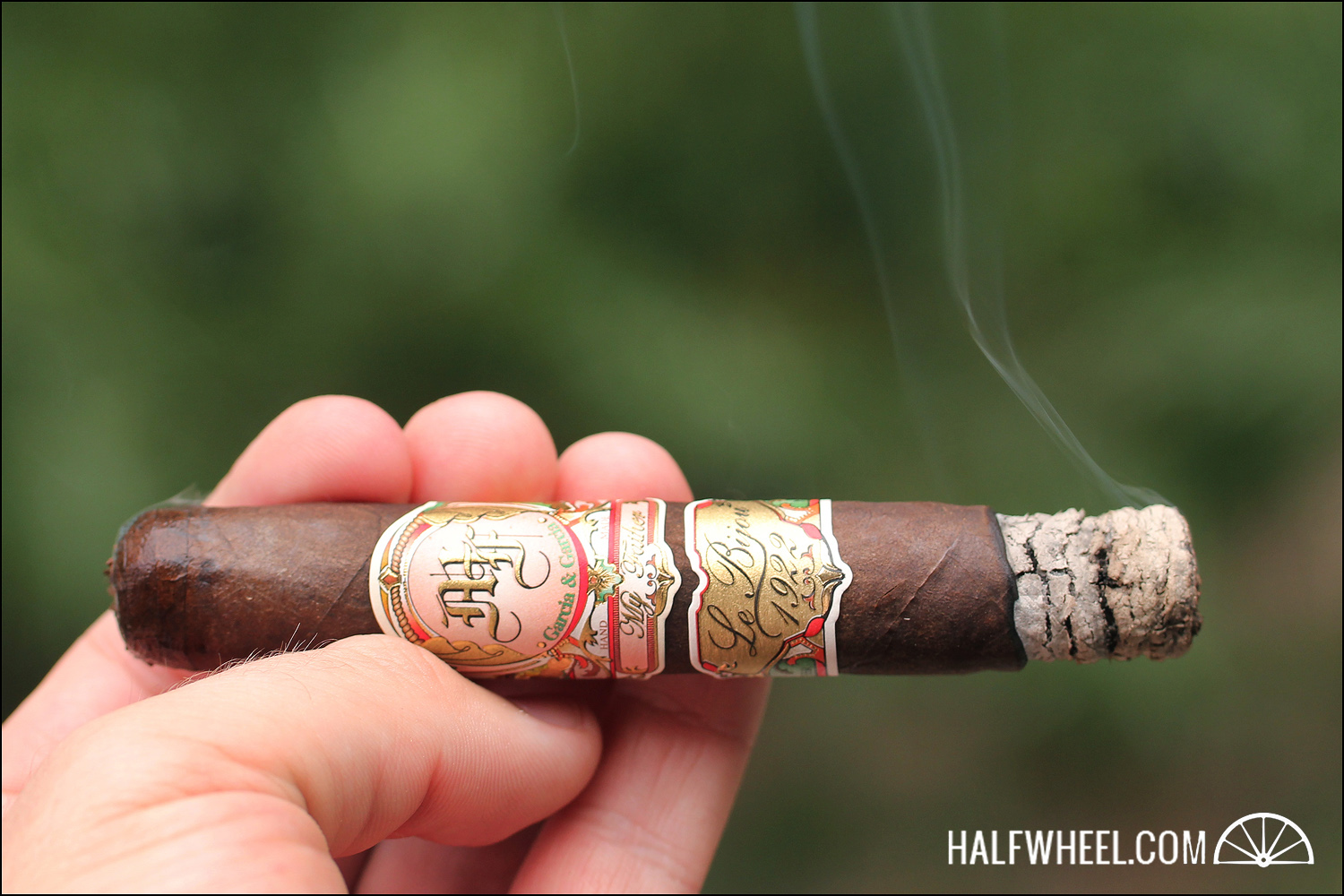 While pepper is the lead note carrying the My Father Le Bijou 1922 Robusto into the second third, the supporting and distinct notes of soil and its nutrients are readily apparent heading into the second half, and the bright white ash only reinforces that these leaves came from some well-cared for land. Notes of white pepper and chalk carry the cigar across its halfway point and prevent any halftime lull from occurring. An intense but fleeting note of sweetness starts to develop past the midpoint and is present on almost every puff after, delivering a syrupy, buttery note that is delicious though all too brief. 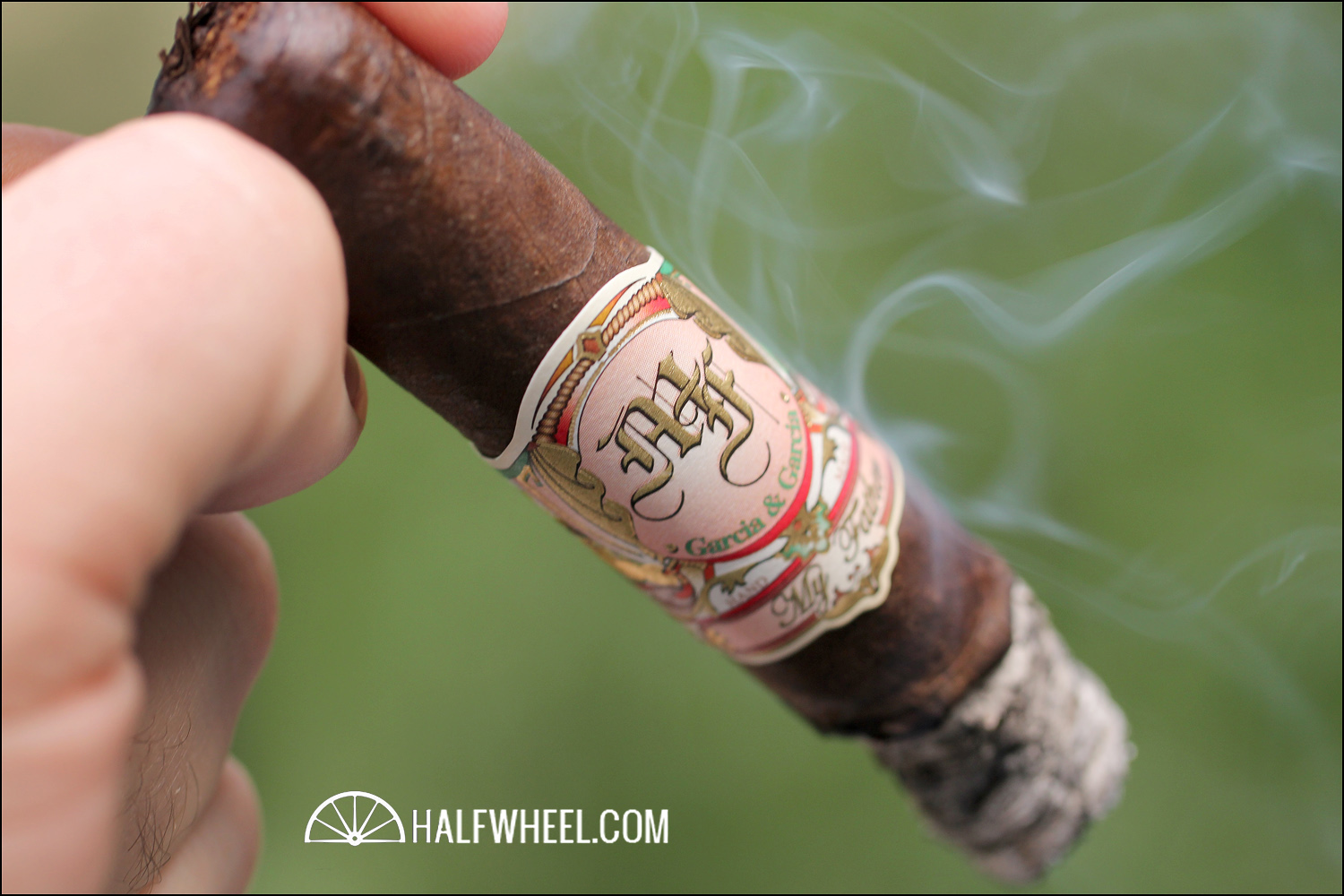 The sweetness found earlier has largely departed, though there are some remnants floating around in the background and providing a soft landing for the palate once the stronger notes of earth and pepper fade away. The earth and black pepper notes have returned, and now that the My Father Le Bijou 1922 Robusto is entrenched in its final third, it seems destined to leave with almost as much of a bang as it started with. While the flavor is not as upfront as it was earlier, it remains medium-plus all the way to the end, and with the solid construction still performing flawlessly, allows the cigar to be smoked as far down as time or your fingertips will allow. 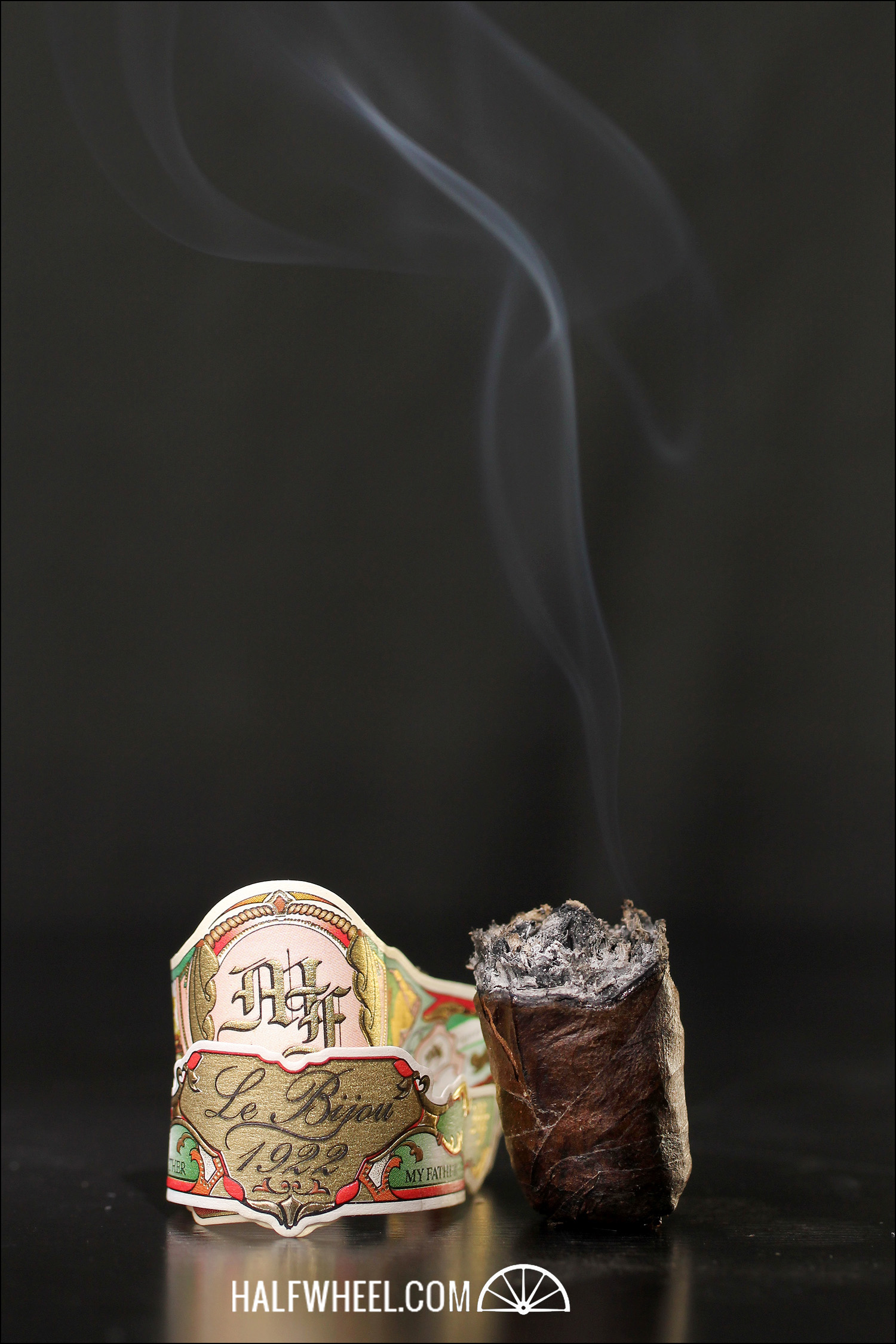 As one of its staple core lines, My Father Cigars clearly believes in the Le Bijou 1922 line and for good reason: it offers a sensory-engaging blend of pepper and earth with occasional notes of grilled meat and sweetness to soften it at just the right times. The question on this particular cigar is whether or not the Robusto vitola makes the blend sing as opposed to the rest of the sizes, and in particular, in comparison to the very similar Petit Robusto, which is just half an inch shorter. I don't think that's the case, but that's by no means a knock on the cigar. If anything, this limited production Robusto is a great reminder about how solid the My Father Le Bijou 1922 line is in whatever vitola you happen to find or prefer.