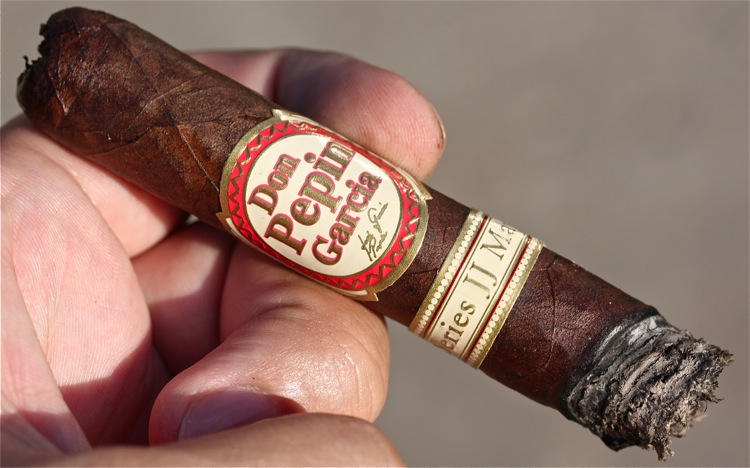 And it goes a little something like this… Two years after Pepín introduce the Series JJ, he added a Maduro. The line was first shown off at the 2007 rendition of the RTDA (now IPCPR) show. The idea? Take the Series JJ line and put Nicaraguan Corojo on it. What a damn great idea. The Series JJ Maduro Lancero has only been offered in the Lanceros Collection by Don Pepín García, making this rather rare. As for the regular line? For whatever reason, it doesn’t seem like the JJ Maduro has taken off, but that doesn’t mean the JJ Lancero can’t. My thoughts after the jump. The Story
Freud famously said, “sometimes a cigar is just a cigar.” That’s just not true with the Series JJ. I’m privileged each time I smoke one of the white-banded Pepín creations to have the opportunity to reflect on the preciousness of life and the many blessings I am given. Each time is a few moments to honor the life of someone I never knew, Jeremiah Cruz Jr. Many of you know Jerry Cruz, the fun and loving character at Stogie Review, and many of you know the story of JJ, his Little Robusto. Jeremiah Cruz Jr. was born on July 22, 2007, and three months later he tragically passed away of Sudden Infant Death Syndrome, commonly known as SIDS. You can read Jerry’s post from when his son was born, and about how he smoked his first Series JJ. Then you can read about how fragile life can be in Jerry’s “Final Goodbye” — and then you should take some time before you keep reading this review.

After reflection, you can learn about the immense good in the cigar community. Every year on July 22nd, the cigar smoking community gathers in support of Jerry and his family by smoking a Series JJ with him. The most recent year raised close to two thousand dollars for SIDS, and you can donate to the American SIDS Institute here. I was privileged to partake last year, and I look forward to honoring Jerry’s Little Robusto again this year. #jj4jj

When I first smoked this, I had no clue what Maduro was used. But on my notes, I wrote “Corojo” given the dark red nature, good guessing on my part I suppose. There are tiny veins that appearance more like cracks on the somewhat faded wrapper of the Series JJ Maduro. Aroma is a dark leather and cedar with a velvet like texture, right around full. Packing is above average with a slightly tight feel the touch. Aroma from the bottom of the Lancero is cedar, leather, dark nuts and an herbal spic; medium-full to full. 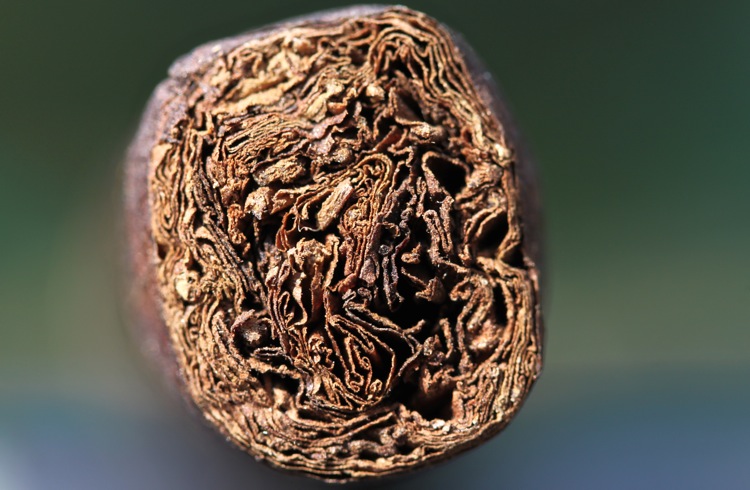 Lighting
Shocking, another v-cut. From the top of the JJ Maduro it’s leather, dark herbs, cedar and spices; right around medium-full creeping into full. Cold draw is a bit tight, but it’s still rather doable. Flavors consist of cocoa, leather, dark earth and herbs on the fuller side. Lighting the Tabacalera Cubanas creation produces a toasty and dark herbs mix that fills the sunny Carolina air, quite enjoyable. First draw: it starts with a dry cocoa that transitions into a cedary and cocoa mixture with herbs on the back of the throat. Finish of the Series JJ Maduro is medium-full and lengthy with cedar and oak dominating the profile. Pepper? Noticeably absent.

First Third
Contrast is the key word here. Dry cocoa, herbal spices, pepper on the retrohale and hints of some floral delicacies. It’s a complex first third, but at its core, the JJ Maduro is quite good. This continues to the full and averaged length finish which sees a spicy earth up front and then dry cocoa, herbs and grass underneath. Draw is right in the sweet spot allowing for a good amount of smoke production that translates into a dark tobacco and pepper aroma. The burn of the Tabacalera Cubanas creation is also quite good, with perfect inches of medium-dark ash forming.

Second Third
The pepper decides to come out and play, in a big way. All of a sudden spicy herbs towards the front of the mouth, an oak and grass core and black pepper that is a bit on the harsh side. The Series JJ Maduro Lancero is still full, but it’s a rather different signature than the first third. Oak and grass extend to the finish with black pepper and caramel contrasting the relatively earth-like profile. Just like the first third, the finish full in strength, medium in length. Draw tightens, but it has zero effect on smoke production and I’m able to keep smoking unfazed. Of the two of these I took notes for, this seemed to be a common trait, but after a bit of firming on the draw, it stopped well before it got into any problem areas. Strength dials up noticeably, going from medium-plus in the first third to solidly full in the middle portions of the cigar.

Final Third
It’s another fairly sharp turn as cocoa and toastiness join a sharp black pepper for the final portion of the Series JJ Maduro. It was a bit unexpected, but it was also a fairly welcomed change. Finish of the Lancero is now an earthy cocoa and leather combination with hints of the pepper remaining around. The rest of the Series JJ Maduro Lancero? The same. Same full body, same full strength and same great construction. With about an inch left, I say goodbye to the Maduro.

For the Novice
Nope. It’s the strongest cigar in the Holiday Sampler. Even if the nicotine wasn’t a problem, the flavor is rather complex and the pepper might be a bit intimidating. In the End
Going into this, the only cigar I hadn’t smoked was the Series JJ Maduro. In addition, I’ve had significantly more experience with the other lines (in other vitolas) than the JJ Maduro. So naturally this was the most intriguing cigar to try of the Holiday Sampler sampling. It performed how I thought it would for the most part: rather active, refined flavors, good construction and an overall enjoyable experience. There were however things that I was unable to predict, but for the most part this is what I thought I was paying for. The Series JJ Maduro Lancero is a good cigar, but it does lack a bit of the refinement that the Cuban Classic and Series JJ have. It does share the balance, which is key given the activeness and the types of flavors being dealt with.

I’d like a JJ Lancero before this, but I still wonder, why don’t we make more?