If there’s two things that pretty much everyone knows going into the 2013 IPCPR Convention and Trade Show, it’s that there will be things you knew you’d see and things that will catch you completely off guard. Some companies do a very good job at keeping their new releases under wraps until the trade show doors open, and other companies do an even better job about letting you know that they’ll even be at the show. The latter applies to Dissident Cigars.

The company didn’t have a booth at the show, but its presence was made known, albeit a bit on the quieter side of things. Every so often I would run into someone asking me or my halfwheel colleagues about this new line, and I really had nothing to tell them as I hadn’t received any information about them. There was some interest in them, but in a four-day stretch where new cigars are coming at you from all angles, it’s hard to get legitimately excited about a company you’ve never heard of.

Dissident released a pair of cigars, the Soapbox and the BLOC, which look like this:

As for the company, Charlie Minato provided some info about them in his review of the Soapbox:

The brand’s official stance is that its principals are “gweedo c” and “red_ryan.” Legally, the brand is owned in some part by Gorden Crippen of The Humidor Cigars & Lounge in Wichita, Kan., although Dissident was very clear that they are two completely separate businesses. While there was no booth, Dissident Cigars effectively launched at the 2013 IPCPR trade show.

The name Dissident was chosen for a very specific reason, as explained on the company’s website:

Gweedo C of Dissident Cigars was kind of enough to provide a thorough background on the name of the Bloc in a recent e-mail:

The BLOC story is interesting. We wanted to do something with the whole 8-bit design. We couldn’t figure out exactly how or what, but we knew we wanted to do it. So we had this whole concept as to design, then we started looking into the history of the 8-bit movement (besides our years and years of playing the video games). Sure enough, a WILDLY popular video game company from the early nineteen eighties did something very similar with their industry that we are trying to do with ours now. They raised the creative bar. Quality was high, but solidification of the industry was not there. They solidified a generation by doing things differently than any other company in its day, all the while following traditions and the expectations of their surroundings. They started out by not developing their own software, leaving it to approved third party developers, leaving them to focus primarily on the actual system that the software ran on; similar to our plan of using several different factories to create our products to our expectations and standards. Also, a BLOC could be a considered a group or crowd of people with similar thoughts on a specific subject, and BLOC is also a homophone with Block, meaning square, where the whole 8-bit thing comes into play. Oh yeah, and it’s box pressed. Mixed metaphors and all.

The Dissident BLOC comes in four sizes, all with names referencing video games:

Take a minute to look at the box Dissident BLOC. Remind you of anything? Maybe something relating to the 8-bit video game theme? Here’s a hint. 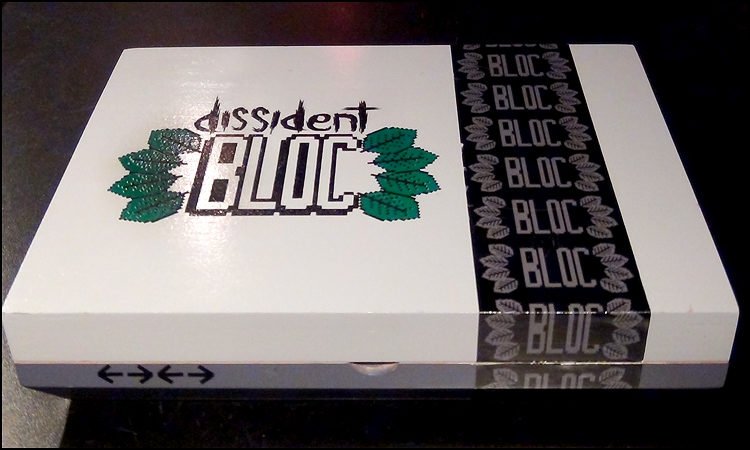 Just like with the Soapbox, the company isn’t disclosing which factory the BLOC is coming out of, because as Gweedo C explained:

We are not discussing which factory this comes from because well…who really cares? If the cigar is good, does it really matter where it’s made? We are transparent in the discussion of the blend components, but the preconceived notions (good or bad) about any factory can influence a persons thoughts on the quality of the cigar. I personally think any factory out there today can build an excellent cigar, as long as the components they are using to create it are excellent and their staff sufficiently trained. *Dissident Cigars expects to only have 100 of each size available this year, while the release date is still tentative.

The band on the Dissident BLOC has a great 8–bit graphics feel that plays in well with the BLOC theme: a pixelated and clean look that carries over to the blocky edges of the band that probably took more effort to create than I appreciate. There’s just the slightest bit of give to the box-pressed shape, another subtle nod to the cigar’s name. The wrapper is oily with a good amount of sheen, along with some toothiness and very small veins that give it a touch of texture. The color is a fairly uniform medium brown without much variation in shade. The BLOC’s pre-light aroma offers notes of graham cracker, caramel corn and toffee to provide a thick yet not overpowering sweetness, while a note of cherry and wood tag along with just a bit of pepper tucked away in the background. The air flow on the cold draw is a bit too easy, while the flavors aren’t as sweet and offer no pepper or spice, though there is a touch of tanginess that keeps it from being completely nondescript.

There’s a bit of tartness out of the gate on the first Dissident BLOC B_A I smoked, with good notes of cedar and damp lumberyard wood, with the spice coming along after about three-quarters of an inch. In It’s not a peppery spice, but rather a tangy spice to which I have a hard time attaching a better name. In the second cigar, the white pepper was much more upfront and the beginning was much more in my face.  The flavors start to back off just a bit and falls into a more neutral flavor profile, with a taste of oats standing out as the most distinctive. The ash isn’t the prettiest as it becomes chipped in spots, but it holds on very well. The smoke production is good, maybe a bit thin at times but not disappointing, while the burn line is good if just the slightest bit lopsided. A touch of spice comes back into the equation as the transition to the second third begins – again, it isn’t as much peppery as it is spicy, at times reminding me of a campfire fueled by a fragrant wood. The ash continues to hold on well before dropping off just after the picture was taken with notes of chalk and white pepper starting to emerge from the smoke, particularly as it hits the nose, and again much stronger in the second cigar than in the first one smoked for this review. There’s also a mineral note present in the second cigar that I hadn’t picked up earlier, and the ash seems significantly whiter than it did in the first cigar. The flavor picks up and the Dissident BLOC B_A becomes more of a mouthful, while the retrohale is mild enough to be accessible and enjoyable while still offering a bit of kick in the nostrils. It’s in the second third that I realize just how quickly the Dissident Bloc is burning, as it took me just over half an hour to get nearly halfway through it – this is coming from a self-professed slow smoker. The second third continues along with a very enjoyable woody aftertaste that lingers just long enough on the palate to keep from overstaying its welcome. There isn’t a pronounced change of flavors to signal the beginning of the final third of the Dissident BLOC B_A, as the pepper remains a small part of the equation with the slightly tangy wood notes leading the way. The strength stays at medium or just slightly above with very little nicotine kick. What strength the cigar offers is primarily found in the mouth through the bolder flavors. There’s no harshness to speak of, and just a fleeting touch of sourness creeps out at times in the final two inches. Other than that I feel like I smoked two similar cigars whose intensities in flavor, strength and body were notably different, I'm very impressed with this cigar after my first encounter with it. The tobacco was smooth, the cigars were flavorful and balanced, and the cigars performed very well from the technical side. Short of them burning a bit faster than I prefer, and the aforementioned issues with consistency, there really isn't a lot to complain about. However, consistency in flavor and strength go a long way in my book, so I'm a bit nervous as to what the full range of the Bloc might be. However, if I got the two extremes, I'd be quick to pick up a few more. Suffice to say, I think I'll be putting in another quarter for a rematch with the Dissident BLOC.