Since 2002, Camacho has released a yearly limited edition commemorating the freedom the Eiroa family, the company’s former owners, found in America. While a few releases have strayed from the pack, the vast majority of the cigars have shared the 11/18 Perfecto and a release size of 40,000 coffins annually. The first release in 2002 was limited to just 25,000 cigars spread evenly between five different vitolas. The original, along with the 2004 version, are the only two years when the company has released multiple sizes.

The 2013 incarnation of the Liberty series is the same 11/18 vitola, which measures 6 x 48/54/48, each packed with tissue paper in an individual coffin. The blend comprises of filler from the Dominican Republic, Honduras and Nicaragua, a Nicaraguan binder and is covered in a Habana 2000 wrapper.

Here is a breakdown of what was released:

Earlier this year, Davidoff—who purchased the Camacho brand from the Eiroa family five years ago—introduced its major revamp of the brand. This included some reblending of lines, deletions of lines, deletions of SKUs, new packaging, new price points, new branding, repositioning of staff, a new name for the factory and a new focus for the company. The Liberty 2013 is the first in the series to carry Camacho’s new bold branding, which means a contrasting black and natural wood box with the words “Freedom Isn’t Free” made rather obvious. 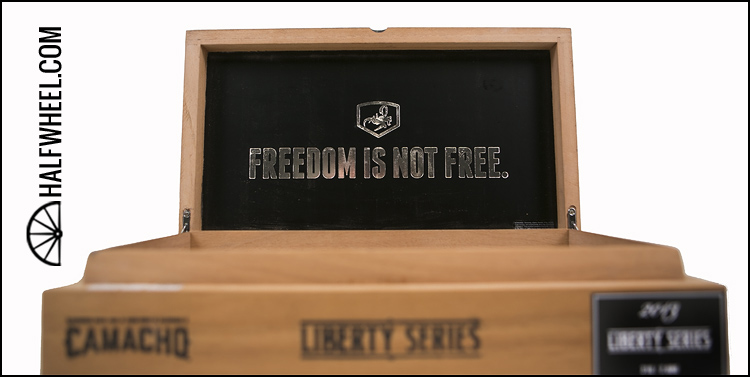 Here are what the coffins each Camacho Liberty 2013 come in look like: 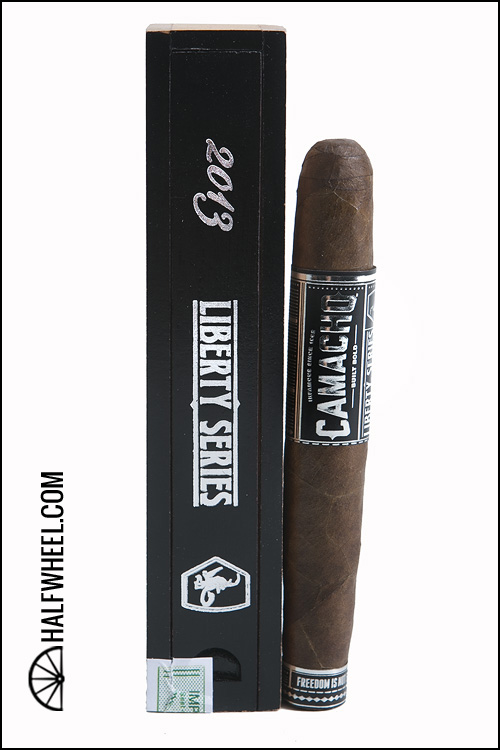 As I take off the tissue the cigar comes wrapped in, I am literally assaulted with a heavy scent that I can only describe as baker’s spices: basically, a combination of cinnamon, cumin and black pepper. The stark black and silver band contrast well with the dark mocha brown wrapper that has a bit of obvious tooth to it. There is a bit of give when the cigar is squeezed, and some noticeable oil on the wrapper as well.

The first third of the Camacho Liberty 2013 starts out with strong notes of bitter espresso, oak, creamy leather and dark chocolate, along with just a touch of cinnamon that comes and goes. There is an almost punishing amount of black pepper on the retrohale for the first 15 puffs or so which seems to recede a bit after that, but it is still a major part of the profile for the entire first third. I notice a bit of indistinct sweetness every now and then, but it is not strong enough at this point to identify fully. Construction-wise, the draw is excellent with just the right amount of resistance, and the burn is razor sharp. Smoke production is well above average, and the strength ends the first third firmly in the medium range. An extremely interesting combination of flavors comes to light during the second third of the Liberty 2013, namely strong notes of anise, cinnamon and milk chocolate that are dominant and quite distinct. Although they are dominant, other flavors of earth, creamy leather and coffee flit in and out as well, and the black pepper on the retrohale continues at about the same strength as the latter part of the first third. The sweetness I was noticing before has become a bit stronger on the finish, but is sadly still indistinct, while the smoke production shows no signs of letting up any time soon. The overall strength has not budged, and remains a solid medium while the burn and draw continue to impress. The final third of the Camacho Liberty 2013 seems to turn a bit bland in terms of the profile compared to the first two thirds, with less spice and flavors of milk chocolate, creamy leather, earth and espresso. Unfortunately, the sweetness does not amount to much by the end of the cigar, and the smoke production takes a major hit as well. There is also noticeably less black pepper on the retrohale and strength-wise, the Liberty 2013 never rises above the medium mark. Thankfully, the construction remains excellent until the end of the cigar, and I am easily able smoke until less than and inch without the nub getting hot. It was also around 2004 when Camacho Liberty Series cigars were said to contain pre-embargo Cuban tobacco that had been left over from DWG Cigar Company in Lima, Ohio. That company was purchased by American Cigar, who liquidated the inventory. Pedro Martin then sold that tobacco to Simon Camacho, who didn’t use it all, so when the Eiroas bought Camacho in 1995, they found the unused tobacco and set it aside for special projects such as the Liberty and Pre-Embargo 1962. Read the full interview where he discusses it here.

I really enjoyed the 2012 Liberty release, and was interested to see how the 2013 version would stack up, and I have to say, there are a lot of things to like about the newest incarnation. The flavors are fairly complex—albeit a bit bland in the final third—and both the burn and draw are excellent for the entire smoke. I was a bit surprised by the lack of strength, but it did not negatively impact the profile, and the construction was spot on for both samples. The 2012 release was better, but the Camacho Liberty 2013 is one I can definitely recommend picking up, if you are a fan of the Liberty series.