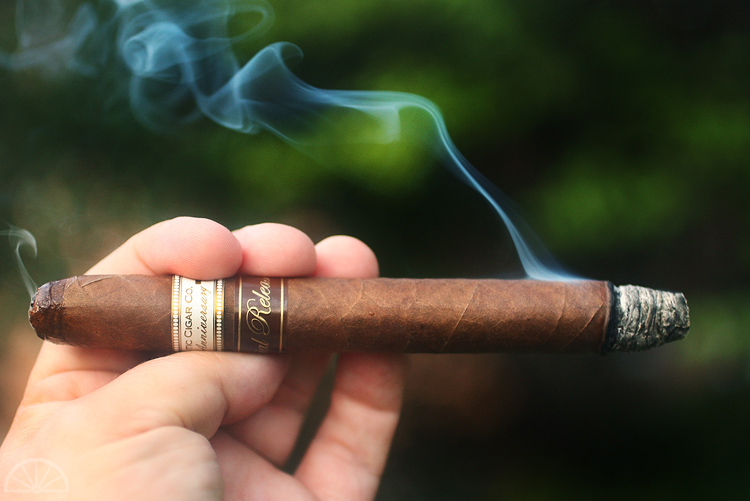 Back in October of 2012, Atlantic Cigar Co. released the fourth cigar in their series of cigars to celebrate their 15th year of business. Made by Oliva, it was a 6 3/4 x 48 Diadema comprised of an Ecuadorian Habano wrapper over Nicaraguan binder and filler, a blend allegedly never been sold to the public before. Only 400 boxes of 10 cigars were released and MSRP was $8.50 with boxes of 10 selling for $76.95.

Here is what I said in my original review almost exactly six months ago:

The Oliva Atlantic Cigar 15th Aniversario Diadema is a great looking cigar, with a dark mocha brown wrapper that is slightly toothy when rubbed. It has the perfect amount of resistance when squeezed, and the vitola is extremely distinctive. The aroma coming off of the wrapper is a combination of cinnamon, nutmeg, chocolate and hay.

The Oliva Atlantic Cigar 15th Aniversario Diadema starts out with immediate flavors of spicy oak, leather, earth and hay. There is some spice on the tongue as well as some noticeable black pepper on the retrohale that is quite strong for the entire first third. Around the start of the second third, the black pepper starts to dissipate noticeably and other flavors make their way to the forefront, including a wonderful creamy leather, sweet chocolate, espresso and a fleeting note of peppermint. A nice maple sweetness is evident throughout the second third as well and really sets the rest of the profile off. The final third turns even more creamy and a bit sweeter, while an interesting floral note replaces the peppermint from the second third, and there is less pepper on the retrohale as well. Overall construction is excellent with both the burn and the draw giving me not problems at all. Smoke production is well above average, and the ash stays on for more than an inch at a time. The strength starts out below the medium mark, and while it does increase slowly, I would put it just under the full mark by the time the cigar draws to an end.

I am not going to lie, this is a release I have been chomping at the bit to do a redux review on. As I mentioned in my original review, even a few days rest made a huge difference in the profile, and I purchased a box to sit on specifically to do a redux on. Interestingly, the flavors have not changed the way I anticipated, and it has a surprising amount of pepper on the retrohale in the first third considering it has been resting for six months. However, after the start of the second third, the profile really started gaining complexity, and continued that way until the end of the cigar. This is a steal at the price they are selling for now, especially by the box.