Back in November of 2011, Atlantic Cigar released the first of what they announced would eventually be four different cigars from four different manufacturers to celebrate their 15th year of business. The fourth and final cigar in the series is being produced by Oliva Family of Cigars and will be released for sale to the general public on Monday, October 15th.

We broke the story and published all of the details on the release earlier in the week:

After brainstorming with Oliva, we decided to come up with something completely new, a blend that they haven’t yet offered in a retail shop… The final blend is a cigar that delivers a good amount of strength yet achieves an excellent balance, allowing its flavors to emerge. The cigar has all the markings of an Oliva cigar, from its excellent construction with its flawless wrapper to its flavor profile of solid leather and varying wood notes, a good amount of spice with just a hint of sweetness. The Oliva Atlantic Cigar 15th Aniversario Diadema is the perfect way to close our 15th Anniversary collection. 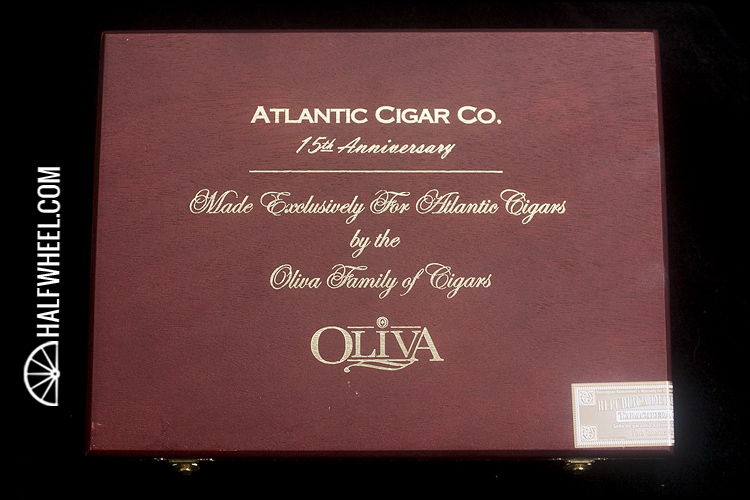 The cigar is a great size, feels great in the hand, and seems very well made. The wrapper is a nice cinnamon brown — slightly toothy to the touch — and has a great give when squeezed. The aroma coming from the wrapper is a combination of strong barnyard, hay, espresso and pepper.

The first third of the Oliva Atlantic Cigar 15th Aniversario Diadema starts out with strong notes of creamy oak, earth, slightly bitter espresso and strong black pepper on the retrohale. There is quite a bit of spice on the tongue right off the bat as well — stronger than I expected — and it does not die down much for the entirety of the first third. I also noticed quite a bit of cinnamon in the profile, but it ebbed and flowed throughout the first third, instead of staying at a constant level. The burn is phenomenal, but the draw is a bit tight, albeit not tight enough to really bother me in any significant way. Overall strength starts at a solid medium and only seems to be getting stronger.

Coming into the second third of the Oliva, and the profile is fairly consistent with the first third — notes of espresso, creamy oak, hay and earth. The black pepper on the retrohale has decreased noticeably, but is still strong enough to impact the flavors. The cinnamon note is also still present, but still not constant. There is a very nice sweetness in the background — and while it was not overly strong — I was able to place it as graham cracker. The major change is the overall strength, which takes a surprising and quick upturn around the halfway point, ending the second third firmly in the full category. Construction has become excellent with the draw loosening up nicely. The final third of the Oliva Atlantic Cigar 15th Aniversario Diadema has an increase in that graham cracker sweetness on the retrohale that I tasted in the second third, a wonderful addition to the profile. The notes of creamy oak, coffee, gritty earth, leather and cinnamon remain and the strength continues at a full level until the end of the smoke. Construction remains wonderful, both burn and draw, and it is an easy cigar to nub, never getting hot at the end.