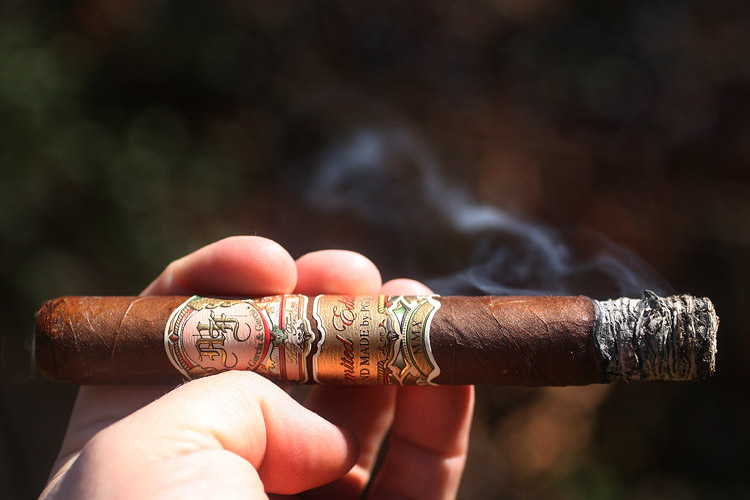 At the 2010 IPCPR show, My Father Cigars S.A. showed off a few cigars, but the star of the show was the My Father Limited Edition 2010, which was guarded behind velvet rope. Later that year, the company owned by the family of Don José “Pepín” García released 2,000 individually numbered boxes of 12 cigars, each in its own individual coffin. Making it more prized, My Father claimed that ever cigar was rolled by Pepín and bunched by his son Jaime García, president of My Father Cigars.

Here is some background info on the blend from the first review:

Reportedly, only Pepín has most of the information about the blend of this cigar and has kept most information about the creation a total secret, but there are some facts known. There are five different types of seeds, three of which are of Cuban origin, including two leaves of Pelo de Oro, a Spanish term meaning golden hair. All of the tobacco for the cigar is grown by Pepín, except for the wrapper, which is produced by the Oliva Family.

An interesting note on the Pelo de Oro tobacco: apparently, the production of this specific type of tobacco leaf has been banned in Cuba, mostly due to its propensity to become infested with blue mold. Pepín has mentioned publicly that while he loves how it tastes, the My Father Limited Edition 2010 will be the last time he produces the leaf, as it is so difficult to grow. However, the My Father Limited is not the only cigar of Pepín’s that the Pelo de Oro is used in, as it is also being used the 2009 release of the Tatuaje La Vérité as well.

And here is what I had to say in my Bottom Line section of the first review:

That is not going to happen.

Instead of nirvana, what I got was an overwhelmingly spicy, peppery and fairly one dimensional cigar that I would have hard time paying more than $8.00 for, never mind the $20.00+ these will command. Now, that is not to say that it was a horrible cigar, or unsmokable, at least in the first two thirds, as nothing could be further from the truth. I smoked two of them just to make sure I did not get a dud. But after the hype this cigar has produced, I was expecting quite a bit more balance, quite a bit more complexity, and quite a bit less harshness. I think quite a few people are going to go away thinking they should have spent their money on something different after smoking this cigar, if only because of the hype surrounding the release.

Like the samples I smoked for the first review, the cigar seems immaculate, both in construction and appearance. The My Father LE 2010 has a dark brown wrapper that is rough to the touch and still has a bit of oil on it. There are a few smaller veins present, but nothing overly distracting. The wrapper actually has very little smell to it, perhaps some sweet cedar and mild pepper, but not much else. It is perfect when squeezed and has the perfect amount of give.

The My Father Limited Edition 2010 starts out quite differently than the first time I reviewed it with a strong aged leather core, as opposed to the overwhelming black pepper that I got in the former sample. There is some black pepper in the background and retrohale, but actually less than I was expecting even considering the age. Other flavors of creamy cedar, earth, espresso and dark chocolate come out fast and stick around in various amounts throughout the smoke as well. You can feel the smoke coating  your mouth  like the soot that is left over from a fire (in a good way), which is an improvement over the first time I smoked these. 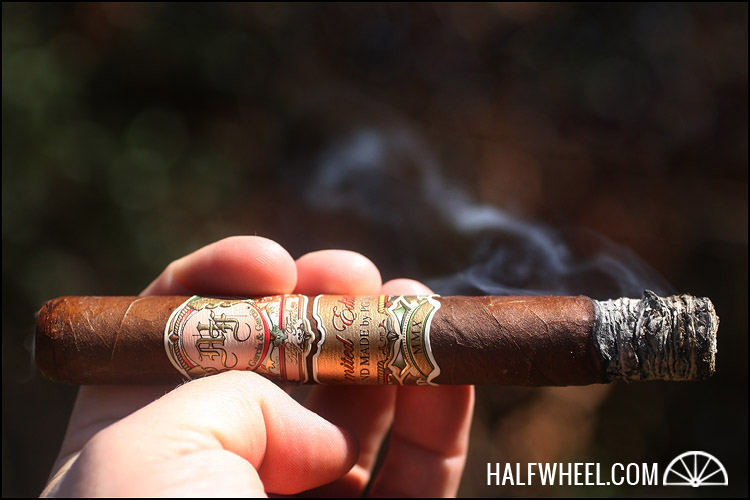 The second third of the My Father had much of the same flavors, but there’s a sweetness that crept in that is quite nice and really adds to the profile. Sadly, it is not strong enough to impact the flavors as much as I would like. Construction-wise, this is a joy to smoke, as expected (and with no stem!), draw and burn are perfect for the entirety of the Nicaraguan Toro. This is a big cigar and the final smoking time is right at two hours.

The Bottom Line: When I first reviewed this, I was shocked at how strong and overwhelming the black pepper was and how disparaging it was to the rest of the profile. Well, after smoking another one almost exactly a year and a half later, I can say that while the major flavors are much the same, it is also quite a bit more balanced overall, making it a better cigar overall. Are the My Father Limited better with more than a year of age on them? Without a doubt. However, it was still not as complex flavor wise as I expected (or hoped), and I honestly still do not think they live up to the hype that was around the release, or perhaps more importantly, the money that they were selling for.