In February of 2012, site sponsor Atlantic Cigar Co. released the second in their four part 15th Anniversary Series. Made by My Father, it was a box-pressed Robusto measuring 5 1/2 x 52 with an Ecuadorian Habano Criollo over a Nicaraguan binder and fillers. Only 400 boxes of 15 cigars were produced with singles priced at $8.00 and $111.95 for each box.

Outside of the No. 4 (Lancero), I have never been a huge fan of the My Father line in general, so I was a bit surprised at how much I liked the My Father Atlantic 15th Anniversary Robusto. I think the main reason I liked it is that it does not taste exactly like what I think of when I think of when I think “My Father” profile and for me, that is a good thing. Having said that, I was a bit annoyed at the somewhat muted flavors in the second third, although I am thinking that is due to the youth of the cigars. The construction and burn were fine, as was the draw after the first third, and the huge smoke production was a plus. This is an easy cigar to recommend, as I think the vast majority of people who smoke it will like it, but I would definitely try it before buying a box.

The My Father Atlantic Cigar Co. 15th Anniversary has a cinnamon brown wrapper that has a few veins present and is toothy to the touch. The triple cap looks to be perfectly applied and the box press seems to be less evident than the first time I reviewed it. The cigar is very hard when squeezed, but does have just a bit of give. Aroma off the wrapper is earth, manure and cedar.

The My Father Atlantic Cigar Co. 15th Anniversary Box-Pressed Robusto starts out strong with distinct flavors of oak, cinnamon, leather and earth. There is a nice amount of spice on the retrohale and I can taste a great maple sweetness trying to break through in the background, but it stays in the background for much of the smoke playing second fiddle to the rest of the profile. The flavors shift about halfway through and the cigar becomes quite a bit more creamy and sweet with the sweetness morphing into more of a fruity note and the pepper becoming quite a bit more pronounced as well. There is some nice pepper on the retrohale until the end of the smokeas well replacing the spice that was present in the first half. 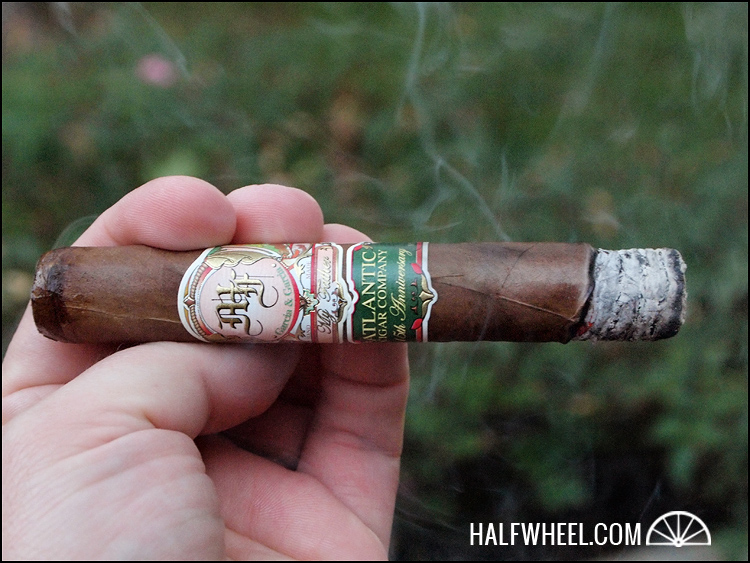 Unlike the first first samples I smoked for the original review, the draw is perfect on this sample, the burn never gives me any problems whatsoever and the ash stays on for more than one third of the cigar before falling for the first time. The smoke is plentiful, billowy and smells wonderful reminding me of sweet wood. Strength starts out at a mild medium and ends the cigar well above that point, but never threatens the full mark.

One of my biggest complaints about this release when I first smoked it was the fact that the flavors seemed to become mushy in the second third and after a little more than six months that issue has been resolved with flying colors. The flavors are distinct throughout the smoke and easy to enjoy. The blend still falls short of the best that Garcías have to offer, but it is a very good cigar, well worth buying if you like the My Father profile and I think that they will continue to get even better with a little more age.