The latest batch of the Punch Rare Corojo has shipped.

Pennsylvania-based Atlantic Cigar Co. announced that it had received this year’s cigar including the Punch Rare Corojo 2016 Limited Edition Regalias Perfecto, a 7 1/4 x 54 perfecto that is new for this year. According to a press release issued by General Cigar Co., MSRP on the new size is $7.99, before taxes, with the cigar packed in 10-count boxes.

For the last few years, General Cigar Co. has released a new size as a limited edition each year, but with this year’s new addition comes a deletion, as the Double Corona (6 3/4 x 48) will be retired once this year’s allotment has been depleted.

The Punch Rare Corojo uses an Ecuadorian Sumatra wrapper over a Connecticut broadleaf binder and filler tobaccos from the Dominican Republic, Honduras and Nicaragua. This year’s collection comes in a total of nine sizes and is produced at STG Danlí in Honduras. 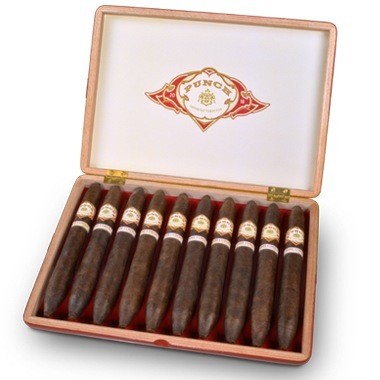 Update (Feb. 17, 2016) — General Cigar Co. issued a press release today about the 2016 Punch Rare Corojo, and information about the cigar has been added to this story, including MSRP and box count information, as well as the deletion of the Double Corona size. This story was originally published on Feb. 1, 2016.