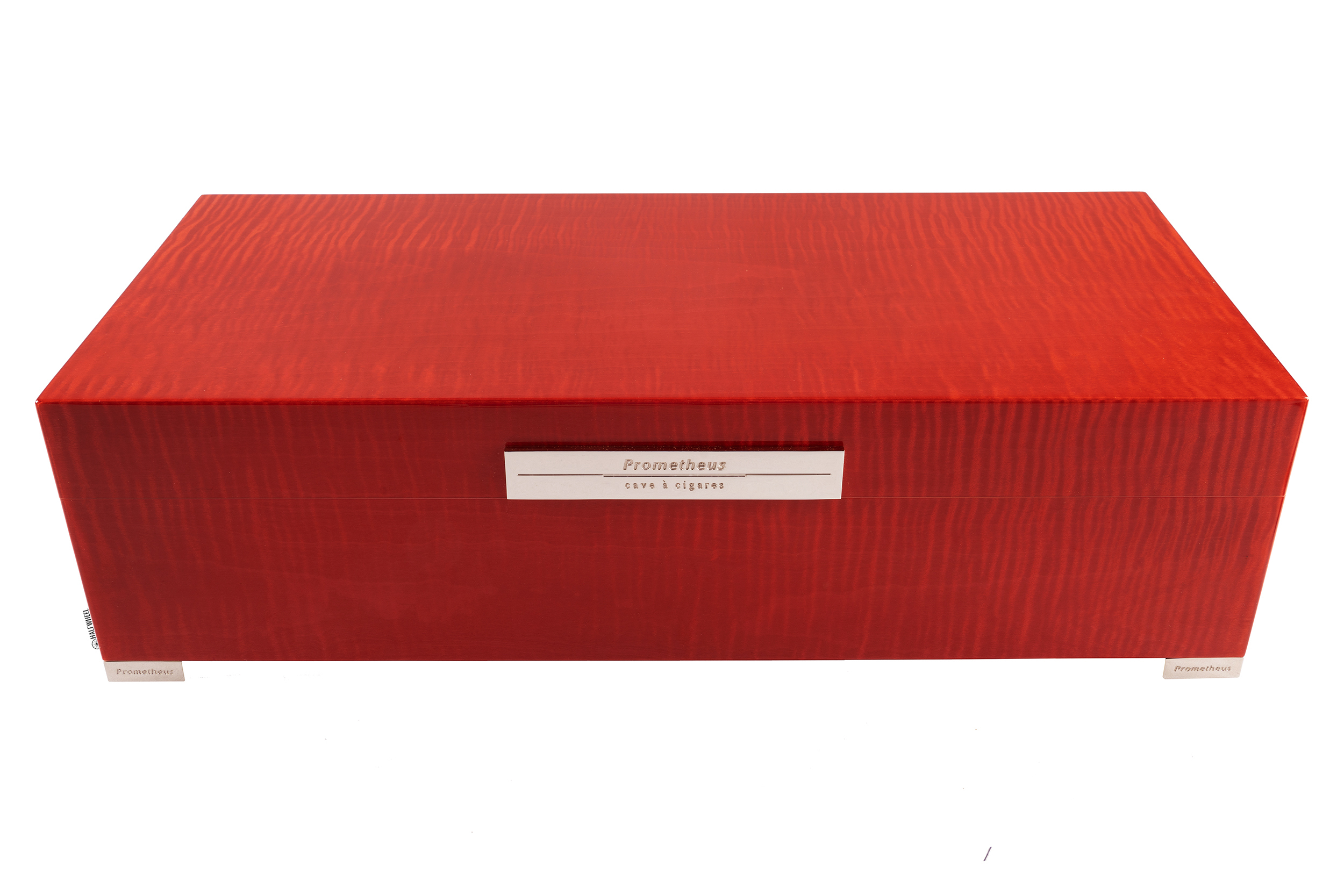 This is the second of what might end up being a series of high-end desktop humidor reviews. Over the years, I’ve gawked at Prometheus’ humidors in various places, whether at trade shows or when I see them in offices. So I knew that if we were going to do a high-end humidor series, I wanted to include Prometheus.

Prometheus has sold a lot of different humidors over the years, especially if you include the ones released through Fuente Aged Selection, a joint project between the company and Arturo Fuente. These have ranged from boxes that are promoted as travel humidors to models like the one being reviewed today and even to more elaborate cabinet-style humidors. It also has the Milano and Octagon Series, which are the company’s two more affordable lines of desktop humidors. 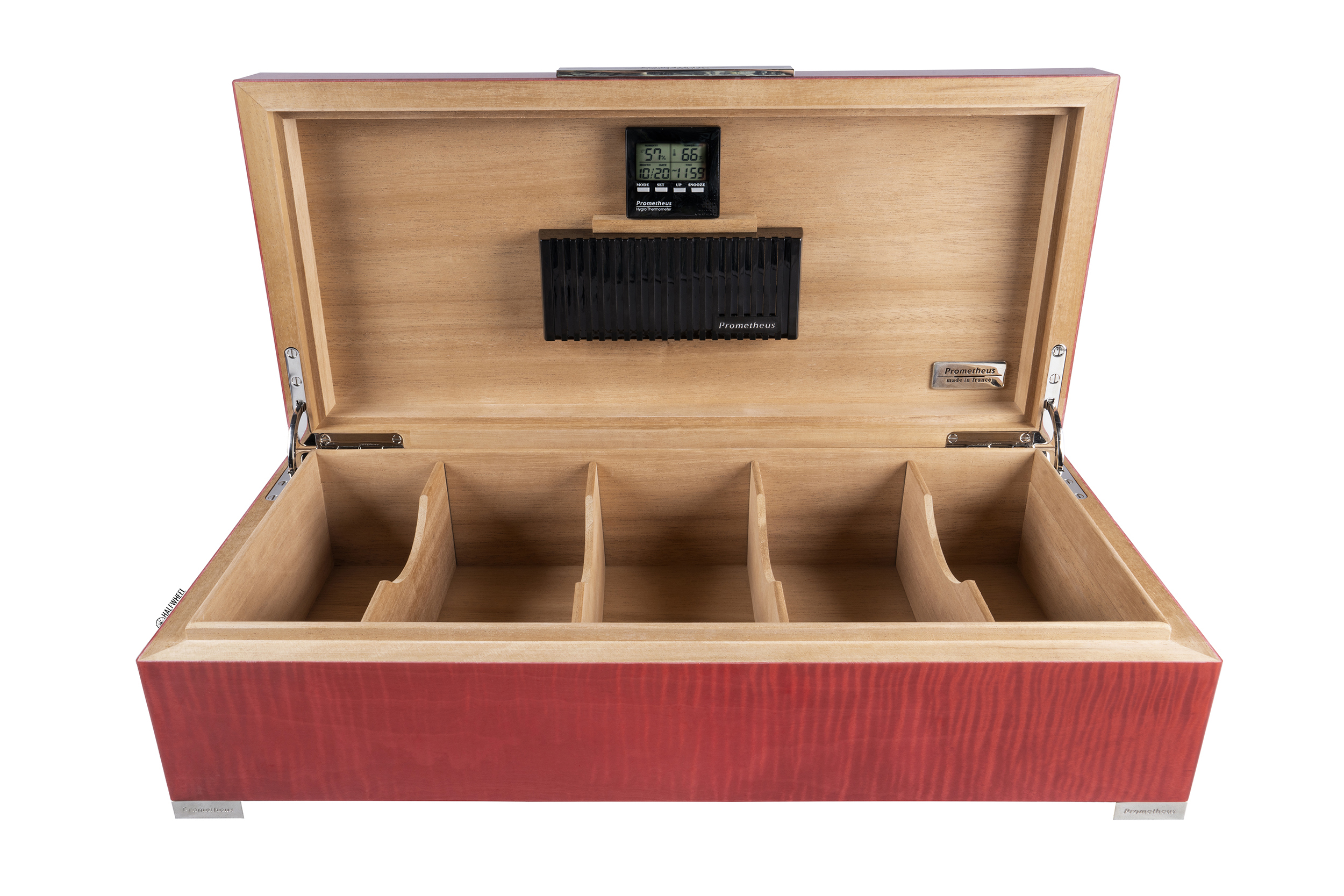 Both Prometheus and I describe the Platinum Series as the company’s “flagship” offering, but it’s also sort of the standard model. Many of those Fuente Aged Selection or other limited edition Prometheus humidors appear to be modified versions of the Platinum Series. It’s a very wide desktop humidor that measures 20 inches x 9.25 x 5.75. There are currently five different finishes offered, but Prometheus has made the aforementioned limited edition versions in other finishes. One peculiar thing about those limited edition versions is that they tend to incorporate some sort of lock and key, something that isn’t present on the standard versions of the humidor.

The humidors are made in France, which is similar to both Elie Bleu and Davidoff—what I would consider the two direct competitors to Prometheus, especially here in the American market. Each humidor comes with a Prometheus Hygro 3 digital hygrometer, which measures both relative humidity and temperature, has a date/time display and even an alarm function. The 150 model comes with a single Prometheus Optima humidifier whereas the 200 comes with two Optima humidifiers. Both the hygrometer and humidifier(s) are detachable via preinstalled magnets. I measured the humidor to be 18.25 inches x 7.5 x 4.375 on the inside for a total of 598.8 cubic inches of interior volume. That doesn’t take into account any lost space for things like the humidifier or hygrometer.

Per Humidor Discount’s Humidor Calculator, this is good for 128 robusto cigars. This may be more “unique” than “special,” but this is one of the few desktop humidor models that is elevated thanks to the use of four brass feet. I’m not sure this provides any functional benefits, but it does provide a more luxurious feel. 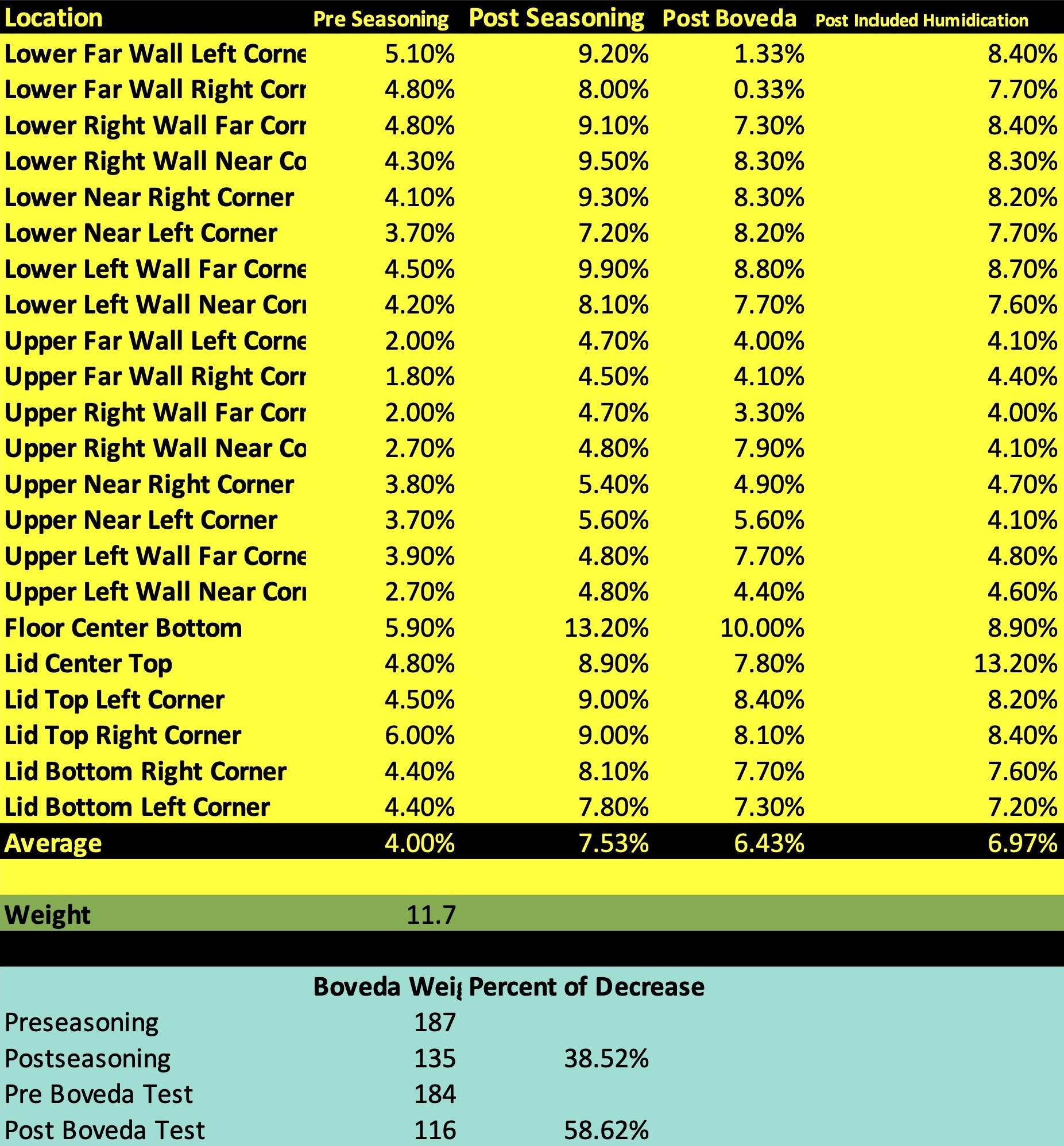 After having some issues with the previous series of humidor reviews, I made some revisions to how humidors are tested. First, I am now using two SensorPush devices per humidor to try to overcome any issues where one of the SensorPush devices fails or runs out of battery.

Second, the process that each humidor goes through has been modified.

During each of these steps—with the exception of the optional refill during the included humidifier part—the humidors are closed. The only times a humidor is opened are when I’m moving from one step to another and need to switch out the humidification elements and use the moisture meter. In addition, the humidors are pretty much empty during these tests. Inside there are the two SensorPush devices, the humidification element(s) and the included dividers and/or trays, but no cigars or anything else.

I finally got Boveda to give me a more precise way to determine how many Boveda packs each humidor should receive. In short, I’m told that for every 200 cubic inches of volume, you should use one 60-gram pack and to round up to the nearest 200 cubic inches. For this humidor, I am using three packs for both the seasoning and testing processes.

The results of some of this testing are above. For this humidor, there was only one seasoning process and no reasoning was required. Prometheus says that once the humidor has reached 70 percent relative humidity, it’s ready for cigars to be placed inside of it. I didn’t follow those instructions, but the humidor seemed in a good place after two weeks of seasoning. As shown in the chart above, the seasoning nearly doubled the moisture meter readings. This shows just 30 days of performance, the same length of time I did with the Elie Bleu. The Prometheus Platinum Series did pretty well but not as well as the Elie Bleu and the Bovedas were getting close to the point of needing replacement after 13 weeks.

Interestingly, if I followed the standard Boveda approach of “one 60-gram pack per every 25 cigars in the humidor” and took Prometheus at its word that this is a 150-count humidor, that would result in me placing six Boveda packs inside. Instead, I placed just three as Boveda’s more technical guidelines are one 60-gram pack for every 200 cubic inches. I suspect the chart above would look much better with six packs. 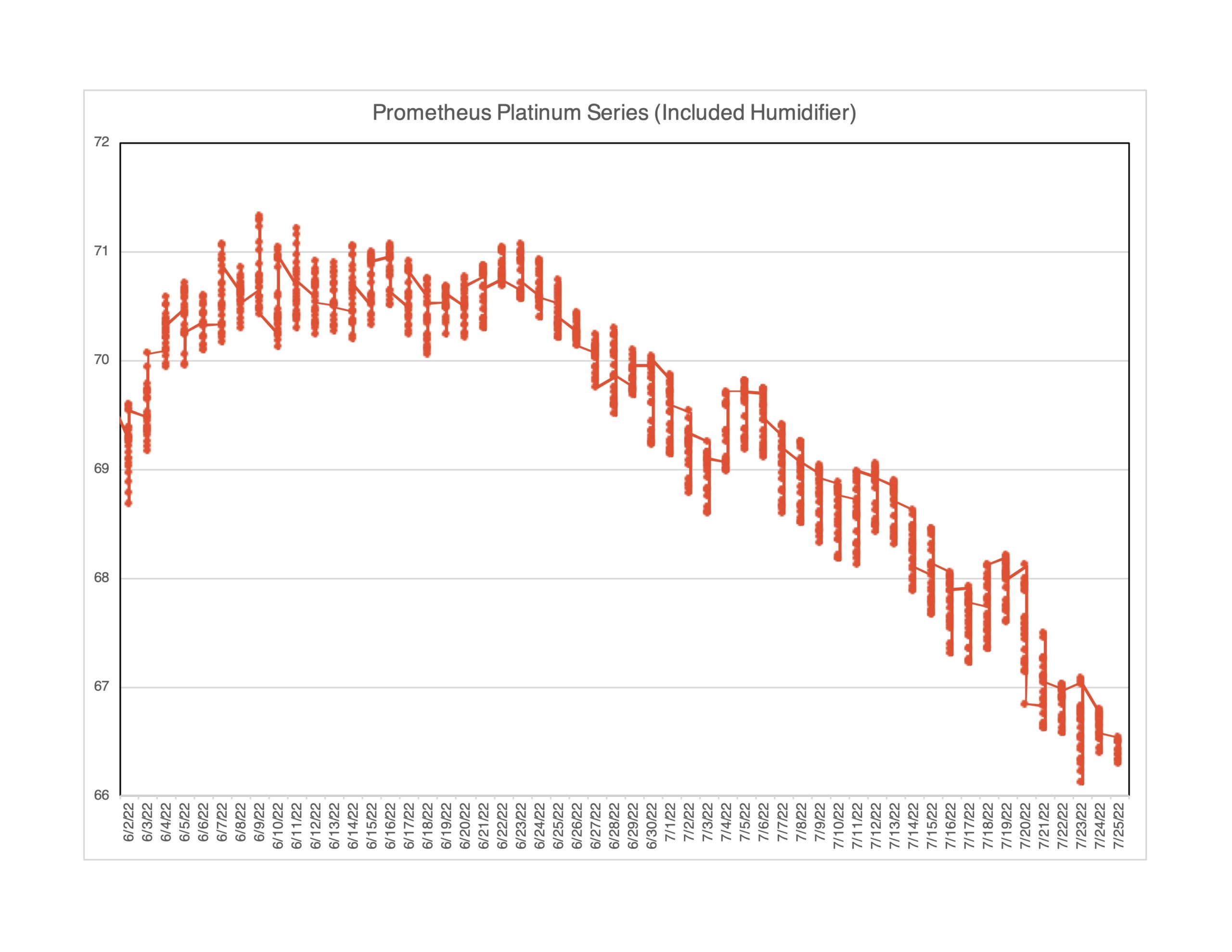 I thought there was a chance that I’d be able to fit the Prometheus  Platinum Series Humidor in the dry cabinet at a weird angle, but it was too wide. This test was not performed. The direct competitor is obviously the larger size Platinum 200 Series, which I imagine is rather similar to this humidor except for its sizes. I wish that I had more experience with Prometheus’ Octagon and Milano humidors, but I have essentially none.

Like with the recent Elie Bleu review, I figure it’s probably more useful to describe the companies that might compete with Prometheus Platinum Series humidors versus specific models: Should You Buy It?

I think Prometheus offers a nice spot in between the high-end Savoy and Daniel Marshall humidors and Elie Bleu and Davidoff. What you get is a humidor that performs well and really makes a statement due to its exterior appearance. As with most high-end humidors, I don’t think this is going to make your cigars taste any better; this is really a matter of aesthetics, which is something I particularly like about Prometheus. For $2,000 you are getting—from start to finish—a more elevated experience than the $500-1,000 humidors. Whether it’s the included accessories like the humidifier or hygrometer, the detailed instructions that impressed me so much or the beautiful box—you won’t confuse this with a standard humidor, which I think is the point.

The humidor for this review was purchased by halfwheel.