If you are heading down to the Dominican Republic next week for the annual ProCigar Festival, bringing your checkbook could land you a chance at being one of the first to try new cigars, or even taking home a humidor of one-off cigars.

ProCigar, the name of the Dominican cigar manufacturers association, has announced 10 items for the auction, which will take place at the Festival’s gala dinner on Feb. 21. Process will benefit Voluntariado de Jesús con los Niños and the Hospicio San Vicente de Paúl. The former is a non-profit dedicated to helping ill children and the latter helping impoverished elders. Fernando Romero and Mike Baca, collectively known as UR New York, were tapped to design the boxes handed to each ProCigar attendee. In addition, they designed a four-box collage, with each box containing 11 cigars. Cigar smokers might be familiar with UR New York for their work on the Zino Platinum LE 2013 “The Make of New York.” As we reported earlier this week, Tabacalera Palma—best known in the U.S. as the factory that produces the Aging Room brand of cigars—is celebrating its 79th anniversary with a cigar of its own. The winner of this humidor will get to take home seven 79th Anniversary Churchills, as well as 72 other cigars.

La Aurora’s Puro Vintage series is gaining a fourth addition later this year. The auction description describes these three boxes as “zero-numbered.” Sizes are Preferidos (5 x 54), Robusto Gordo (5 x 54) and Salómon (7 1/4 x 52/60). Each box, which is designed as a replica of the original La Aurora 1903 packaging, contains 18 cigars. There are 50 cigars of each included line. This year, General Cigar Co. decided to design a humidor that mimics a traditional Dominican tobacco barn, a rancho. Inside the mahogany humidor is 120 Macanudo Estate Reserva Jamaica cigars.

For the 2014 Little Puff, a charity event hosted by W. Curtis Draper, La Flor Dominicana brought a box of special cigars, rolled by company head Litto Gomez himself. The cigars are back again, this time in a 100-count humidor.

Last year, as part of the Davidoff Art Edition 2014, the company produced 50 Collectors Edition boxes which include unique prints from Quisqueya Henríquez, the Cuban-born artist who produced the deigns for the cigar during a residency at the Davidoff Art Initiative. One of those 50 boxes is included in the lot from Tabadom Holding, Inc.

In addition, the winner will also receive the Davidoff Limited Masters Edition 2015, details of which can be found here. 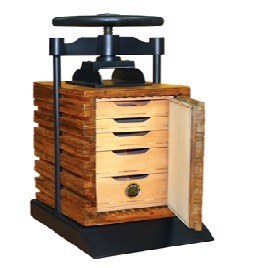 It looks like cigar molds in a tobacco press, and it is. The auction item from the Reyes family includes vintage molds selected by René León that have been hollowed out to create a humidor. Inside are 200 cigars from the factory.

Arturo Fuente’s auction package includes four boxes of the Don Arturo Gran AnniverXario Destino al Siglo that was released in 2013 to celebrate the company’s 100th anniversary. The winner will receive one 26-count box of Siglo de Pasión and one 13-count box each of the Siglo de Amor, Siglo de Familia and Siglo de Amistad for a total of 65 cigars.