Tuesday began fairly early as we needed to have our luggage ready at 8:30 a.m. to head to Santiago; only, we were hours away from actually heading to the city. 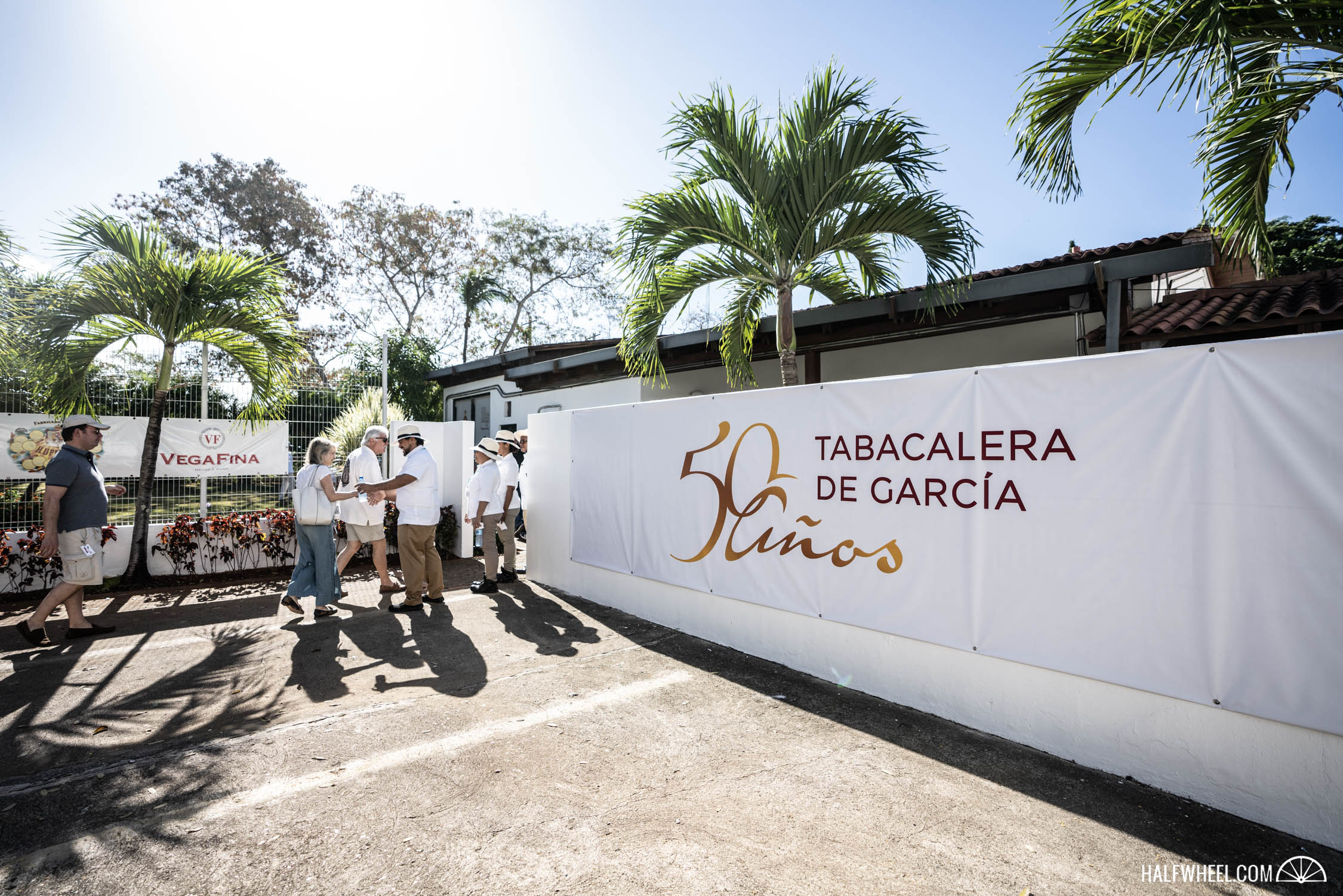 Because of how the Procigar schedule works, we’ve covered Tabacalera de García extensively over the years, so if you want to learn more about the factory, I’d recommend reading the following:

For the last few years, we’ve heard that Tabacalera de García was planning a massive makeover. I’m once again told that this is in the works and has now been approved, so perhaps next year we will have something that looks dramatically different. Until now, I’ll try to focus on some of the more unique aspects. 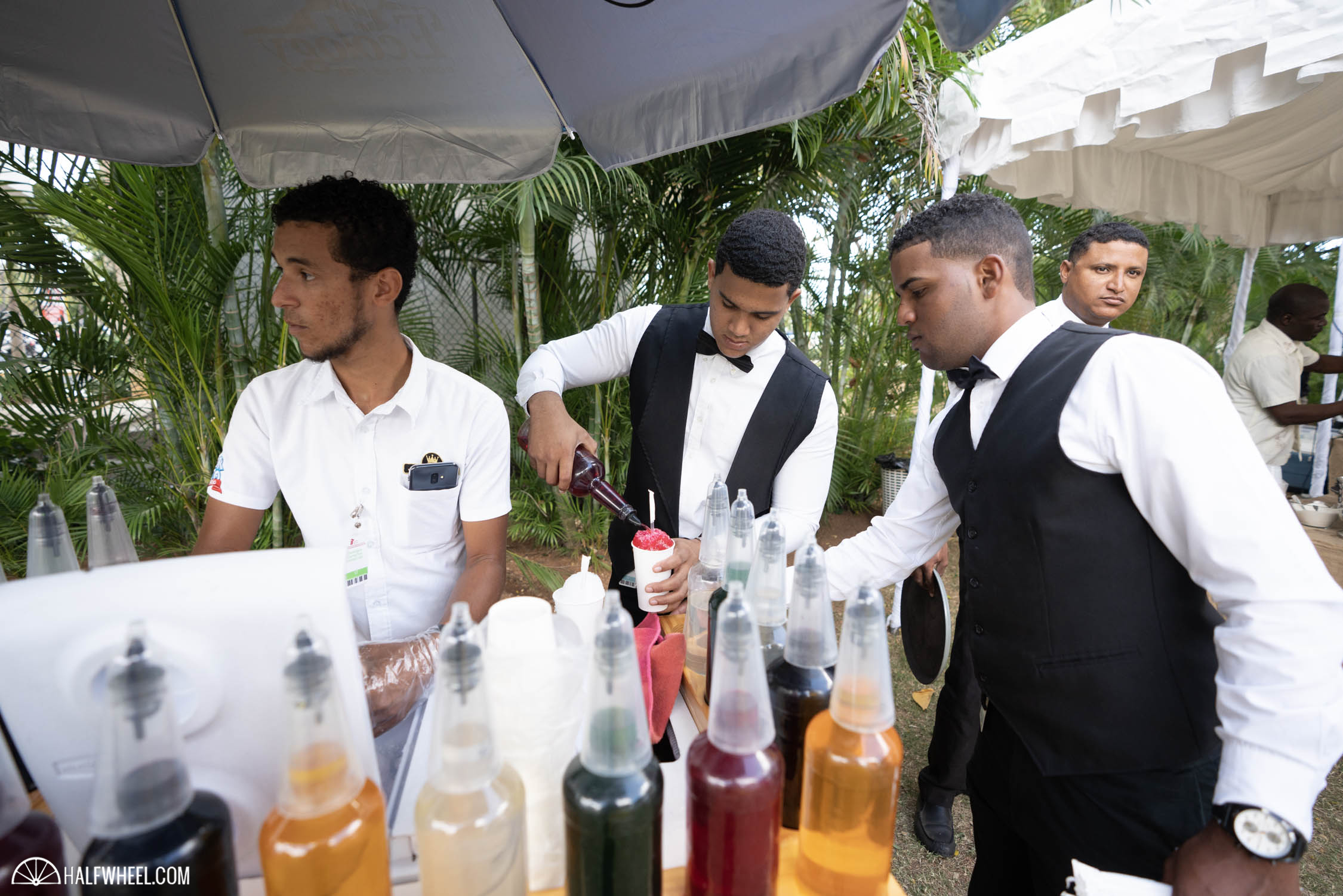 With little exception, most cigar factories don’t have visitors and days like Tuesday end up being a showcase for the factories. Tabacalera de García has always been a generous host, this year a new amenity was a snow cone station, which maybe isn’t the best pairing with a cigar. 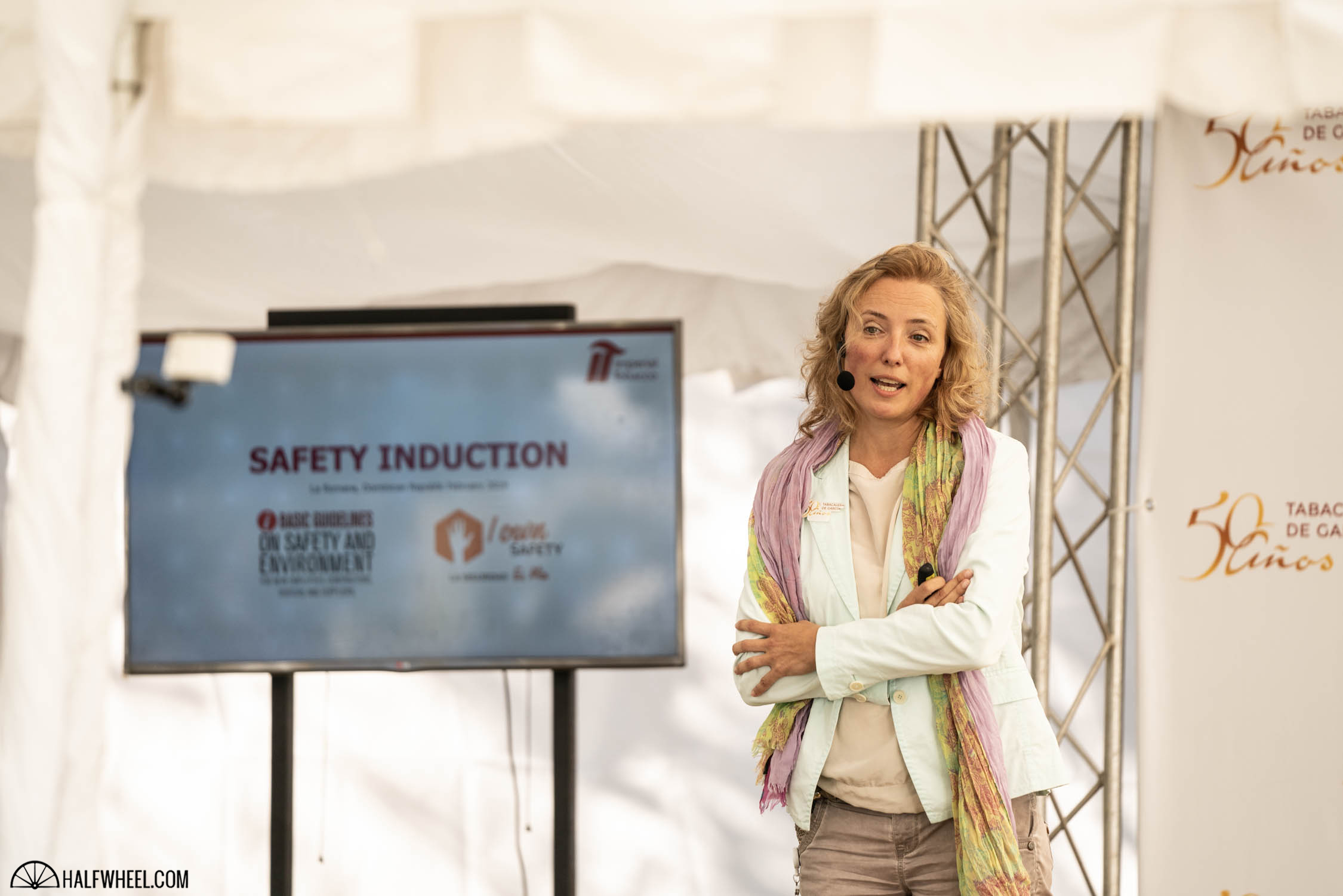 A safety presentation is not a regular part of a cigar tour. 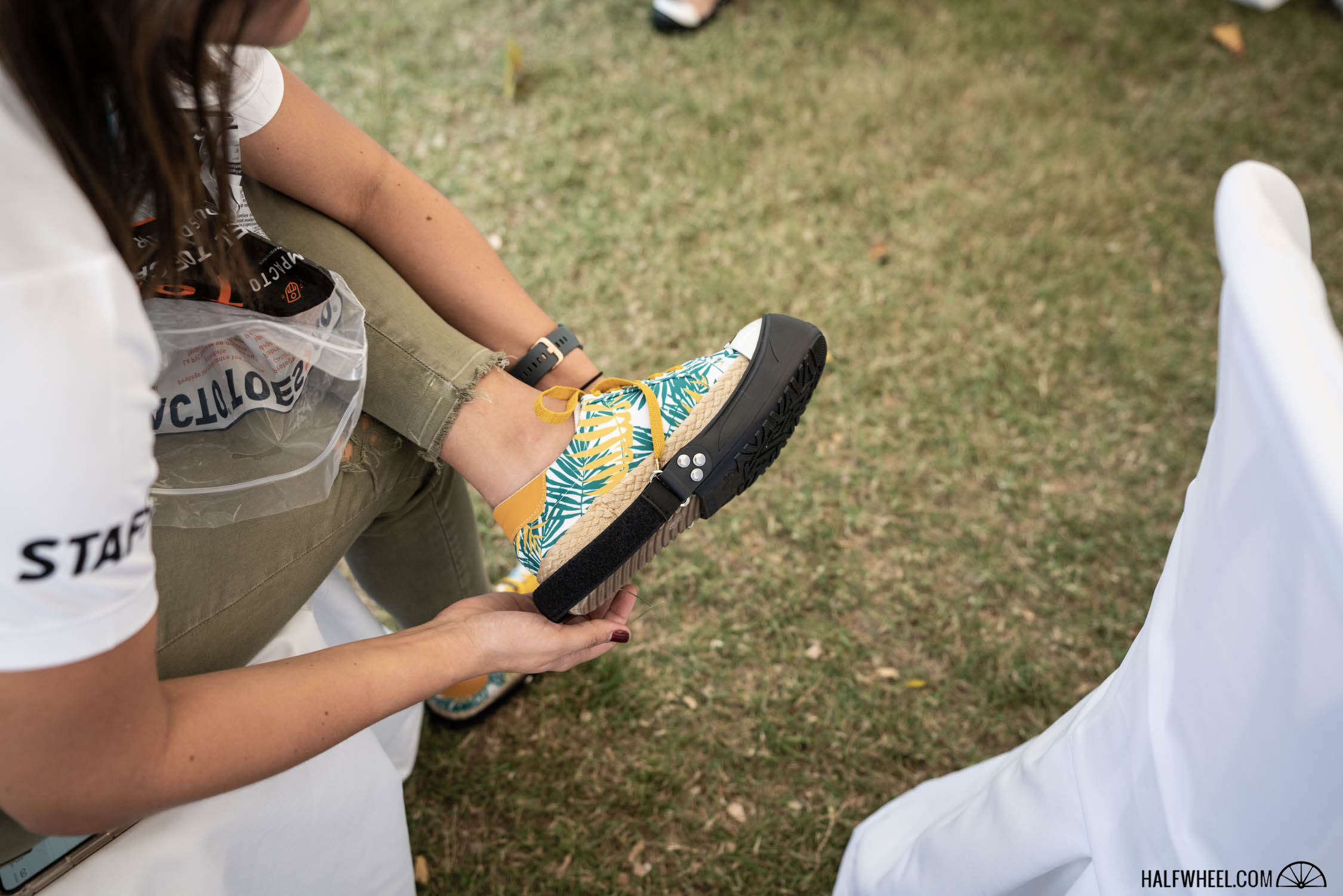 Every person that entered the factory had to place covers around their shoes, no matter how colorful their shoes already were.

Tabacalera de García, largely because of its machine-made cigar operation, is a participant in a variety of compliance programs. That means a number of things, most notably for tour guests a safety presentation and special shoes, or shoe coverings. Of note, these weren’t great, but I found them to be better than the boots we were given last year. Hands of wrapper leaves are moistened so that the tobacco can be used to create a cigar. 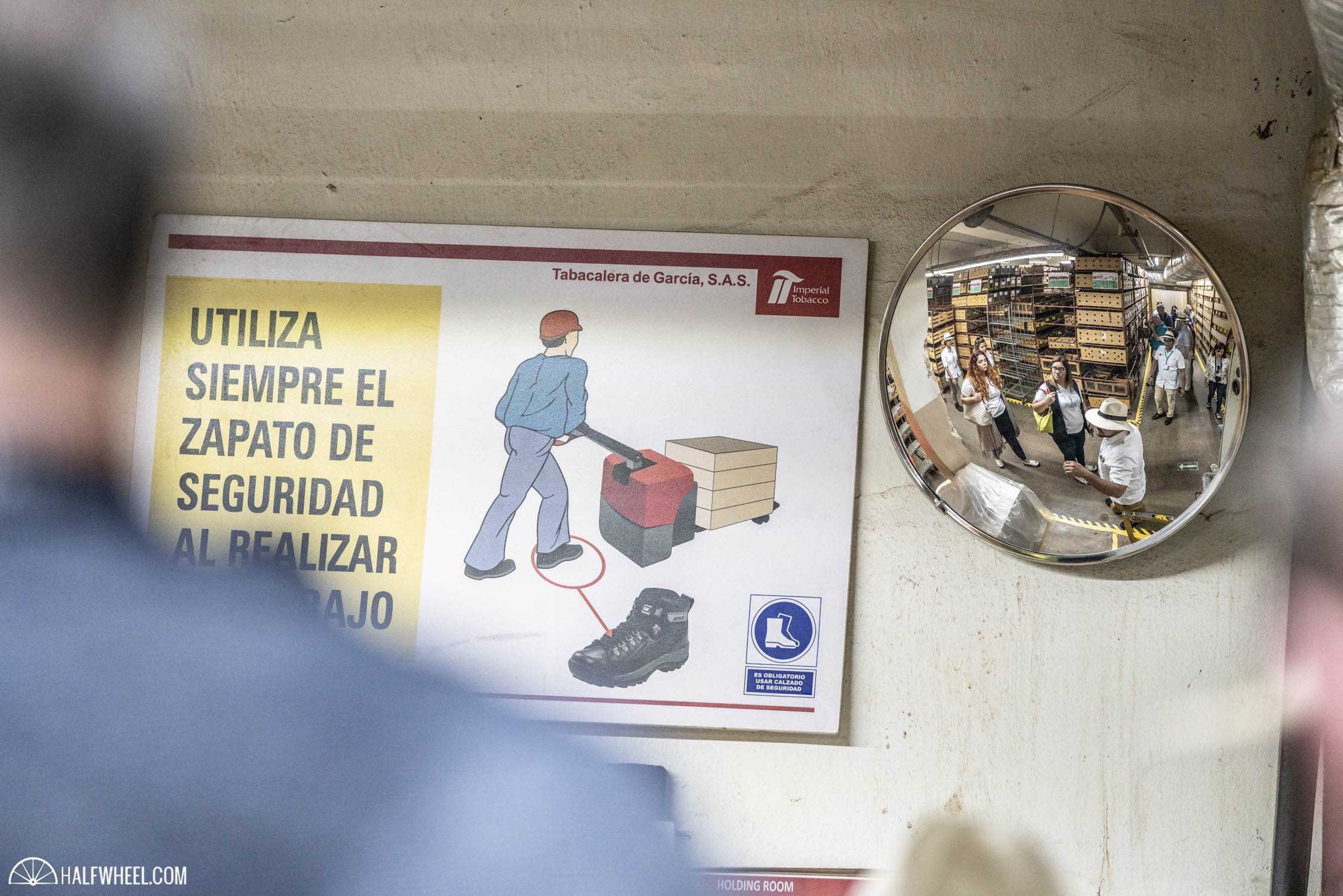 In the mirror you can see two different tour groups passing through the factory. 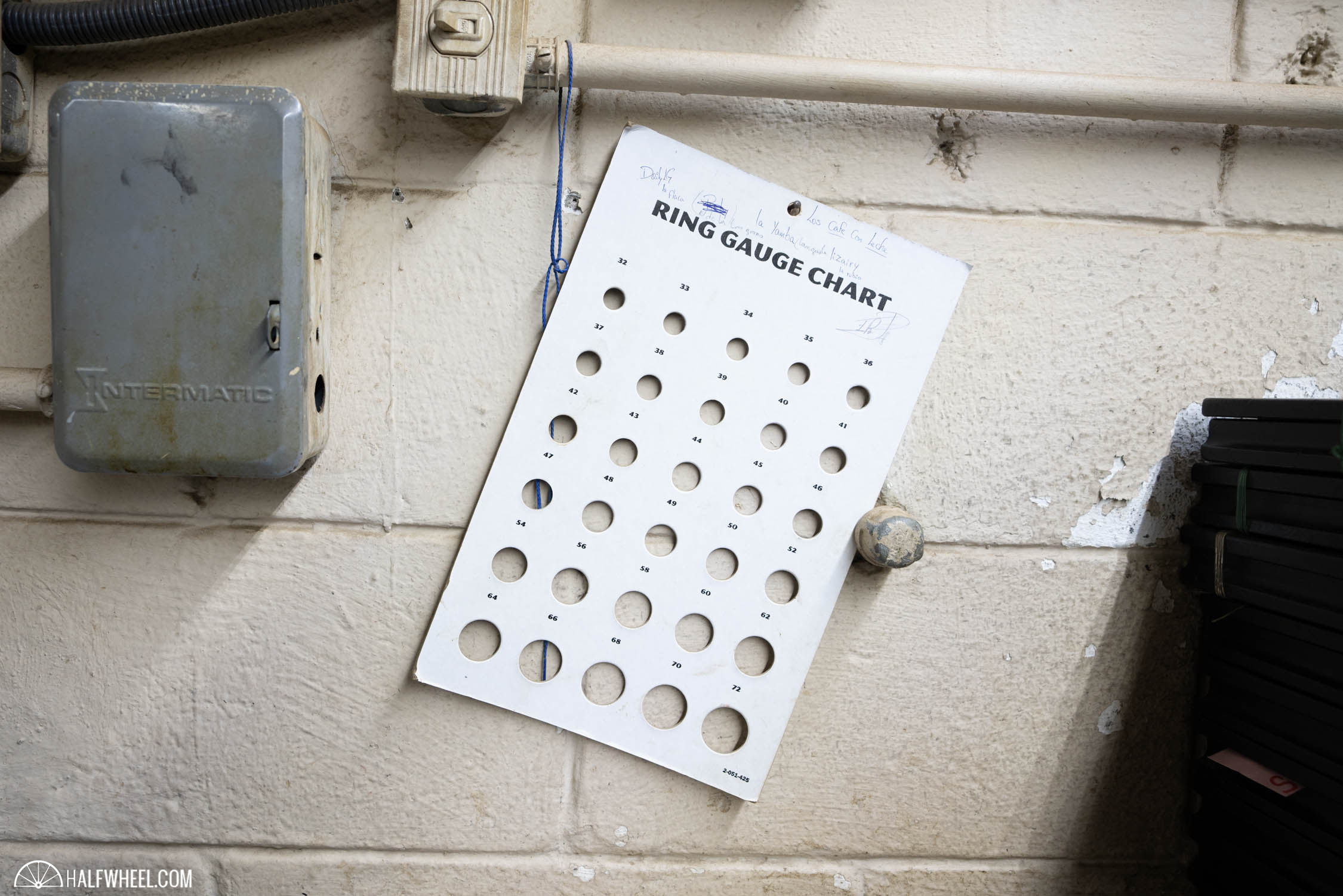 An unannounced new cigar from VegaFina.

The 100+ guests were divided into a variety of tour groups which means that we didn’t start from the beginning of the cigar making process. I imagine this tour might have been challenging to make sense of had I not actually done it before, particularly given the pace of the tour and scale of the operation.

One thing that is extremely unique about Tabacalera de García is that it operates 24-hours per day. This crew began work around 7:30 a.m. and will be replaced by the night crew at 7:30 p.m. The 12-hour shift is long, though that includes time for meals and a mandated rest period. 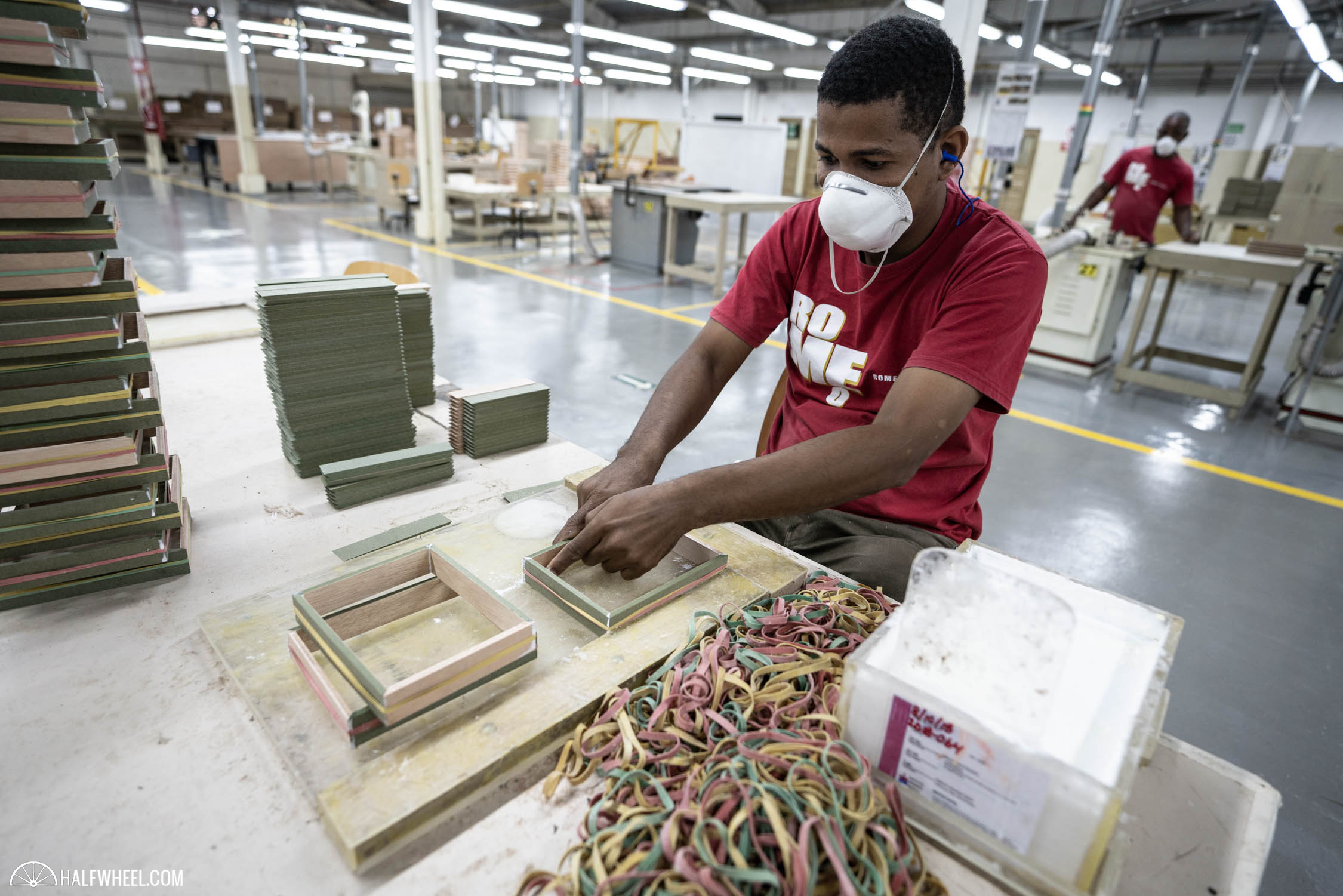 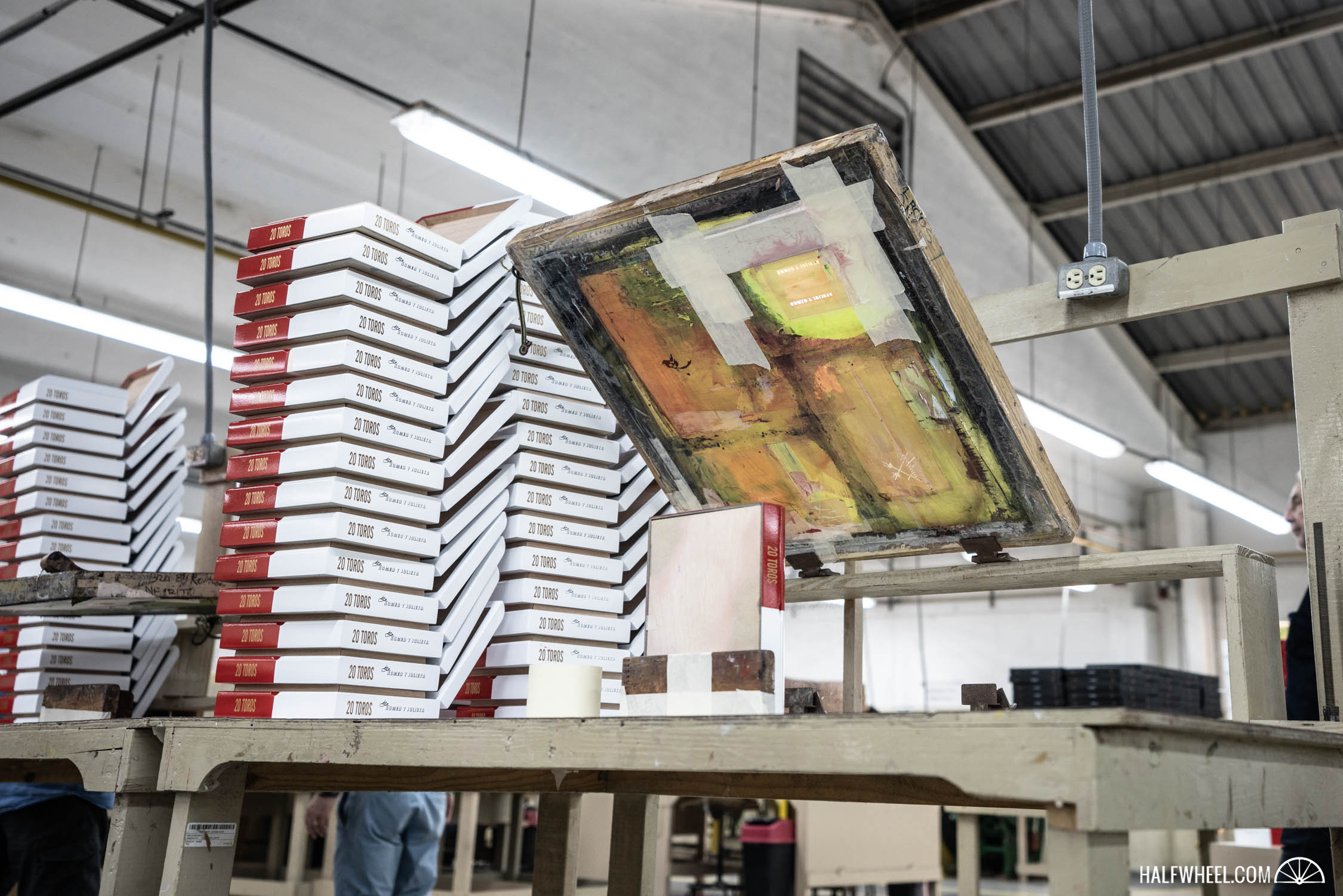 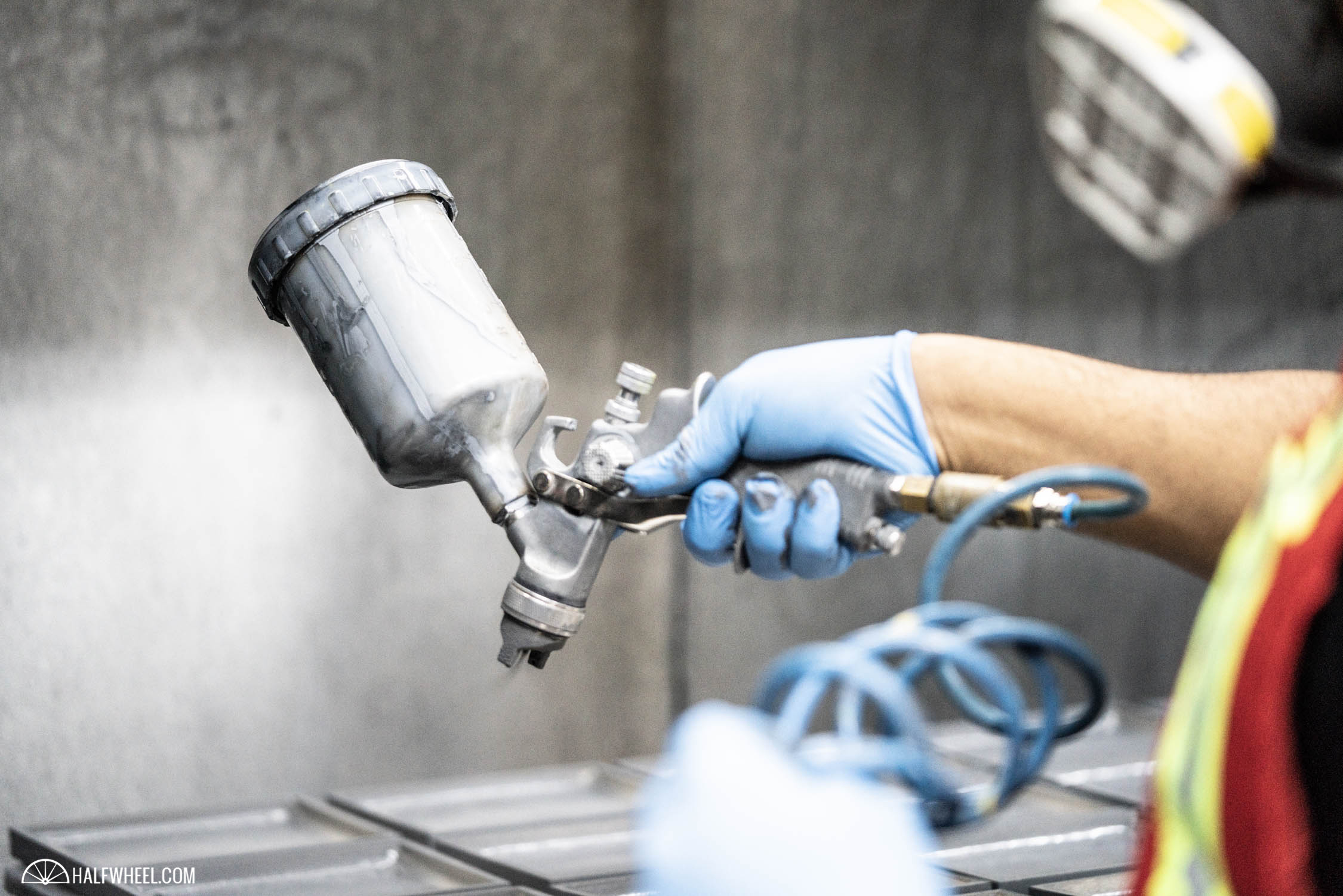 This worker managed to paint pretty well considering the breeze running through the room. 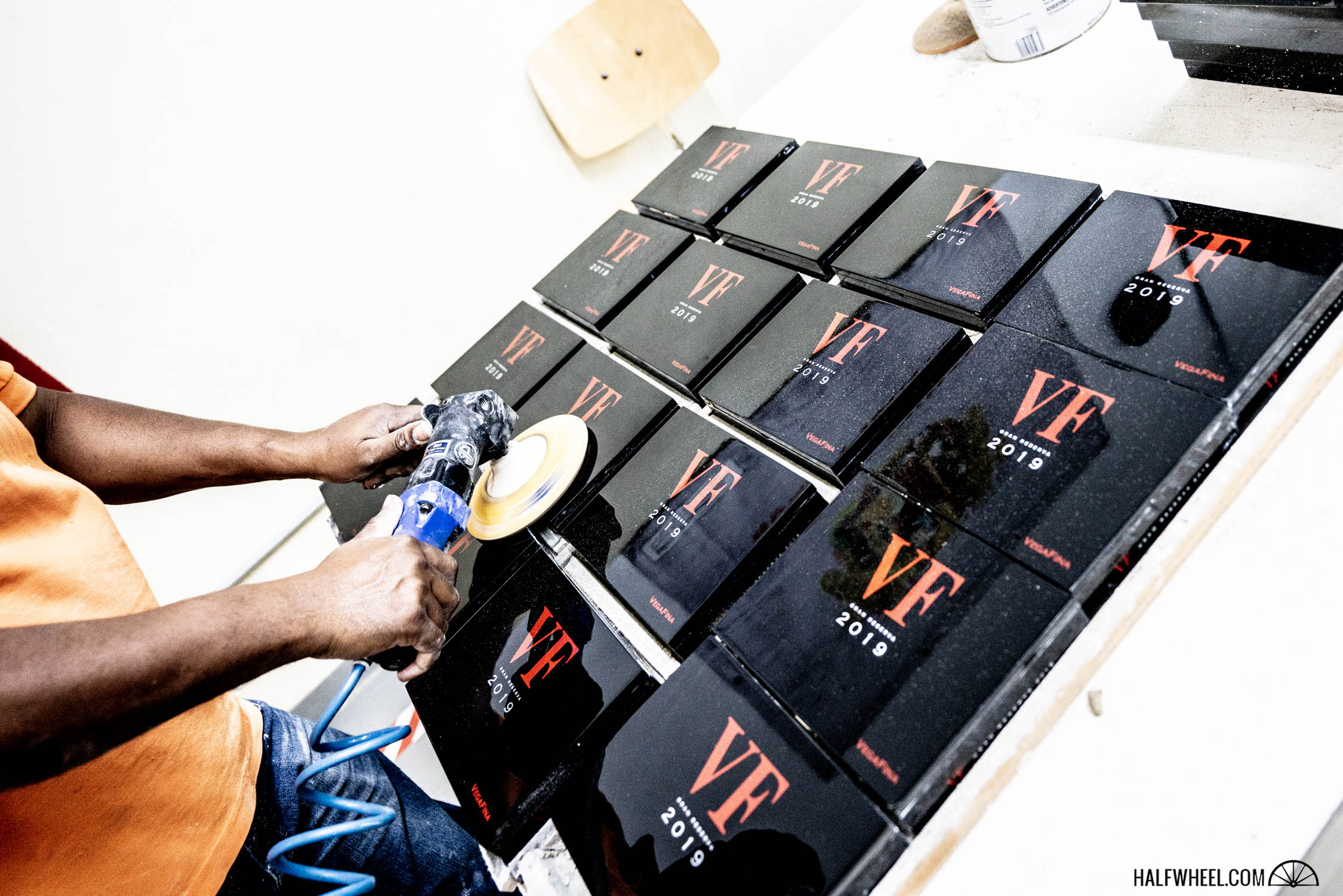 That same upcoming VegaFina cigar gets its boxes sanded and buffed.

We also got to visit the box factory at Tabacalera de García, a place I’ve only been into once before. It’s extremely impressive and one of the more modern operations as far as cigar box making goes. Unfortunately, this part of the tour was extremely quick and done in larger groups, i.e., even more challenging to follow.

We then headed back to Casa de Campo for a quick lunch before embarking on the journey to Santiago. Like last year, I ended up sharing a smaller bus with a half dozen other media members. As someone that’s done the Casa de Campo to Santiago bus ride in a large bus, I was more than happy to pay for $70 to shorten the journey by at least 90 minutes. Some of that is comfort, some of that is spending less time on the bus, but one big factor is so that I can write posts like these and have a minute to get prepared for Tuesday night.

In prior years the Tuesday night cocktail reception would be hosted at the rooftop pool of the Gran Almirante. While the view was incredible, the one downside was that the event had long outgrown the space and there were times in which people probably got too close to the edge of the pool. This year the event was moved to the much more spacious Garden Court Hotel, which was the right move.

I—like seemingly everyone else—ended up at Saga, the restaurant and bar owned by Augusto “Foofy” Reyes that shares a name with his daughter, Nirka’s, cigar brand. As always, the food was great and we managed to close down the place, shortly before I write these final words.

Tomorrow starts in about six hours, not exactly the most ideal of sleep schedules.