Our annual packaging award list is always an interesting activity for me.

All four of us nominate and vote on items and it sheds a light on what we each think about in terms of style and design. There’s also something that seems to happen each year when I try to see the nominations in person, at least one of them surprises me in a good way.

The family started their own brand that included its own factory and carried over much of what made Perez-Carrillo Jr. one of the most admired figures in the cigar industry to E.P. Carrillo.

To celebrate the 10th anniversary of E.P. Carrillo, the company decided to release a pair of 6 1/2 x 56 box-pressed perfectos in a large, heavy box. And he opted to use not cigars carrying the E.P. Carrillo name, rather, the company’s flagship brands, which fall under the Perez-Carrillo banner: La Historia and Encore.

The Perez-Carrillo Encore launched in 2018. It was a project that took years to debut—it was originally announced in 2016—and was notable not just for being a Nicaraguan puro, an odd choice for a Dominican manufacturer, but also that the tobacco used was aged in tercios, which are bundles of tobacco held together by royal palm leaves and rope. For the 10th Anniversary release, 10 La Historias and 10 Encores were packaged in this incredibly well-done box that speaks for itself. 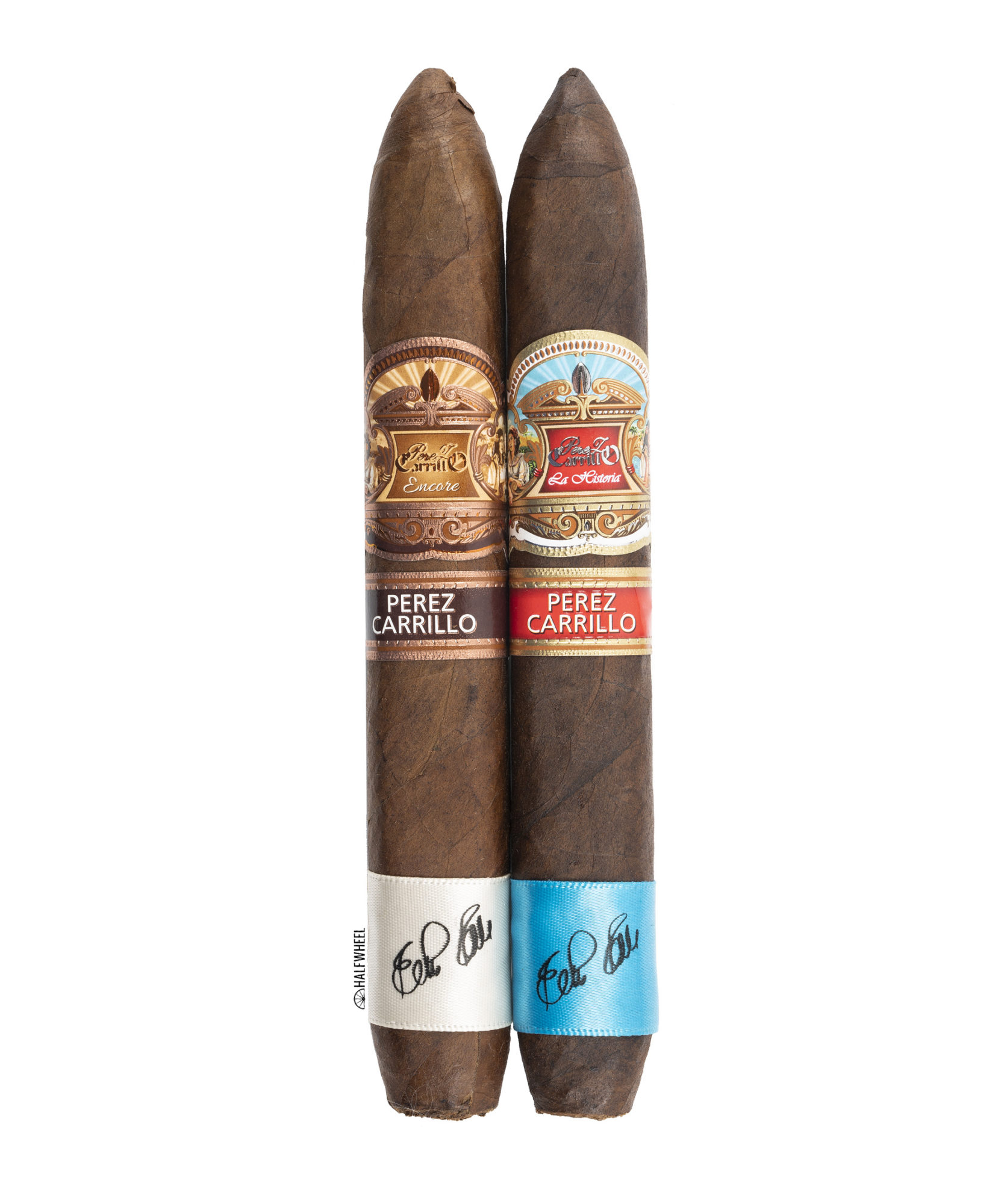 One nice addition—something I can’t say I’ve seen before—is that Ernesto Perez-Carrillo Jr.’s signature is printed onto the ribbon of each cigar.

The entire package—20 cigars in total—is priced at $400 and limited to just 1,000 numbered boxes. 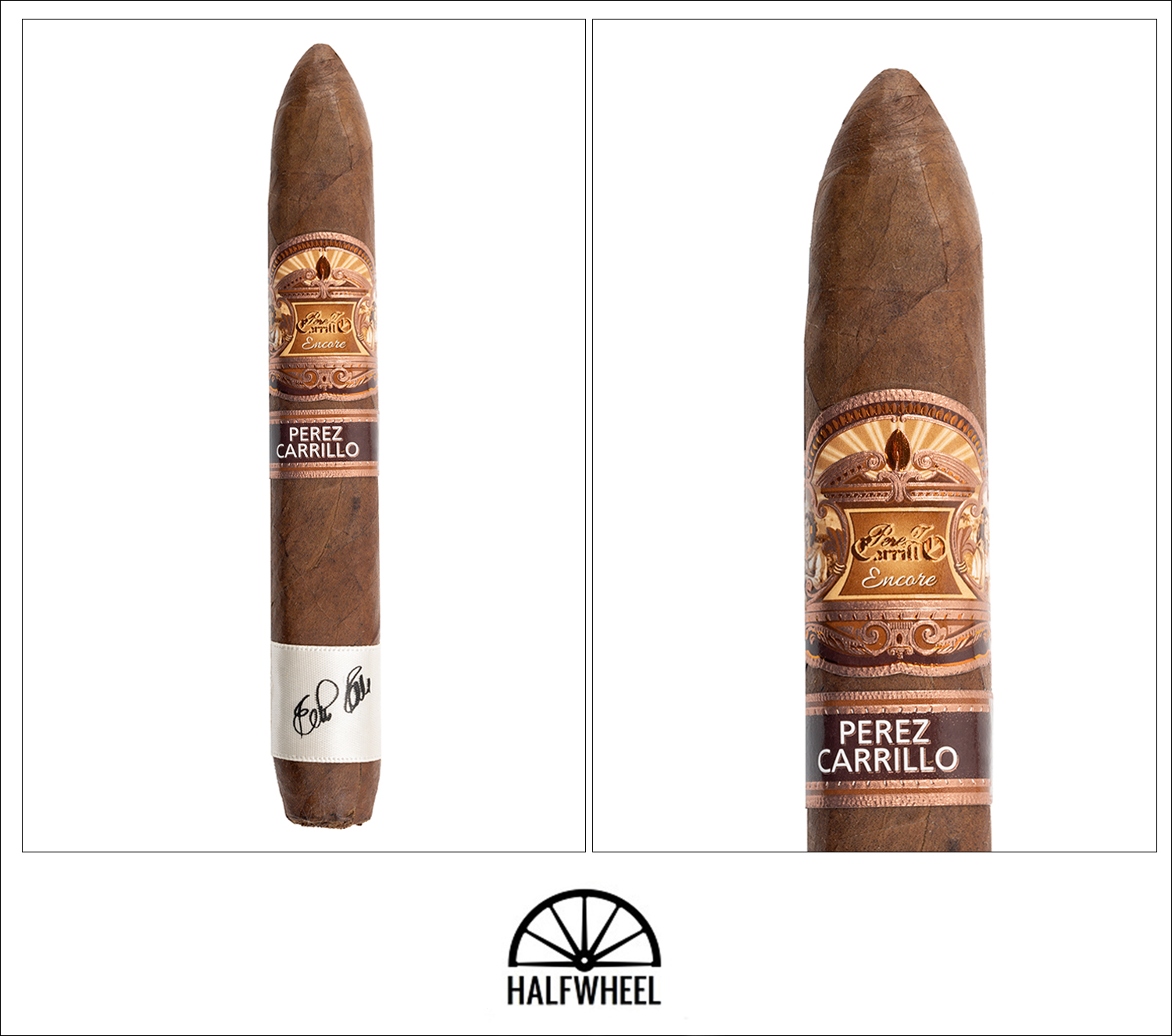 The Perez-Carrillo Encore 10th Anniversary is a very beefy-looking cigar. It’s a thick perfecto with a rustic-looking cover leaf, though two of the three cigars have a cracked wrapper. The foot is super unique due to the combination of a large perfecto vitola and an aggressive box-press, producing an oval shape. Aroma from the wrapper is a mixture of rock salt, some acidity and apples. The foot smells concerning with some lacquer smells over a bit of medium, right around medium-full. There’s further signs of some artificial flavors on the cold draw, something that reminds me more of brand new furniture than paint. Underneath is some candy corn, but the main flavor is some sort of chemical note.

It begins with earth and toastiness, along with some grittiness and plastic-like characteristics that further lead me to believe these cigars got infected with some sort of chemical. Eventually those flavors dissipate, but the first five minutes aren’t great. The main flavor is burnt bread over toastiness and charcoal. Retrohales have some of the chemical flavors along with lemon and sunflower seeds. It’s one of the shortest retrohales I’ve ever had in terms of time, nearly two seconds after the smoke has left my nose the finish starts and it’s more or less the same as without a retrohale. It finishes with a mixture of cinnamon, paprika and a burnt bread flavor. Flavor is full, body is full, strength is medium-full. Despite the cracked caps, smoke production is incredible and the cigar seems to be unaffected by how fast or slow I smoke.

There’s a lot more oak and earthiness in the second third of the Perez-Carrillo Encore 10th Anniversary. Things are also a bit saltier, but outside of an occasional blueberry sweetness it’s very tough to pick up much else. The retrohales have a lot of damp woods and some candy corn, but the wood notes just overwhelm everything. There’s saltiness, a reduced paprika sensation and some lemon through the nose. Flavor is full, body is full and strength is full. Construction remains excellent with more smoke than is necessary. The final third has a barbecue-like hickory and a whole grain-like flavor. Together, the two sensations really make it seems like I’m in a barbecue restaurant. Retrohales don’t change the flavor much, there’s an added generic earthiness flavor and a lot of paprika, which I didn’t really realize had disappeared but is now back with a vengeance. The finish is a mixture of damp earth and some leather. Flavor is full, body is full and strength is more than full to the point where I’m needing to head to a couch to lie down. It has been quite some time since I smoked a cigar—for review or otherwise—and then needed to go sit down and drink a sugary drink before moving again. The Perez-Carrillo Encore 10th Anniversary delivered a nicotine effect I haven’t felt in quite some time and don’t really look forward to having again anytime soon. The trouble for the cigar is that I don’t think those negative side effects justified the flavors I got. It wasn’t bad, but it just wasn’t terribly interesting outside of the mental image you can have of me suffering on a couch. At $10, this would all be fine. At $12, I could understand it. Even with the packaging, I think a manufacturer could have some success selling this cigar at $15. But after smoking three of these, I could never envision a world in which I would recommend spending $20 per cigar on this, unless of course you want to watch one of your smoking buddies have a nicotine episode.