Ah, the year 2000, a time when some thought society would crumble to an end due to a computer glitch.

It was also the year that Padrón Cigars released the appropriately named Padrón Millennium, a limited release composed of 100,000 6 x 52 toros in a tweaked 1964 Series blend. The cigars were rolled the year before and were packaged in 1,000 humidors of 100 cigars, with each case containing five solid cedar trays that held 20 cigars each. Each cigar—and each case—was individually and sequentially numbered with bands showing off Jose O. Padrón’s signature.

In terms of blend, the Padrón Millennium was described as similar to the 1964 Series—albeit a bit more bold in flavor—and the tobacco used was already aged for five years before it was rolled into the cigars. While the vast majority of the cigars released were rolled with a maduro wrapper, there were some rolled with a natural wrapper as well, but they were extremely difficult to find.

Close to 16 years later, the company announced it was releasing another batch of Padrón Millenniums that had been aging in the company’s humidors since the original release. Carrying the name Padrón Reserva Millennium, the 4,000 cigars were sold in 1,000 packs of four cigars: two with a maduro leaf and two rolled with a natural wrapper. According to the company, money from the sales of the new release funded the construction and operation of the Instituto José O. Padrón in Estelí, Nicaragua, a facility that teaches English and computer skills to children in the area around Padrón’s factory.

I was extremely disappointed in this cigar, to say the least. While researching for this review, I came across many people who smoked one, and loved it, but most reviews were from the 2001-2004 range. I have heard from various people that Padróns are not meant to be aged for any significant about of time, and now I believe it. So, it seems to me that these specific cigars, being 10-years-old and 15 years since the tobacco started aging could definitely be beyond their prime, and that is probably the main cause of the disappointing smoke. In fact, just to make sure I was not wrong, I smoked another one the night after and got almost the same results. After this, I cannot recommend picking these up at the prices they are commanding. Buy a 45th Maduro instead. 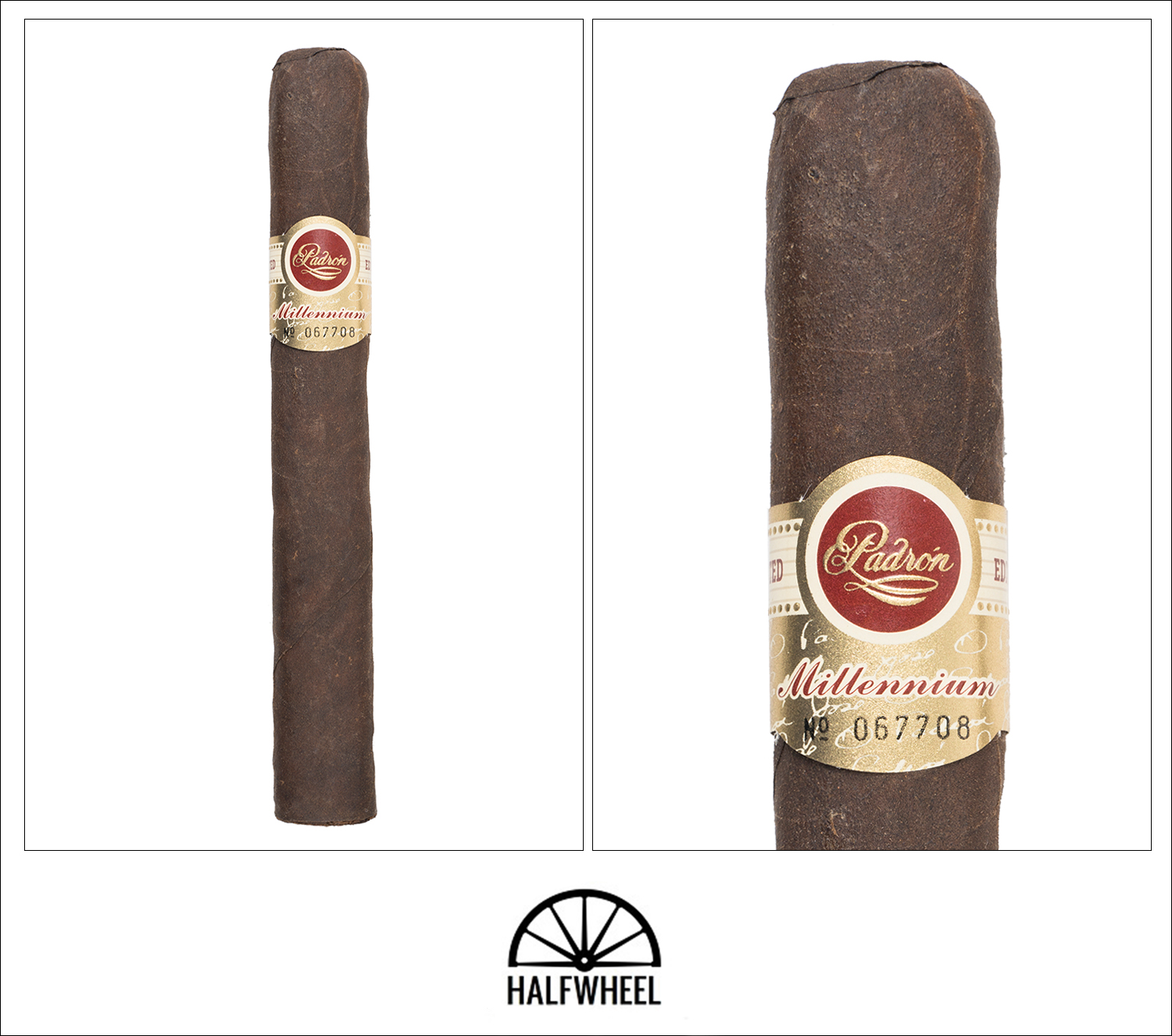 Visually, the Padrón Millennium Maduro is a sight to behold, with an absolutely gorgeous dark espresso brown wrapper that features quite a bit of tooth and no oil whatsoever that I can discern. The band is fairly loose on the cigar—this one is numbered 067708—and I am bit surprised at how sloppy the cap looks to have been applied. Aroma from the wrapper is a combination of orange cream, leather, earth, cedar, espresso and black pepper, while the cold draw brings flavors of aged cedar, leather tack, cocoa nibs, sourdough bread and slight varnish.

The Padrón Millennium Maduro starts off in a way that offers very little in the way of hope of what would come later, with earth dominant on the palate, interspersed with leather, cedar, bread and a touch of cinnamon. The sourdough bread note from the cold draw is in evidence on the finish as is some fairly aggressive black pepper, but both are not strong enough at this point to make much of an impact on the profile. While I am picking up some slight floral sweetness on the retrohale, the black pepper drowns it out for the majority of the first half. 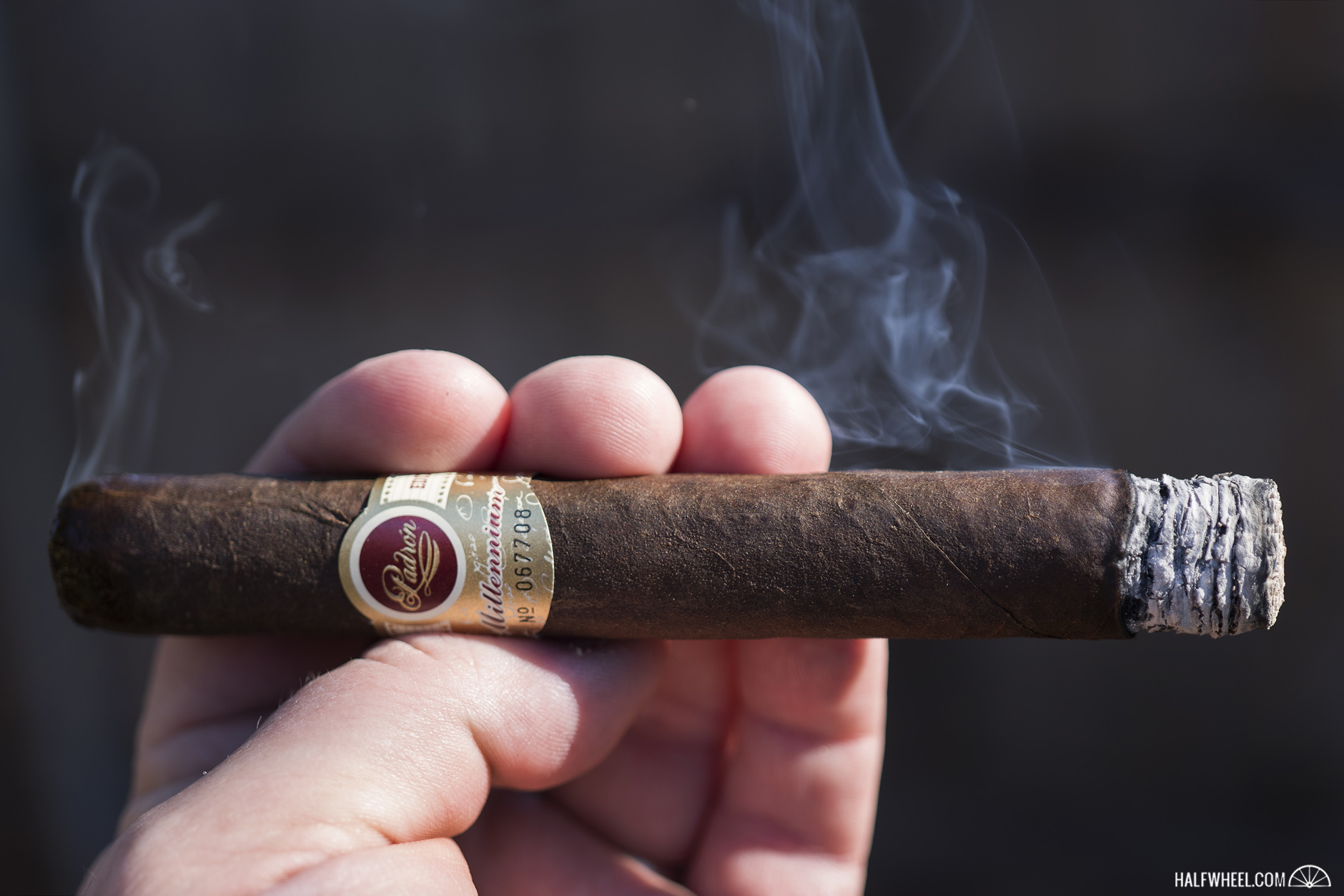 Unfortunately, both the sourdough bread and black pepper on the finish are long gone by the halfway point, replaced by a distinct—if a bit borning—aged cedar note. There are other flavors noticeable in various amounts—including slight cinnamon, ash, tobacco, coffee beans and leather—but none of them come close to take the top spot over from the dominant flavors. The slight floral sweetness from the first half has almost totally disappeared, leading to a noticeable lack of complexity overall.

Construction-wise, the Padrón Millennium Maduro performs virtually flawlessly, including an excellent draw after a straight cut and a razor sharp burn throughout the cigar, meaning I did not have to think about either attribute even once. In addition, there is copious amount of dense, white smoke, while the overall strength stuck at a point just south of the medium mark after one hour and 48 minutes of smoking time when I put the nub down with a little less than an inch to go.

My first review of this cigar was a textbook case in how expectations can change: I had searched all over for a few of the Millenniums, purchased them and smoked them with about as much anticipation as I can remember at the time. As you can see from the actual review, the results I got were less than stellar, and I have always wanted to revisit the blend. I have never thought that that vast majority of Padron blends age very well, and this 18-year-old cigar proves why with a profile that is predominantly ashy, earthy and very, very linear. My first samples of the Padron Millennium Maduro remains one of my most disappointing experiences with cigars, and while this cigar was better in almost every way than those, it was still far from good enough to pay the prices that are being asked for it, especially when I know how good a fresh 1964 Exclusivo is.