In fact, as the name implies, the Padilla 85th Anniversary de Heberto Padilla is a release that commemorates company owner Ernesto Padilla’s father, the noted Cuban poet Heberto Padilla, who passed away in 2000 at the age of 68. The new cigar is being rolled at Yaxel Ortiz’s The Best Cigars S.A. factory in Nicaragua and is composed of a Connecticut broadleaf wrapper covering Nicaraguan tobacco in both the binder and filler as well as additional undisclosed tobaccos. In an email, Padilla told halfwheel that the cigars are a “limited regular production” and were shipped to a number of “very select retailers” prior to the Aug. 8 deadline imposed by FDA.

There are five different vitolas, all of which are packaged in boxes of 20 and retail between $9 and $11 per cigar: Although it is a bit hard to see underneath the two bands that take up at least half of the cigar, the Padilla 85th Anniversary de Heberto Padilla is covered in a dark, mocha brown wrapper that is fairly smooth to the touch. There are a number of significant veins running up and down the length of the cigar, and I also see some slight oil. Aroma from the wrapper is a combination of dark chocolate, manure, grass, barnyard, leather and earth while the cold draw brings flavors of anise, leather, ground coffee, pistachios and black pepper.

Starting out, the Padilla 85th Anniversary de Heberto Padilla features a strong earthy and leather core, with other flavors of bitter espresso beans, creamy oak, baker’s spices, leather and a touch of citrus bringing up the rear. There is a bit of inderiminnate sweetness as well as some significant black pepper on the retrohale, and I am a bit surprised by the amount of tongue-tingling spice that is present as well. Construction-wise, the draw is excellent so far after a simple straight cut, and while the burn is nowhere close to razor sharp, it is also not close to needing a correction. The smoke production is massive off of the foot, and while the strength does increase noticeably during the entire first third, it ends up being short of the medium mark by the time the second third begins. 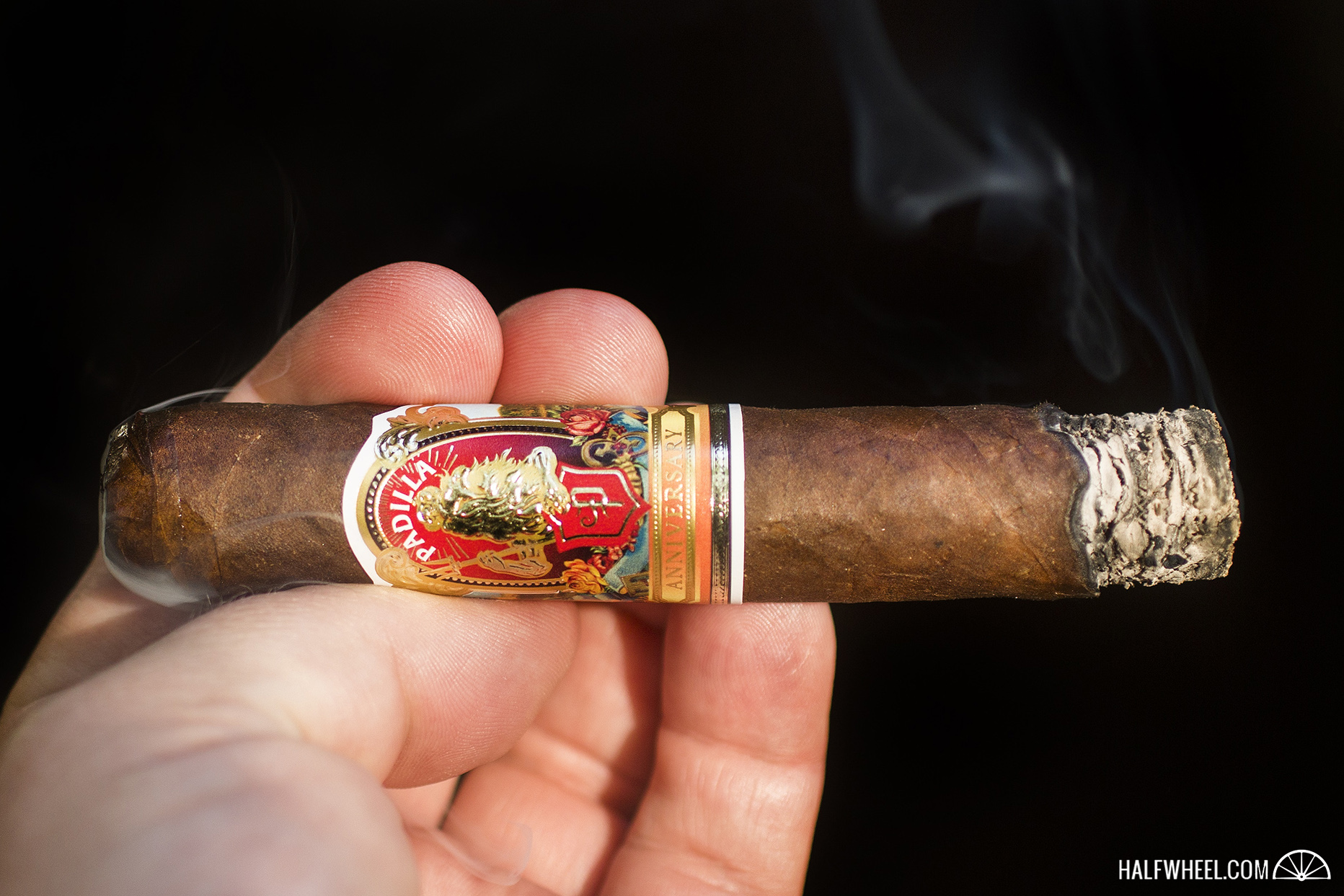 Coming into the second third of the Padilla 85th Anniversary de Heberto Padilla, the earthy core that was so prevalent in the first third has been slowly replaced by a profile dominated by the same creamy pistachio note that was present in the cold draw, followed by notes of creamy oak, brewed coffee grounds, leather, citrus and a touch of floral. The sweetness on the retrohale that was so hard to place in the first third has become more distinct, reminding me of creamy hazelnut, but the black pepper has receded quite a bit, as has the spice that was present on my tongue. The draw continues to impress, and while the burn was touched up once, it was never close to getting out of hand. The overall strength easily hits the medium mark by the halfway point, but seems to stall out there, while the smoke production shows no signs of decreasing anytime soon. The final third of the Padilla 85th Anniversary de Heberto Padilla starts out quite similar to the second third, but soon takes a turn, with the creamy pistachio note morphing into a combination of both leather and oak, followed closely by dried tea leaves, hay, dark cocoa, barnyard and anise. The hazelnut sweetness is still present, but in nowhere near the levels of the second third, and while the black pepper on the retohale remains noticeable, the spice on my tongue is long gone. The burn has evened up nicely, and the draw is as good as ever, while the smoke production continues to be well above average. The overall strength has not budged noticeably from the second third, and I put the nub down with about an inch left with it still in the solid medium range. While two of the samples of the Padilla 85th Anniversary de Heberto Padilla performed nicely — both in terms of profile and construction — the last cigar I smoked was obviously inferior in almost every way, with none of the sweetness, complexity or balance that I had become used to. Unfortunately, our reviews are based on three samples, and while I am willing to bet that the last one was an aberration, the score would be higher if that cigar was not included.