It has been a while (i.e. 9 months) since our last Redux Review (of the Coronado Maduro, smoked while I was in Mexico), and I thought I would bring another installment to this series…

This time, I wanted to do a Redux Review on one of the first cigars I reviewed after starting the blog WAAAAAAAAAY back in 2009, the Oliva Master Blends 1 Torpedo. I was able to purchase a full box at the time, and sadly, I only have a few left, after trading or giving away most of them.

Some history of the cigar (from the Original Review), for those of you that don’t know.

Only one “Master Blends” blend is produced at a time, with only 15,000 boxes originally planned per blend. The Master Blends 1 was released in 2003, and had tobacco that was aged for about 3 years in it, so it was an already fairly aged cigar when it came to the market. (If you are counting, the tobacco in this cigar is over about 11 years old now.) The blend changes on each release, so once they are gone, they are gone.

A quote from José Oliva:

“We took tobaccos that were not plentiful enough for a production cigar, one you are going to make year-in and year-out. Usually these tobaccos come from trial crops on a small piece of land to see how a strain develops or how it handles certain conditions. Sometimes you end up with tremendous tobacco in very small quantities. So we rolled some of this tobacco, put a Habano wrapper around it, and created Master Blends.”

The box a true work of art, with an Original Painting on the lid that can be detached from the box (they even include the tool to do it) and hung on the wall. And as if THAT was not enough, each cigar has a laser engraving on it right under the band (the Master Blends 1 and Master Blends 2 are the only cigars that I know of that have ever been produced with one). Oliva has said in various interviews that while he loved the idea and the look of the engraving, they were destroying far too many cigars trying to get it right to make it economical, so they discontinued the practice in subsequent editions of the Master Blends Series.

When I did the original Review (which you can read here, if you are so inclined), I commented on the fact that the profile seemed to be almost perfectly aged, and the strength was a solid medium.

Well, after smoking two more of these recently, I am happy to say that this blend has lost very little from the first review. The flavors were basically the same as I reported in the original review, with wood and leather in the first half, and switching over to more of a nutty, creamy note in the second half. The major difference I found between the two times smoking these cigars was that the spice that I noted in the first half in the first review was a bit less strong this time around – still present, but not as strong for sure. The burn is actually a bit better than the first time around and the draw was perfect. 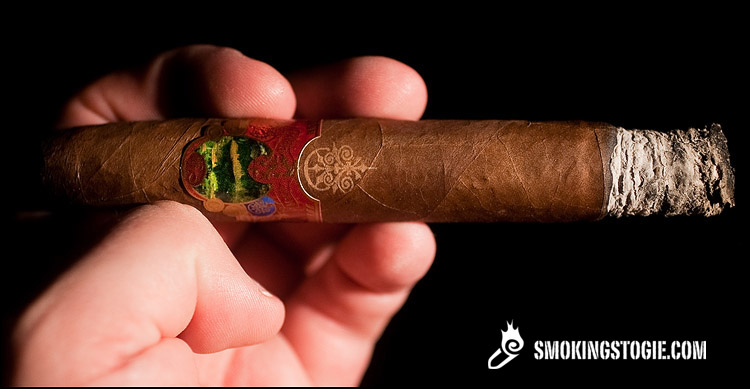 The Bottom Line: I am happy to report that the profile and flavors are still basically the same as I noted last time I smoked one of these, i.e. great! Having said that, the fact that the spice seems to be fading a bit indicates to me that these may be one the (slow) downturn. I honestly thing these still have quite a bit of life left in them (after all, the difference is noticeable, but not dramatic), but if you have some of these you have been saving, I would smoke one or a few soon.

(For information about Half Wheel’s redux review, click here.)