For this year’s installment in the Macanudo Estate Reserve series, General Cigar Co. went back to the brand’s roots and the country that produced the tobacco that helped this cigar become a staple in so many humidors: Jamaica.

The Macanudo brand was launched in 1968 and traces its history to the Fernando Palicio family, known for making Punch cigars in Cuba. When they went to Jamaica, they created the first Macanudo brand. The General Cigar of the early 1970s, then the company owned by the Cullman family, picked up the brand and made it the company’s main focus, bringing in the legendary Cuban cigar maker Ramón Cifuentes to oversee the company’s Jamaican factory and train the workers on the art of making cigars.

It’s been over 15 years since the Macanudo line featured Jamaican tobacco and nearly as long since they were made in the country. In 2000, General Cigar closed the Temple Hall cigar factory where the Macanudo line had been made and moved production to the Dominican Republic, with the use of Jamaican tobacco slowly phased out of the blend, with the process said to have begun as early as the mid-1990s as there was simply not enough quality tobacco being grown in Jamaica to support the rapidly growing Macanudo brand.

But don’t get too excited thinking that this is a Jamaican puro; if anything, it’s far from it. Jamaican tobacco is only a part of the filler, while the wrapper is a 10–year-old Connecticut leaf and the binder is Mexican. As for the Jamaican tobacco, General Cigar describes it as “a private reserve…cultivated and aged for five years exclusively for this limited release.” 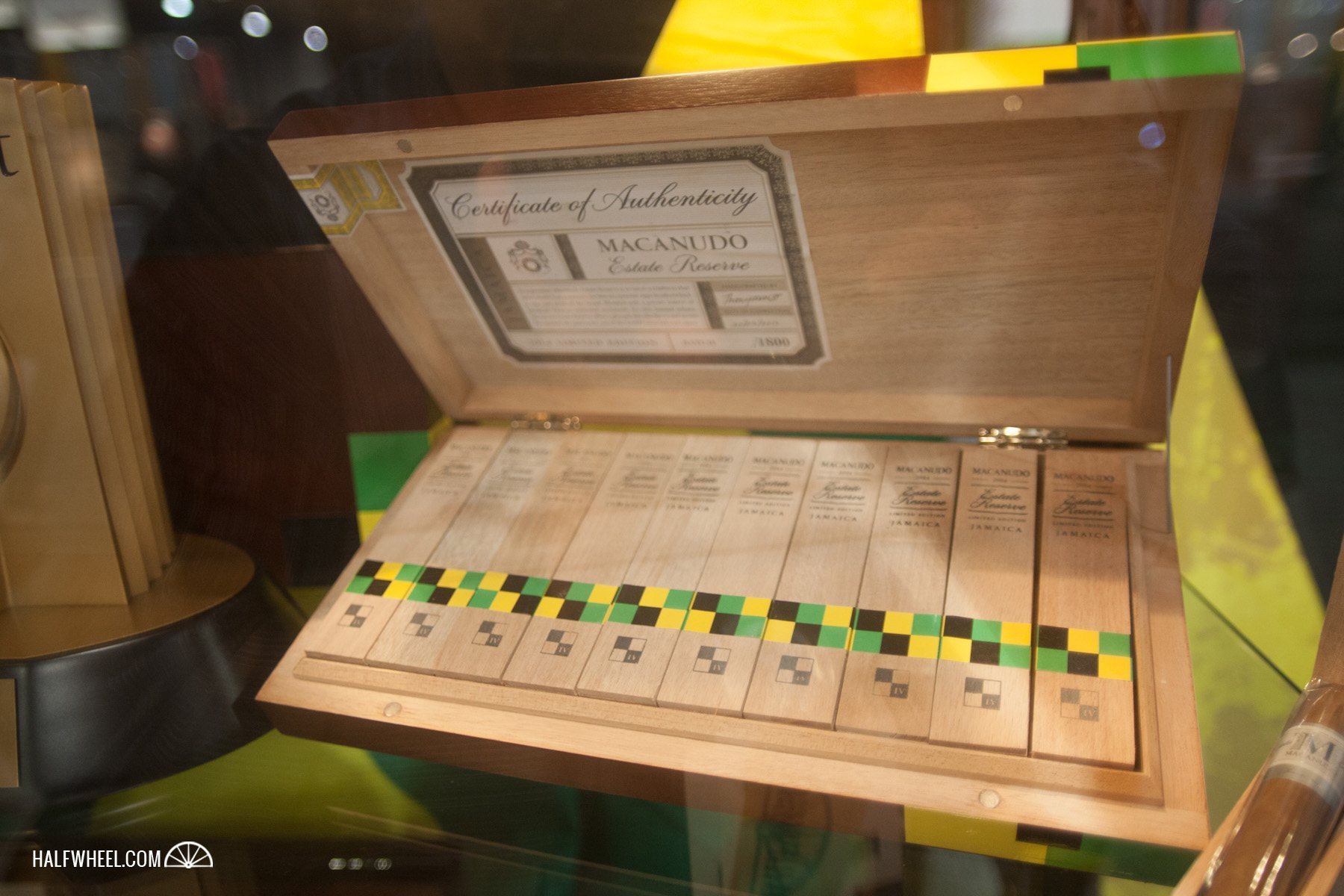 There are three sizes being released for this year’s Macanudo Estate Reserve, each coming in an individual coffin. There are two stylistic approaches to the Macanudo Estate Reserve: the white, silver and black primary band that for the most part feels very un-Macanudo, and the green, yellow and black checkerboard design of the footband which gives another nod to the cigar’s use of Jamaican tobacco, as the primary band prominently features the country’s name. The wrapper is a light tan, almost sand or corn flake-colored shade that I can’t recall seeing in some time. It’s very smooth with small veins, no tooth and only a touch of oil offering just a bit of sheen. The cigar feels uniformly full from top to bottom with a bit of a soft spot appearing in both samples just below the band, but nothing so significant that I’m concerned with how the cigar will perform. The foot offers a dry pre-light aroma marked by cake donut and dry wood with a touch of orange marmalade sweetness the most immediately recognizable of an aroma that appears much thicker and complex after second and third inspections. The cold draw is where the first hint of an unfamiliar tobacco shows up; the draw is smooth and easy, with a subtle and heavier note lingering in the background. At the risk of sounding cliche, it has me thinking of jerk sauce on thin slices of beef or chicken, just the slightest bit seasoned and saucy, and certainly interesting.

The first puffs of the Macanudo Estate Reserve are surprisingly peppery and offer much more for both the nose and palate than I expected. I am certainly not immune to the connotation of Macanudos being very mild cigars, but within two or three puffs that idea is out the window when it comes to this cigar. An early retrohale shows a very enjoyable chalk and white pepper note that is mellow enough to manage but packs enough punch to leave an impression. There’s a dry wood flavor that begins to emerge towards the end of the first inch, a familiar taste and one that has been associated with Jamaican tobacco, but there is also something a bit more lurking in the background. It’s far from outright sweet or tangy, but those characteristics are both present, with the sweetness showing up in retrohales first. Subsequent retrohales in the first third show continue to show a shift towards a dry wood note that also costs the smoke some of the smoothness found earlier. To this point the burn has been sharp and even, with smoke production more than adequate but far from billowing. The ash does a great job holding on through the entire first third, with its breaking signaling a natural transition for the cigar. 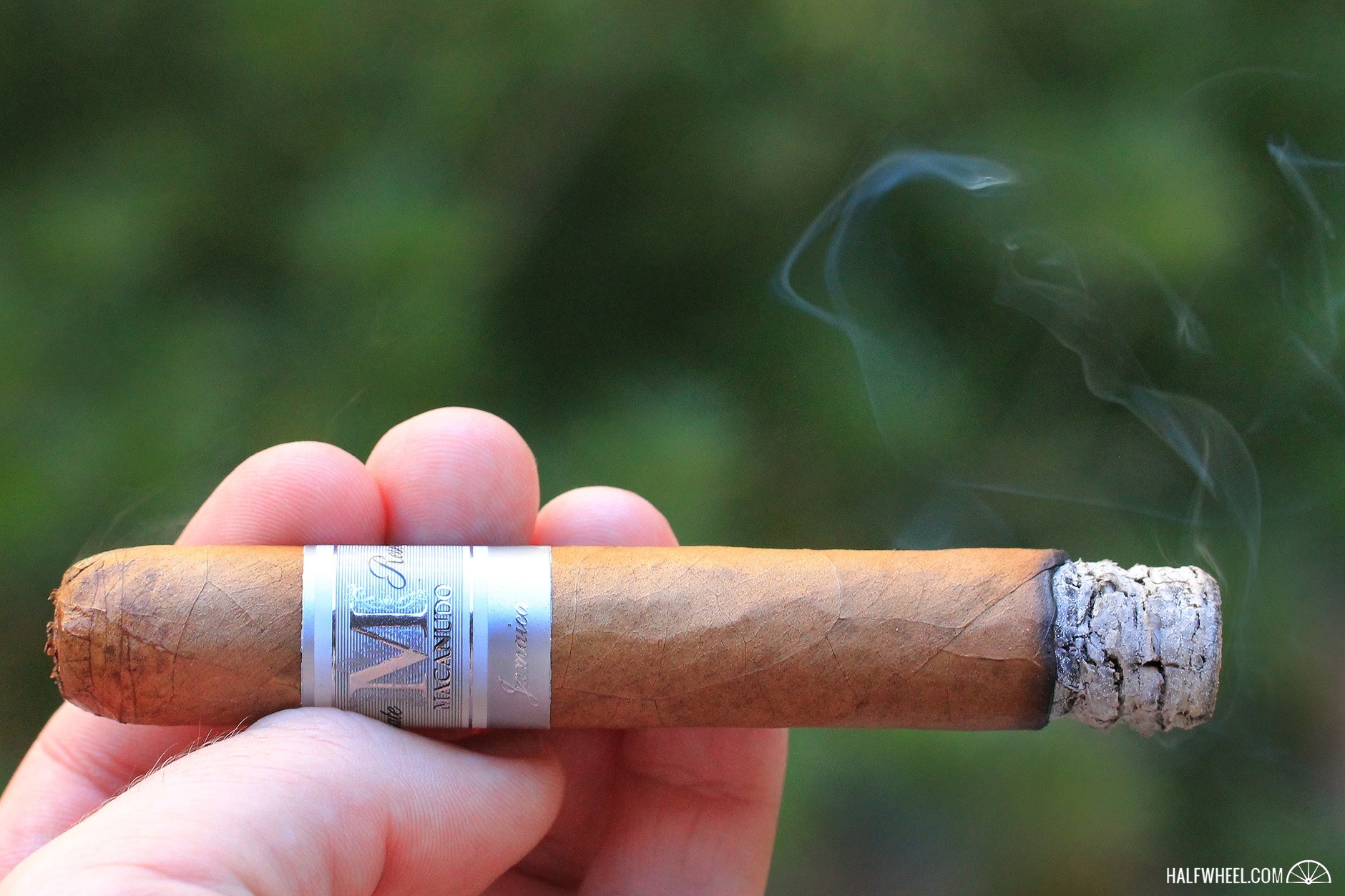 There’s no let up in flavor at the start of the second third; rather it takes until almost the midpoint for the first lull to come along. It’s fleeting though, as the woody core mellows a bit and the Macanudo Estate Reserve’s flavor continues to experiment with the chalk component; very light and very subtle, it dances on and off stage but the palate never seems to get too far out of mind. It’s just after the midpoint where the first touches of harshness come out, showing up in the back of the throat and into the chest a bit. When the combination of the dry wood, chalk and white pepper notes come together at their fullest, it certainly leaves a physical impression as well as a sensory one; the latter of which is fairly pleasing while the former is less than. The cigar continues to burn fantastically, with no need for any touch-ups and strong ash that holds on well. There is a definite increase in the intensity of the flavors at the start of the final third, with the wood being as upfront as it has to this point, with the white pepper returning from the first puffs to create good complexity and mouth feel. Between the increase in the strength of the flavors as well as the cigar itself, I find myself puffing on it a bit slower than I did earlier on as the flavors linger much longer and the residual feeling from the cigar is as strong as it has been to this point. I have to admit I find myself surprised by each puff, as between the common connotation of Macanudo’s mildness and the aged wrapper, I simply wasn’t expecting so much strength from this cigar. Depending on your personal tolerance for such a finish, you might find yourself calling it good with slightly more than an inch to go or you might choose to pursue more of the flavors by smoking it farther down; either way the Macanudo Estate Reserve will leave a lasting impression. I have to say that there aren't a lot of Macanudos that I would pay $16 for, but this might very well be one of them. I'm intrigued to give the Churchill a try to see if a bit more length gives the cigar more time to develop and show more of the complexity it hinted at. While the 57 ring gauge belicoso is a bit big for my liking, I'm also interested to see if the blend softens just a bit with more size. Up until a surprising bit of harshness comes out in the final third, this is a very enjoyable cigar that teases your senses with the tastes and aromas of a largely unfamiliar tobacco, and sometimes the price of that experience makes up for any other issues the cigar might present.