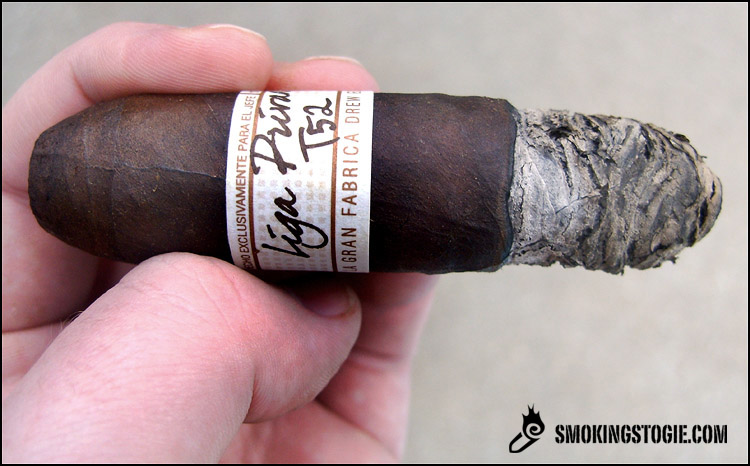 When I think of fantastic cigars of the past year, one that jumps right out at me is the Liga Privada No. 9 Flying Pig. If you are active in the cigar community, you have definitely heard, seen or experienced Drew Estate’s rise to the top of the traditional premium cigar world.

There was a time when Drew Estate was only known for its flavor infused cigars. To tell you the truth before they launched the Liga Privada line I didn’t take them that seriously. I wanted a full-bodied, full-flavored in your face cigar and they just didn’t produce that at the time. Liga Privada has changed that perception.

Drew Estate has proven that they can hang with the big boys in the full flavored world. Drew Estate is always thinking up something, they have been innovators from the beginning and that trend has not let up and there is evidence of that with the Flying Pig, A short, fat perfecto shaped cigar with a tell tale curly pig tail cap. It’s really a beautiful sight and a pleasure to smoke.

The No. 9 was limited to 2,000 boxes, sold out very fast and are now a year later almost impossible to find. Drew Estate has satisfied our palate with yet another release of the Flying Pig, but this time in the T52 blend.

Many will say that the T52 blend is a touch milder, but fuller in flavor. The blend is roughly the same but the T52 sports a stalk-cut habano wrapper as apposed to the No. 9’s Connecticut broadleaf wrapper. This year’s T52 Flying Pig will be sold in bit higher numbers than last year’s No. 9 Flying Pig, now 3,000 boxes of 12. 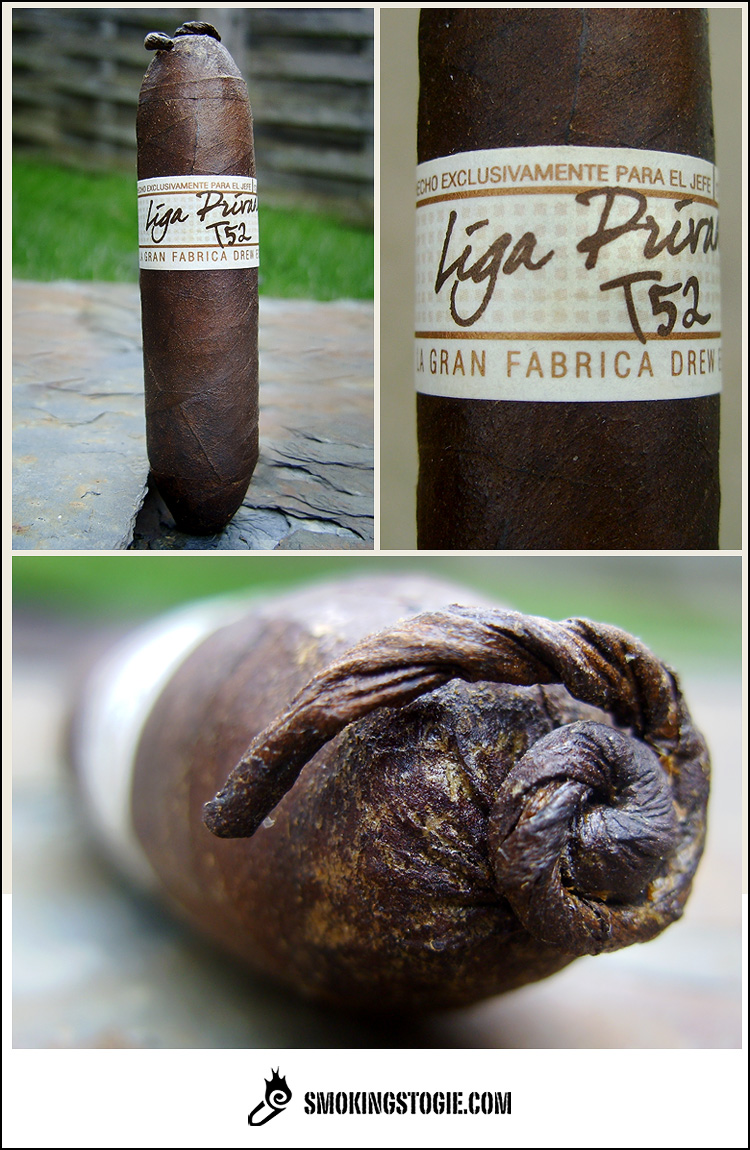 Visually this cigar is obviously a show stopper. It has a short, fat perfecto look to it that really does make you think of a squat little pig. It has a twisty little pigtail on the cap that looks like it was dunked in vegetable glue but otherwise looks very nice. It sports a beautiful chocolate brown T52 Connecticut habano wrapper that is quite toothy and rough to the touch. The cigar is very firm and well packed, there are not soft spots to speak of and it has a nice tight wrap.

The pre light aroma is full of chocolate, coffee and a touch of leather. As I clip the pigtail off and I take a cold draw I am hit with a mellow cedar flavor, some coffee, and that “bready” flavor I have come to find in a lot of Liga Privadas. It’s a very nice, full flavored pre light that you know will lead up to something nice.

I just want to take a moment to compare the No. 9 Flying with the T52 Flying Pig. Interestingly, in the picture below you will notice that the T52 Flying Pig is actually a little bit smaller than the #9 flying pig. There is also a difference in the wrapper color between the two with the No. 99 having more of a reddish color to it where the T52 is more of a chocolate brown color. 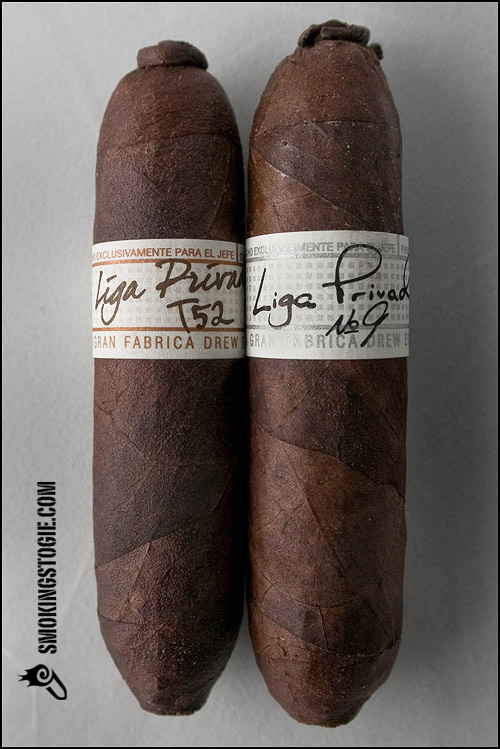 Starting off in the first third the cigar just bursts with smoke and flavor from the get go. Right away I am getting lots of coffee, chocolate and leather. There is a bit of pepper on the finish but overall there isn’t as much spice or kick as I was expecting. The cigar is putting off just massive amounts of smoke; it’s almost overbearing, but very enjoyable at the same time. The draw is a bit loose so I can attribute a lot of it to that. 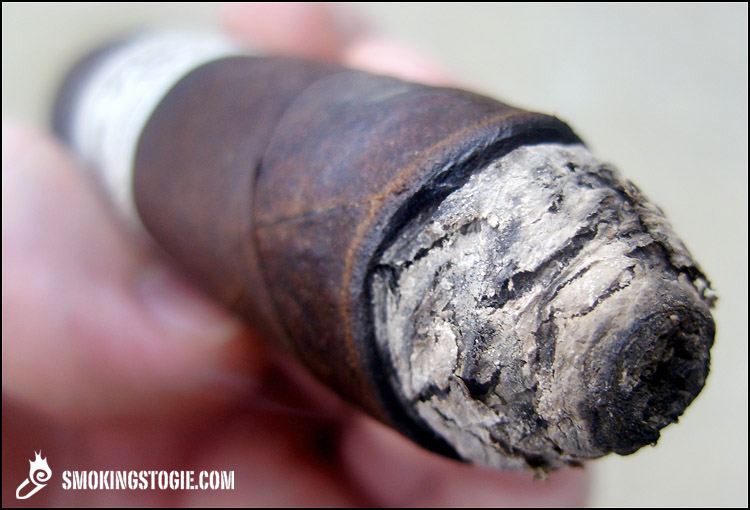 Coming into the second third the coffee and chocolate are really dominating the show. I am still getting a touch of leather but it has died down from the first third considerably. There is a hint of clove or perhaps cinnamon on the finish through the nose that is very nice. The cigar is very full in flavor, but the spice kick has yet to show. So far it’s not as strong as the No. 9, which is to be expected. The finish is nice and long and offers a tingle of pepper on the tongue with coffee and some sweetness at the end.

Finishing up in the final third the cigar is still showing a solid profile. There’s coffee, chocolate, leather, pepper, and now a really deep earthiness. The cigar literally tastes like rich soil and wet vegetation. It really is showing a lot of flavors in this last third and that’s ideal for me. The odd shape of these makes it really hard to nub them as low as you would other cigars but I can tell you I smoked it till my fingers burned. I was very impressed with this cigar. It had bold, in your face flavors and a full-bodied feel but stayed relatively even keel in the strength department. It also offered a change in profile from other T52 vitolas, and that is a huge bonus for me. As much as I like the T52 better than the No. 9 traditionally I would have to say I liked the No. 9 Flying Pig better. It had more of a spice kick that I personally enjoy in my cigars. That is not to say this isn’t a good cigar, and I will be buying a few boxes when they come out.. not only is this vitola is fun to smoke, but it really satisfies with its rich profile and long burn time.