Cigar companies have been using exclusive cigars as an incentive for retailers who attend the IPCPR Convention & Trade Show for a number of years, and in 2013, L’Atelier Imports unveiled its version. Dubbed the Extension de la Racine, the line now encompasses three different vitolas, all of which incorporate a sun grown criollo wrapper covering a Nicaraguan binder and an all-Nicaraguan filler blend that includes some Sancti Spiritus tobacco. 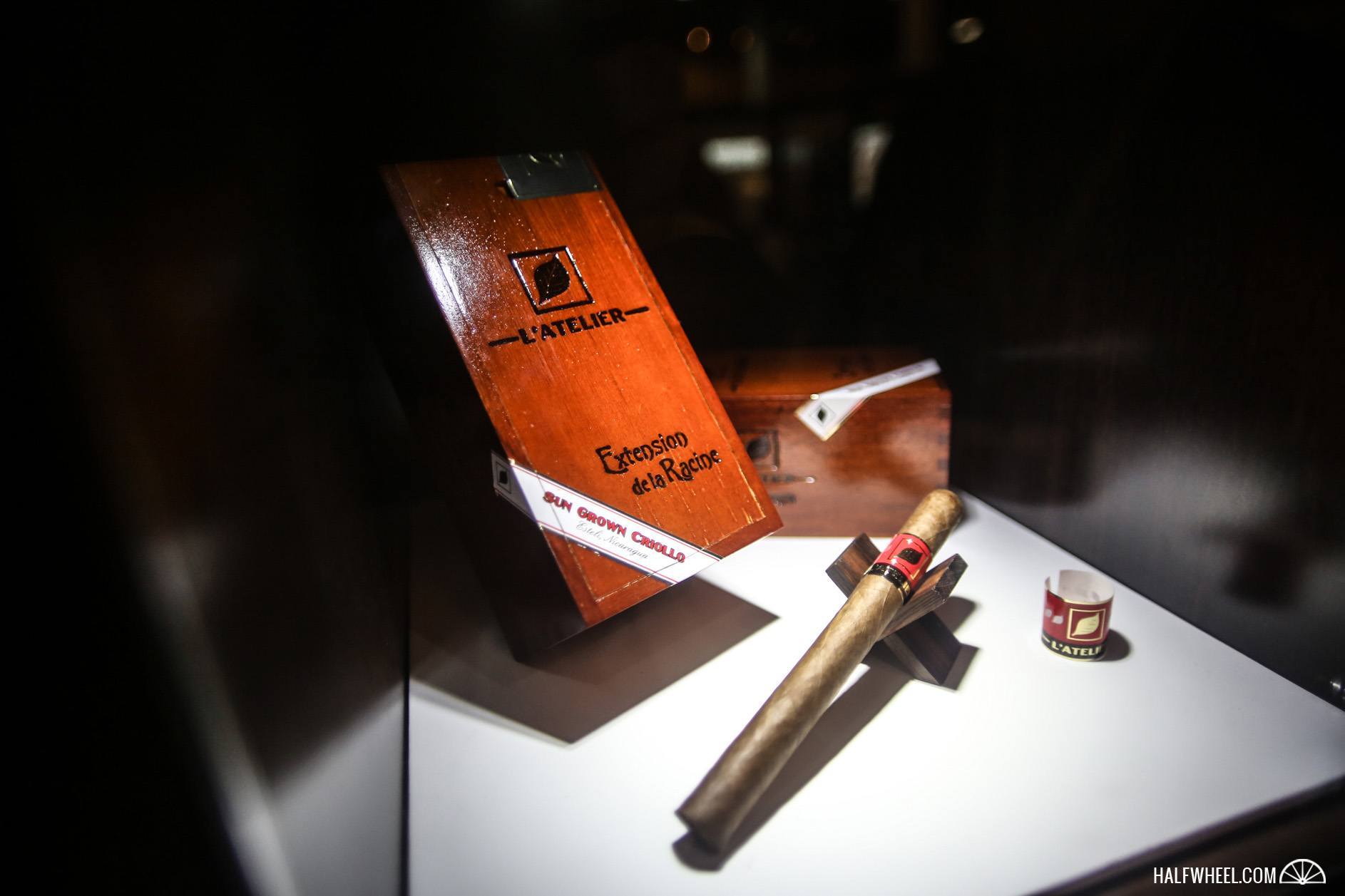 While the cigars are supposed to be an incentive for retailers at the U.S. trade show, international customers attended the show and placed orders. Those orders have already shipped to Europe and as such, the cigar is already on sale in Germany.

“Our distributor comes to the IPCPR every year along with one of our best retailers in Germany,” said Pete Johnson of L’Atelier Imports in an email to halfwheel. “We wanted to give them a jump on the release since most of what we do is released in the USA first.”

Covered in a distinctive dark reddish brown wrapper that shows quite nicely with the red band, the L’Atelier Extension de la Racine ER15 is smooth to the touch and features no bumps along with very few veins. The cigar itself is spongy when squeezed, and there is very little oil visible. Aroma coming from the wrapper is a pungent combination of oak, bourbon, manure, leather, citrus and peanuts while the cold draw brings a nice creamy cedar, leather, earth, a slight orange and a small amount of pepper.

Starting out, the first third of the L’Atelier Extension de la Racine ER15 is awash in flavors of creamy leather, espresso, dark cocoa, grass, cedar and a touch of orange citrus on the retrohale. Instead of a more normal pepper, I am tasting a distinct red pepper heat on the retrohale, along with some significant spice on my tongue, at least to start. The finish features a wonderful sweet maple that seems to be gaining strength as the first third burns down as well. The draw is excellent so far, and the burn is close to razor sharp, while the smoke production is close to normal. Strength-wise, the Racine hits a point close to medium by the end of the first third, but seems to stall out there.

The spice on my tongue dies down almost nothing around the start of the second third of the L’Atelier Extension de la Racine ER15, and while the red pepper note on the retrohale is reduced as well, it still strong enough to be a major player in the profile. Interestingly, while I am still tasting some maple sweetness on the finish, it has been joined by a very obvious—albeit fleeting—peppermint note, almost as if I had covered peppermint bark in maple syrup. The dominant flavor on the palate is an overt creamy cedar note, while other flavors of bitter espresso, dark chocolate, leather, earth, toast and hay flit in and out at certain points. Construction-wise, both the draw and burn continue to impress, while the smoke production has actually increased noticeably, although it remains within normal levels. The over ally strength has not increased much by the time the second third draws to a close, but does manage to inch to a solid medium.

The final third of the L’Atelier Extension de la Racine ER15 is, if you will pardon the pun, an extension of the second third, with the same red pepper on the retrohale and maple sweetness on the finish combined with a touch of peppermint. The flavors in the profile remain pretty much the same: creamy cedar, bitter espresso, dark chocolate, leather, earth and a return of the orange citrus from the first third. The construction continues to give me no problems whatsoever, and the strength hits a point just north of medium by the time I put the cool-to-the-touch nub down with a little more than an inch left.

I have smoked each of the other two vitolas of this blend and different points, and I have to say, while they are similar in profile, neither one of them holds a candle to the amount of complexity, nuance and balance that the L’Atelier Extension de la Racine ER15 shows. Both the constant red pepper heat on the retrohale and the maple and peppermint sweetness on the finish were extremely well integrated, and the combination increased the amount of complexity in the profile significantly. This is easily one of the best cigars I have smoked this year in a vitola I adore.