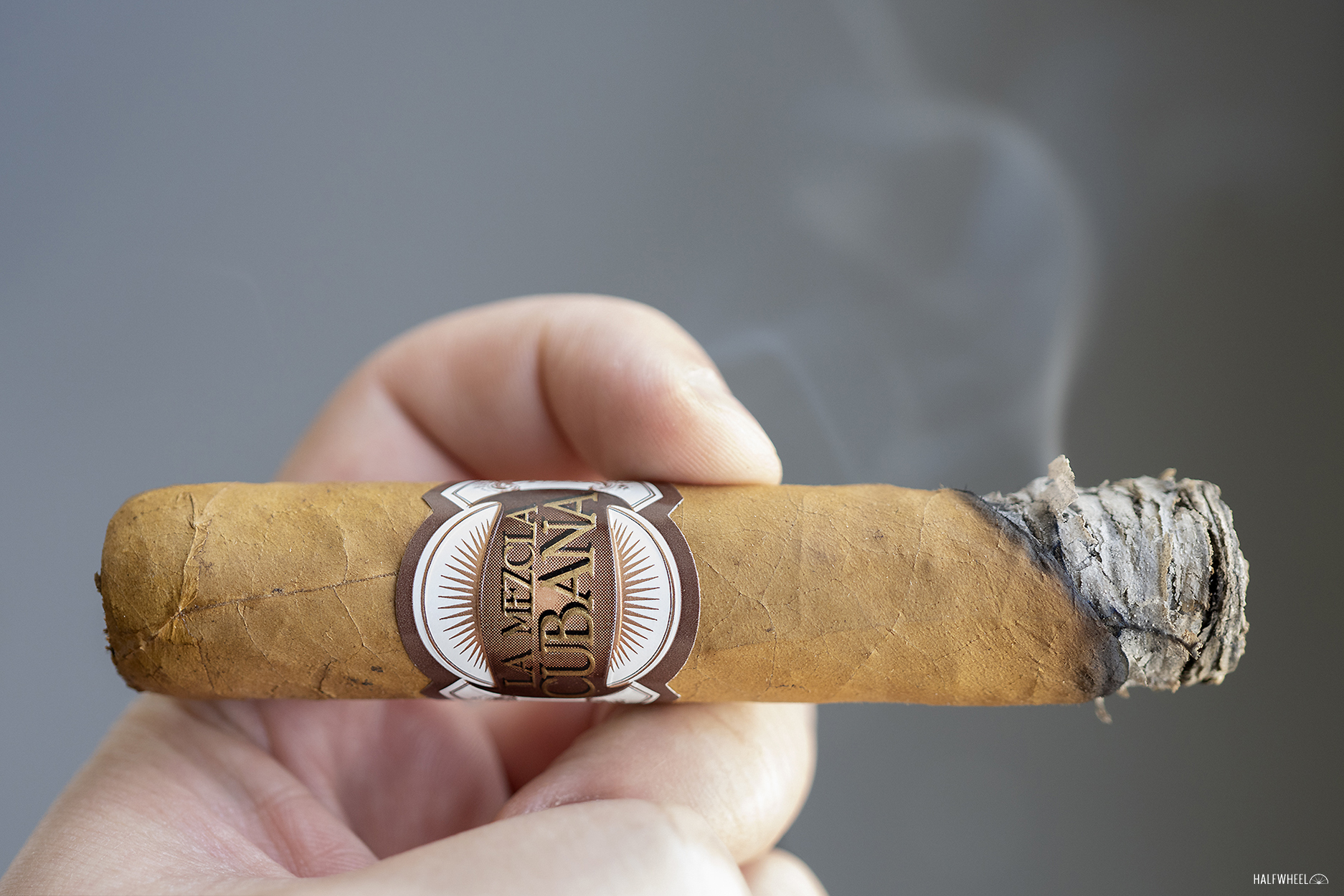 While it wasn’t apparent to me until I started writing this review, United Cigar Group is one of the more multi-faceted cigar companies that exists today. The company is owned by Dave Garafalo, who also owns Two Guys Smoke Shop, one of the largest family-owned cigar retail operations in the country. United—which goes by both United Cigar Group and United Cigars—has its own brands, many of which have been sold at Two Guys Smoke Shop at one point or another. It also distributes other brands, most notably the Selected Tobacco portfolio that includes Atabey, Bryon and others. But it’s probably best known—especially on this website—as being the distributor of the Firecracker Series of cigars, which is a specific vitola designed to look like a firecracker that more than a dozen companies have made for the company over the years. 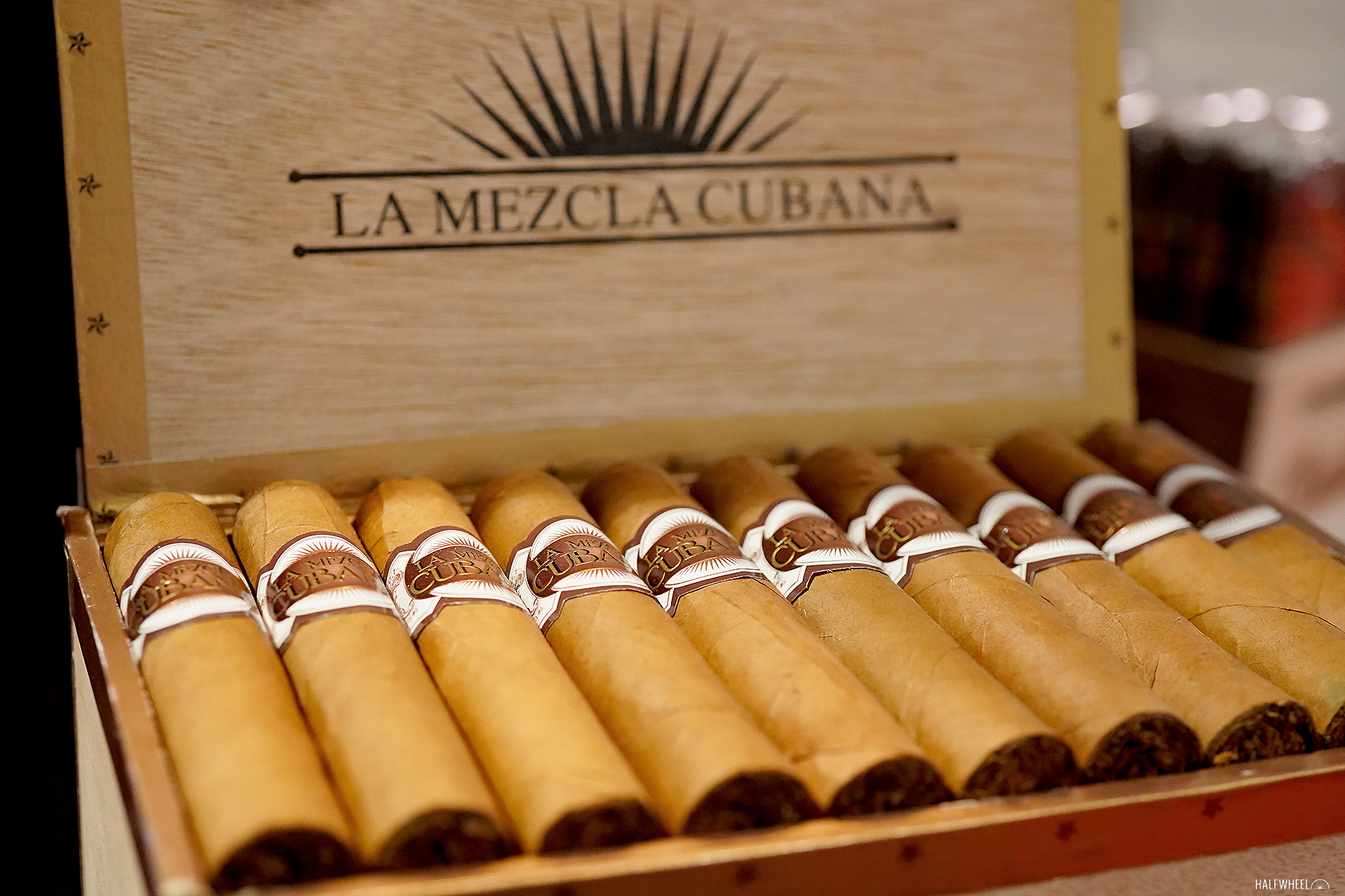 La Mezcla Cubana was started by Victor Vitale, another cigar distributor in the northeast, who owned a company called Legacy Brands. Vitale sold La Mezcla Cubana to United, who opted to relaunch the brand earlier this year. It came back in a single 4 1/2 x 54 parejo size that the company is calling Rothschild, and using a seven-year-old Ecuadorian Connecticut shade wrapper over an Indonesian binder and fillers from the Dominican Republic, Nicaragua and Pennsylvania. It’s pretty rare that a company will talk about which grower it buys its tobacco from, but United made it clear that this wrapper came from ASP Enterprises, Inc., one of the largest growers of cigar tobacco.

If you haven’t heard of ASP, it’s by design. The Perez family, which owns ASP, prefers to keep a very low profile. While most cigar manufacturers are very familiar with ASP, if not clients of the company, the Perez family does not publicly boast about the company. While ASP grows tobacco in many countries, one of its specialties is the Ecuadorian Connecticut wrapper that is being used for this cigar.

As of now, there’s just one size and one blend for La Mezcla Cubana. 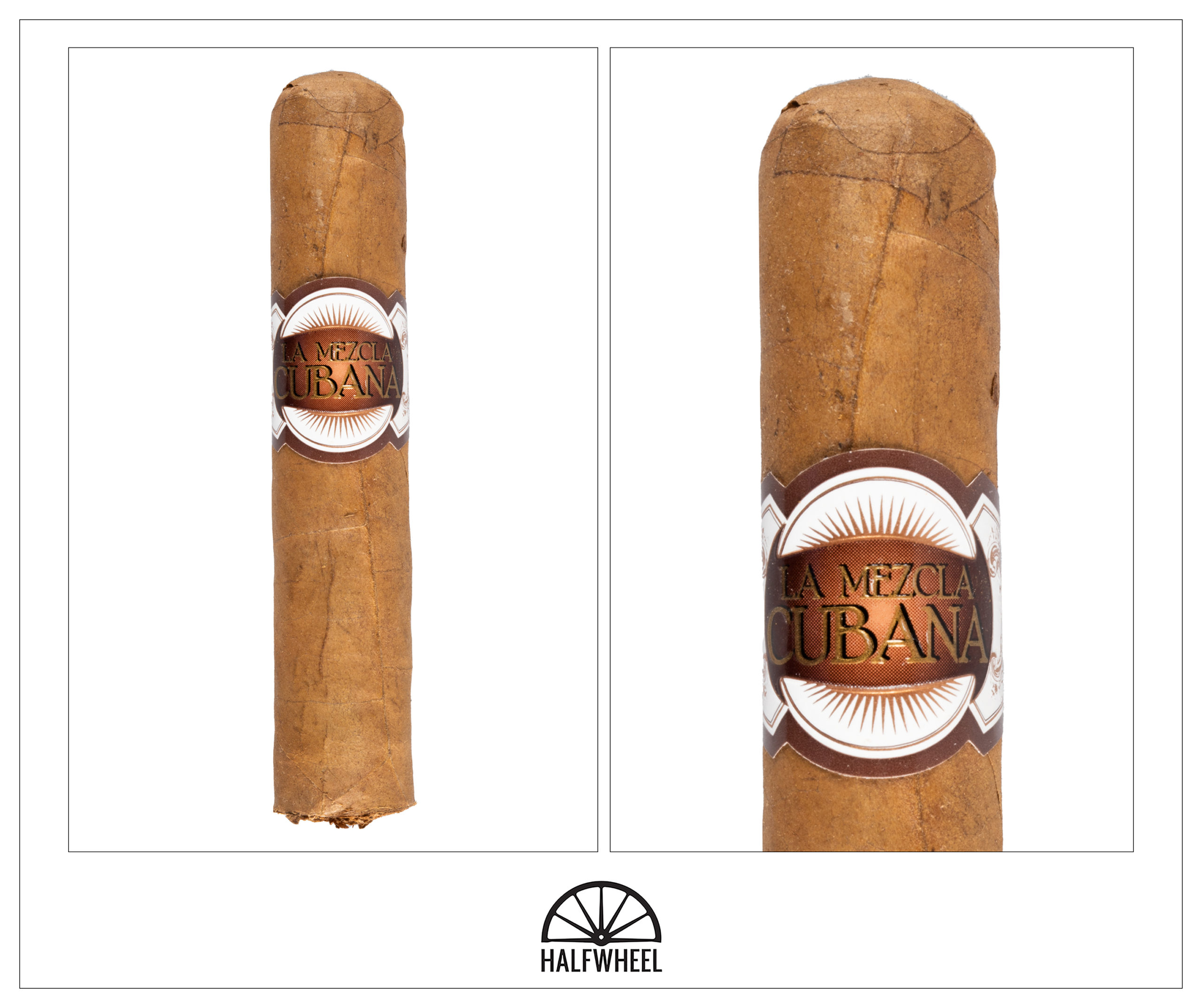 My first thought is that this is what I think of regarding the dimensions of a Rothschild, which I’ve come to understand as a 4 x 50 cigar. As for how the cigar looks, I’d give this shade wrapper a B or B+ grade on the A-F scale used in schools, which is not the same as how tobacco is graded. The reality is most of the Connecticut shade tobacco I see looks pretty good because lots of the uglier stuff gets used as binder or as wrapper for cheaper cigars, so even minor flaws like this disqualify this wrapper from being in the top 10 percent of pretty wrappers that I see. It’s pretty uniform in color with some minor discoloration, noticeable vein structures and on one cigar, a green water spot right above the band. There are some other minor issues: one cigar’s cap is a lot bumpier than normal and I find that the cuts of the wrapper could be a bit more even. The aroma from the wrapper reminds me of a box of graham crackers along with some notes of hay and something that reminds me of an open can of paint. The foot is medium-full with sweetness, a different type of chemical flavor—though it’s still somewhat similar to paint—along with some generic raw sugar sensations. Cold draws are nearly full and remind me of a Starbucks drink with chocolate—sweet with chocolate edging out coffee—along with some plaint flavor. Interestingly, while I find the flavors to be a bit stronger on the cold draw than the aromas, the cold draw flavors aren’t as crisp as the aroma was.

The La Mezcla Cubana Rothschild starts with earthiness, sweet creaminess, minor amounts of black pepper, some saltiness and walnuts. After five minutes, the cigar has morphed into a familiar flavor profile. It tastes like a lot of other cigars with Ecuadorian Connecticut shade wrappers, though there’s not much black pepper. Instead, the flavor is led by a balanced mixture of creaminess and nuttiness with just a mild amount of black pepper and earthiness underneath. I find the individual flavors themselves to be very fragrant and smooth. The finish is drier with the nuttiness and creaminess joined by some lime skin. Retrohales have apple, creaminess, burnt bread and a generic toastiness, and similar to the main flavors, I find each flavor to be fragrant, interacting with my palate in a unique and pleasant way and never wearing out its welcome. The finish has apple, chicken broth, nuttiness and leather. Flavor is medium-full, body is medium, strength is mild-medium. While the burn is not very even, I avoid needing to touch up the cigar with a lighter. Sometimes it seems that the smoke production is decreasing, but whenever that happens I just puff quicker and that helps to solve the issue.

While the list of flavors is more or less the same as the first third, most of the flavors have changed in some way. The nuttiness is both drier and sharper than before, the creaminess is more vibrant than the first third and the pepper is now more white pepper than black pepper. In addition, I find some dry leather, a flavor I didn’t pick up in the first third. The finish is also drier with lots of nuttiness dominating wheat bread and some black pepper. There’s even more nuttiness on the retrohale, though I’m not sure it’s as intense as the finish of the main flavor. I also taste something that reminds me of the semisweet internal parts of a Butterfinger along with some minor amounts of chemical flavors like paint. The finish has nuttiness, though not as dominant as the other parts of the profile. There’s sourdough bread, touches of coarse kosher salt and a bit of black pepper. Flavor is full, body is medium-full and strength is medium. Eventually, my strategy of just trying to push through the burn issues doesn’t work and I’m forced to use my lighter on two cigars. 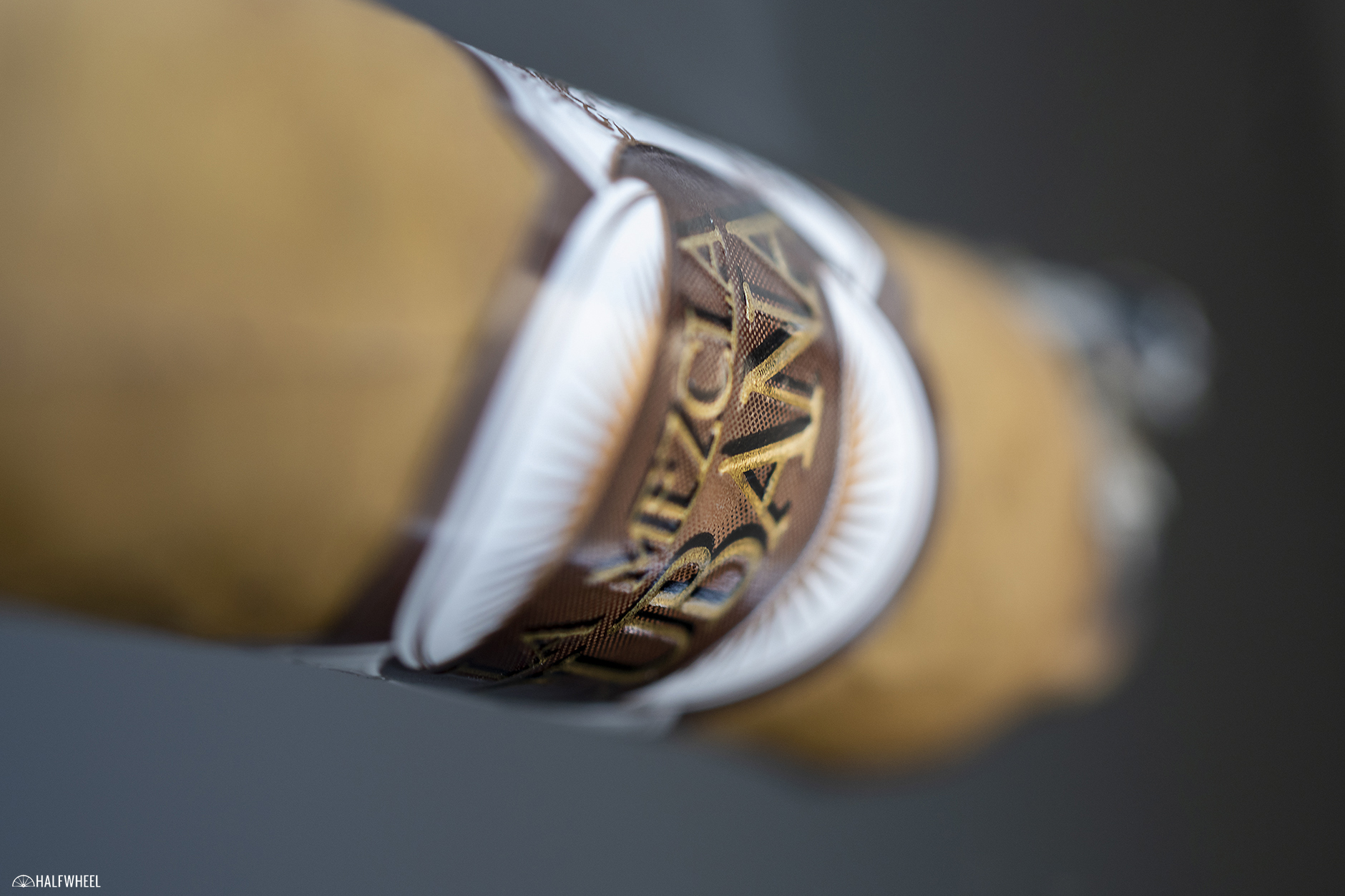 The La Mezcla Cubana continues to be led by nuttiness, but a meatiness has almost matched the nutty flavor’s intensity. Beyond that, it’s tough to find other flavors; some black pepper and creaminess are quite mild, but I’m surprised by the relatively limited number of flavors. The finish sees the black pepper build to its strongest point so far and it gets even stronger the longer I wait in between puffs. Retrohales have nuttiness, creaminess—more like the first third than second third—black pepper and some herbal touches. Once the smoke exits my nose, there’s lots of bread over nuttiness, black pepper, creaminess and some saltiness. Flavor ends medium-full, body is medium-full and strength is medium. Two cigars need touch-ups in the second third, though the burn lines on all three are quite ugly. 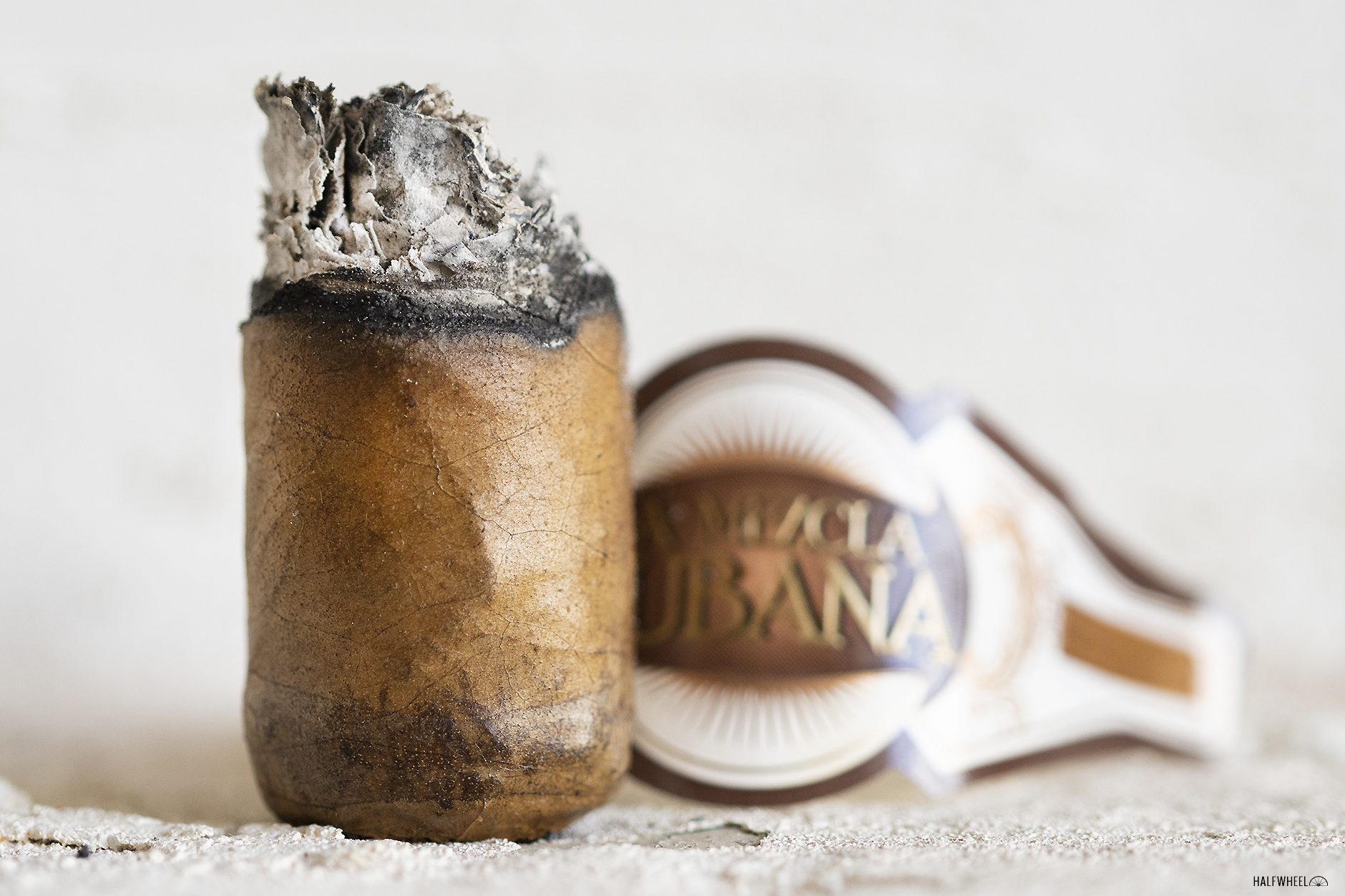 The La Mezcla Cubana is neither a complex cigar nor really a revolutionary cigar. It’s a more refined version of lots of classic Connecticut shade profiles, but without the steady black pepper note that I typically find from the lightly-tanned cigars. But just because it’s not the unique cigar in the world doesn’t make it bad. Flavor-wise, this was as enjoyable as any cigar I’ve smoked for review during the last few weeks and I would gladly smoke a lot more of these, especially for the price. My one gripe is with construction, not just for the burn issues that took away points from the final score, but also for the uneven burns that weren’t part of how this score was calculated. In the end, I think the La Mezcla Cubana Rothschild is a very good cigar with a better price point.