Say the word Fresno, and cigars are likely not the first thing that come to mind. In fact, they don’t come to mind at all. Yet, that’s where Dapper Cigar Co. is located, an “artisanal” cigar company that has been in operation since 2013 and has built up an impressively sized portfolio of cigars coming from a handful of well-known factories.

Like a number of brand owners, Ian Reith entered the cigar industry from the consumer side, at first wanting to make a single cigar. He comes from the tech world, working as a network communications engineer for a large group of hospitals in California’s central valley, as well as starting a small software company that writes custom software for the education sector.

In building his line, he said he wanted to avoid the gimmicks that he felt were too prevalent in the cigar industry and instead focus on making brands and cigars that were simultaneously nostalgic and fresh. To do so, he enlisted the help of Dan Gretta on the aesthetics side, while a neighbor of his, Chris Alvarez, prompted the company’s name. A barber by trade with a focus on old-school cuts, he looked at one of Reis’ first creations and remarked, “now that’s a dapper cigar.”

La Madrina, which means godmother in Spanish, is one of several lines offered by Dapper Cigar Co. It’s available in both a natural version, using an Ecuadorian habano wrapper, or a maduro, though its wrapper’s origin is not being disclosed until it gets its wide release in early 2019.

The wrapper comes from Oliva Tobacco Co.’s La Luchita farm, though the company had previously been using tobacco from the La Meca farm. Underneath the wrapper is a Mexican San Andrés binder and a quartet of fillers: Nicaraguan leaves from the Guadalupe farm in Estelí and the Cofradia Relleno farm in Jalapa; some Dominican habano 92, and Pennsylvania broadleaf.

Both the natural and maduro are being produced at the Nicaragua American Cigars S.A. (NACSA) factory in Estelí, and are offered in three sizes, each in 20-count boxes. 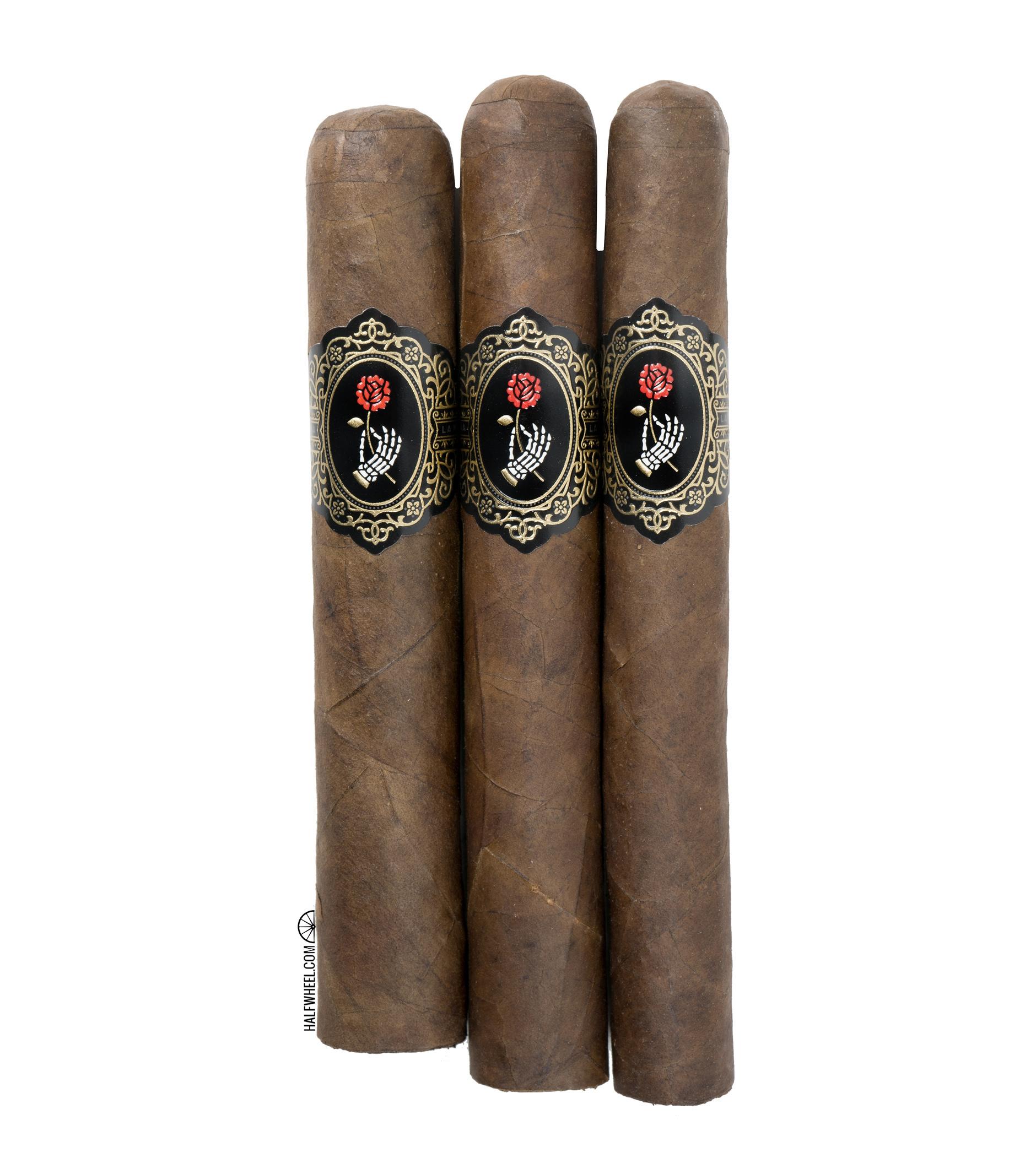 Reith is upfront with his inspiration for the line, telling SmallBatchCigar.com:

I’ve always been real fascinated with Day of the Dead / Santa Muerte artwork and branding… I just couldn’t get the right take on it for application to cigars. Then, John (sic) Huber from Crowned Heads released Las Calaveras… which I was super impressed with. So I really just wanted to one-up them.

He adds that the idea of Sante Muerte “highlights life and death in beautiful imagery,” though acknowledges that while it might not be the best tie-in for cigars, it gives him “a personal reminder to me to live life to the fullest extent knowing at any time death can be right around the corner.” He calls it a cigar for the seasoned smoker who craves intensity and complexity all at once.

In addition to the La Madrina line, the company makes six variants of its square-pressed Cubo line, with the Claro and Maduro options made at Tabacalera Carreras S.A. in Estelí, the Cameroon and Corojo made at La Aurora in Santiago, Dominican Republic, and the Sumatra and Oscuro made at NACSA. Additionally, the company offers the El Borracho Natural and El Borracho Maduro lines, the Siempre Rosado and Siempre Sun Grown, and the Desvalido Natural and Desvalido Maduro, all of which are made at NACSA. 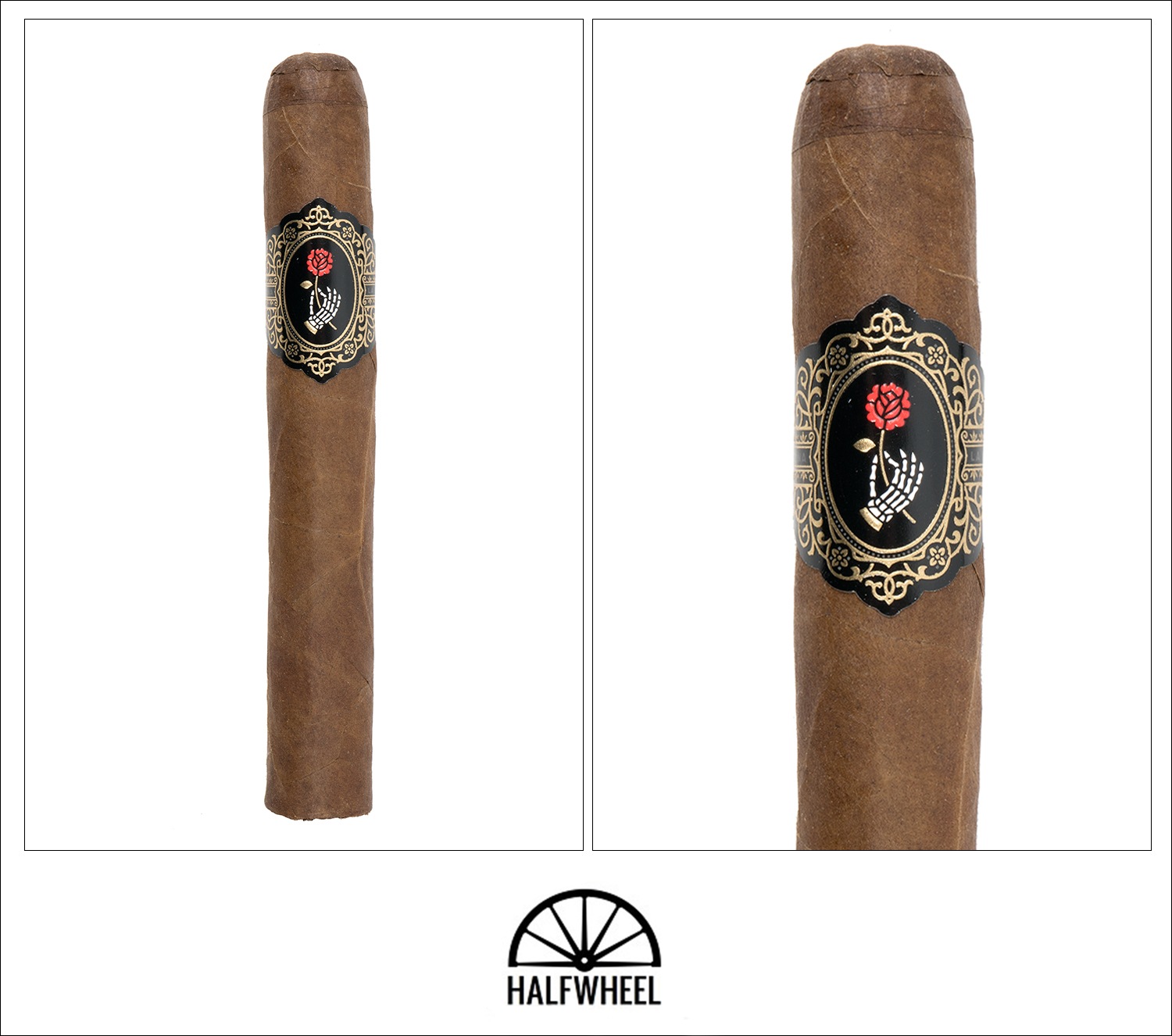 I really like the band on the Dapper La Madrina Natural Robusto; the artwork is simple but eye-catching and immediately lets my mind run into the meanings behind it, as well as capturing some of the Dia de los Muertos art that I have come to love since moving to Phoenix. The cigar itself is decent looking on the whole, though closer inspections reveal some shade variations on certain leaves, an intricate network of veins, and some a few seam lines where I can quite rectify what I’m seeing. It’s a firm roll with some bumps in places, creating a bit of a visual distraction, though the simple cap is applied well. The foot offers a freshly poured bowl of Corn Flakes or Frosted Flakes depending on the sample’s sweetness, though without the creaminess of milk being added. There’s also a bit of fragrant orange citrus, not so much suggesting the fruit but rather a bit of room spray or aromatics. The cold draw is smooth and offers just the right firmness, carrying a heavier and more bread-laden note than the aroma, also with a bit more upfront honey sweetness.

Things get off to an interesting start in the first cigar; what I thought was a slightly loose piece of tobacco on the foot reveals itself to be a separate piece that peels off once the cigar is lit. While I considered gluing it back down, once I realized it was a patch that wasn’t properly secured, I let it fall off nearly entirely of its own accord. Interestingly, I didn’t see the reason for it; while there is some mottling, I think the cigar looks better without it, and there are no holes or poor cuts on the wrapper. As for the smoke, it’s fairly average in terms of flavor, medium bodied with notes of woods, pepper and a bit of cereal grain, with what little sweetness is there suggesting dairy creamer or half-and-half. There’s more pepper through the nose, and it’s quite good, if familiar, a term that I find myself contemplating as the ash builds to an inch and resists an attempt to shake it free. This is a familiar cigar, almost as if I’ve smoked it before, though I’m not exactly sure where. A relight is needed in conjunction with the ash coming off—though the latter happened first—and the cigar is still putting out a peppery smoke through the nose, with a bit for the palate on top of some dry tobacco and generic woods, which have shed the cereal grains and sweetness. 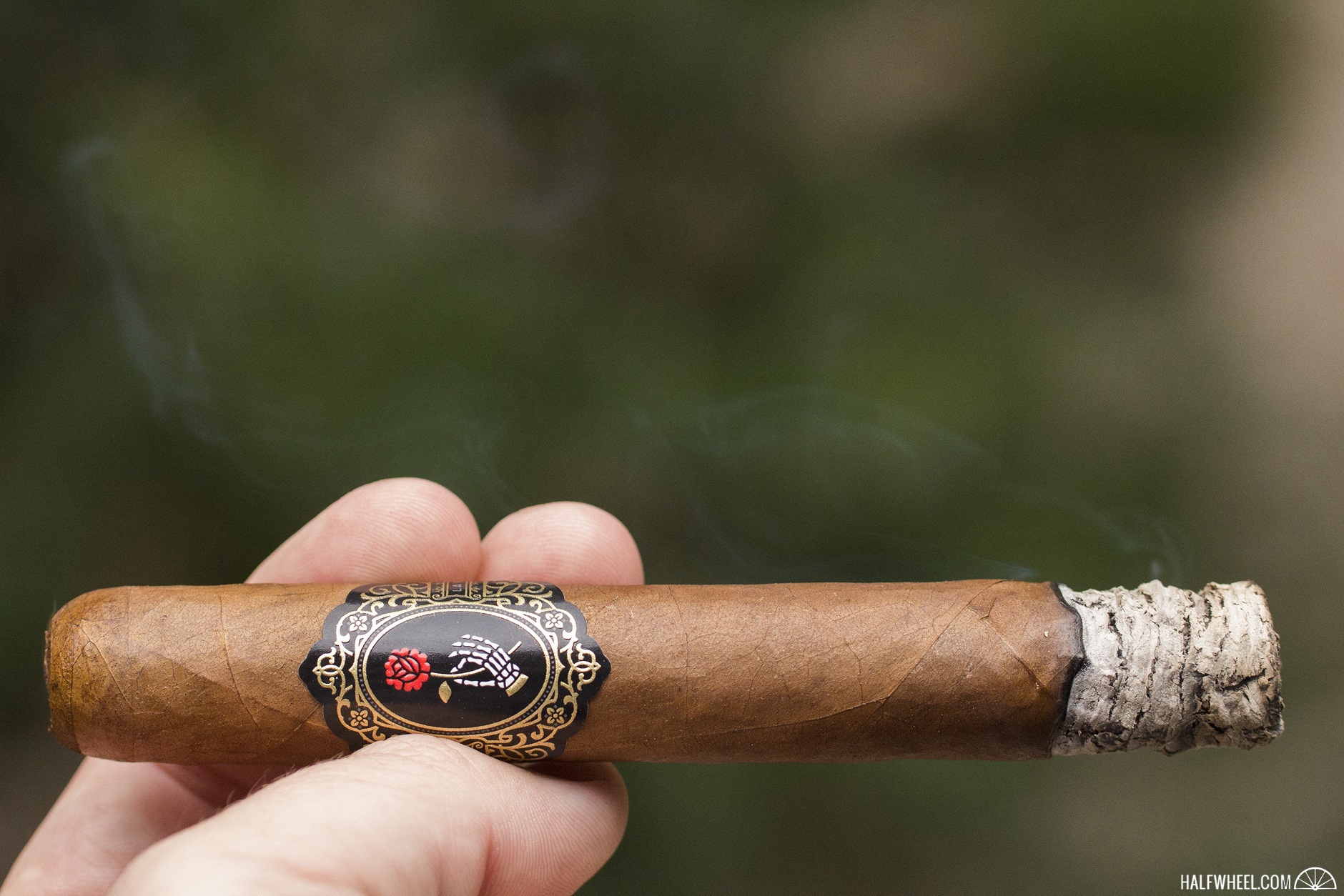 About the time I get into the second third of the first sample, I notice a few small cracks developing in the wrapper, mainly near the head, though none seem to be causing an issue at the moment. The flavor stays fairly consistent, backing off the palate-grazing pepper if anything while leaving the retrohale alone. I recently wrote about a cigar becoming so familiar and sessionable that it slips off the radar, and I’m beginning to sense that happening here; thankfully the retrohales prevent that from happening completely and while very familiar, the flavors are generally solid. A bit of marshmallow sweetness comes out just beyond the midpoint, teasing the dairy creaminess from earlier but spinning just enough to be distinct. Meanwhile, the cereal and bread notes continue to form a medium-bodied base that continues to be the foundation of the cigar. The balance of sensation shifts significantly to the nose at the midpoint, even without an honest retrohale, as some ambient smoke off a puff wafts up and does the trick. The draw remains quite good, smoke production is a bit above average, while combustion struggles at times and warrants a full relight. 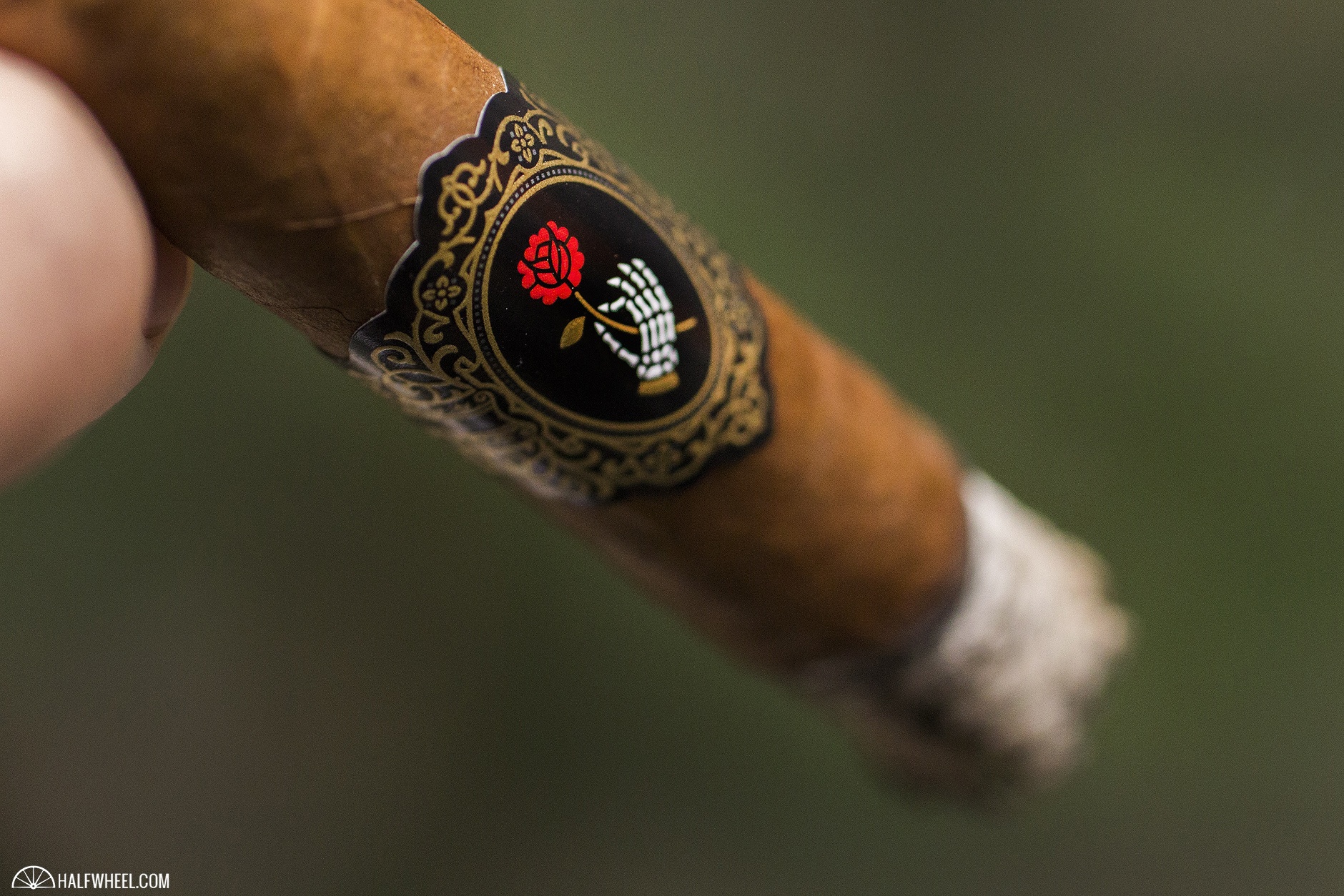 There’s still not much change in the La Madrina’s profile heading into the final third, though that’s not inherently a bad thing as the flavors and strength have stayed remarkably consistent from the first puff. Retrohales remain quite pepper-laden, though not so much so as to avoid them unless it is too much for your liking. Once the burn line reaches the band’s area, the pepper gets a bit harsher, and I can feel some irritation towards the back of my throat, which is quickly remedied with a sip of club soda. The first sample’s cracked wrapper becomes a bit more of an issue as the split has grown and the leaf is starting to separate from the binder, though I’m optimistic it won’t become an issue. Meanwhile, the harshness of the smoke continues to increase, and with an inch-and-a-half to go, I’m doubtful the cigar will be able to turn things around, at least not without slowing my puffs down so much that I get into a battle of relighting the cigar time and again. There’s a bit of chalk added to the flavor, Other than some combustion issues and the split wrapper, it has burned quite well with no major qualms. 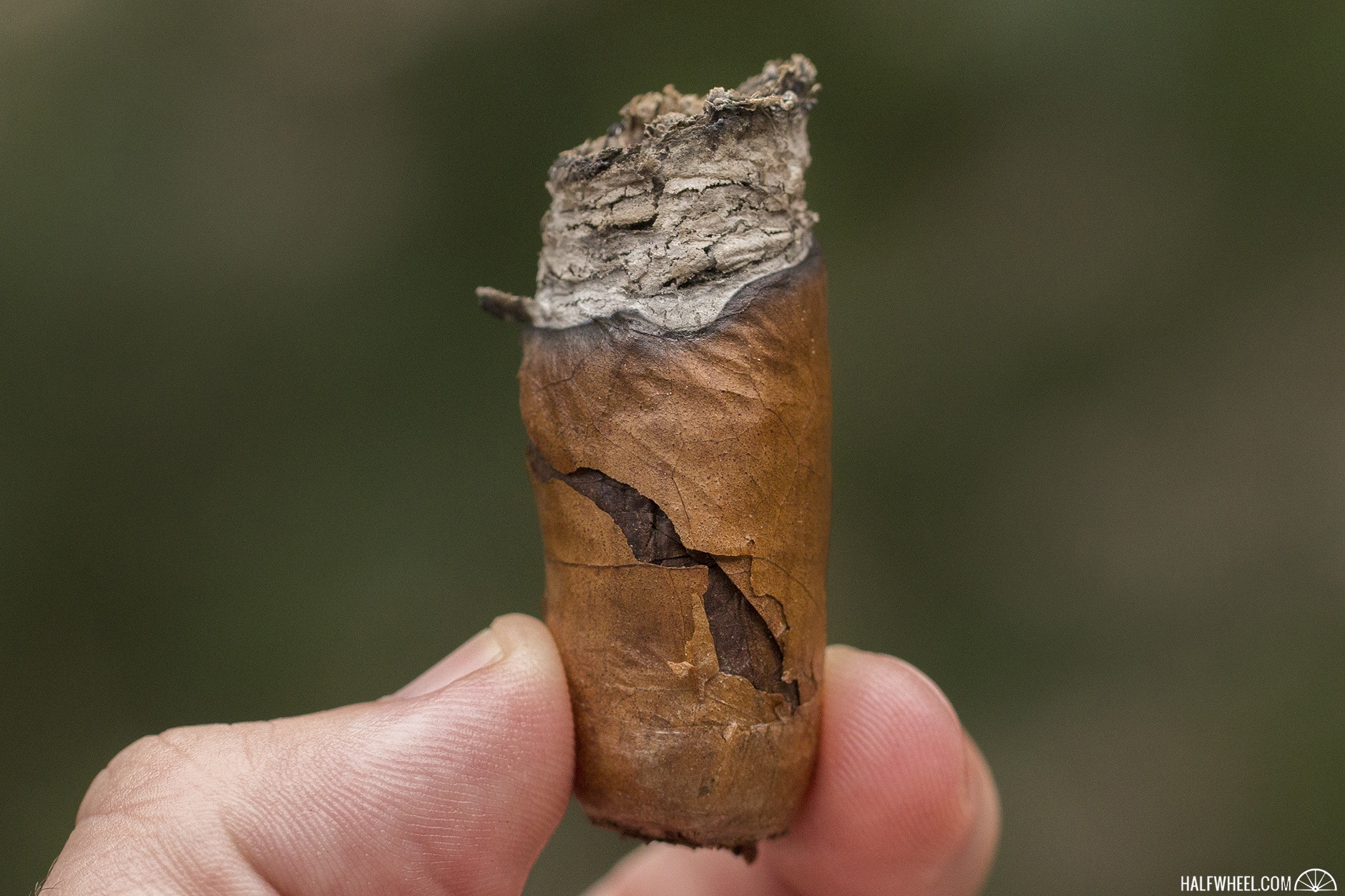 The Dapper La Madrina Natural Robusto is an intriguing cigar, as I found it to be incredibly familiar and enjoyable, at least for the first two thirds. The final third struggled in two of three samples, which cost the score some points, though it did manage to be remarkably consistent in its flavors and progressions. For as many varietals of tobacco are used in this blend, I was surprised that there wasn't more complexity, but what was there was enjoyable. I'd certainly smoke the first two thirds again without hesitation, and I'm certainly intrigued to see what else this company's portfolio holds.