For much of 2017, not much was written about La Barba.

Outside of changing the bands for its existing lines, Tony Bellatto’s company was pretty quiet. But 2018 has been a different year and there have been two distinct new releases. The first of those was the second cigar in La Barba’s One&Only Series, while the other is an entirely new line, Ricochet.

Ricochet wasn’t always Ricochet, however. When it was announced in June 2018, Ricochet was originally known as Primitivo, though shortly after it was announced, there were indications that it would be changed as Santa Clara, Inc.—better known as JR Cigar—has the trademark on Primitivo.

While the name is now Riochet, the blend is the same as when the cigar was announced, a Mexican San Andrés maduro wrapper over an Indonesian binder and Dominican, Nicaraguan and Pennsylvania fillers. Production is being handled by Tabacalera William Ventura in the Dominican Republic.

It’s offered in four sizes, each sold in 25-count boxes. While I like the color orange, it certainly isn’t very common for cigars. I think it works here, but I understand the orange on brown color combo isn’t a favorite for many. Aroma off the wrapper first smells like burnt wood, then like the cheese packet of Kraft macaroni and cheese, or at least how I remember Kraft mac and cheese, as I haven’t had it in a while. Aroma off the foot is fuller with the mac and cheese packet flavor, earthiness, graham cracker and creaminess. The cold draw is a bit more open than I want it to be, though I think most people would probably prefer it to be there. Flavors from the cold draw include apples, earthiness, Life cereal and white pepper.

The La Barba Ricochet begins very fruity before cedar, soy sauce, paprika and earthiness come along. It’s full, smooth and the draw is extremely easy. While the fruitiness sticks around on the retrohale, the main flavor develops into notes of hickory with duck sauce sweetness and earthiness. The retrohales have oranges, Nilla Wafer and dry crackers. White pepper shoots down the back of the throat, though it’s a bit restrained. There’s some mild pepper on the tongue in the finish, but like the part down the throat, it too is pretty restrained. Flavor is full, body is full and strength is medium-plus. 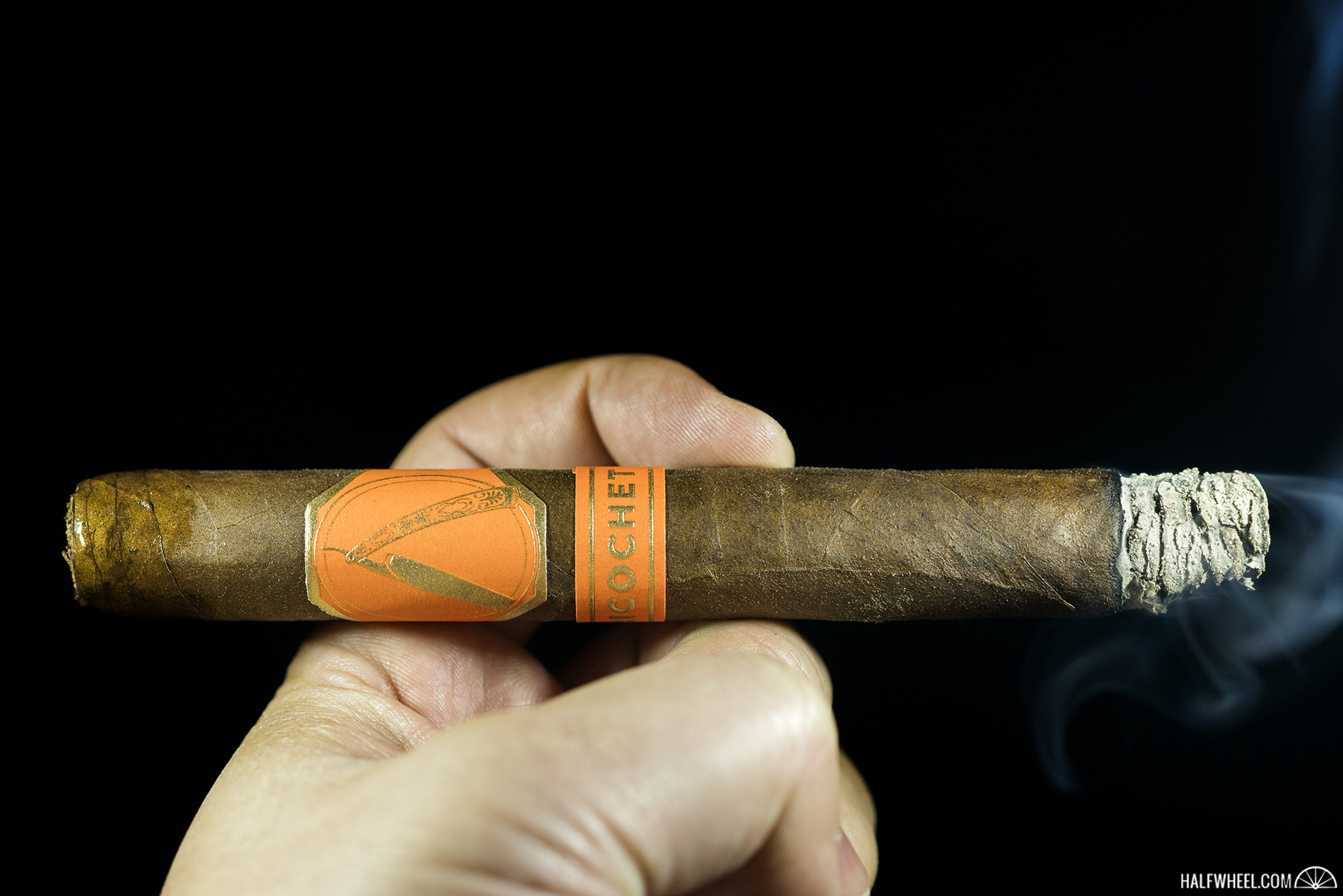 There are three different flavor sensations all competing against in the second third: pine; walnut and toastiness; and some butterscotch candy sweetness. Retrohales have a grain character, leather, some sourness and a sharp white pepper. While there might be white pepper when the smoke is leaving my nose, it’s also present on the finish, though only if I don’t retrohale. Smoke production and draw continue to be outstanding. Flavor is full, body is full and strength picks up noticeably to medium-full. 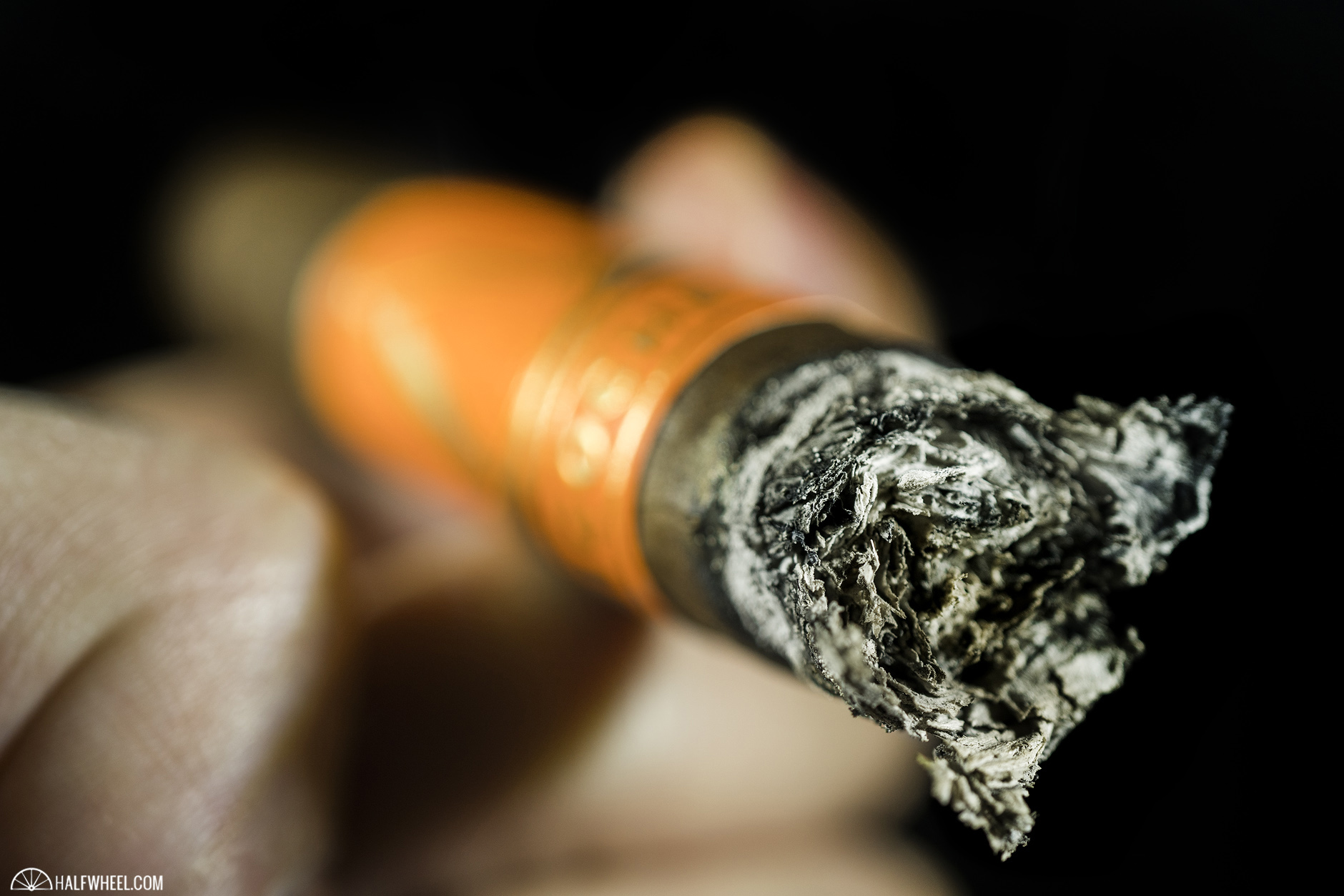 While the flavor is certainly quite different, the most apparent change in the final third of the Ricochet is the strength, which is now very much full. To go alongside the added nicotine effect, there’s a sweeter flavor with burnt caramel, creaminess and some faint yet sweet peanut butter that reminds me of Grandma’s cookies—the brand, not my grandmother. Retrohales have more of that subtle sweetness on top of earthiness, though both are drowned out quickly by a habanero-like pepper. In the second third, the pepper wasn’t present on the finish if I retrohaled, but now they leave my palate with just pepper, and a lot of it. Construction continues to be fantastic until the end, with the easy draw and copious smoke production leading to a relatively quick smoking time. If I had to list features for things I’d like to see in a cigar, I’d start with the basics—burn, draw, smoke production, flavor, balance—and eventually get to some more advanced characteristics. Shortly thereafter, one thing that would be mentioned would be that I typically like cigars that end stronger than they finish. In that regard, the Ricochet is excellent. It starts off with a diverse group of flavors with mild pepper and average strength. By the end of the cigar, each puff is delivering a ton of pepper and I can feel the nicotine. What holds it back from greatness is that the profile can seem chaotic with flavors constantly rearranging themselves and oftentimes, no one or two flavors standing out from the bunch. Still, the La Barba Ricochet is a good cigar and a pleasant reminder that if you want strength, your cigars don’t need to come from Nicaragua.