At the 2015 Procigar Festival, La Aurora showed off the latest entry in its Puro Vintage line, which had not seen a release since 2013. Dubbed the Puro Vintage 2006 111 Aniversario, the release was produced to commemorate the company’s 111th year in business.

While the three previous releases in the line have historically been made up of just one vitola, this newest incarnation actually features three different sizes: Preferidos (5 x 54), Robusto Gordo (5 x 54) and Salómon (6 1/2 x 50/60).

All three cigars were available in master cases, with each vitola packaged separately in boxes of 18 cigars. Only 500 master cases were produced, with each package carrying an MSRP of $1,000, or around $18.50 per cigar.

Blend-wise, the La Aurora Puro Vintage 2006 111 Aniversario cigars are composed of an Ecuadorian HVA wrapper covering a Brazilian binder and filler tobaccos from the Dominican Republic’s Ciabo Valley, Brazil and Nicaragua. As has been the case in previous releases in the Puro Vintage line, all of the tobacco used in the blend comes from one harvest, in this case from 2006. 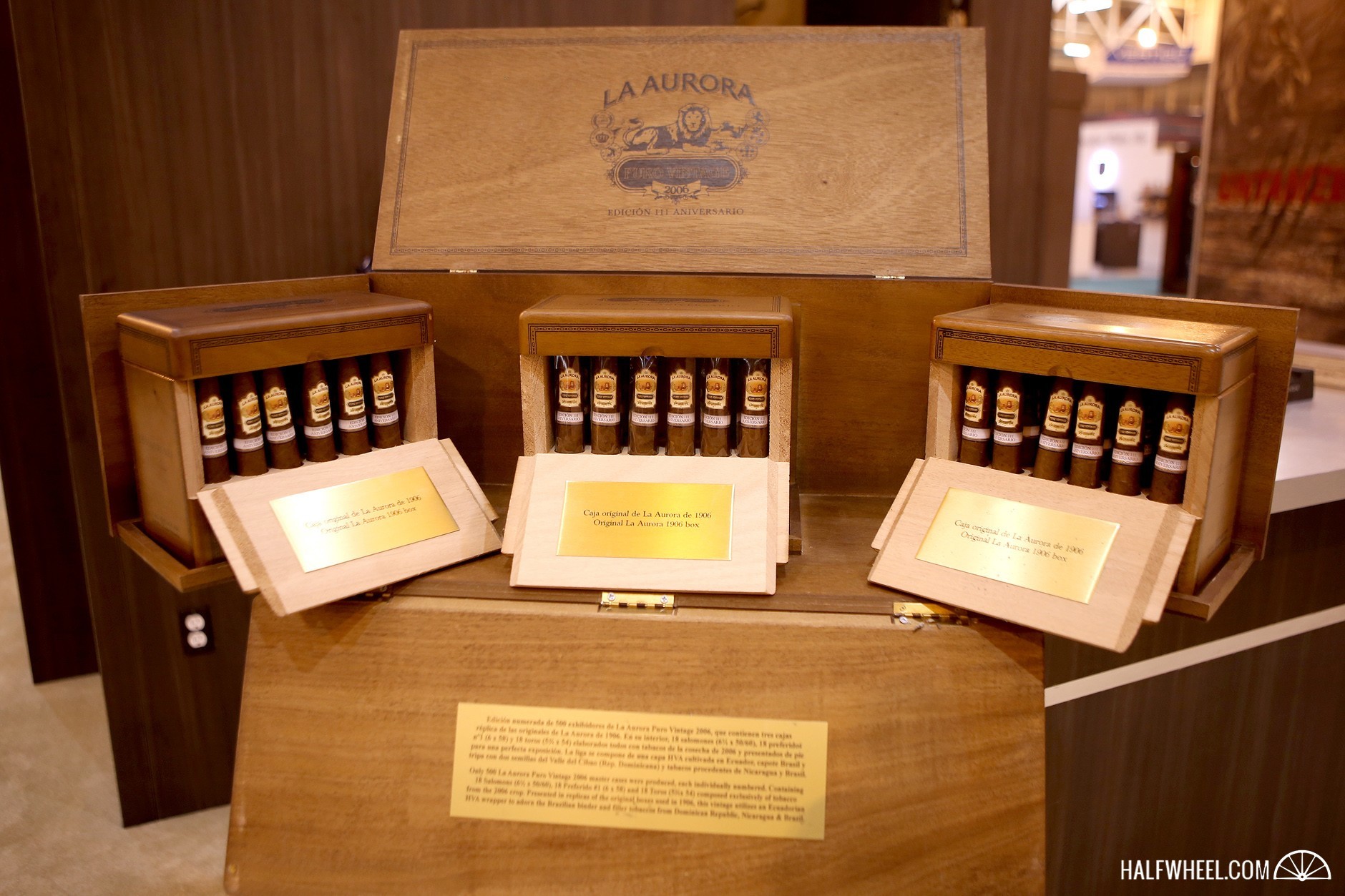 While there were three different vitolas released in Puro Vintage 2006 111 Aniversario line, only the Salomon size was sold separately and outside the master cases. In addition, unlike the three previous releases—which have all had a total count of either 12,000 or 8,000 cigars sold in boxes of eight—the newest incarnation has a total production of 27,000 cigars packaged in boxes of 18, with each cigar carrying a retail price of $18.62.

There have now been four different releases in La Aurora’s Puro Vintage line. 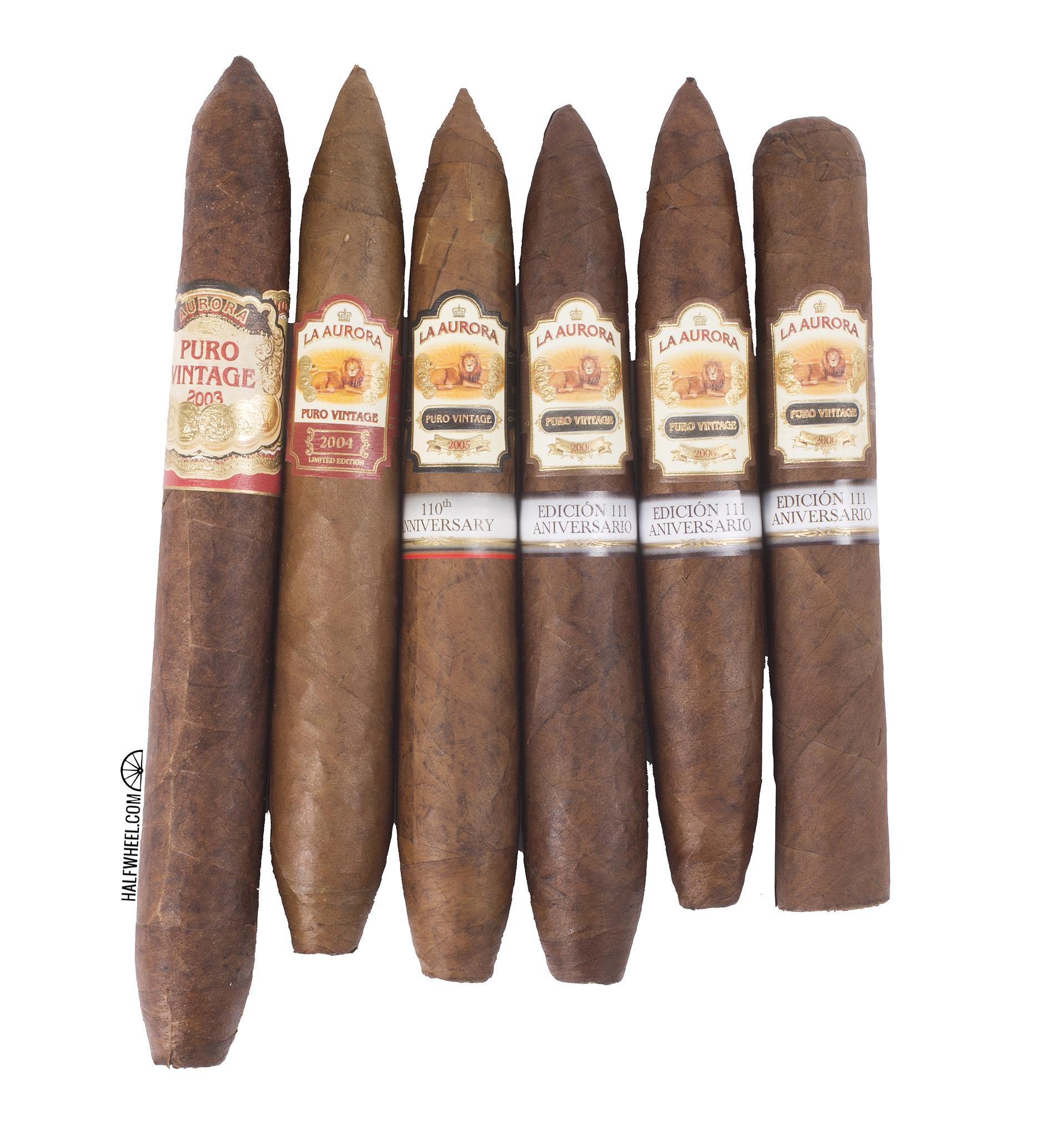 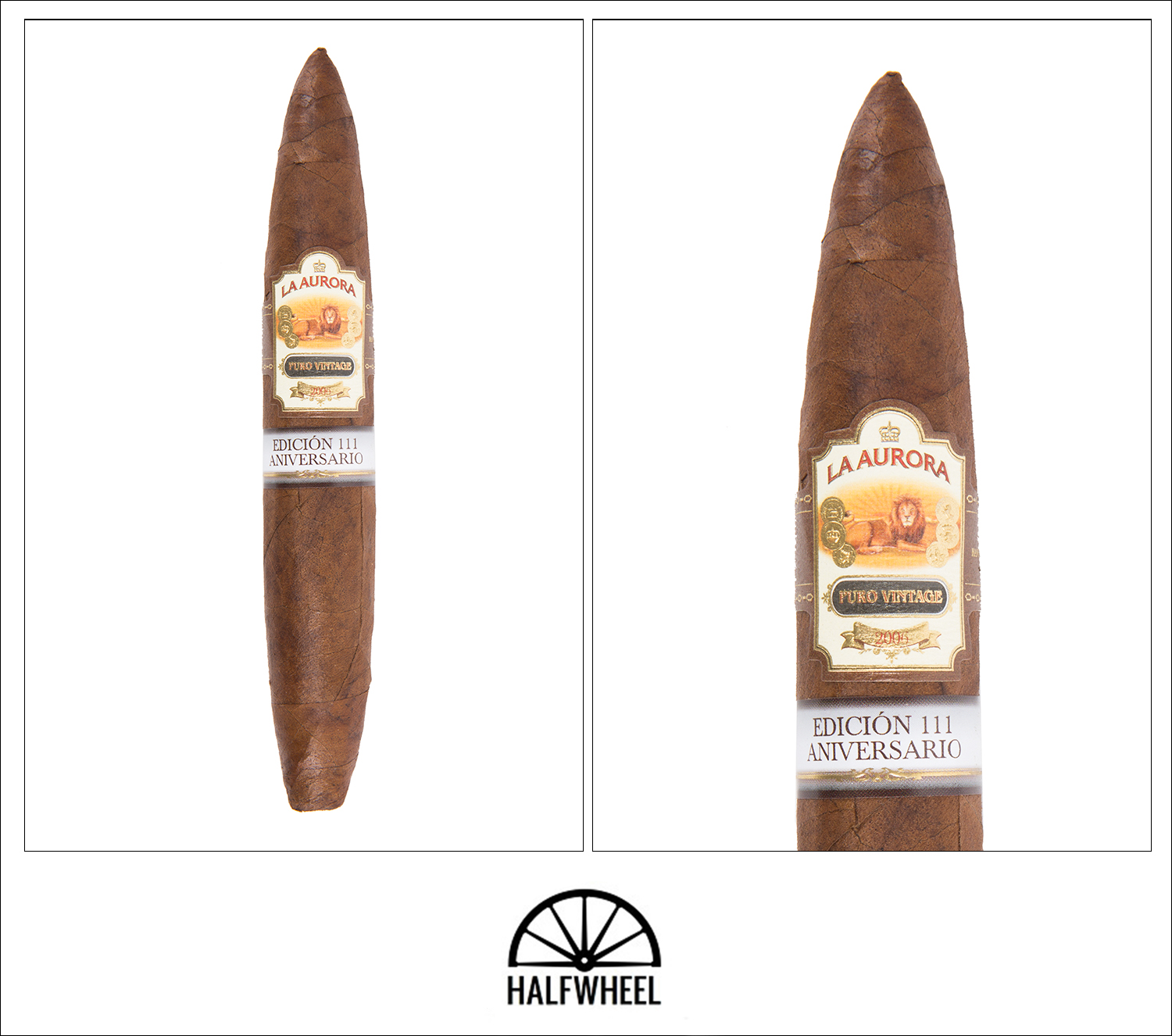 Visually, the La Aurora Puro Vintage 2006 111 Aniversario Preferidos is quite distinctive, with a milk chocolate wrapper that is smooth to the touch and features a touch of oil. The vitola is basically a double torpedo with a clean cut foot, and there are some fairly obvious veins running up and down the length. Aroma from the wrapper is a combination of espresso beans, dense and dark cocoa, earth, manure and slight black pepper while the cold draw brings flavors of strong and distinct milk chocolate, leather, earth, sweet nuts and pepper.

The La Aurora Puro Vintage 2006 111 Aniversario starts off the first third with a dominant combination of aromatic cedar and peanuts, interspersed with flavors of leather, ground coffee beans, cinnamon, tobacco, dark chocolate, baker’s spices and slight orange citrus. There is a touch of spice on my tongue as well as some black pepper on the retrohale, and I am picking up some cherry fruit sweetness as well, which really bumps up the overall complexity. The draw is excellent after a dickman cut while the burn is decent enough to not need correcting, and the smoke production is well above average off of the foot. Strength-wise, the cigar starts off noticably lower than medium, and while it does make some inroads by the time the first third ends, it still falls well short. 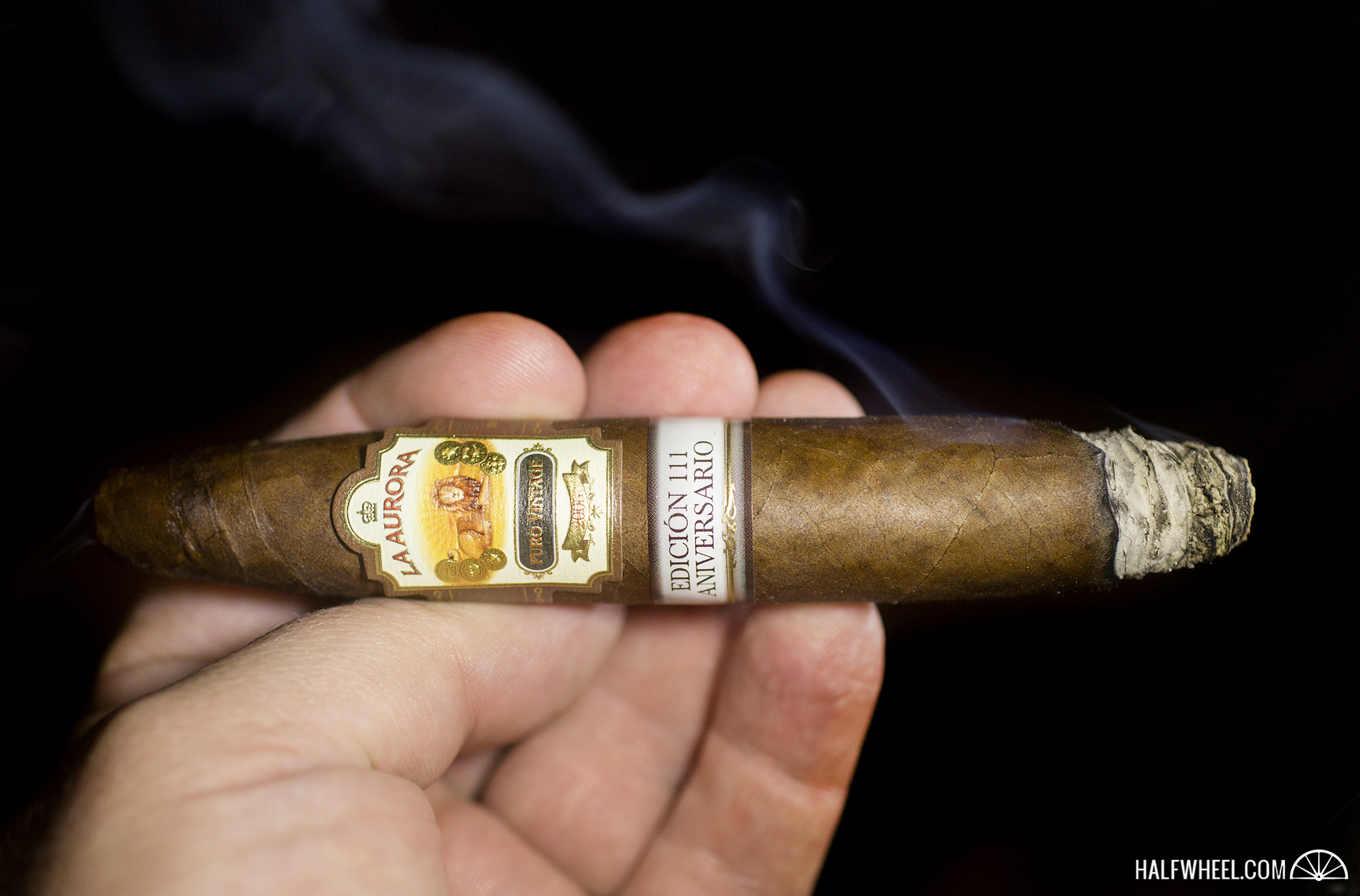 The dominant flavors shift during the second third of the La Aurora Puro Vintage 2006 111 Aniversario Preferidos, with a ground coffee and cedar combination taking the top spot, followed by baker’s spices, almonds, toast, graham crackers, cinnamon and dark chocolate. The cherry sweetness is both stronger and more distinct as I pass the halfway point, and there is still some pepper on the retrohale as well. Construction-wise, the draw is still excellent and thankfully, the burn has evened up nicely, while the smoke production remains dense. The strength increases a bit, but remains below the medium point by the time the second third comes an end. 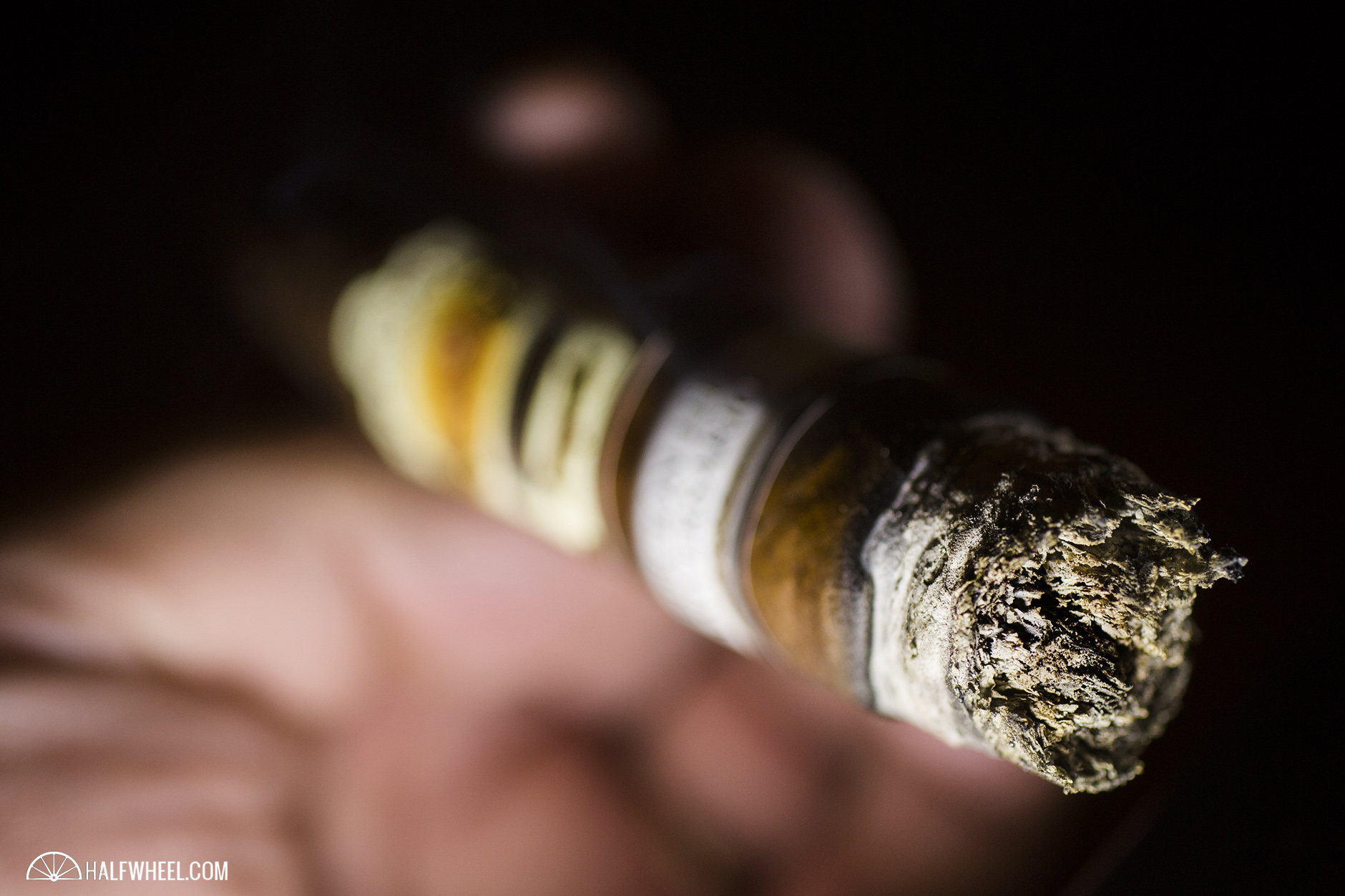 The final third of the Puro Vintage 2006 continues the trend of the previous thirds, with the combination of both cherry sweetness on the retrohale as well as cedar, ground coffee, hay, yeast, cinnamon, creamy leather and earth. Both the burn and draw are totally in sync, giving me no issues whatsoever, and the overall strength does finally reach the medium mark by the time I put the nub down with a little less than an inch left. 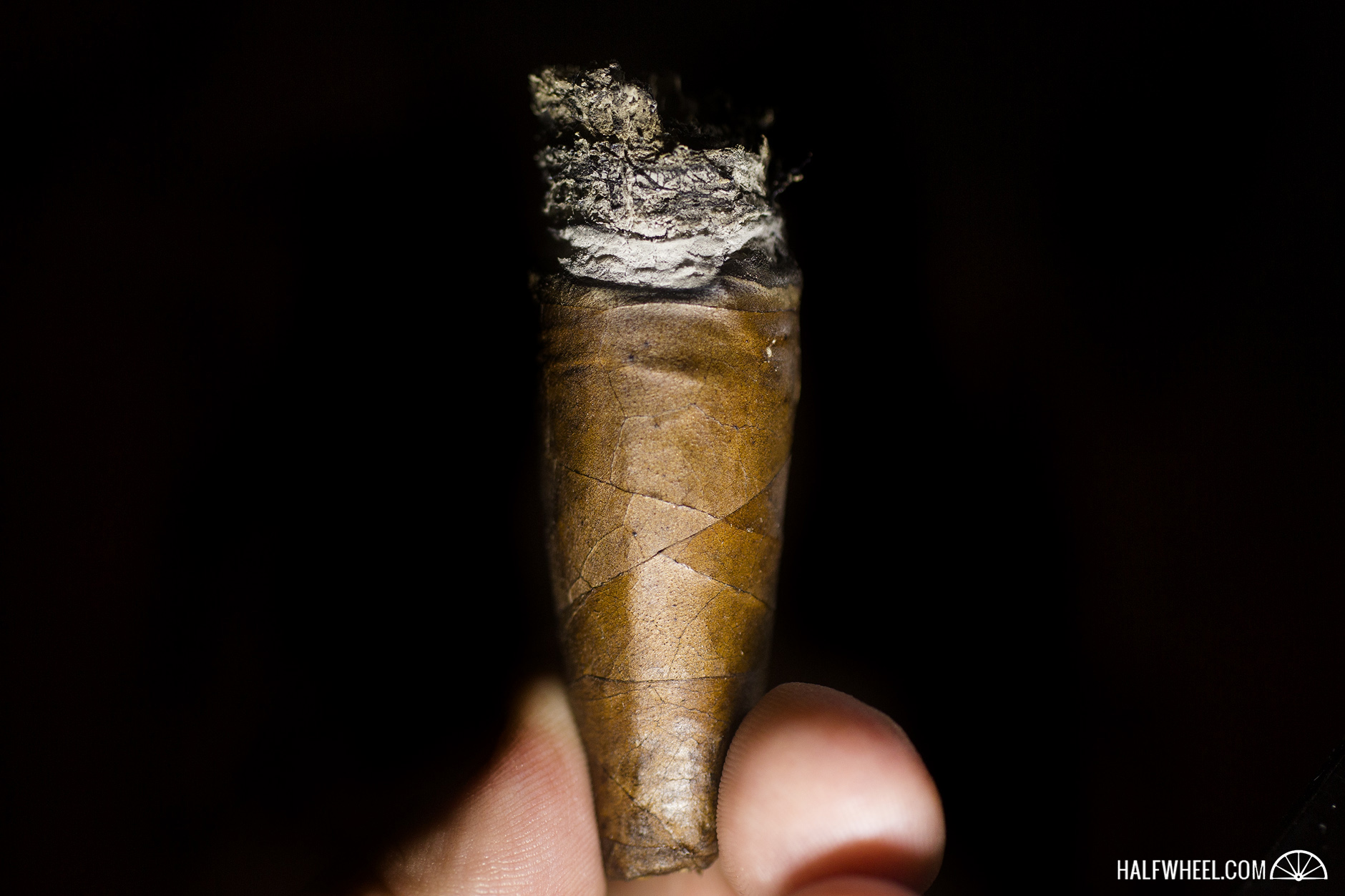 I have not been overly impressed with some of the releases in La Auras Puro Vintage series, but the Puro Vintage 2006 111 Aniversario Preferidos No.1 is easily my favorite out of the ones I have smoked. The profile is both full of flavor and nicely balanced, with a wonderful cherry-esque sweetness that runs underneath the rest of the notes that are present. Yes, the burn was somewhat annoyingly wonky for most of the first third, but if you can get past that, you will be awarded with an excellent cigar.