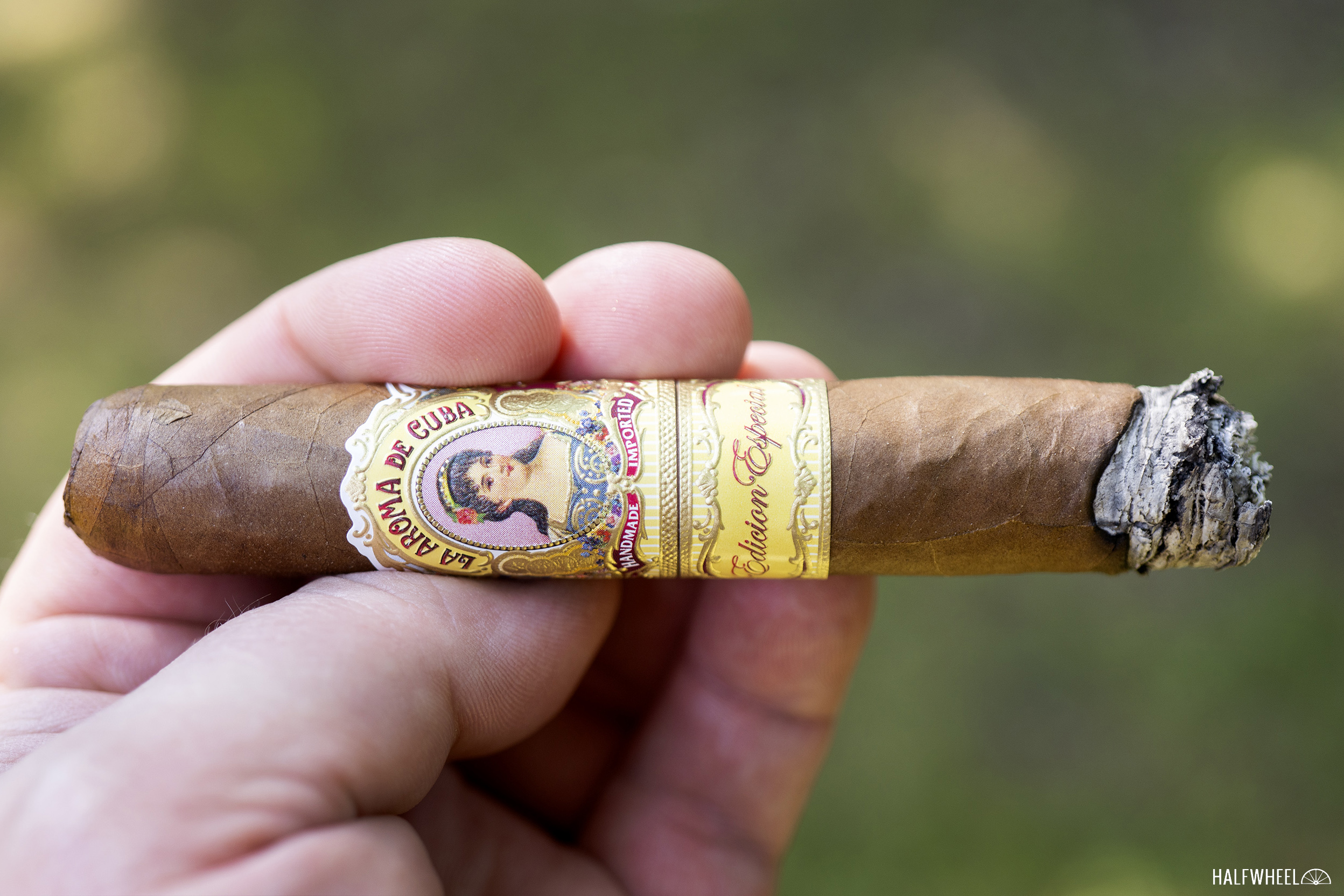 La Aroma de Cuba is one of those cigar brands that has seen numerous changes throughout its long life, starting in the late 1800’s, when it was a Cuban brand made with Cuban tobacco. The brand was discontinued at some point after that, but the trademarks were purchased by Ashton Distributors, Inc., which then released the first modern version in 2002 that was produced at the Flor de Copan factory in Honduras. In 2008, Ashton moved the production over to the García family and the then-brand-new My Father Cigars S.A. factory in Estelí, Nicaragua.

That same year, Ashton introduced a new incarnation of the line—also rolled at the My Father Cigars S.A. factory—named La Aroma de Cuba Edicion Especial, which was made with an Ecuadorian habano wrapper along with Nicaraguan tobacco in both the binder and filler. That line remained the same until earlier this year, when Ashton announced it had updated the brand.

There are a number of changes in the newest version of the La Aroma de Cuba Edicion Especial, but the tobacco it is made with remains the same, at least on paper. Specifically, the blend features an Ecuadorian habano wrapper covering both a binder and filler tobaccos grown in Nicaragua. However, according to Ashton, the blend is meant to be a little stronger this time around.

In addition, the line dropped two sizes—the 4 1/2 x 42 Minuto and the 5 1/2 by 55 No. 55—while adding a 6 x 60 vitola with the appropriate name of No. 60. The packaging has also been updated slightly, with the most obvious changes being both bands on the actual cigars: the main band now features the portrait of only one woman instead of two; and the secondary band, which now reads Edicion Especial instead of the EE that was historically used.

It is still made at My Father Cigars S.A.

There are six different sizes of the newest version of the La Aroma de Cuba Edicion Especia line, all packaged in 25-count boxes. 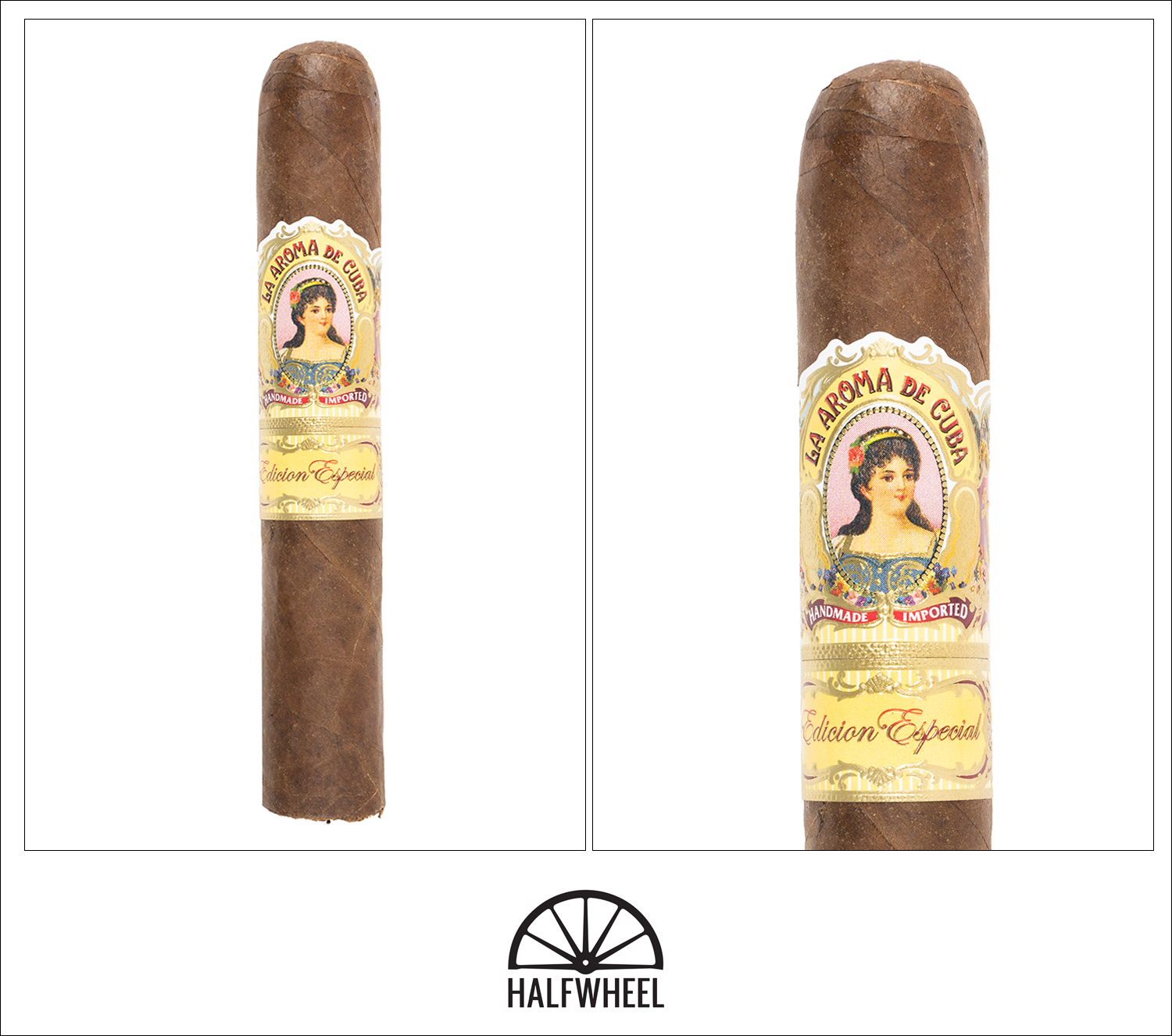 Visually, the La Aroma de Cuba Edicion Especial #2 is covered in a light pale brown wrapper that features a bit of tooth and almost no oil whatsoever that I can discern. The cigar is extremely spongy when squeezed and has a number of large bumps under the top leaf, with one sample including a large soft spot just under the triple cap. Aroma from the wrapper and foot is an intoxicating combination of notes that include strong cedar, cinnamon, apple juice, earth, cashews and milk chocolate sweetness while the cold draw brings flavors of spicy chocolate, gritty earth, leather tack, hay, almonds and a touch of floral.

The La Aroma de Cuba Edicion Especial #2 starts off not with specific flavors, but with a blast of spice and pepper on the palate and the retrohale respectively. About 10 puffs in, both seem to fall off of a cliff, leaving me with a very distinct dominant combination of both creamy cedar and rich dark chocolate interspersed with notes of freshly roasted coffee beans, salted cashews, minerals, hay, leather and earth. While diminished, the black pepper is quite noticeable retrohale for the first 10 puffs—where it combines with some rich raisin sweetness—and the spice on my tongue is receding as well. In terms of construction, the smoke production is about average off of the foot, and while the draw is excellent so far, the burn is quite wavy out of the gate. Strength-wise, the Edicion Especial #2 starts off mild and does not change much, ending up about halfway between the mild and medium marks by the time the first third comes to an end.

As the second third of the La Aroma de Cuba begins, the profile easily retains the dominant combination of creamy cedar and dark chocolate but adds a couple of interesting new secondary notes as well: a sweet floral flavor as well as a cinnamon note. Additional flavors flit in and out, including freshly roasted coffee beans, gritty earth, hay, bread and cashews. Thankfully, both the black pepper and the spice on my tongue have almost totally disappeared by the halfway point, which in turn allows the raisin sweetness on the retrohale to become a major player in the profile. Construction-wise, the burn continues to be a bit wavy and the draw continues to give me no issues at all and the overall strength increases enough to hit a point very close to the medium mark by the end of the second third. There are a number of significant changes during the final third of the La Aroma de Cuba Edicion Especial #2, starting with the dominant flavor which shifts to a sweet floral note that remains until the end of the cigar. That new flavor is followed by additional notes of creamy cedar, bitter dark chocolate, gritty earth, cashews, barnyard, leather, espresso beans and very light cinnamon. While the spice on my tongue is long gone by this point, the raisin sweetness and black pepper on the retrohale have both increased a bit compared to the second third, which bumps up the overall complexity of the profile. The draw remains excellent, but the burn finally goes off the rail a bit, forcing me to touch it up a couple of times in quick succession. Finally, the overall strength easily passes the medium mark early on in the final third but remains there until I put the nub down with about an inch remaining. I can remember smoking the 2008 version of the La Aroma de Cuba Edicion Especial blend a few times back in the day and enjoying it, so I was not a bit surprised when I found the same for the newest version of the cigar. The blend is nicely complex throughout its one hour and 25 minute smoking time, with creamy cedar and dark chocolate in the first two thirds giving way to a distinct floral note in the final third, not to mention the ever-present raisin sweetness on the retrohale. The fact that one of the samples I smoked was obviously inferior the other two brought down the overall score, but at its best, the latest La Aroma de Cuba Edicion Especial is easily worth picking up to try for yourself.