In a number of my other lighter reviews, I often try and divide lighters into categories: soft flame vs. torch, tabletop vs. pocket, single vs. double vs. triple flame, and so on. Yet as I was looking at this JetLine Super Torch Single Flame Torch, another dividing line came to my head: in the case vs. out of the case.

By case, I mean the glass display cases that are usually found near the cash registers where the higher-dollar items are generally kept both for display purposes and to keep them from being swiped by less than honest hands. But there also comes a certain perception about the lighters that get put in the case and those which are displayed either on the counter or behind the register — the higher-end and better-quality stuff goes in the case, while the cheaper products are left out. 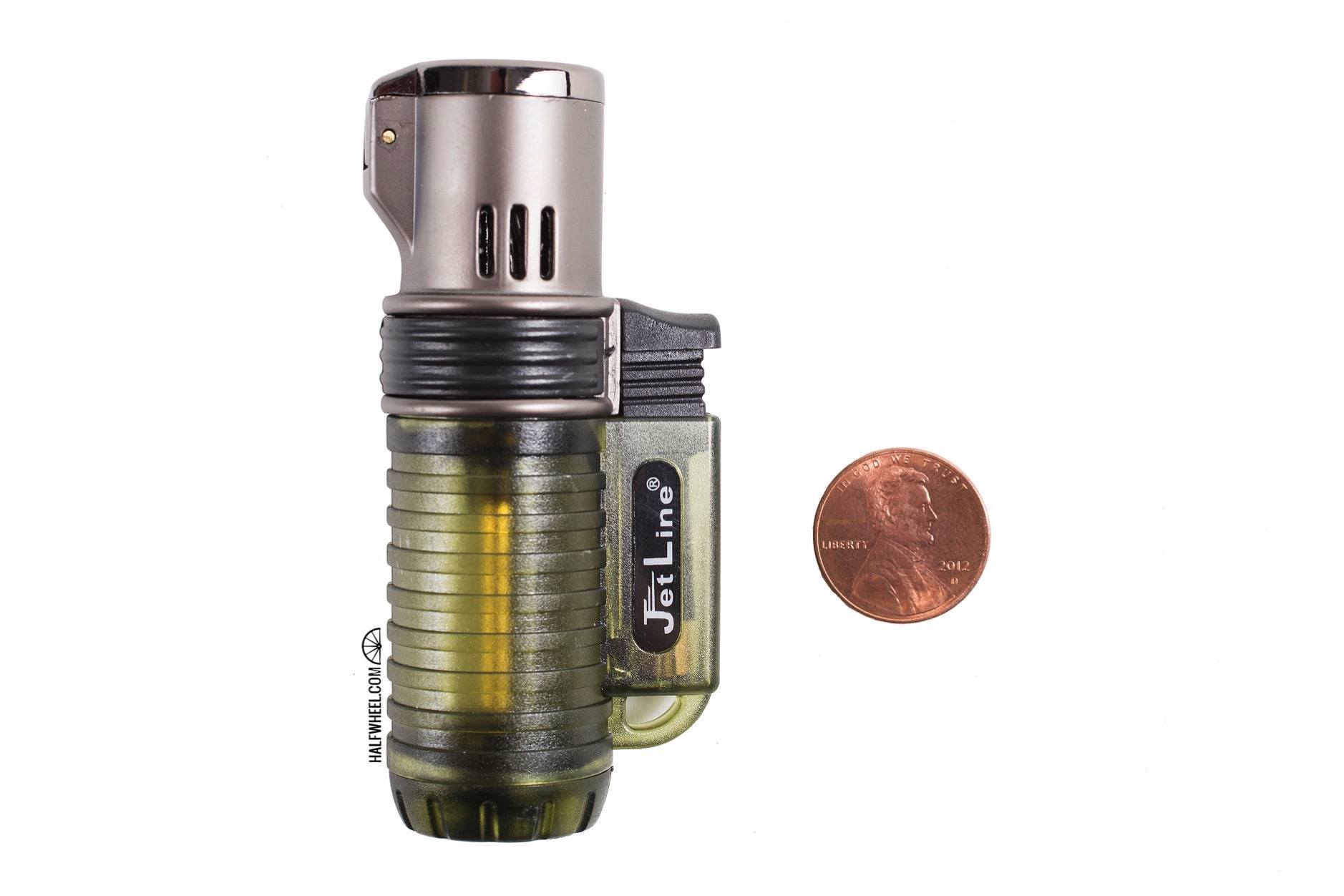 But that doesn’t appear to be the case with the majority of lighters from JetLine, which in my experience have generally been displayed on counters or shelves outside of glass cases, including the JetLine Super Torch Single Flame Torch, which is a fairly basic lighter and has a very wallet-friendly MSRP of just $9.99 and comes in four color options: clear (though with a tint of slightly aged cellophane), black, green and amber, and each color is translucent so that you can see just how much fuel you have left. In addition to the standard presentation, there is also a version you can get for the same price that comes with a gift box and manual as opposed to buying it from the bulk display.

There are also double- and triple-flame versions, including one that Charlie Minato reviewed in February 2014, but this review is only about the single-flame version. The two most notable changes in this current iteration of models are in the latching lid and the ignition. First, the lid has varied from generation to generation, as I have older models of this lighter where you had to manually flip open the lid before pressing the ignition. In this newest incarnation, the lid is latched in place by an internal mechanism that is part of the ignition, making it a one-step to get the lighter fired up. While I wouldn’t go so far as to use the term drastic improvement, it is an improvement all the same as there is one less action required to get the JetLine Super Torch Single Flame Torch going.

While it hasn’t been a problem for me with other models, this new latch also keeps the lid from accidentally coming open in your pocket, which helps to keep debris out of the jets, a somewhat minor thing but an appreciated aspect all the same.

This new lid leads to the second change in the JetLine Super Torch Single Flame Torch, the ignition process, and in particular the feel of the ignition process. With any lighter, there is going to be a bit of push back from the ignition as you press down on it, and JetLine seems to have tweaked it a bit to the firm side on this current batch. It’s by no means challenging, but when compared to the previous version as I have been doing, it is certainly noticeable and I’m not entirely sure it was a step in the right direction. 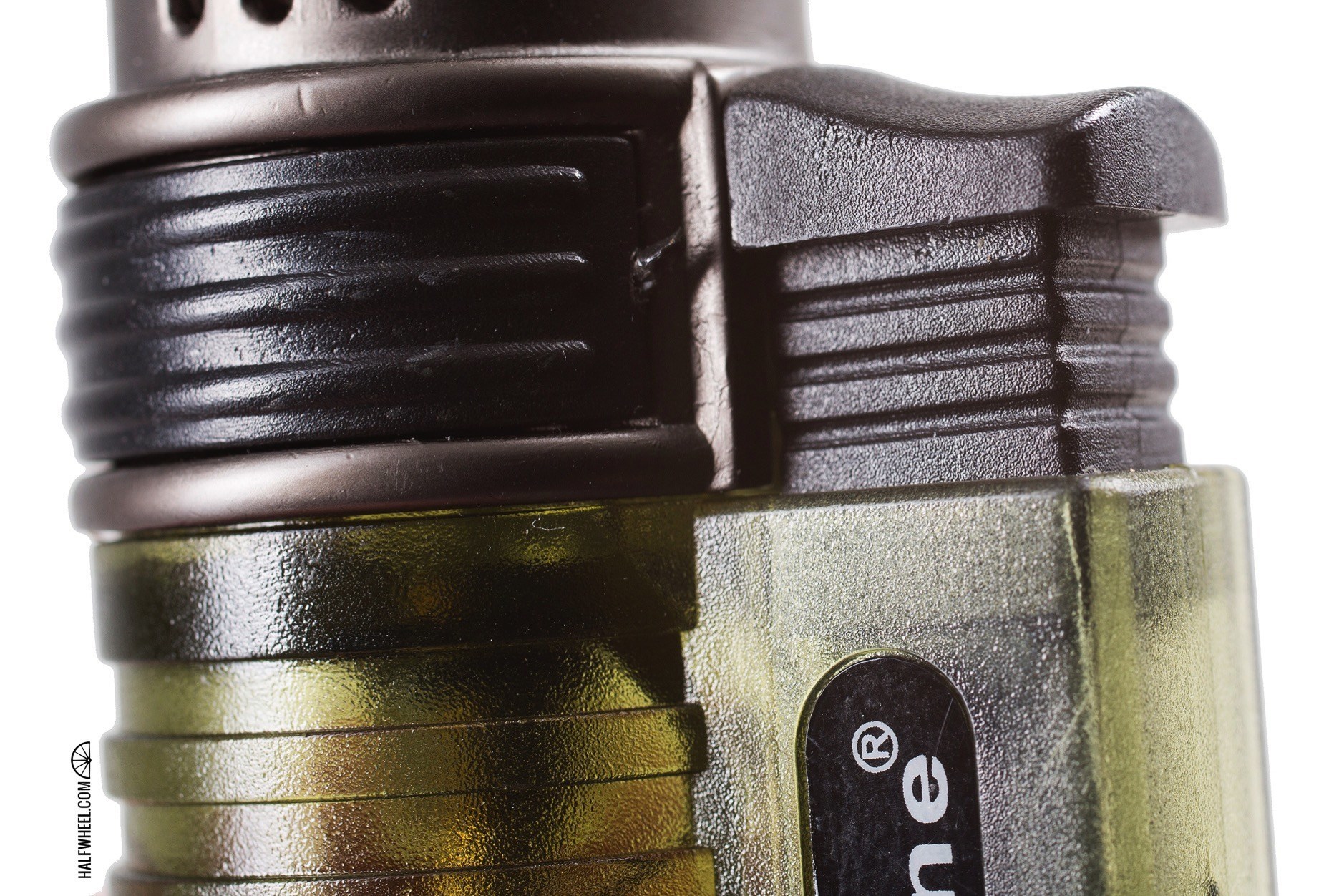 While this is a highly subjective aspect of this or any lighter, the previous ignition was just a bit easier and the actual spark produced a bit more satisfying physical feedback. The new version is a bit more clicky, while the older model lacks that plastic aspect to it despite appearing to be the same material and design. The previous model is by no means loose or anything along those lines; rather it’s just not as tight, and the change simply didn’t seem necessary. In daily use, the JetLine Super Torch Single Flame Torch is about everything I could want from it: a reliable and durable torch lighter that has no problem firing up and offers a sizable fuel tank that lasts for numerous cigars.

As mentioned above about the lid, the ignition process is now a one-step operation, particularly if you do it just a bit slower than you might be otherwise inclined. Depressing the sizable black ignition button on the side of the lighter releases the lid, starts the butane flowing and provides a spark that seemingly has yet to fail. The lighter gets going with impressive consistency, putting out an even flame that wants to get to work on your cigar. There’s no flickering or wavering as the fuel appears to be flowing smoothly, with the flow and burning of the fuel producing a very quiet roar that is audible but far from intrusive. As is the procedure with pretty much every cigar lighter on the market, as long as you keep the ignition button pressed down, the JetLine will keep the fuel flowing and a clean and sold flame burning.

It should be no surprise that the metal upper half of the JetLine does get fairly hot after toasting up a cigar or two, and it reaches a point where I’m not comfortable putting it right back in my pocket or travel humidor, choosing to let it cool off for a minute or so before getting it near anything it could burn or otherwise damage. There is also a third change that adds a bit of convenience to the use of the lighter, as the adjustment wheel on the base now features a flip-out portion that allows you to adjust the flame with just your finger, meaning you no longer need a screwdriver or other flat instrument to fine tune the flame height. Personally, I’m not one to really fiddle with the flame height, preferring to find a setting that works for me and then leave it alone. Additionally, since I tend to use cigar scissors on a regular basis that have a small screwdriver built in, this wasn’t really an issue. However I certainly appreciate this added convenience as the process has gotten that much easier, even if it’s not one I tend to use.

The setting that seemed to work best for me was about a quarter turn down from the maximum; that highest setting had butane still flowing after I let go of the ignition and provided a flame that was unnecessary for most cigars. There is really no need to produce a tall flame with this lighter, as the lid flips well out of the way and doesn’t impede the lighting process whatsoever. 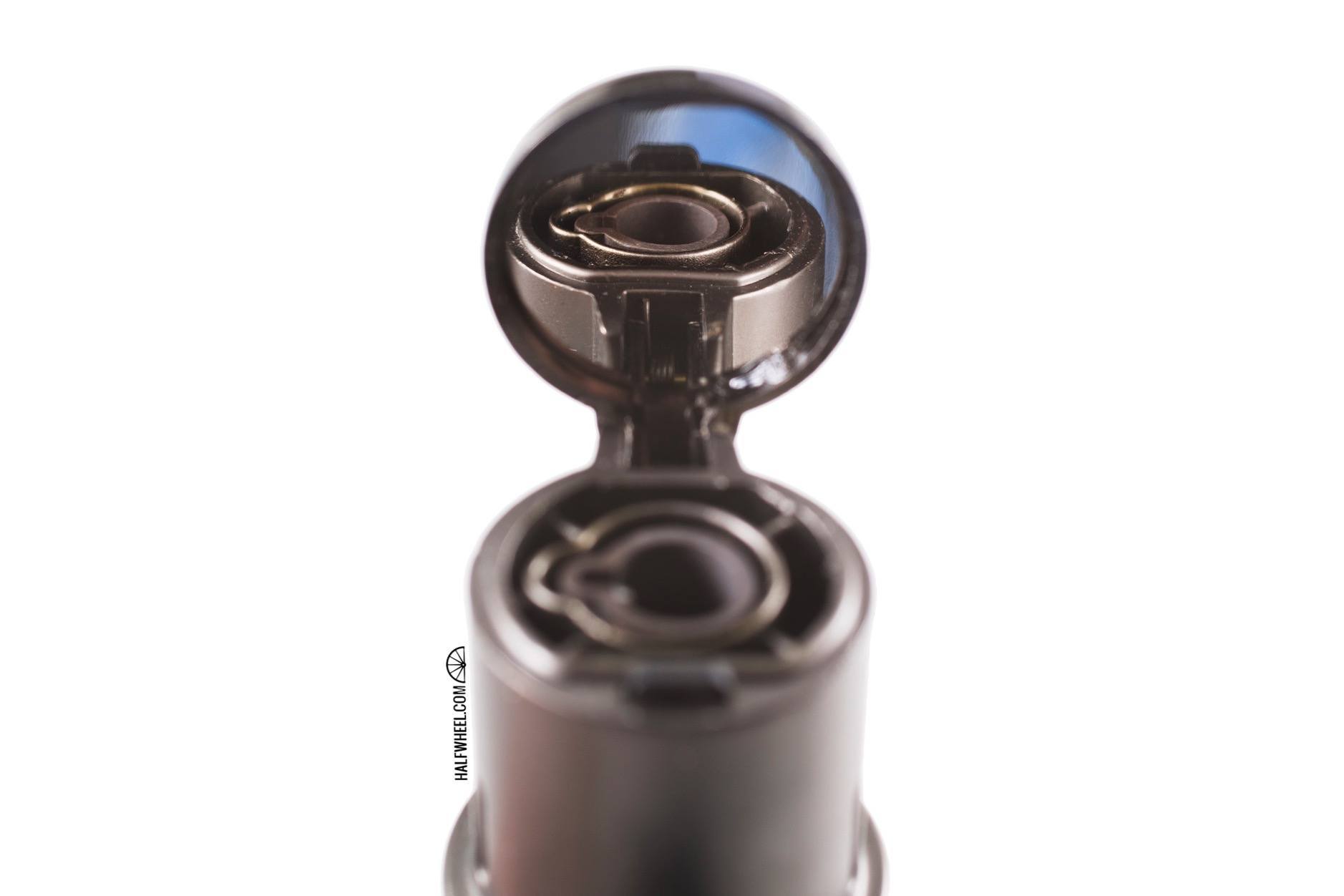 Speaking of the lid, JetLine has added a mirror to the underside, something that has shown up on lighters from several manufacturers and is something I simply don’t find use for. While one could make the case that having the mirror allows you to see the foot of the cigar as you light it, I simply don’t light my cigars that way, choosing to look at the foot directly when toasting or relighting. Additionally, it’s simply too small for me to find it useful, and while it might get marketed as a feature, it’s one on which I just don’t place much value.

While it is certainly not an ornate lighter and falls to the basic side of presentation, it also has its own distinctive look and one that I have no shame in pulling out of my pocket in every situation. The plastic lower half of the lighter lets you see exactly how much butane you have left; there’s no fuel window to peak through or guessing how full the tank is—you see it all with this JetLine. Some might not find that appealing, but the it’s hard to overlook the convenience factor and you’ll have no excuse for running out of fuel because you didn’t know how much was left. Unless your smoking circle is one that prides itself on inducing lighter envy, the JetLine is at home pretty much everywhere. 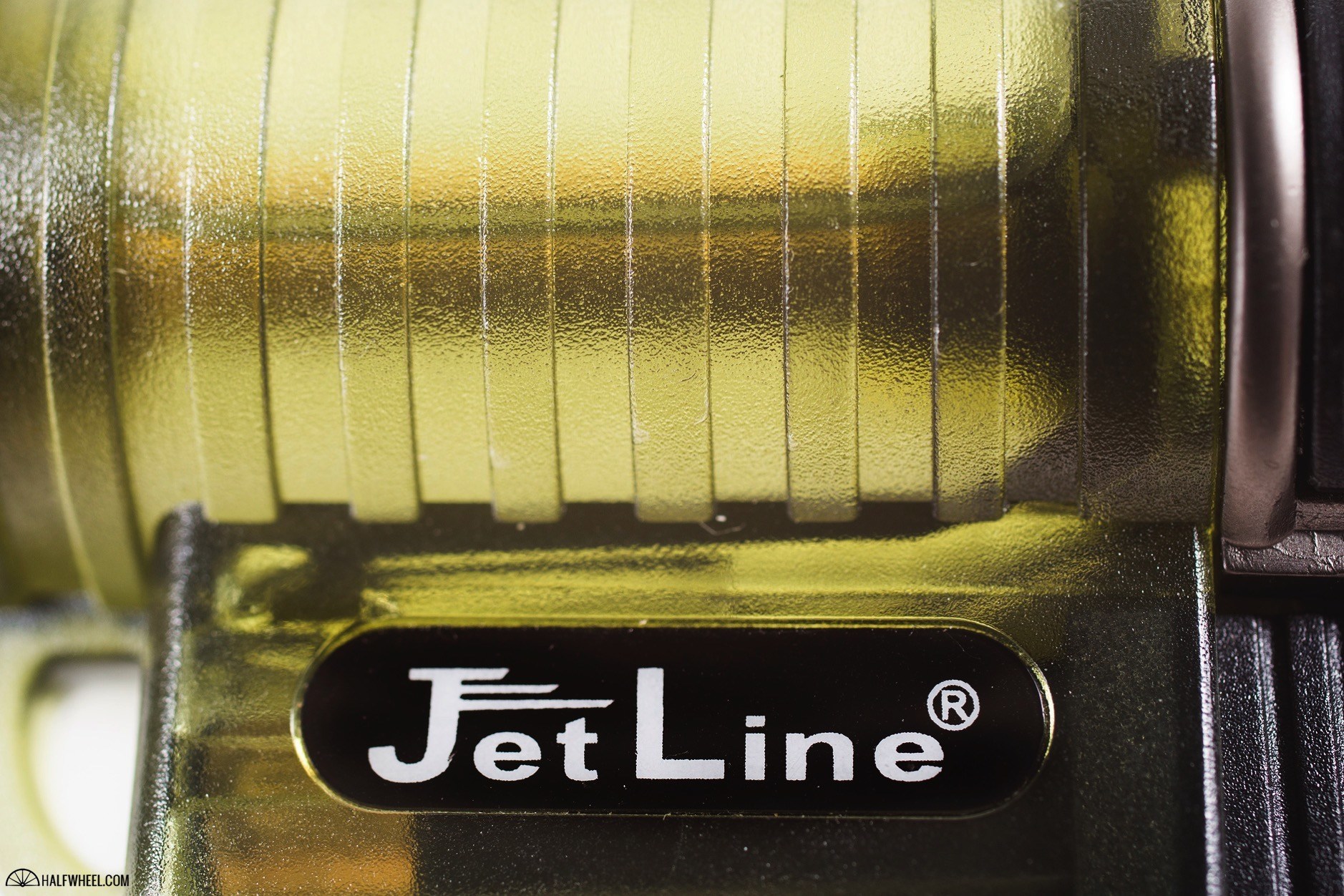 I know a lot of folks who use and swear by this style of JetLine torch, including some of the halfwheel staff, and after a couple of months with it I now understand why. For just $10—or a few bucks more if you want the double- or triple-flame version—you get an incredibly reliable and utilitarian torch that seems to also hold its own in the durability department. It may not be the shiniest or fanciest model out there, but it’s hard to argue that it performs any worse than its more expensive, in-the-case counterparts, and in some cases I would say it performs better than those more expensive models. Personally, I look forward to always having one of these nearby or as a gift for a new cigar smoker or someone looking for a solid torch.