Tatuaje and My Father Cigars had a much more cohesive and unified feel this year as they shared a gorgeous new booth with equal billing on the marquees and basically equal square footage. Tatuaje did use part of its space to house L’Atelier, but the vibe was certainly all Pete Johnson. 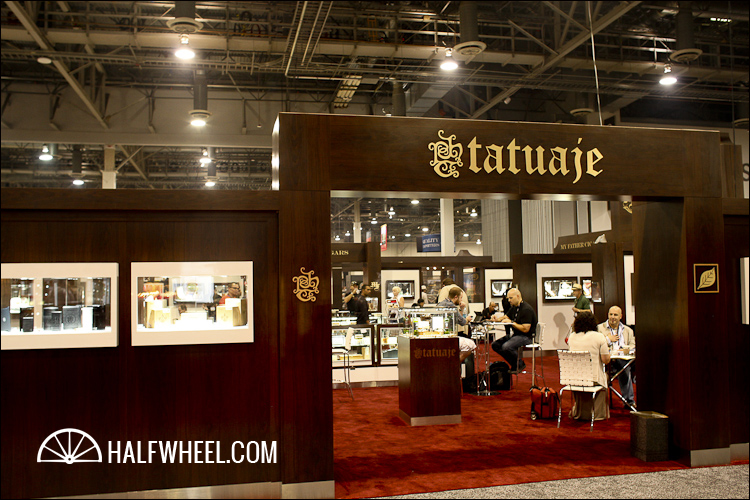 The Tatuaje space had a lot going on in terms of new product, and most of the displays were kept in the windows you see above, save for the 10th Anniversary cigars you see in the display case in the middle of the floor, which also happened to house a couple empty bottles of Pete Johnson’s wines. In addition to the new, limited projects, there were a number of ongoing projects that got updates and additions, so where to start? 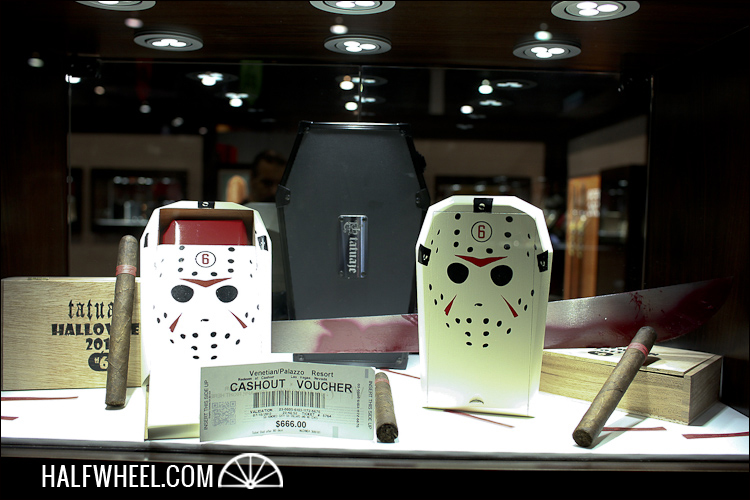 Yes, that is a $666.00 cashout voucher that belongs to Pete Johnson in the case. But behind that, the sixth cigar in the Tatuaje Monster Series, the JV13. The cigars have been made and are currently resting at the My Father Cigars factory in Nicaragua. It’s a Connecticut Broadleaf wrapper, Nicaraguan double binder and an undisclosed filler that results in what Johnson calls a “punchy blend.” As for production, it’s the same as in years past, with about 700 dress boxes being made and just over 600 headed to retailers. Johnson keeps numbers 1-13, 31 and 666, and everything over 666 gets labeled XX and is used for special events at Johnson’s discretion. There should be about 4,500 of the 10-count boxes made. As in years past, there’s an accompanying lighter and cutter made by S.T. DuPont. 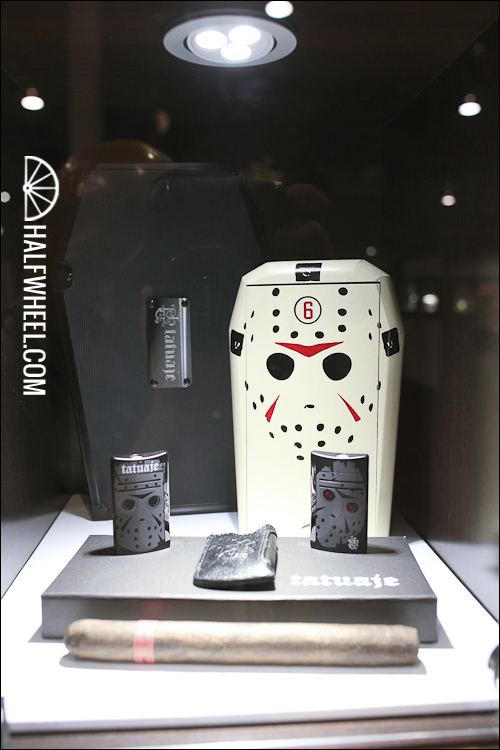 As for Fat Little Monsters, look for them next year. Nothing confirmed to report on other than that the project is in the works.

The Avion 13 was also on display in its new form, after Johnson decided to change the wrapper, a story which you can read about here. Johnson noted that the actual number of Limiteds with the original Habano wrapper is closer to 9,700 cigars, as more were found in the factory after the original announcement. It’s a 6 7/8 x 52 Perfecto with a Connecticut Broadleaf wrapper. 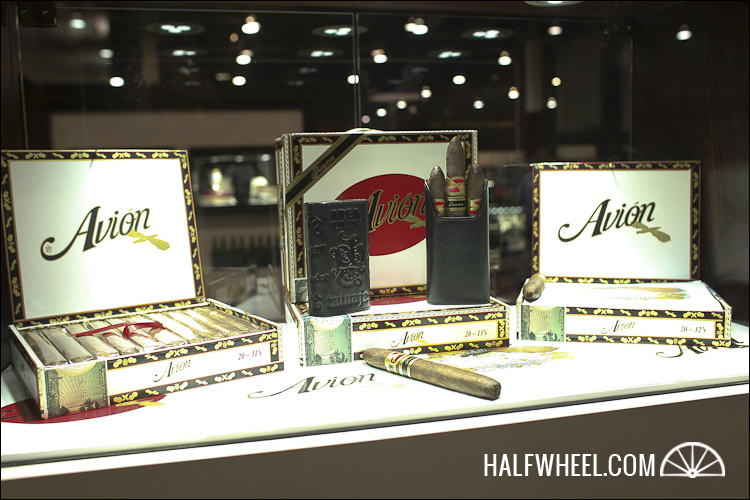 The Tatuaje Black Label line is getting a second Corona Gorda, though with a new band because Johnson doesn’t want people passing off the new cigars for the old ones and vice versa, so this installment has a bit of silver and white trim on it. Otherwise it is the same blend, though Johnson noted that the selection of wrapper is much better now than it was when the original Black Label Corona Gorda came out.

They will be packed in 19-count jars which were on display in a prototype format. There’s been a number of design changes, so a finished version wasn’t available. The jars are made out of melamine, which is used on some of Tatuaje’s ashtrays, and will be engraved with the finished artwork. When asked about melamine versus ceramic, Johnson noted a number of issues with the latter, including price and shipping weight, and said that he may never go back to ceramic jars for future projects. Some retailers have asked to get the cigars ahead of time without the jars, and Johnson is working to accommodate that request.

The schedule is for there to be 10,000 jars made, with possibly some 500 additional bundles, all consisting of 19 cigars. Johnson hopes the jars will be at retail by Christmas but said that the end of January was the more realistic and optimistic time frame. Pricing is $10 per cigar and $190 for the jar. 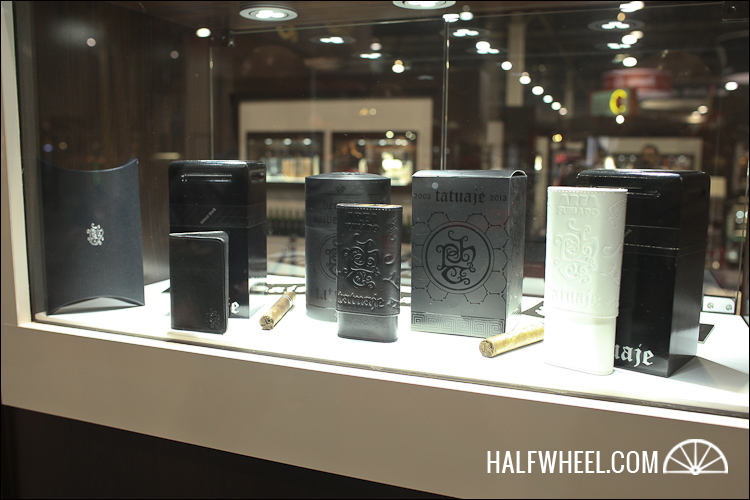 As you’ll notice in the picture, there are also some new accessories coming from Tatuaje, including a wallet, passport holder and three finger cigar holders. Again, several details are still being worked out, but keep an eye out for them later this year. What is known is that the cigar cases will be $110 each, with the black coming out fairly soon followed by the white.

Then there are the 10th Anniversary Brown Label cigars: 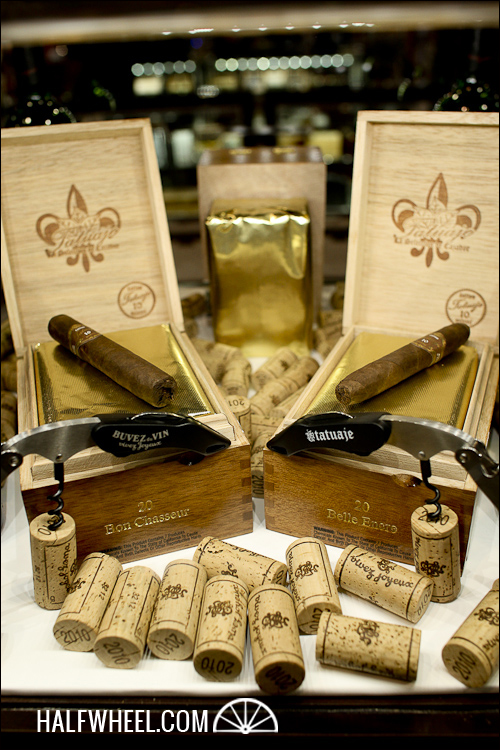 The 5 3/8 x 52 Bon Chasseur and 5 3/8 x 48 Perfecto Belle Encre are being made at My Father Cigars’ factory in Nicaragua and use the traditional brown label blend. They have been shipping to retailers and will continue to do so in the coming weeks, so expect to see them sooner than later with a price around $10.00 per cigar, and both in boxes of 20.

One exciting note from Tatuaje – a Brown Label Culebra is slated for release next year. Johnson shared the news in an exclusive to halfwheel that he is working on a Culebra that will basically be three Seleccion de Cazador Especiales in the traditional twisted format.

Other than that, expect a slow down of single-store releases from the company as they focus on their existing portfolio and projects.