The Herrera Estelí brand has been in the news a good bit this year due to the launch of several new lines and the introduction of revamped packaging. But the brand created by Willy Herrera has also made a number of smaller production releases for individual stores.

Back in 2016, the Orange, Calif. retailer Maxamar Cigars celebrated the fifth anniversary of its online storefront, SmallBatchCigars.com, with a limited edition release called the Herrera Estelí Inktome. A well-regarded cigar in its own right, it got a reblend in December 2017, with Herrera selecting a higher priming wrapper, a more pronounced box press, as well as a slightly different name, the Herrera Estelí Inktome Exception.

Both cigars trace their roots to the original Herrera Estelí blend, but with the higher priming Ecuadorian habano wrapper, the cigar is darker than what you’d expect to see from both the regular production Herrera Estelí and the original Inktome. Beneath that sits a Honduran binder and fillers from Nicaragua. It’s not a drastic difference, but when placed side by side it’s not challenging to see the difference.

The change came about as a result of Herrera’s tinkering with the blend and different amounts of pressing to see how the changes affect the palate and different nuances appear. “Now the Inktome Exception smokers will be able to see how small variations of shape can create dynamic shifts in flavor profile,” said Herrera at the time of the cigar’s announcement.

Additionally, the cigar sports the red and gold version of the band that was launched in 2014 for the Tienda Exclusiva by Willy Herrera project, single store exclusive cigars that stem from the Herrera Estelí blend. The Inktome Exception also wears a secondary band with the Inktome name on it, another trait it shares with the original release.

As for that Inktome name, it comes from the shared history of Maxamar Ultimate Cigars and Small Batch Cigar. Maxamar opened in 1998 using funds generated from the sale of Inktome stock. A total of 10,000 cigars were produced by the La Gran Fabrica Drew Estate factory with an MSRP of $7.99 per cigar. They come packed in boxes of 10 cigars, which went on sale in the final weeks of 2017.

Here’s what I said about the Herrera Estelí Inktome Exception when I reviewed it in January 2018:

While this cigar shows a bit of youthful exuberance, it is simply fantastic from start to finish. Balance is never questioned, there are as many upfront flavors as there are subtleties, and for the most part, technical performance is outstanding. While I would have liked a bit more predictable combustion in the first sample and more durable wrappers across the board, there is little I could find fault with the Herrera Estelí Inktome Exception about, and I have to think that as some of the brighter pepper notes settle just a bit, the cigar will hit its zenith and become that much more complex and enjoyable. This is a remarkable cigar at nearly any price, but recognizing that it can be had for just under $8 makes it all the more appealing. Highly, highly recommended. 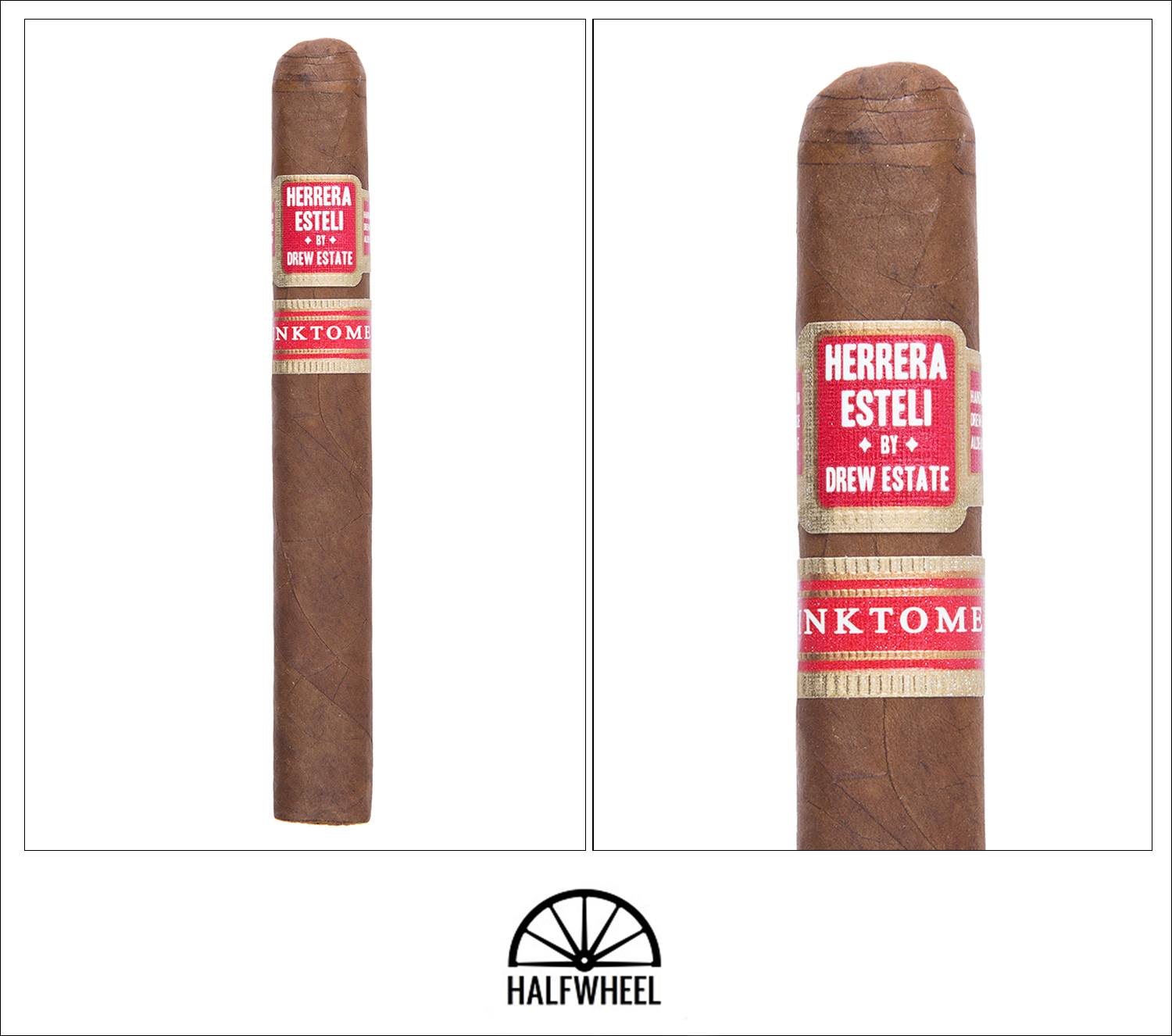 If there is one thing about the Herrera Estelí Inktome Exception that I remember about it other than its flavor, it was its shape. An extreme press that leaves the cigar with an oval shape, almost as it had been perfectly squashed by something but without any sort of damage to the cigar itself. Like many pressed cigars, it shows a bit of firm, pillowy give, particularly top to bottom while the side to side give is much less pronounced. It’s an attractive leaf that is tanned and reminiscent of a stirred up latte in terms of the shade of brown, while seams are essentially invisible and veins are fairly small and scattered. The foot is mild with a bit of corn flakes sweetness, backed by just a bit of sweet cream. The cold daw is a bit on the open side and the mouthfeel is odd given the extreme press, but neither is overly worrisome. The cold draw is a bit more bread-forward than showing the cereal grains that the foot offered, with a bit more of the creamy sweetness around the edges and only a slight bit of tingle for the tongue and lips.

For not even suggesting pepper on either the pre-light aroma or cold draw, the Herrera Estelí Inktome Exception delivers plenty of white pepper on the first draws, snapping the tongue to attention with a bright, tingling sensation. Surprisingly, there doesn’t seem to be as much delivered via a retrohale, which is more wood-forward and heartier at the onset of the cigar. That changes once the first clump of ash falls off, as white pepper really takes off in the nose and becomes almost singular in its impression. Meanwhile, the tongue seems to get a slightly softer though still engaging profile, as the cereal note from the aroma has returned to deliver a Frosted Flakes flavor that gets backed up by pepper and wood, three flavors that mesh together quite well and provide good balance and complexity as the burn line approaches the midway point. The draw has dialed itself in nicely, and while the smoke doesn’t want to stick around after a puff, it’s not due to a shortage of it. Halfway through, the flavor is medium-full, body is medium-plus, and strength is somewhere between medium and medium-plus.

I find myself retrohaling almost exclusively as the Herrera Estelí Inktome Exception moves into its second half, as the pepper is really enjoyable and full without being challenging—at least for my senses—to handle. It’s not too long before the pepper and wood come together to form the campfire aroma that I recall from my notes about the cigar when I first smoked it, and the cigar continues to steadily evolve from where it started. A thick creaminess continues to come and go from the profile, and the Inktome Exception is definitely better when it is part of the mix. Woods carry the cigar into the final third, giving the profile an increasingly dry texture, with the front of the tongue getting a fair amount of stimulation as a result. The aroma seems to be the most telling aspect of the cigar, particularly as it rests and shows a bit of orange peel, much like you might smell at a cocktail bar as a Manhattan is being made. With the cigar in its final inch, the heat adds some sharpness to the wood and white pepper, which intensifies the effect on the palate, and not for the better. Thankfully it has been an enjoyable 90-minute smoking experience to this point, with the body, flavor and strength all in the medium to medium-full range at times, with plenty of balance and complexity and no technical issues of note.

Right after I finished my original review of the Herrera Estelí Inktome Exception, I went over to SmallBatchCigars.com and picked up a box for my humidor, and revisiting this cigar after a year makes me glad I did that. The cigar was and still is bright and vibrant with plenty of wood and white pepper carrying the bulk of the load, but also dipping into some rich sweetness and creaminess at times, hitting a high point where the campfire note hits the aroma and sells the cigar to the senses. A truly solid smoke that shows greatness can be delivered at a very reasonable price. It was highly recommended then and remains so a year later.