In 2017, Abdel Fernández released the first of what is now many cigars for Altadis U.S.A. That cigar—the H. Upmann Nicaragua by AJ Fernandez—marked a major accomplishment in his career, as it was the first time he had worked with Altadis U.S.A., one of the biggest names in the cigar industry.

He had worked with others before, most notably Cigars International, which is owned by Altadis U.S.A. rival Scandinavian Tobacco Group (STG). He had also worked with STG’s General Cigar Co. portfolio, meaning that he was now making cigars for two of the four largest companies in the industry, and two companies that are direct rivals.

I was at the factory when Fernández showed off a finished box of H. Upmann Nicaragua for the first time to Altadis U.S.A. employees and I don’t think anyone could have guessed what would have happened with the line. It went onto become a bonafide hit, the first and probably the most successful cigar he’s created for Altadis U.S.A. to date.

As such, when the company announced last year that it would be making a follow-up release in the form of a limited edition 6 x 60, it was no surprise, though I was somewhat surprised by how small of a run it was.

As the name implies, it uses tobacco from the 2009 crop at Fernández’s Finca La Lilia farm in Nicaragua. The blend is mostly the same as the regular line: an Ecuadorian Sumatra wrapper over a Nicaraguan corojo 99 binder and Dominican piloto cubano and Nicaracaguan criollo 98 fillers.

One disclosed change is that the wrapper is a higher priming than the regular version, giving it a darker color and reportedly added strength. 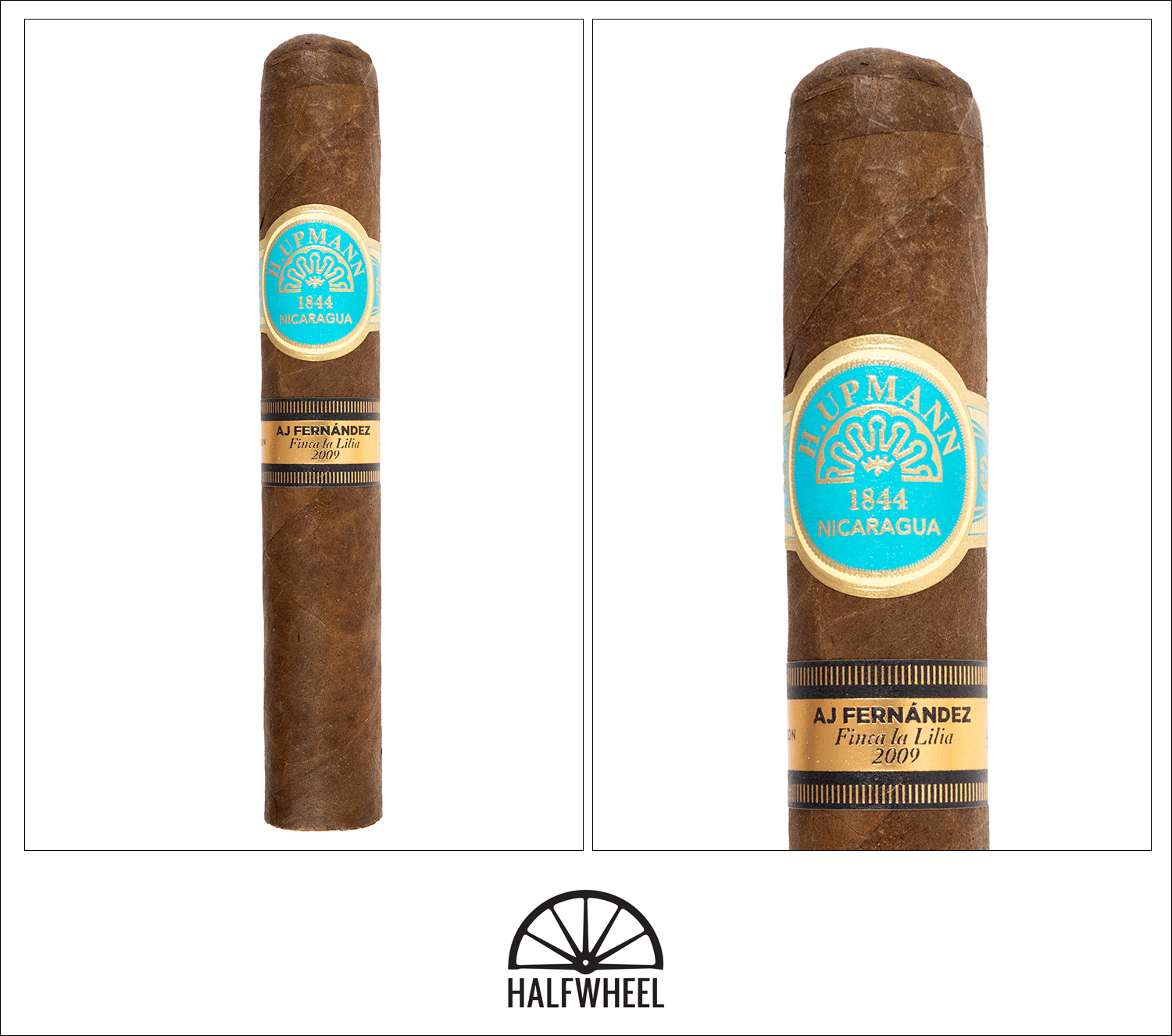 I really like how the teal in the main band pops in contrast with the wrapper. That being said, I find the two different hues of gold between the main and secondary bands to be a bit odd. The wrapper color is very uniform in color, and while it is completely devoid of oils it is still soft to the touch. Aroma from the wrapper has leather, peanuts, a bit of chili and some barnyard; right around medium-plus. The foot is full with varnish, red pepper, cocoa and some grapefruit. Cold draws have cocoa, a dry peanut butter, some vanilla, white pepper and graham cracker. While not as sweet as the dessert that the description sounds like, the cold draw is definitely a bit sweet.

The H. Upmann Nicaragua by AJ Fernandez Finca La Lilia 2009 starts with a very dry oak, oatmeal and a restrained sweetness. It’s medium-full and the profile reminds me of the smells of a cigar shop. Unfortunately, the first third stays super dry with walnuts, cedar and white pepper upfront. Retrohales have a mixture of floral, a less dry walnut, maple syrup and some Fernet. The finish is a combination of sugar cookies and walnuts, with a chlorine-type smell and white pepper present depending on how hot the cigar gets. Flavor is full, body is medium-full and strength is medium-plus. Construction is great, though the burn is rather slow. Things still remain dry in the second third of the H. Upmann Nicaragua, but it’s more of a toasty sensation now. There’s a dry bread flavor, burnt toast and a contrasting smooth pistachio ice cream flavor. Retrohales produce even more of the toasty smoke, though there’s some cinnamon and a sweet generic fruit flavor. Two cigars have a flavor that reminds me of a greasy egg roll shell. Flavor is full, while body and strength are both now medium-full. Given the size of the cigar and how slow it’s burning—I near two hours before I get to the final third—I’m starting to feel the overall effects of the nicotine even if each puff isn’t particularly punishing. The final third of the H. Upmann is much crisper than the earlier thirds. The flavor is similar to the second third—still toasty—but now there’s some Pringles-like potato chip flavors, hay and a lot of minerals. Retroahles have pineapple, barbecue flavors, dry leaves and black pepper. There’s suddenly a lot of black pepper on the finish, joined by dried fruits, a generic nuttiness, and at times, that Pringles-like flavor. While I still think the profile is dry, this is far and away the best it’s been throughout the cigar. Construction remains excellent until the end with copious smoke production and thick chunks of ash. A lot of times with 60 ring gauge cigars I find that I like the flavor, sometimes more than smaller ring gauges, but don’t care for the size. In this case, while the flavors were still good, I’m not sure that this is any better than the regular H Upmann by AJ Fernandez. I should remind you: this isn’t the same blend, so it’s not an apples to apples comparison. But in this case, I think the size works against the cigar in two different ways. First, there’s the large size, which I find annoying. Second, the profile is rather dry. This gets compounded by the fact that this cigar took so long for me to smoke. It didn't affect the score, but I'd be lying if I said I wouldn't have been wanting to taste this profile in something shorter.