While the Dunhill name dates back to 1907 and Alfred Dunhill’s opening of a tobacco shop in London, it wasn’t until much later in the 20th century before the company’s name first appeared on a cigar all by itself. Up until that point, there were cigars under the Dunhill Selección Suprema name, but those were made by various factories for Dunhill.

In 1989, the name first appeared on a Dominican cigar made by British American Tobacco, which still has rights to Dunhill today.

Despite decades of cigars produced for Dunhill, there is fairly common style of cigar which its name has never graced: a maduro.

The Dunhill Aged Range got a refreshed look once General Cigar Co. was chosen to handle the company’s distribution in the U.S., getting a new blue band and updated logo with a modernized take on the old script logo. The line also added the Dunhill Aged Reserva Especial 2003, which was blended around Dominican filler tobaccos from 2003.

This year, the brand rectified the lack of a maduro by unveiling the Dunhill Aged Maduro at this year’s trade show. While Dunhill might be known for elegance in its profiles, the blend of a sun grown ligero maduro wrapper from an undisclosed country, Nicaraguan binder and filler from Nicaragua and the Dominican Republic certainly suggest that this could be a profile that is a bit of a departure from what the line is known. 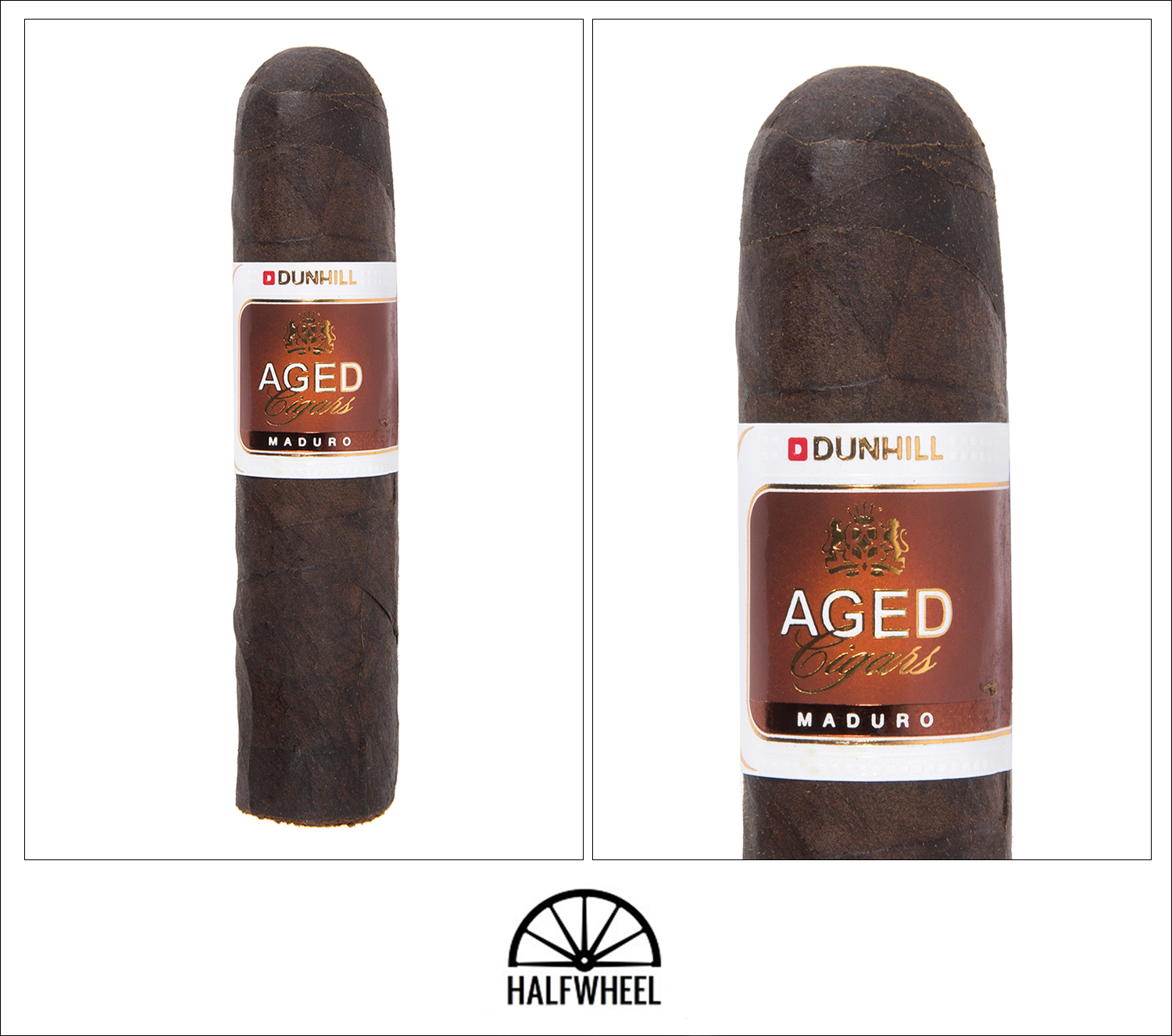 The Dunhill Aged Maduro uses an incredibly dark ligero wrapper, and its color is almost striking, particularly as it plays of the white and copper of the band. There is a bit of oil on the wrapper, and while not plentiful, the veins can be prominent. It’s a firm, well-rolled cigar with a bit of a point on the cap that makes it hard for me to decide whether it was intentional or simply an oversight. The prelight aroma off the foot has a note that reminds me of wine, but more in how I describe wine; there’s a bit of dark berry jam and some pencil wood, but both are fairly subtle and subdued. It’s a dry profile that tingles the nose a bit, but not due to having much pepper. The cold draw is generally fine—a touch tight if anything—and has a very subtle hint of sweetness, with touches of oak, pencil wood and little if any pepper.

The first puffs of the Dunhill Aged Maduro Short Robusto are well-balanced and peppery, engaging enough to command my attention but subtle enough to be the first cigar of the morning. Flavor doesn’t quite jump off the cigar, but it’s not a knock to call it a relatively subdued profile. There’s a bit of meatiness that begins to develop in the profile as the smoke thickens and gets more filling in the mouth, while retrohales pick up a bit of a smokey character on top of the subtle pepper. The burn through the first third is absolutely fantastic with a tight ash and crisp burn line. 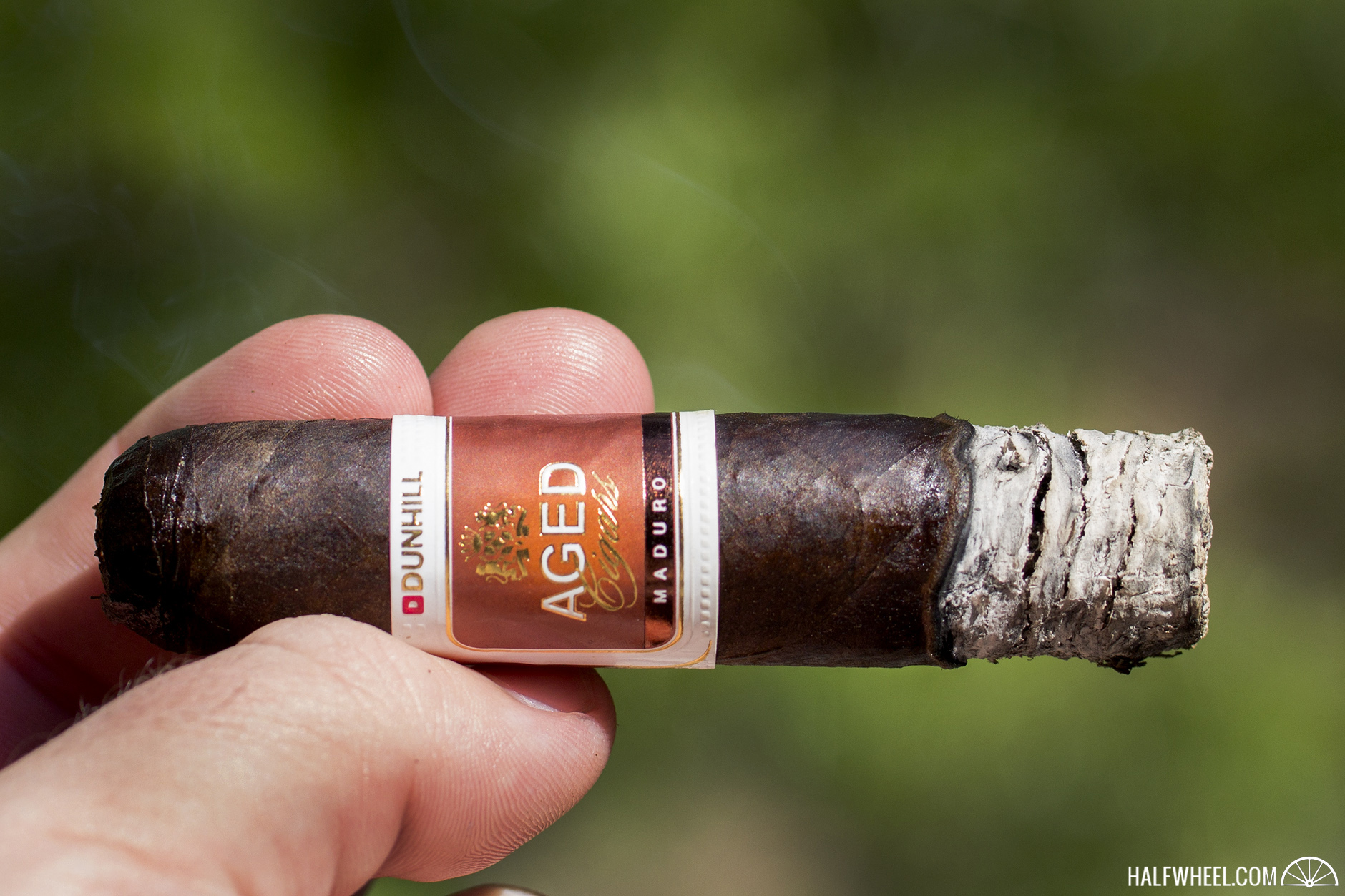 With the compact size of this Short Robusto, the thirds tend to blend into each other, and the ash is certainly no help, as it holds on until almost the exact midpoint of the cigar. As it transitions into and through the first puffs of the second third, the body of the smoke continues to develop and fill out, picking up a bit of weight and robustness without ever getting harsh. Thick espresso wafts off the aroma, while the flavor doesn’t have the acidity but instead offers earth, mocha and just a touch more pepper for the lips and front of the tongue, a transitional note that takes the cigar into its final inches. An occasional note of smoky campfire comes through in this section as well, though not enough for my liking. 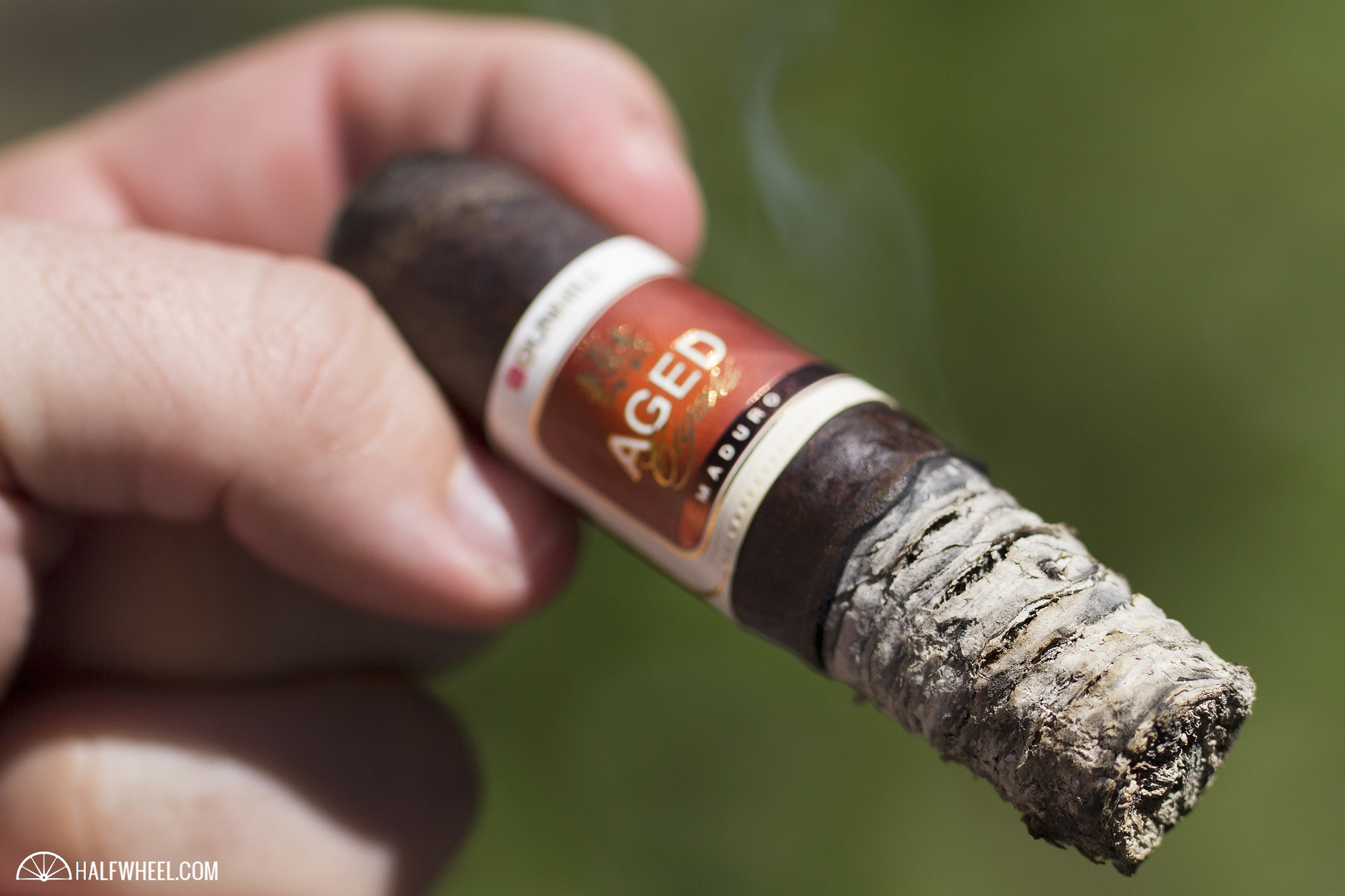 That transitional note ends up becoming the focal point of the final third of the Dunhill Aged Maduro Short Robusto, pushing the previous profile completely off stage and wrestling the taste buds immediately into a much more vibrant profile. Pepper isn’t abundant but what is there is quite noticeable, sharp on the tongue and generating a tack-sharp sensation. The cigar can get a bit hot and unfortunately rough on the palate in the final inch and a half, all of this as part of the first real change that I felt compelled to write down. I can’t quite tell if the pepper is picking up as well, but there is much more of a tingle on the tongue as the cigar approaches its conclusion, a parting increase in the physical sensation that the cigar has produced in the hour or so it has taken to get to this point. 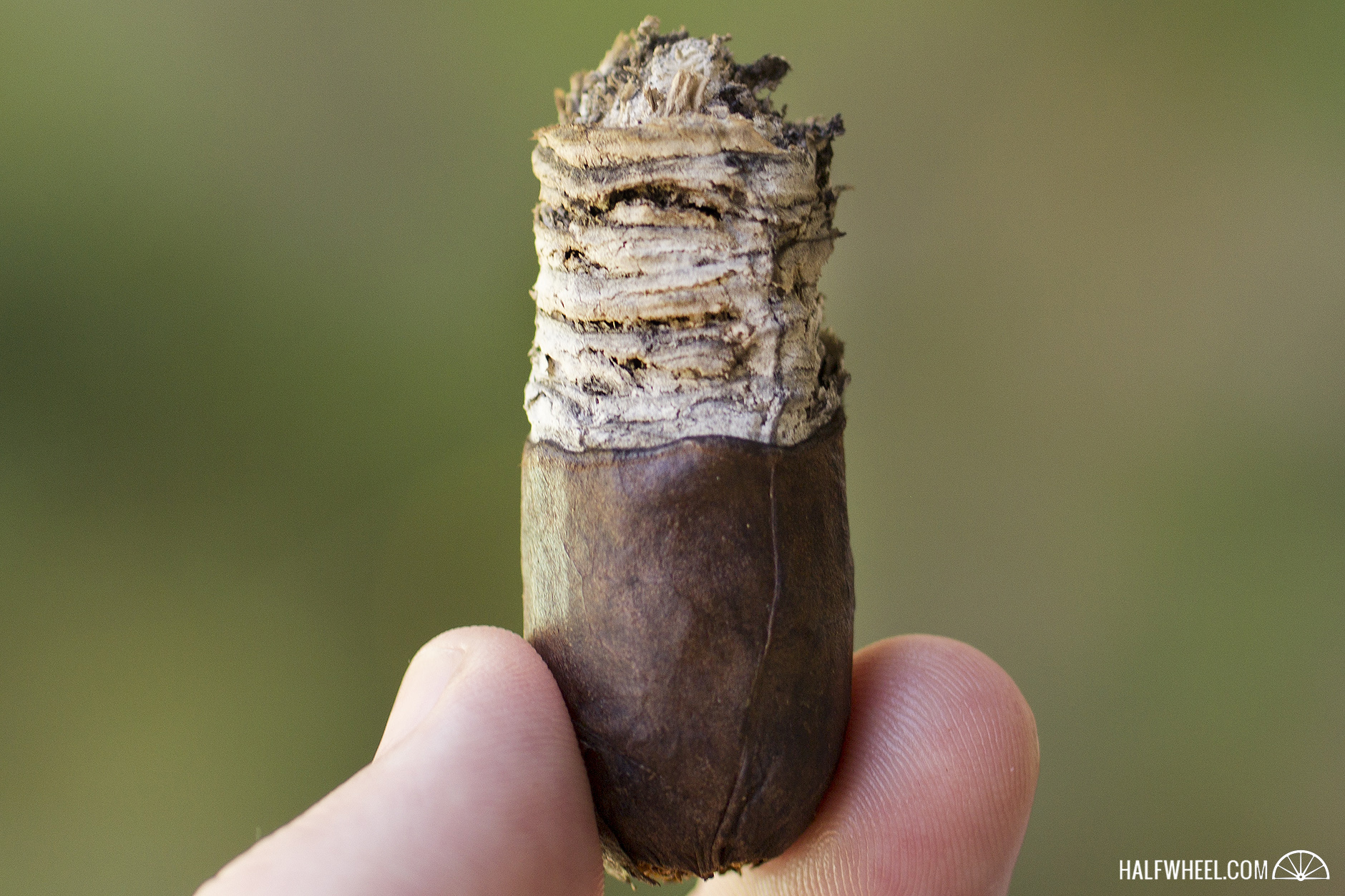 There are two things that stand out about the Dunhill Aged Maduro Short Robusto: the consistency and the ash. The former was remarkable from cigar to cigar, as each sample provided exactly the same experience from start to finish. The ash was worthy of trying an ash stand with, something I haven't come across on many cigars of late. While the flavors are certainly good, they are a bit shallow for my palate through most of the cigar, with the final third letting them loose with a bit of sharp pepper contributing a bit too much to the equation. All told though, this is a solid first maduro for the Dunhill name, and one that is worthy of trying at least once in whichever vitola you prefer.