There aren’t many things that surprise cigar consumers about how cheap they are, but humidors are probably the first exception to that thought that comes to mind. Thanks to companies like Quality Importers and Prestige Import Group—and the Chinese factories who make their products—you can find a 100-count cigar humidor for around $100 or less online and oftentimes in retail stores. 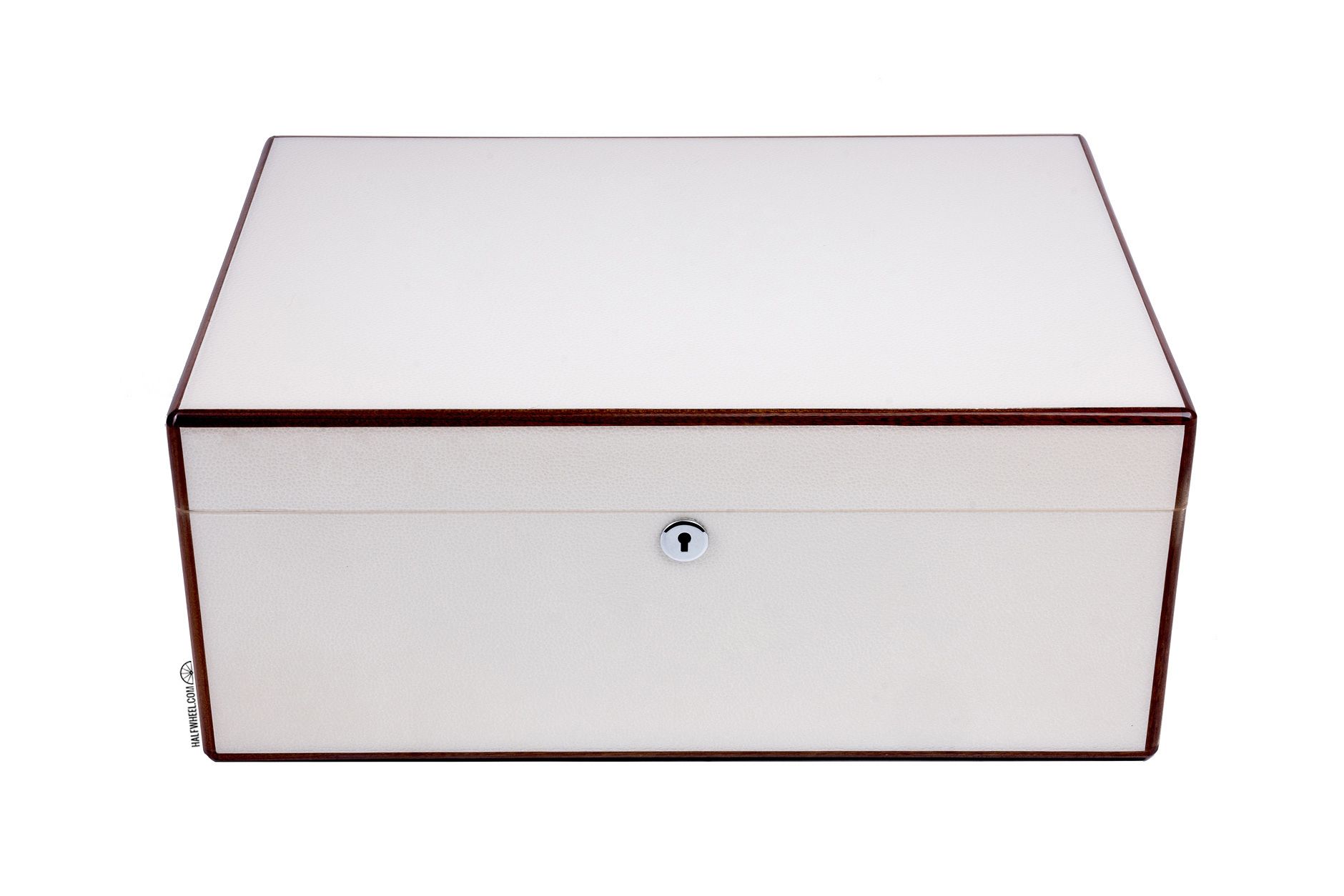 Unfortunately, you get what you pay for and in many cases that can be frustration. While I’ve had pretty good luck with a Quality Importers Il Duomo I bought a half dozen years ago, there are plenty of horror stories. The space between the Chinese-made humidors and four-figure Elie Bleu and Davidoff humidors is the real sweet spot for me in terms of quality and price, but there aren’t a ton of brands, particularly ones whose products are actually sold at cigar retailers.

The three most popular brands in this category are Savoy, which is owned by Ashton; Diamond Crown, which is owned by J.C. Newman Cigar Co.; and Daniel Marshall. In addition, Davidoff makes some Zino-branded items and there a host of European companies, though most of them don’t make it to the United States.

A year ago, Brooks asked if we had a desktop humidor he could use to store cigars. We didn’t have an extra one, so I opted to buy the Diamond Crown St. James Peabody 160-Count, a massive humidor. Over the last year, I’ve been using it as a spare humidor—which means Brooks still hasn’t gotten an extra humidor—though I promised him upon publishing this review, he would finally take ownership of the St. James, though that won’t happen the day this review is published.

The humidor is offered in 40- and 90-count models as well, but this one is the big one: 160-count. It measures 16 1/4 x 11 4/5 x 6 3/4 inches. There are handles on each side that produce an additional 3/8 of an inch each, meaning the humidor takes up 17 inches in width. It’s off-white with what Diamond Crown describes as a pebbled texture underneath the lacquer, there’s also a light red wood that cements the corners. The fixtures are a silver color with most parts finished in a mirror-like finish.

One thing that’s quite noticeable is that the Peabody has no tray system, something that is a bit odd for a humidor of this size. The lid is magnetic, made to hold the included Diamond Crown humidification system and electronic hygrometer. There are two included dividers, which can be arranged however you wish.

On the bottom is a non-removable slotted floor, a feature that helps with airflow, but I really wish it was removable for two reasons. First, after a year there’s random tobacco at the bottom, which looks dirty. Second, it reduces space a bit, that is, enough to be noticeable. The usable interior measures 14 3/8 x 10 x 4 1/2 inches: 646 7/8 cubic inches. There’s roughly an additional 90 cubic inches in the lid, but the included hygrometer and humidity system will take away from that.

Upon emptying the humidor I realized I had 81 cigars stored here, which now need a new home. While there was certainly room for more—probably an additional 30 before I had to start reorganizing—you aren’t going to get to 160 unless you are storing all robusto cigars in some sort of Tetris format that exactly zero cigar consumer has ever used organically. 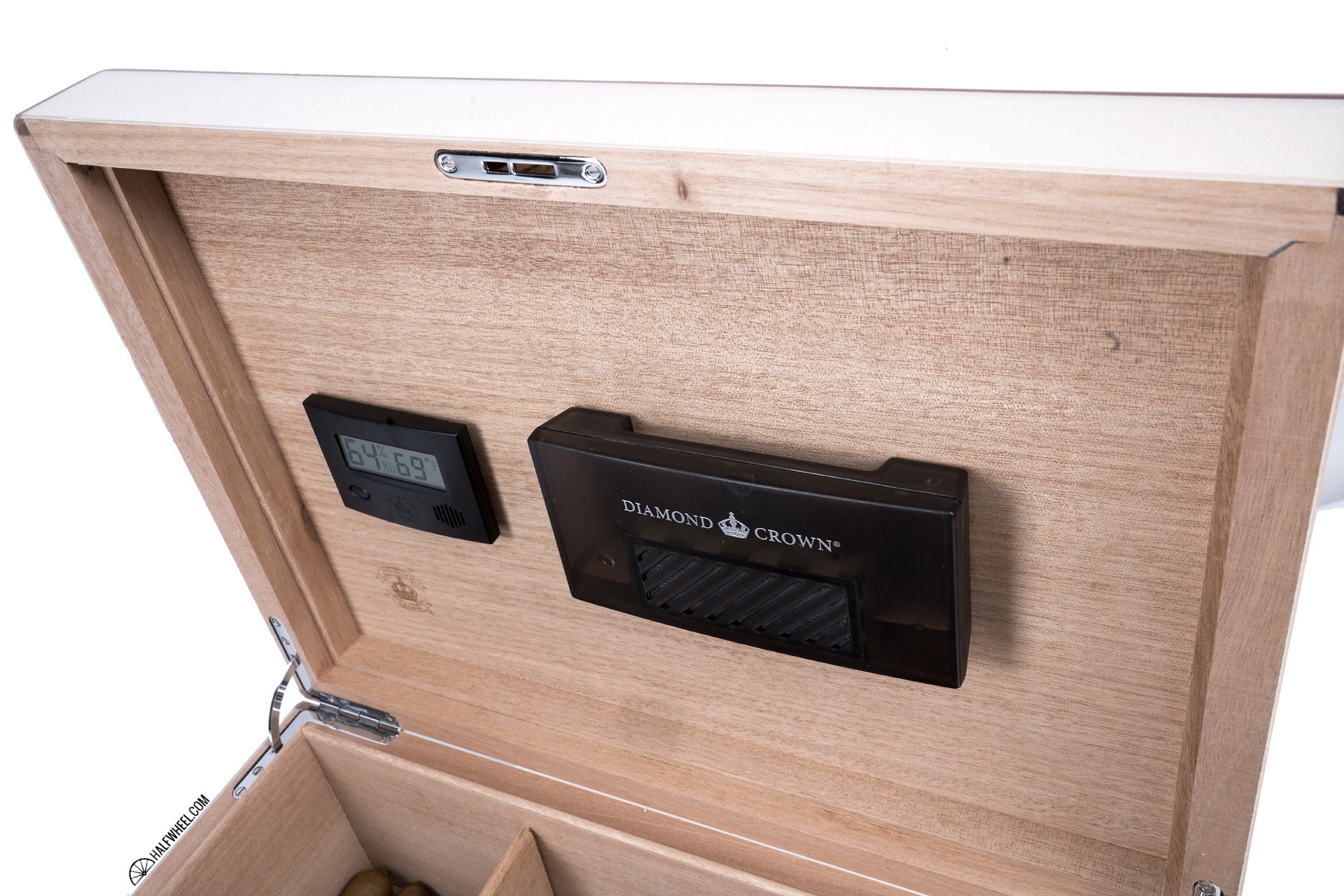 As far as humidity goes, the included Diamond Crown humidifier is passive. It requires distilled water, of which the company includes a tiny dropper to refill. I found that it ran a bit high for my liking, ranging between 70.8-72.2 percent relative humidity over the course of a six-week test. I then switched to using three 60-gram Bovedas and the humidor held between 69.2-70.4 over the course of three months of testing. I’d say the Diamond Crown humidifier is fine for most people, but I’ll continue with Bovedas as we have a lot of them lying around and the humidifier is quite bulky: 5 11/16 x 2 15/16 x 1 1/16 inches.

The included hygrometer also works, though the battery only made it for five months. One feature that’s nice about it is the ability to calibrate it via tabs on the back. It’s also magnetic which means it’s a lot easier to remove then some of the built-in solutions. It also means you can remove it and gain that space back, which is nice. 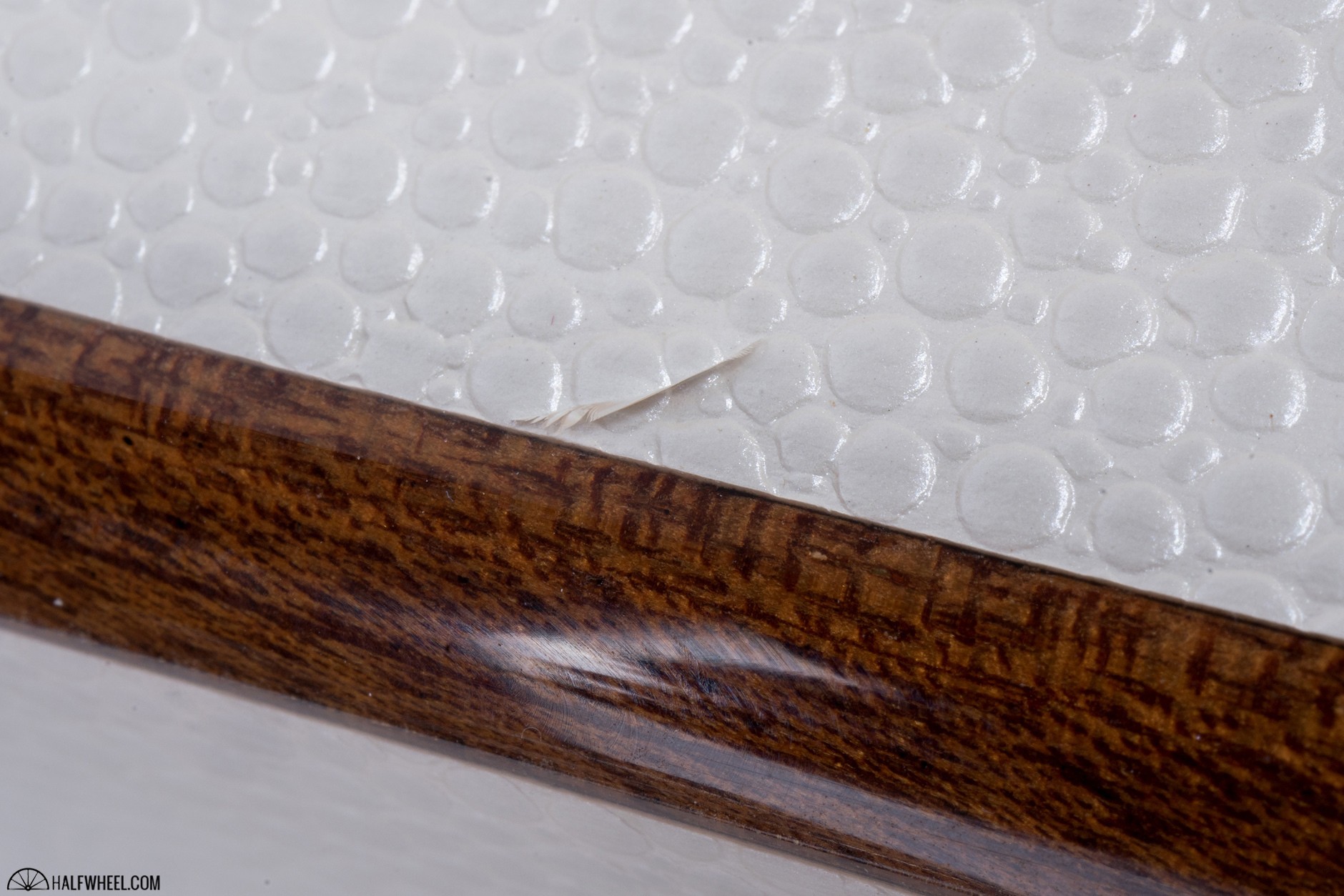 While the humidor works, the finish leaves a lot to be desired. The humidor has some imperfections underneath the lacquer, including one at the top of the lid that’s quite noticeable. There’s random smudges on the back that will scratch off, but were on the humidor when it arrived at the office and there’s some soft, almost insulation-like material hanging out of the hardware on the back. None of these things affect the humidor’s function, but all are marks that would lead me to indicate we bought a scratch and dent models; something we didn’t do. We paid $550, $25 less than the MSRP.

For the money, a 150-count Daniel Marshall Ambiante can be found for $600, though its suggested retail is $795. Given my experience with a smaller version, I’d definitely recommend the Daniel Marshall over the Diamond Crown. Ashton’s Savoy brand makes its top of the line Executive Series humidors in 100-count variants, though that humidor is listed as having an exterior dimension of 17 x 12 x 7 1/2, which is nearly double the volume (2,167 cubic inches) of the St. James 160-count, which is just below 1,295 cubic inches. Pricing is around $500 depending on the finish. Once again, I’d be more inclined to recommend that humidor based on my experience with similar models.

And that’s the issue with this humidor. When I finally agreed that I would finish the review, I looked up the price of the humidor. I was surprised. “We paid $550 for this humidor?I?” I questioned/shouted at Brooks. The Diamond Crown St. James Peabody works, but so do the other two humidors and they do so without any of the flaws and at rather similar prices. There’s nothing wrong with the Peabody, but it’s difficult to recommend given the options.

Corona Cigar Co. carries the Diamond Crown St. James Peabody 160-Count, which is where we bought it from.