In the final weeks of 2017, Davidoff of Geneva USA unveiled a new program called ACCESS, which would include the rerelease of rare and limited cigars from the company’s portfolio.

That program would evolve into what has been known as the Davidoff Vault Series, and has seen a steadily growing list of releases, from Zodiac Series cigars to anniversary releases and previously unreleased blends made by Eladio Diaz, Davidoff’s master blender.

Towards the end of February 2020, the company released the Davidoff Ginza 10th Anniversary, which was originally released in 2010 in celebration of the 10th anniversary of the Davidoff of Geneva — since 1911 flagship store in Tokyo’s Ginza district, which is known for its upscale luxury retailers and restaurants. 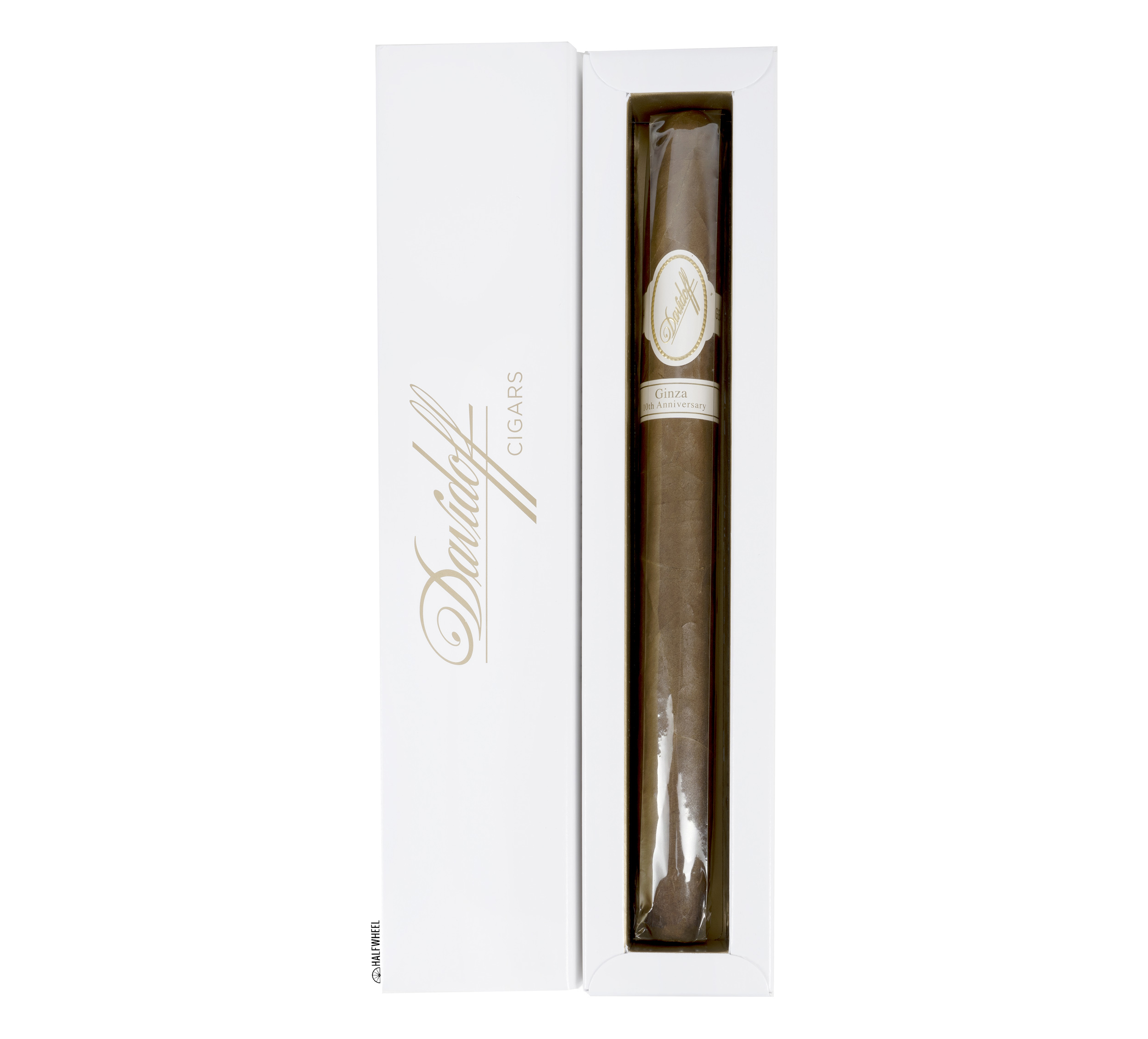 The cigar is a long salomones that measures 8 1/4 x 50, with a bit of a taper at both the head and foot. The blend consists of an Ecuadorian habano wrapper and binder, while the fillers contain three varietals from the Dominican Republic: piloto seco, San Vicente seco and olor seco.

For the rerelease, Davidoff didn’t disclose exactly how many were being produced, other than to say that approximately 4,000 cigars would be available in the U.S., with a smaller quantity going to Asia. Those cigars would be distributed through the company’s online store, it’s U.S. retail stores, Davidoff-branded lounges and selected other retailers. In the U.S., it comes priced at $38 per cigar and $380 for a box of 10 cigars. The Davidoff Ginza comes in a white, card stock protective coffin that is seemingly as much show and ritual as it is protection for the long figurado. Other than the Davidoff logo on the top and the company’s “time beautifully filled” slogan on the sides, there is no extra flourish on it; while the inside is a dark gold color, it isn’t embossed with jewels, nor does a song play when you slide open the box a la some greeting cards I’ve seen. Other than its length, the cigar itself is fairly standard looking, a well-rolled salomon with just a slight taper at the foot and head. It’s a vitola that should be fairly recognizable, though it lacks the more elongated, smaller foot of some others. The wrapper leaf is a very well tanned shade of brown; it’s not dark but it certainly is trying to be, pushing the boundary of just what can be called medium brown. While the veins aren’t big, there are enough of them that when combined with the visible seams, the cigar has quite a bit of visual texture, and I’m led to wonder how limited the selection of wrapper leaf that would fit this cigar might be. All said, it’s well rolled and maybe just a bit softer than industry average, or at least the average of what I’ve been smoking recently, feeling a bit Cuban in terms of give. It’s also by doing some tactile inspection that the wrapper shows how oily it is, even though it doesn’t look particularly glossy. While the wrapper has an aroma reminding me of cedar or oak, the foot offers a fairly light aroma of baked, unsalted pretzels along with a bit of orange or mango jelly sweetness, depending on the sample. The cold draw is a bit firm, and I can feel some added resistance from the cigar’s length. The flavor is fairly mellow, reminding me of damp tobacco getting ready for the roller’s table, with some suggestions at sweet cedar and marshmallow fluff but hardly any pepper to be found.

Much like with the cold draw, the length of the Davidoff Ginza seem to show the cigar’s length, feeling just a bit more labored than an average cigar, yet not tight as if it had been rolled improperly. It’s a mellow yet not overly mild profile, starting with creaminess on top of woods and just a bit of pepper, all fairly restrained in their intensity. There are flirts with a very subtle nuttiness and sweetness as well, though given how tempered everything is, I wouldn’t be surprised if some of their appearances get overlooked. if anything, the early goings of the first third are an exercise in paying attention to subtleness and nuance, both of which the Ginza offers in spades. After the first clump of ash falls off, the cigar picks up a bit of cake donut note, keeping in line with the overall softness of the profile while still delivering some mellow flavors. As the cigar loses that first inch, I can feel the draw begin to become a bit more familiar as well, still a bit voluminous but not as much as just about 30 minutes earlier. From there a milk-heavy latte or chocolate milk sweetness begins to enter the equation depending on the sample, another mild and mellow flavor that fits right in line with what the cigar has been offering to this point. It’s also worth mentioning that retrohales have been equally as mellow, with just the slightest amount of pepper to be found. Length aside, the draw has been very good, as have the burn line and smoke production. It’s definitely a mild, mellow and nuanced cigar with medium body and mild strength.

The chocolate milk note that developed at the end of the first third is what takes the Davidoff Ginza into its second third, taking on a bit more of a candy chocolate note before things progress yet again. The flavor gets a bit smokier and more intense, eventually shedding the chocolate in favor of a very subtle campfire smokiness, something that becomes more a part of the profile as the burn line progresses. There’s a bit of wood in the profile that stands out for being a bit dry yet still tangy, and it’s that latter aspect that turns a bit biting when the cigar gets over smoked, a reminder to slow things down and just let the cigar do what it’s going to do. Profile changes slow down a bit until the Ginza takes on more of the campfire profile as the second third begins to come to a close. It’s not terribly smoky but definitely much woodier than it was in the first third. When dialed in, it’s an exceptional experience, but sadly it only reaches that peak in one of the samples. All of the technical aspects continue to be stellar, while flavor has nudged up to medium, body is still around medium, and strength is moving from mild-plus into medium-plus territory. Given that the Ginza’s profile has been fairly mild thus far, I find myself retrohaling a bit more than normal, both because the cigar allows it and more of the nuance of the cigar gets put on display. Tuning into that experience shows the beginnings of black pepper before I get it on my palate, with woodiness continuing to develop, though sometimes it’s away from the high point it showed just a few puffs earlier. There are still appearances of creaminess at times, much fewer and farther between than in the first third but its scarcity makes it that much more appreciated as it softens and rounds out the profile, as well as adding just a bit of sweetness. Black pepper continues to build, now standing out as a truly distinct component of the blend as well as a very clean expression of the flavor. It progresses to a point where the profile is now a bit rougher, partially in contrast to its beginnings but also just on its own. The final puffs of the Davidoff Ginza show a slightly even more pepper-forward profile, with black pepper working the tip of the tongue but thankfully only minimal irritation to the throat. The final puffs bring in a bit of chalk and loaminess, which given the amount of Dominican tobacco in the filler, I’m surprised I haven’t picked up more of to this point. The draw, burn line and smoke production continues to be fantastic, with the cigar finishing at medium-plus in flavor intensity, medium in body and medium-plus in strength, with just a bit of fatigue setting in after more than two and a half hours spent smoking this salomon. I'm inclined to think that an eight-and-a-half inch long, limited edition, $38 cigar might not be the most appealing proposition to a good number of cigar smokers. But if you're willing and able to get over those objections, the re-released Davidoff Ginza 10th Anniversary has quite a bit to offer. The first third is a masterclass in nuance, subtlety and complexity; a hushed profile that still manages to speak volumes. The progression into the second third is interesting and brings the cigar into a fuller and dare I say more mainstream profile, while the final third takes that a step further with varying results. It's been said here before that it's nearly impossible to find a cigar with a start-to-finish experience that is perfect, so finding some truly great puffs should be rewarded, which is exactly what the first half of the cigar offered. While I'd love the second half to have shown a bit more restraint, I'm certainly not complaining about it or the overall result. If this is a cigar you can find, afford and give the attention it requests, I have no doubt that you'll find yourself rewarded handsomely. Yes, it's a big cigar and an expensive one at that, but most importantly, it is one that is very good.