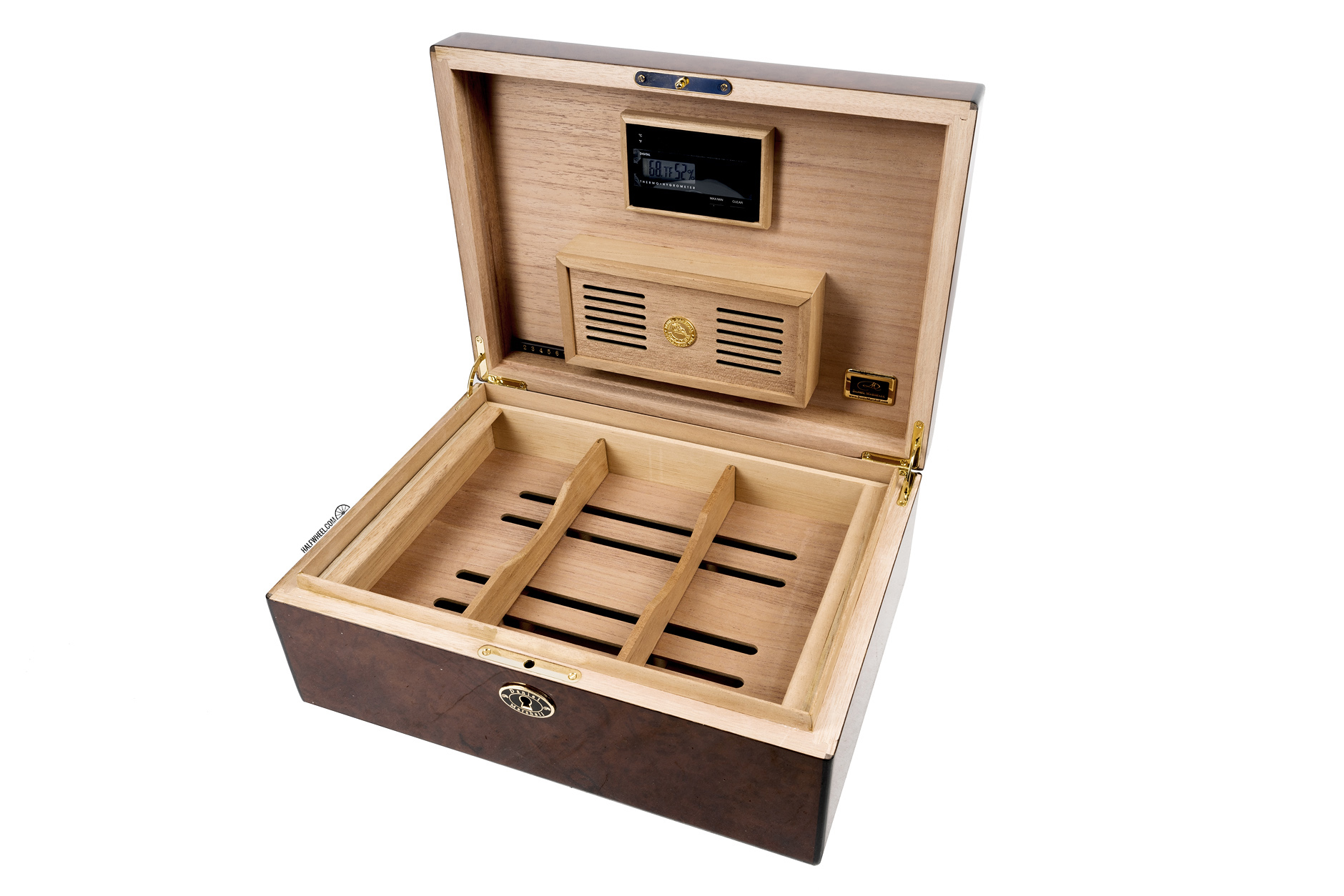 To me, there are two aspirational humidor brands: Daniel Marshall and Elie Bleu.

If you want a humidor from either brand there is a good chance you are pretty serious about not just your cigars but how they are stored. Unlike most of the humidors on the market today, both companies make humidors in their own factories with an amount of hand labor that is quickly becoming a thing of the past. Daniel Marshall’s humidors are made in California in a style that is very much classic: high-end woods in dark brown colors with generous amounts of lacquer. The company is probably best known for the Treasure Chest humidor which has a slight curve to the lid, but the company also makes humidors in more traditional rectangular shapes. 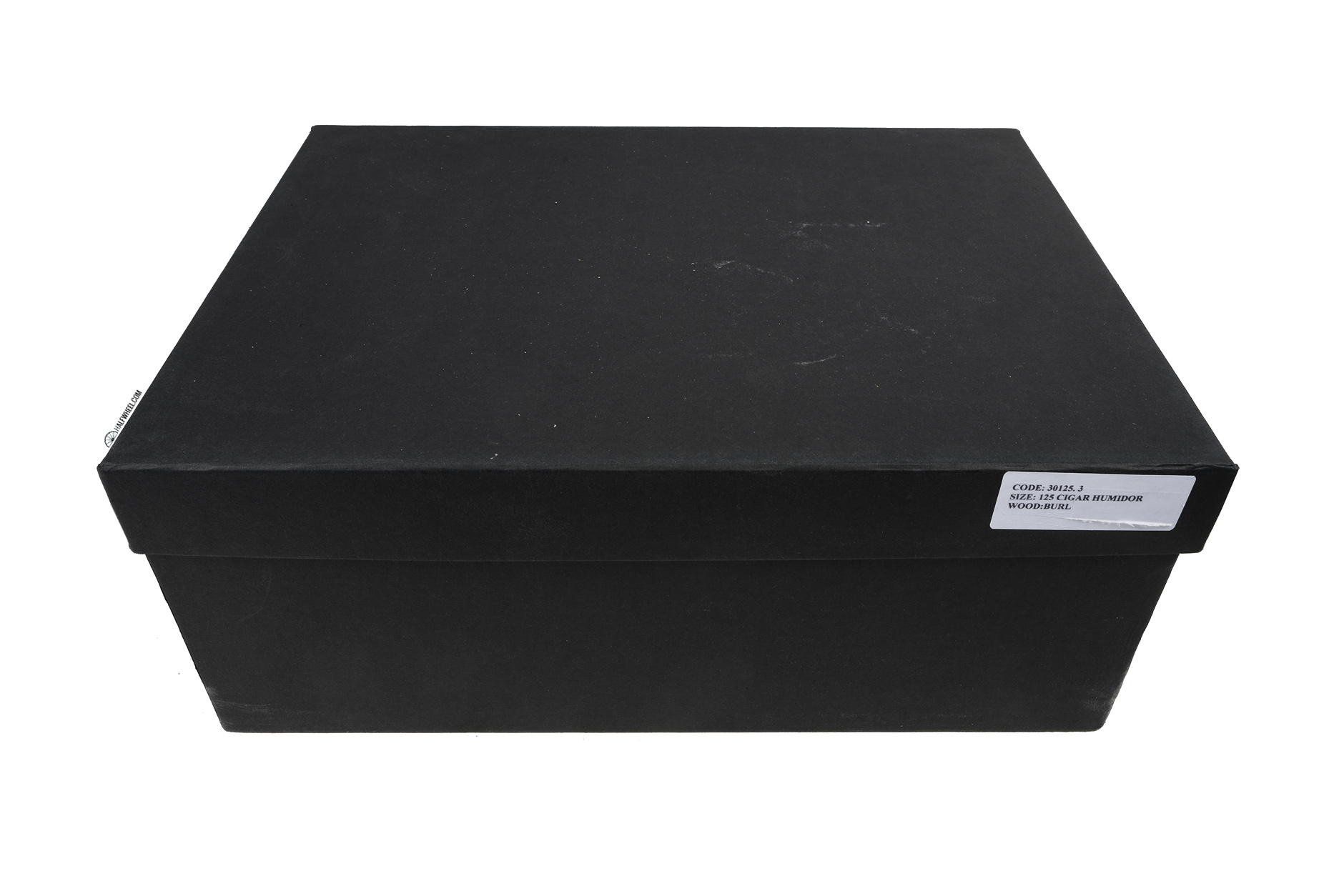 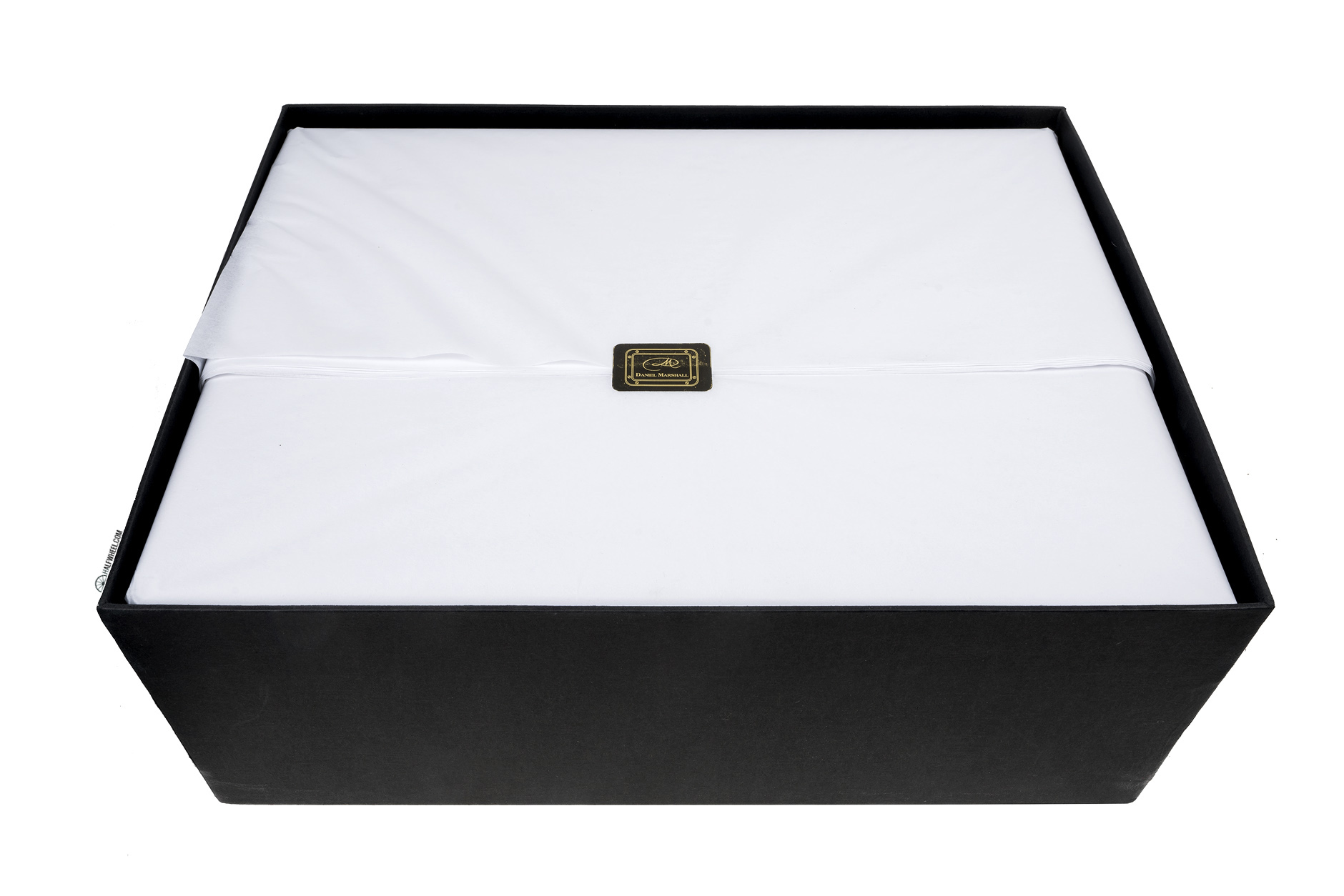 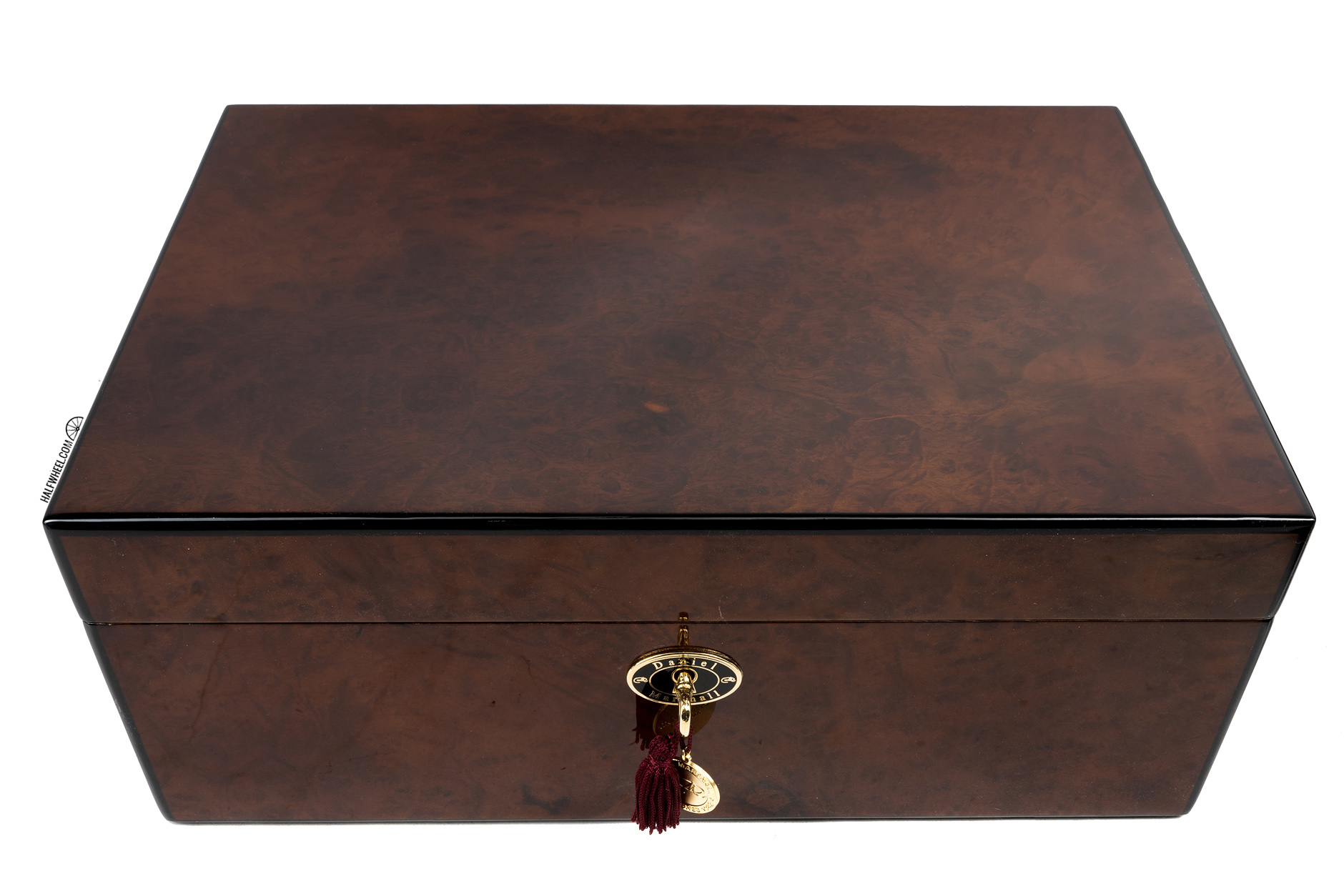 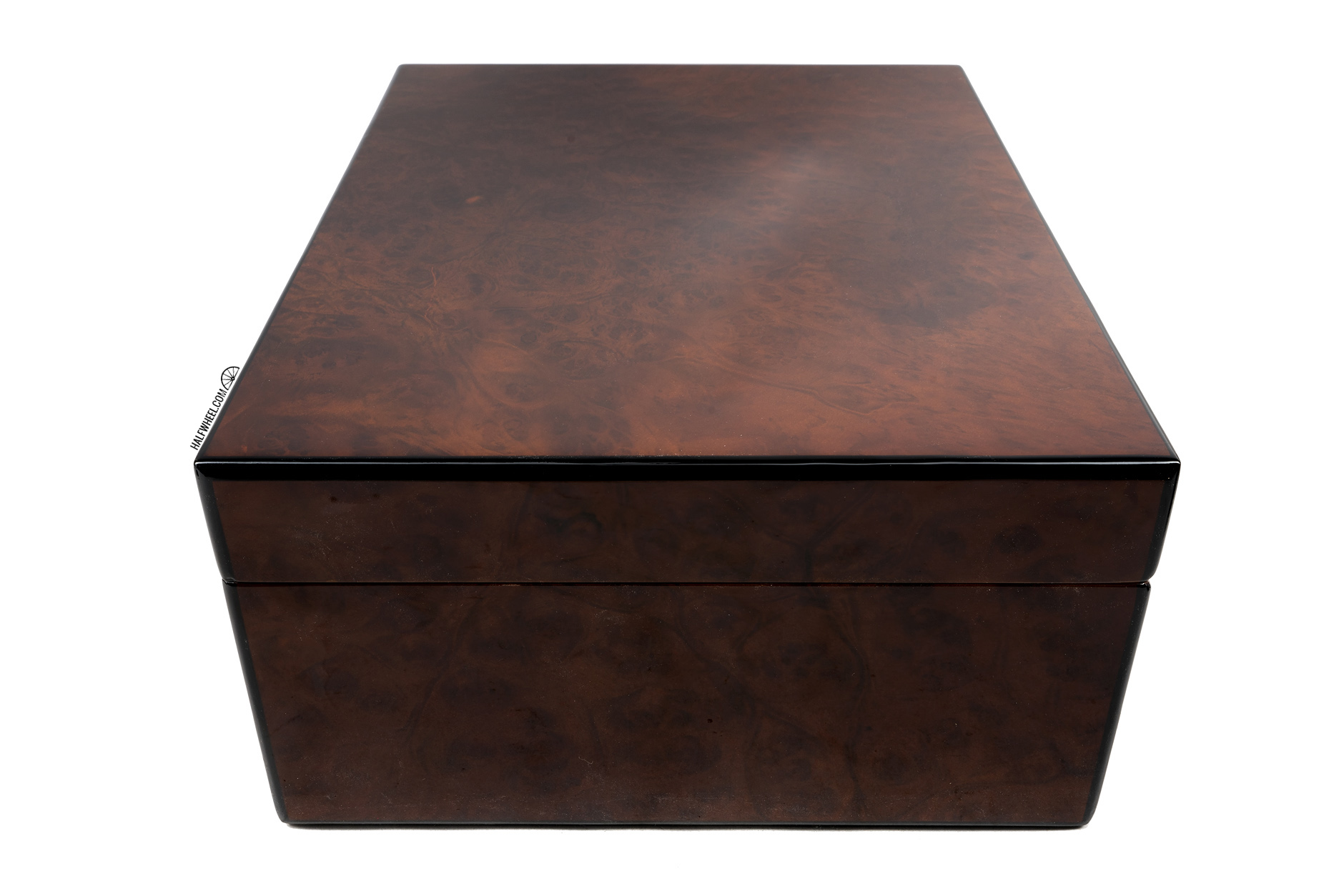 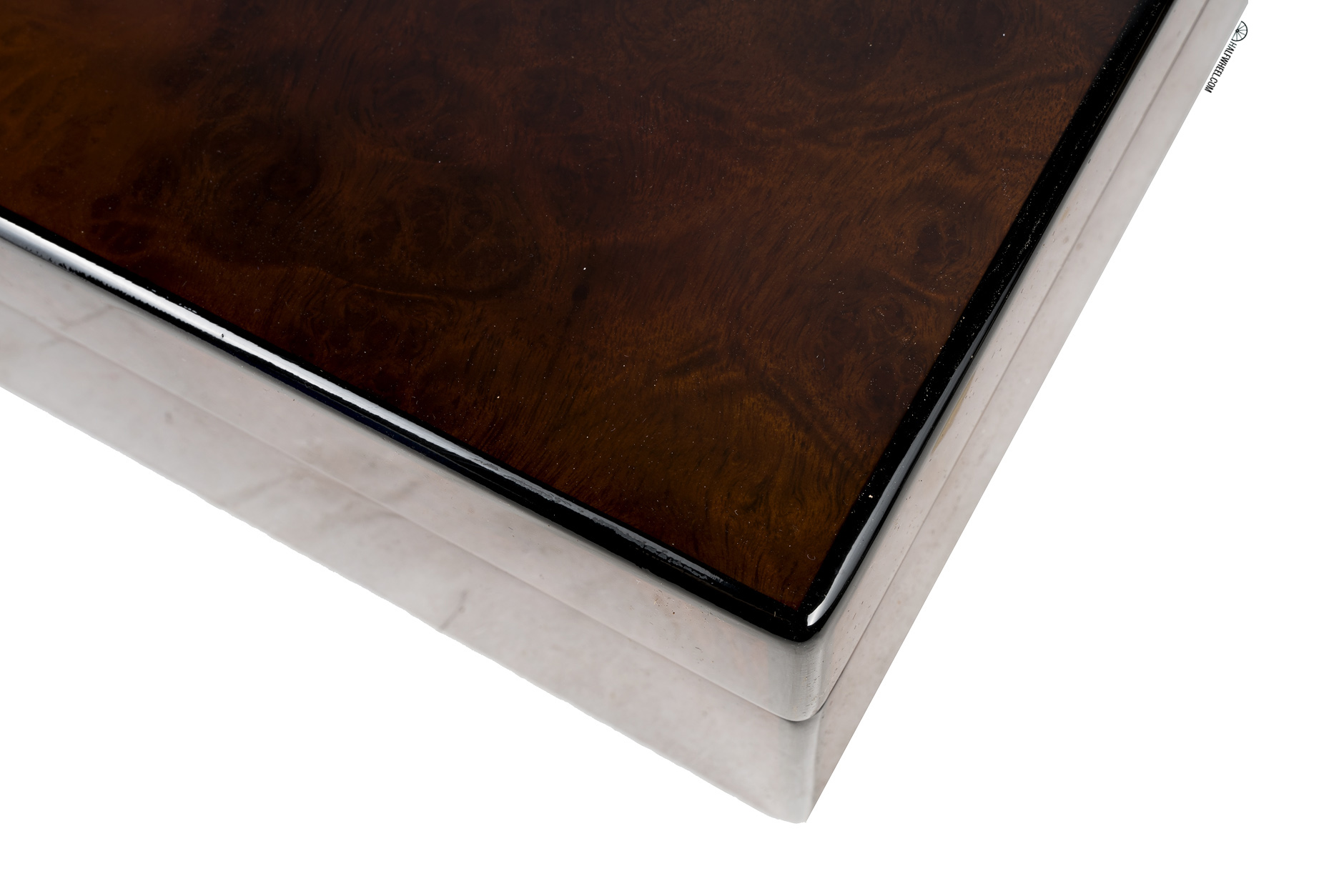 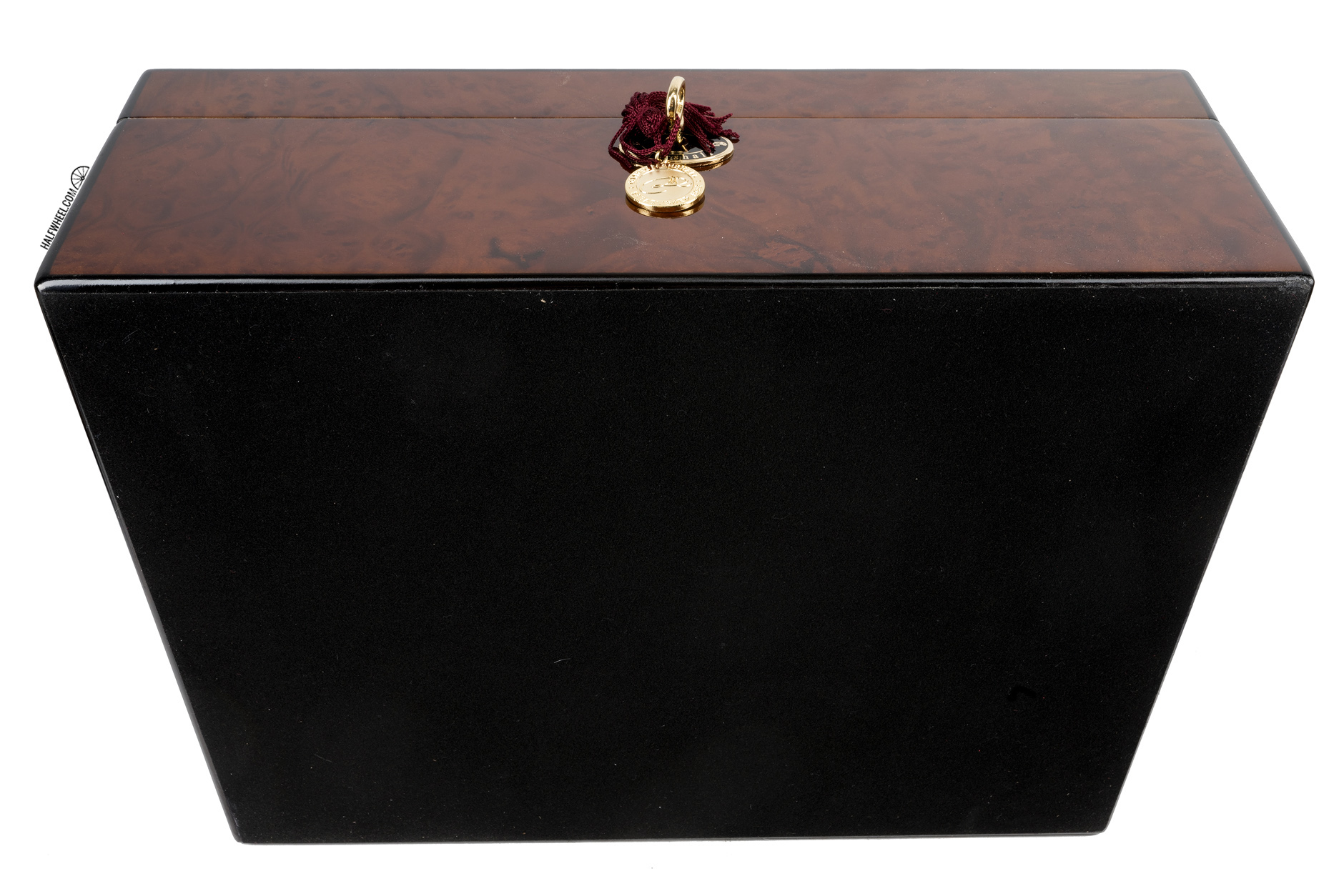 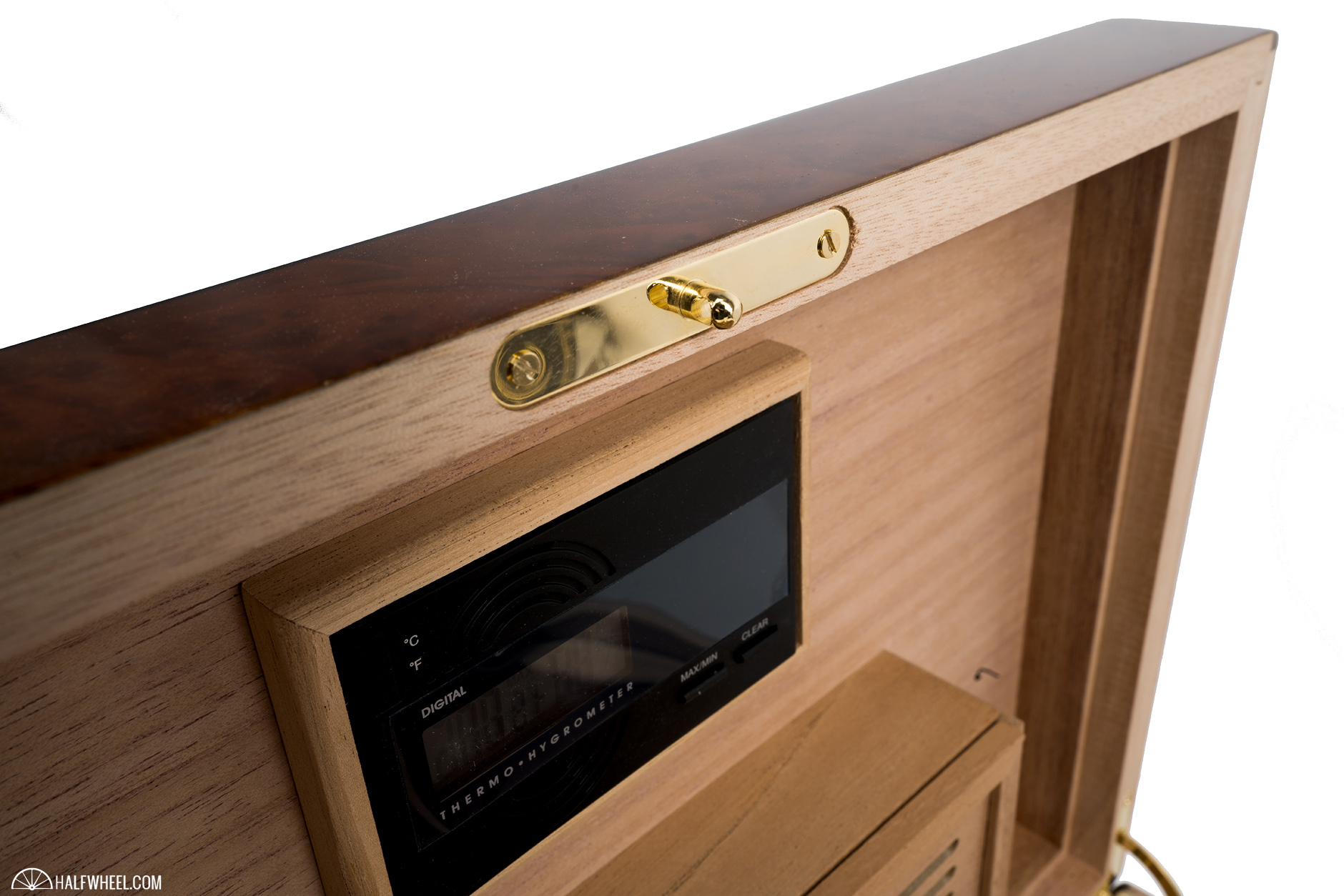 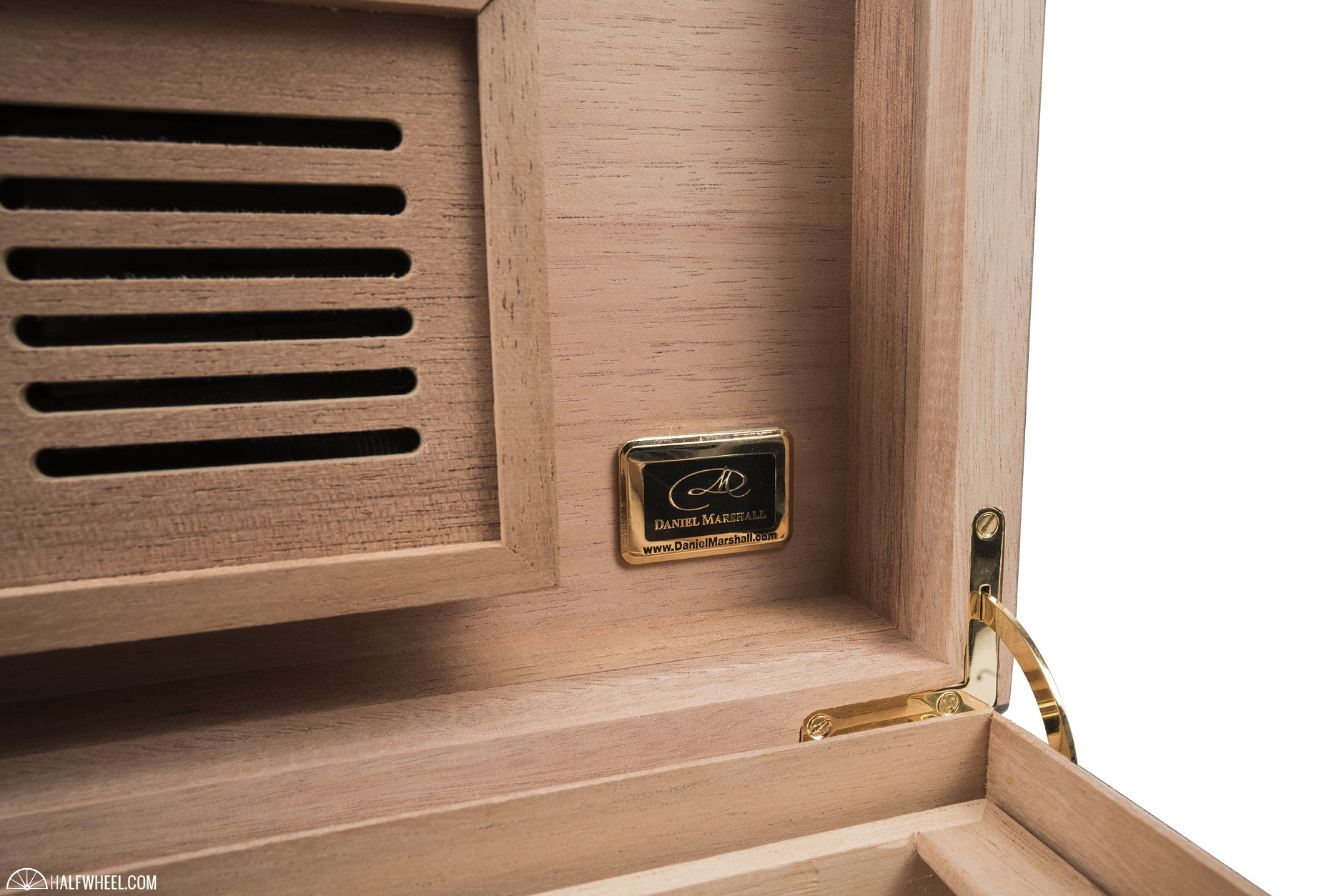 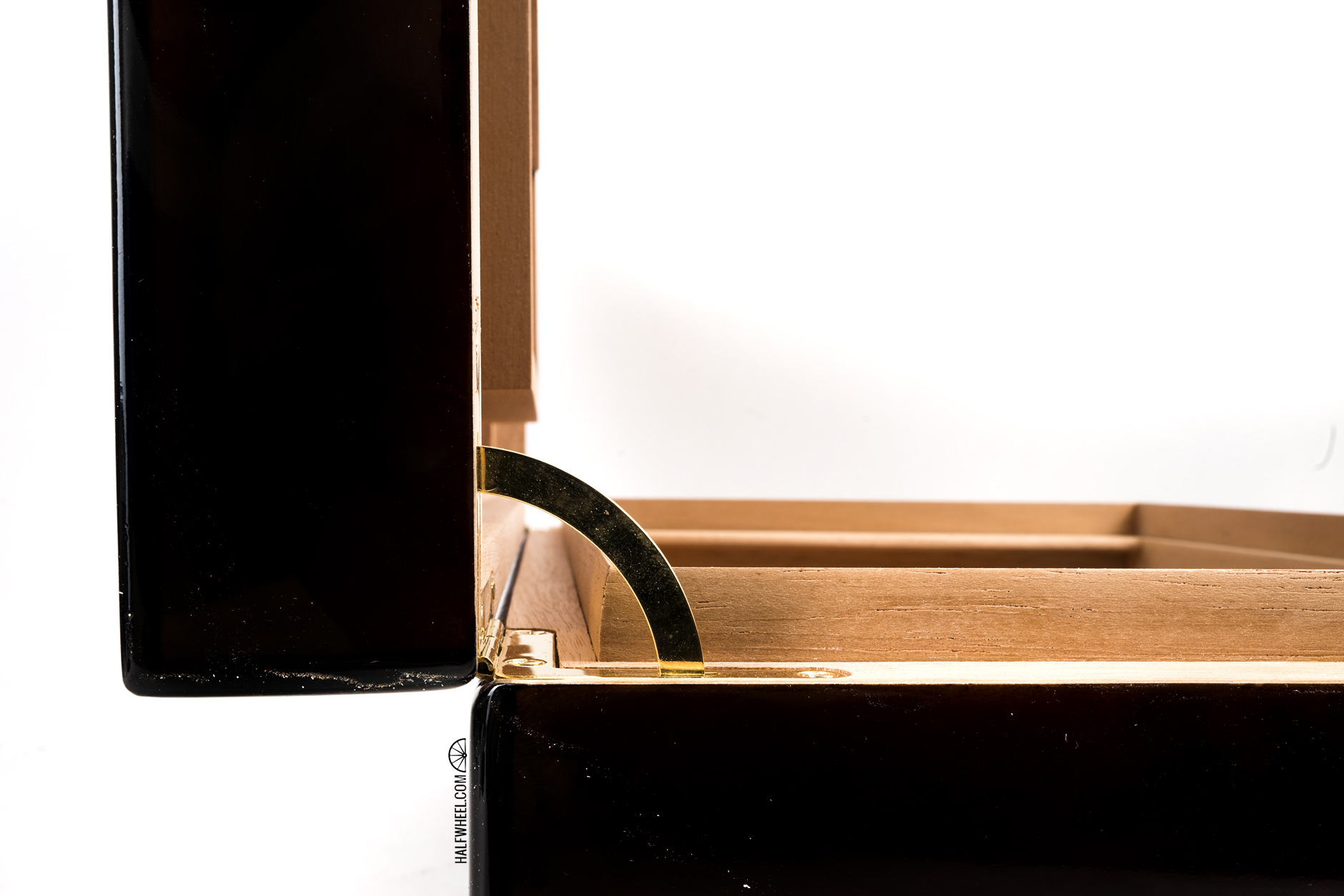 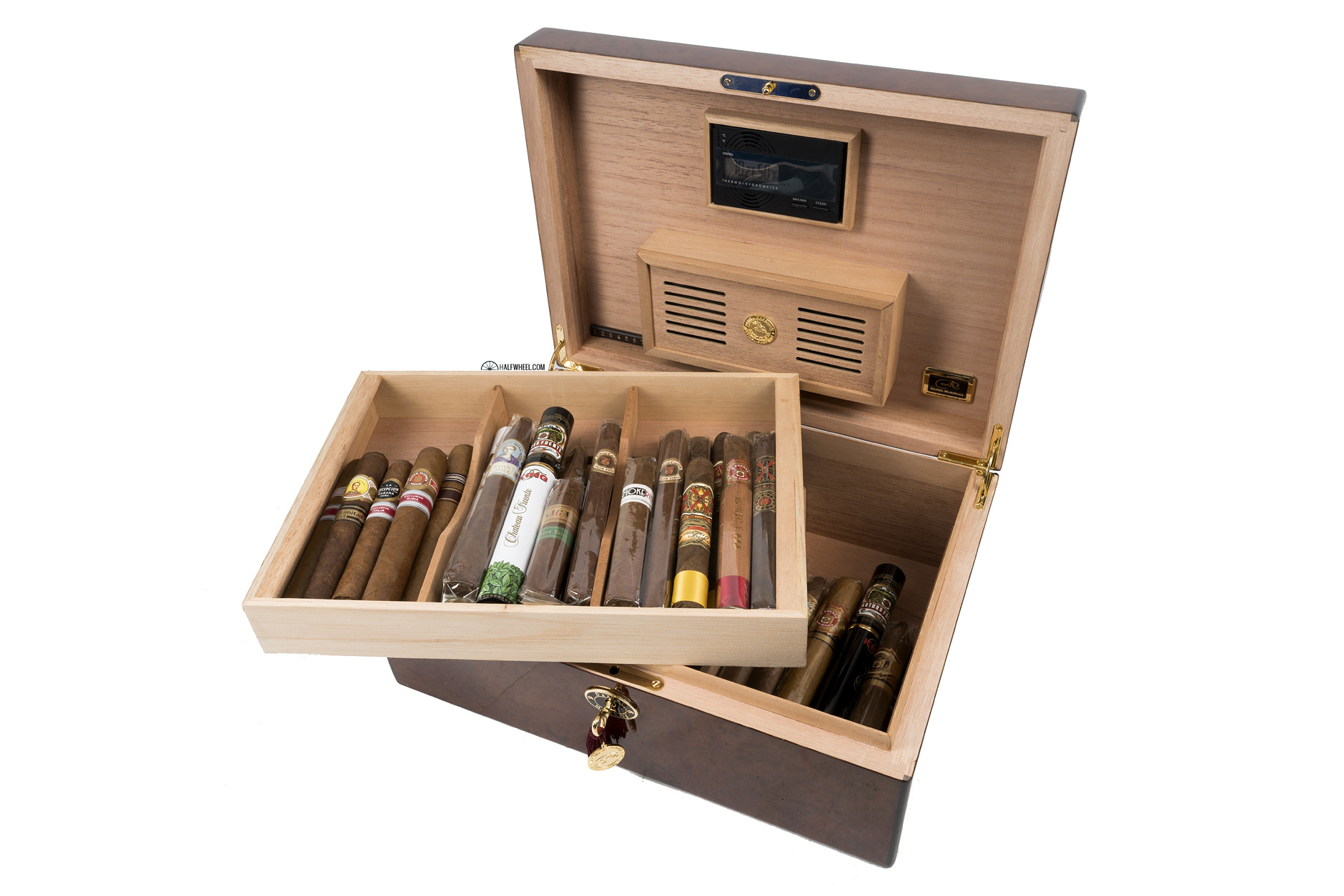 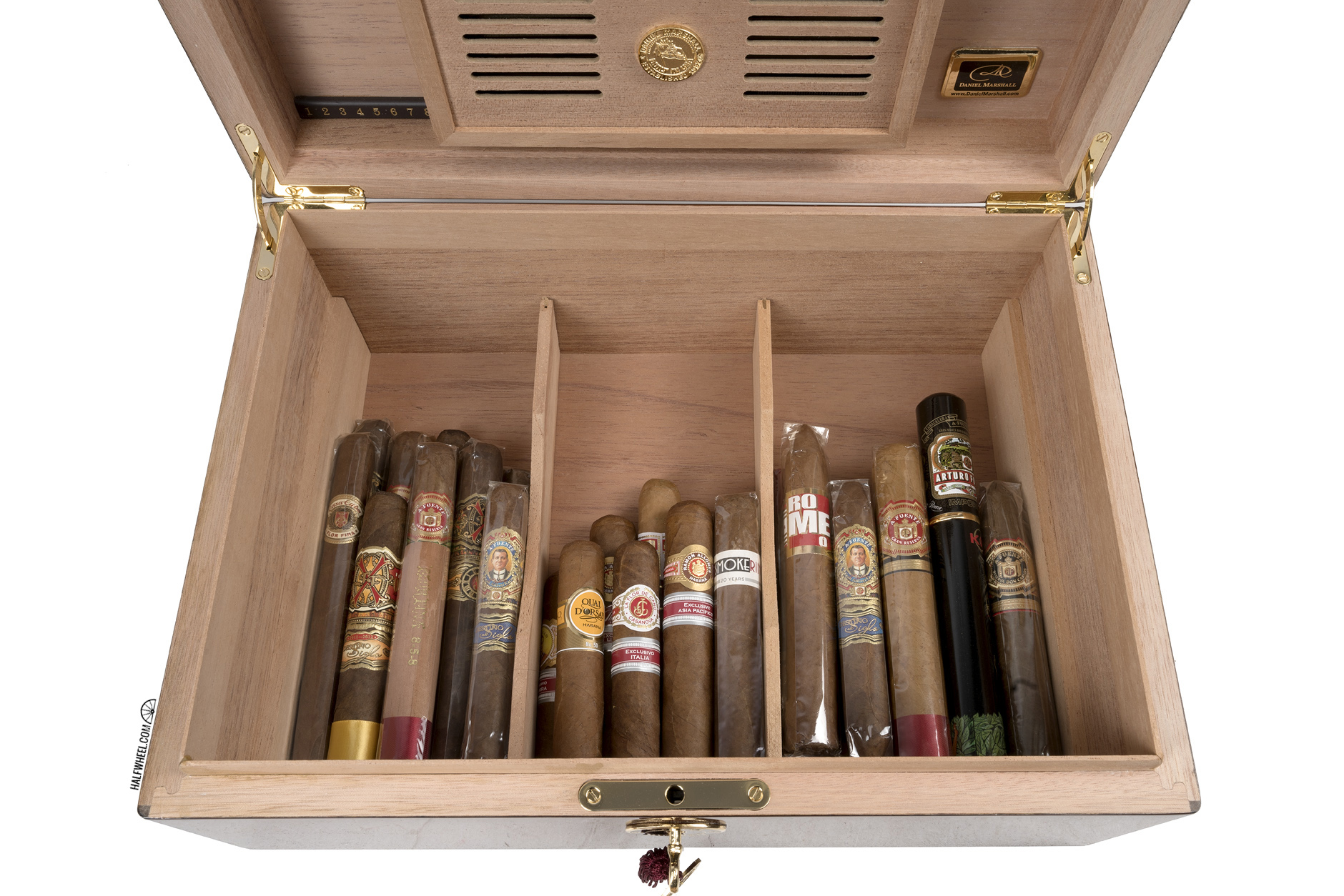 The exterior measures 14 inches x 10 x 5.5, while the inside is 13 x 9 x 3.75, though the lattermost dimension is somewhat of a guess. Because of how the tray works, measuring interior height is pretty challenging; even without the tray it’s not entirely clear what the absolute maximum usable space would be.

Daniel Marshall describes the lacquer process as a “1,000 coat finish,” and while I don’t think there are 1,000 coats on this, there’s a lot of lacquer. When you see a piece that is this glossy it means that the wood almost jumps off the surface. In addition, the burl wood is accented by a black line that runs on the edges of the box itself.

Inside there is untreated Spanish cedar that comes from Brazil. It’s lighter in color than other humidors that aren’t using Spanish cedar and has a distinct smell. There is also a removable tray that has two dividers. It’s just a tray, but there’s a certain level of detail to its corners that give me the impression that it is definitely overbuilt. Underneath the tray is the bottom of the humidor, which doesn’t feature any removable vents.

Like every other humidor I’ve seen from the company, all of the hardware is gold-plated including the hinges, screws and included key.

Like a humidor should. The only special thing to note is the hygrometer can be removed, either by getting your finger in the space between it and the edge of thee wooden accent piece, or putting something like a knife in there. Once removed you will be able to replace its battery. 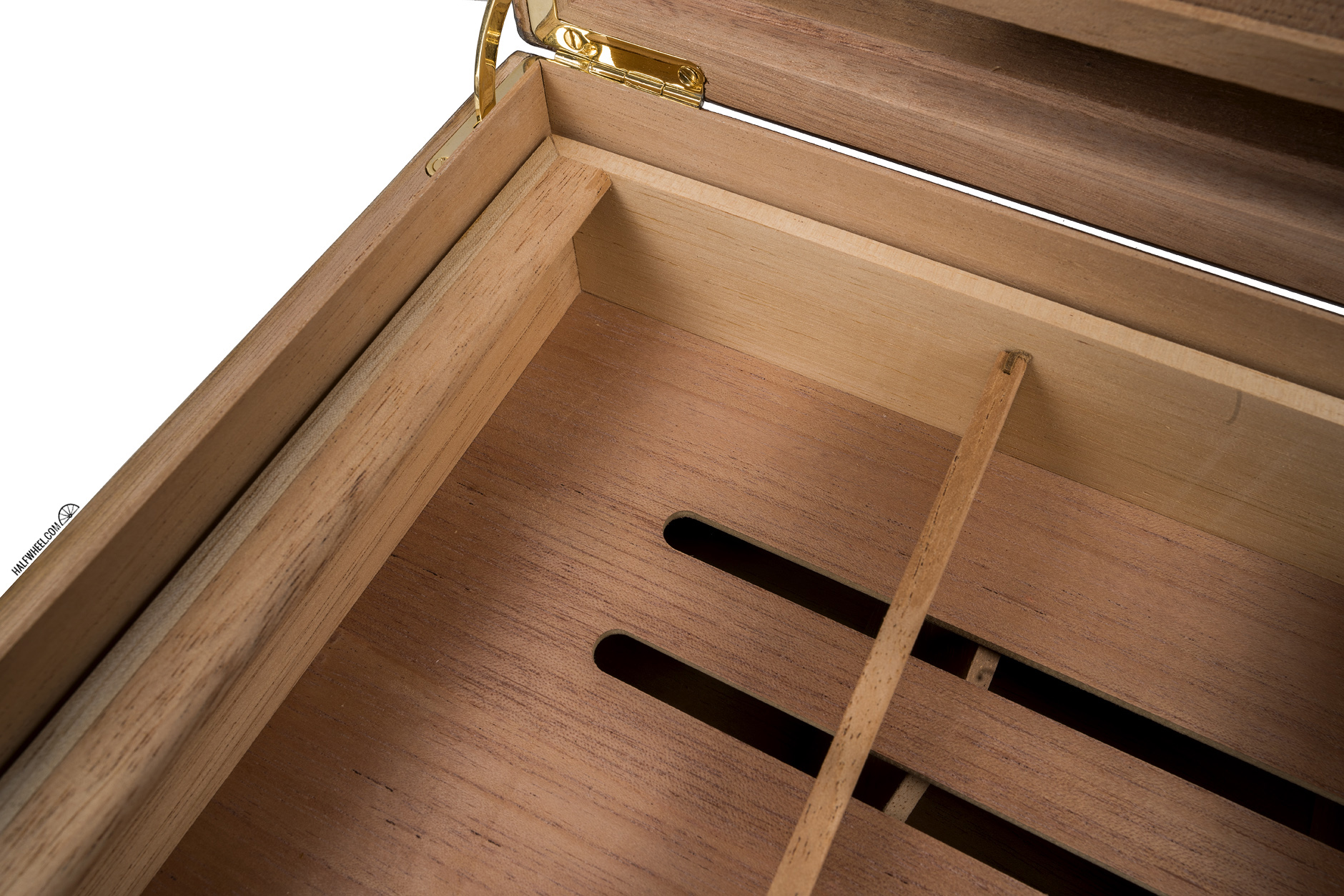 It’s made in the U.S.A., which isn’t common. In fact, the last American-made desktop humidor I reviewed was a Daniel Marshall. 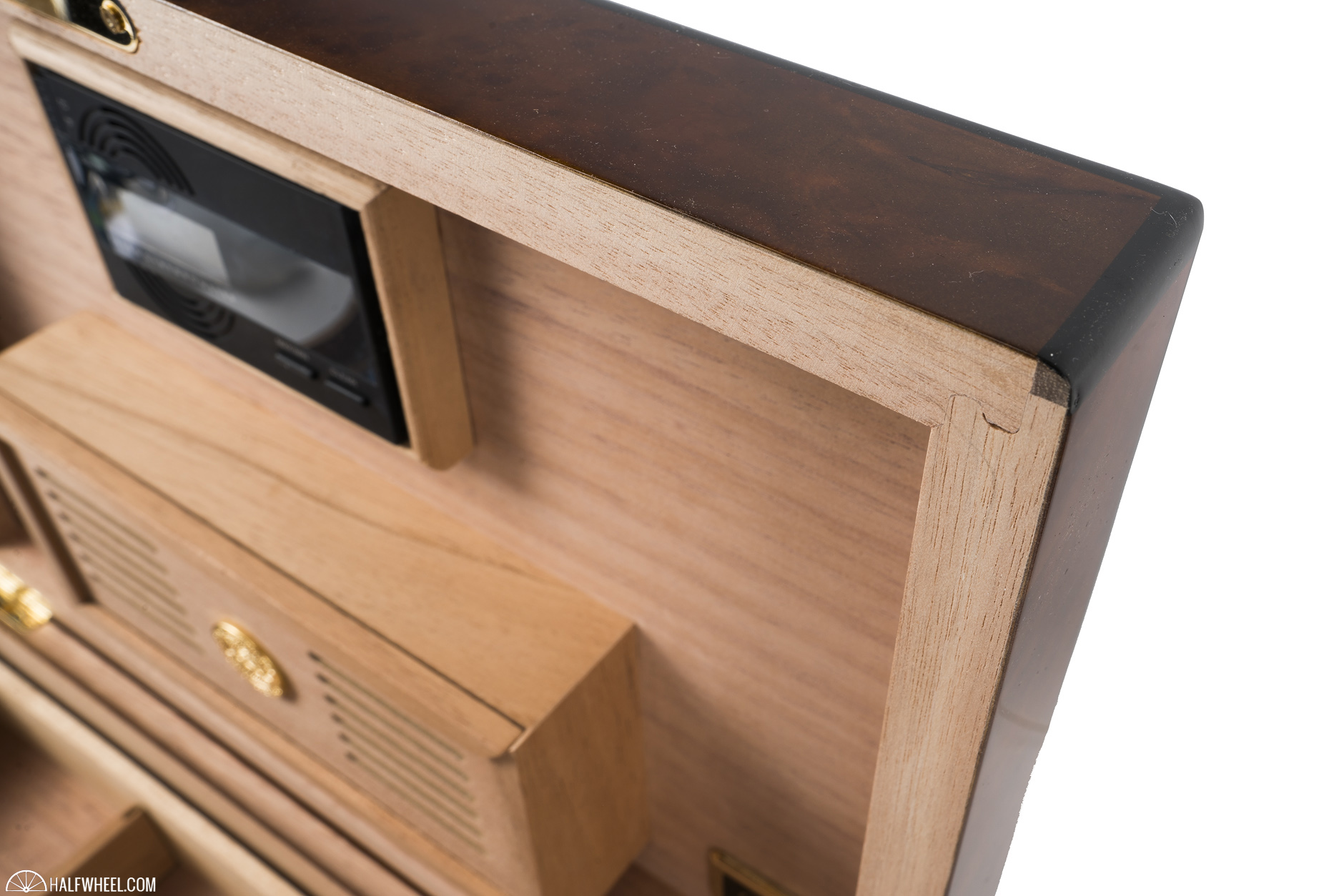 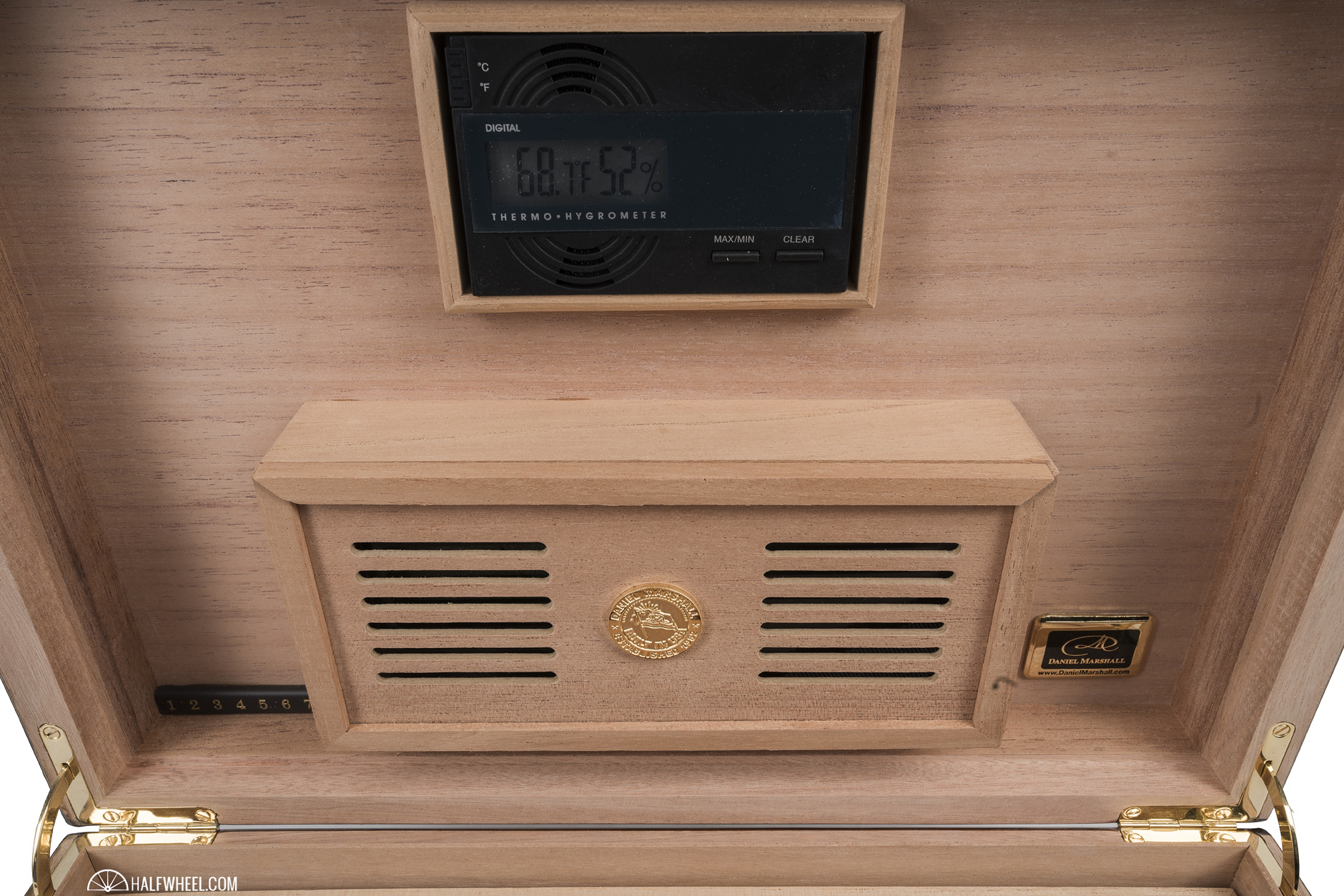 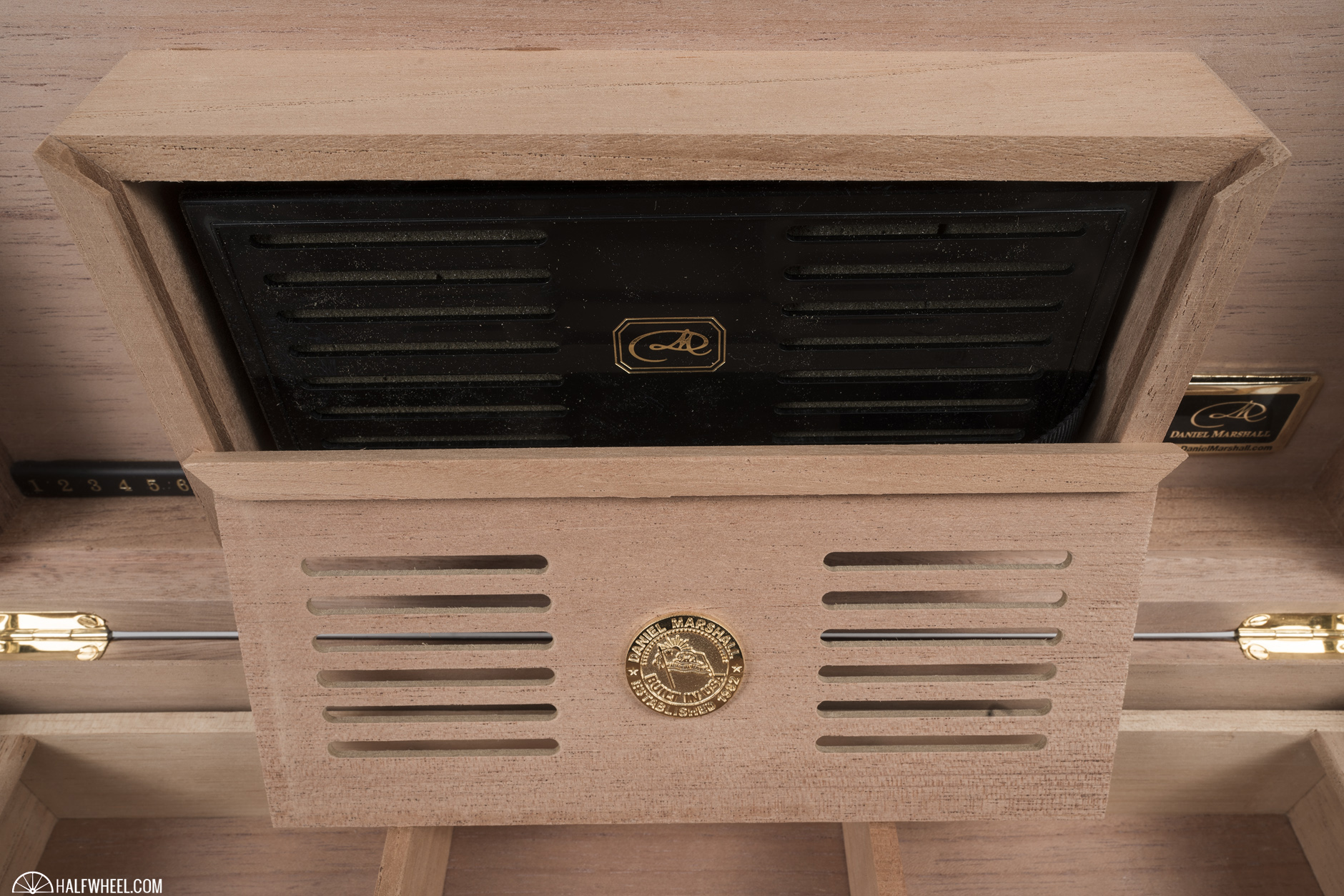 The biggest competition is Daniel Marshall itself. The company sells Private Stock humidors, slightly blemished new models, at pretty steep discounts. At this moment in time, there aren’t any Signature Series 125s in the store but I’d imagine you could expect to save between 30-50 percent when it happens. 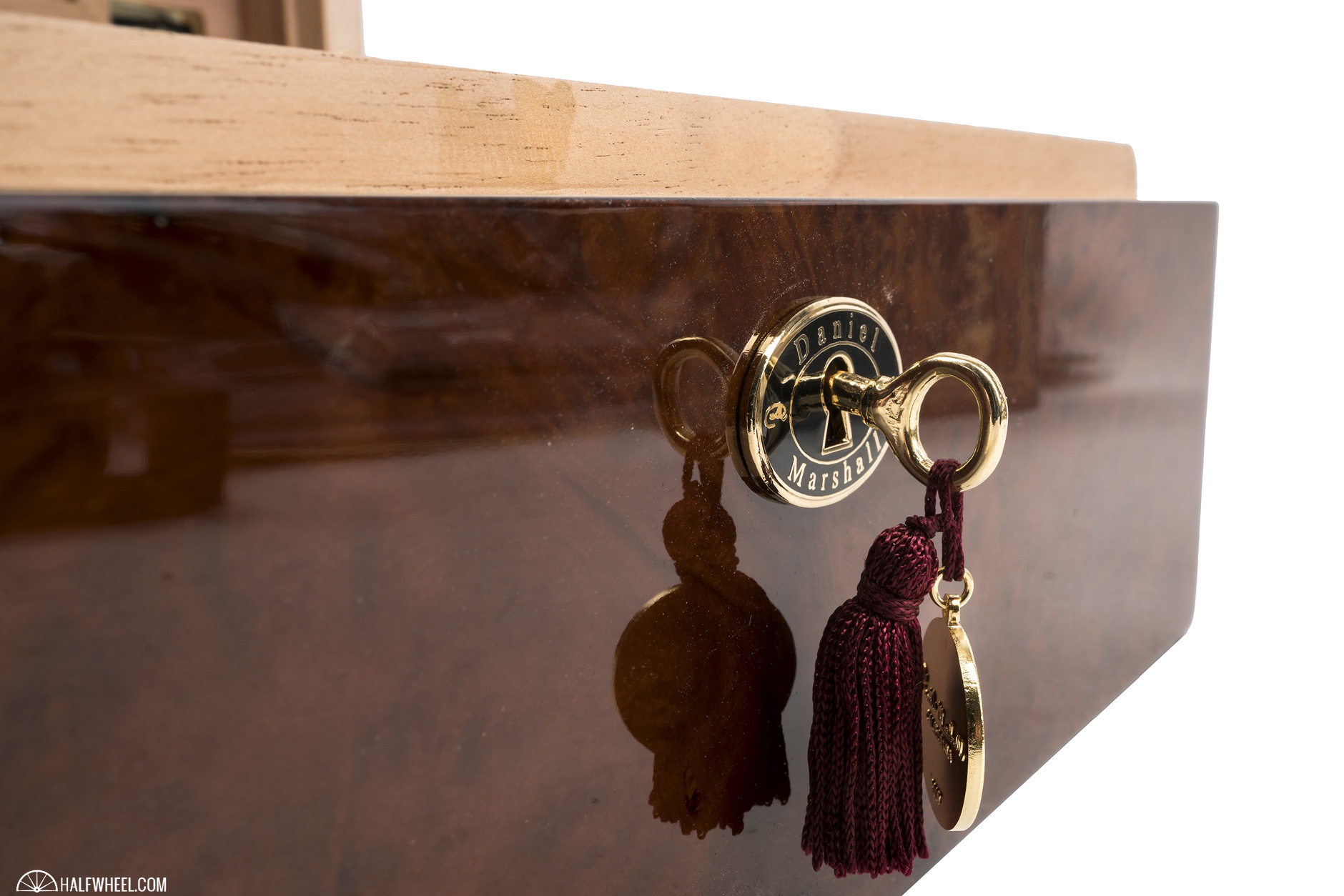 I definitely would recommend a Daniel Marshall humidor but whether that’s this one is up to you. I would probably spend the extra money for the slightly larger Treasure Chest or save money or go for the cheaper Ambiente, but that’s just me. The important thing to note here is that I’ve yet to find any reason to believe that any of the desktop Daniel Marshall humidors will function differently; the choice comes down to what size you want, what exterior you want and how much you are willing to spend. If you want a traditional-looking, American-made humidor, this is the best option, albeit one of the only options. Regardless, as someone that’s used Daniel Marshall humidors for years, I can tell you they are built to last and they will, just don’t use anything that comes attached to the lid.

The humidor for this review was sent to halfwheel by Daniel Marshall.