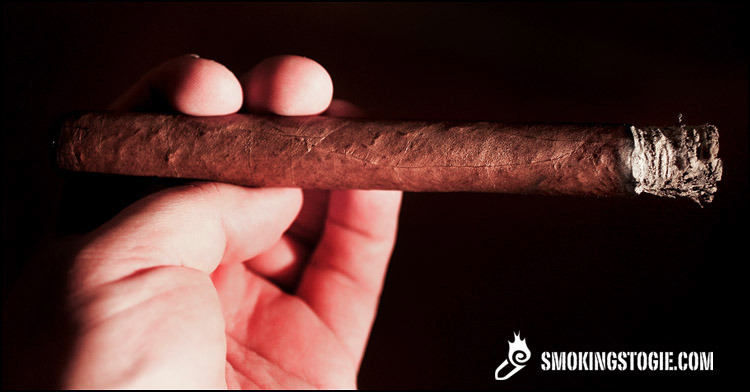 The Fuente and Newman families run a forum at CigarFamily.com that has been in place since before 1998. Two times in its history, that I know of, the companies have run a contest to give away some unique cigars to its forum members.

However, MU Mike gave some info (via the comments from this post) on other releases from the Cigar Family history:

Being on CF since ’99, I can tell you there were several other times a limited run of cigars was offered just to CF’ers.  The first was in 2002 I think and it was the AF13 cigars (Destino al Siglo) in a box of 13, which later became the Don Arturo Gran Aniverxario sungrown [the AF13 is still sold in it’s original form at Casa Fuente. ~ed.].  Another time involved the Opus Love Story in a box of 5 which later became the Opus Love Affair.  However, both times we had to pay for those cigars as opposed to the CF10 and CF163 cigars, which were free.

The blend is unknown; it’s not just a Fuente Fuente OpusX blend, it’s a bit different than that.

The CF10 is about the same size as a Reserva D’Chateau (7 x 48) and according to reports, they were originally rolled back in 1998/1999 and were kept aging until they were given out in 2006. Interestingly, the wrapper is the same rosado wrapper found on most OpusX cigars, however, it is from the very top primming.

While very few people know the exact numbers of Cigar Family 10th Anniversary sticks were produced, it is generally believed that less then 2,000 were made with 1,000 of them given away to the members. The few remaining cigars left over will be used mostly as auction items at future charitable events.

The boxes included 10 cigars, each in it’s own glass tube. The band is attached to each glass tube, so each individual cigar is actually unbanded inside the tube. The box itself, and the bands as well, each have the Cigar Family logo on it with a representation of the Cigar Family Charitable Foundation compound on it. 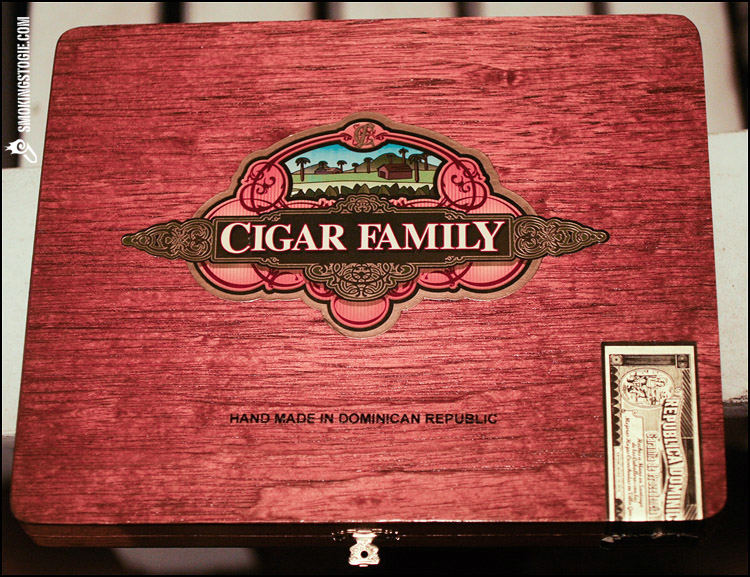 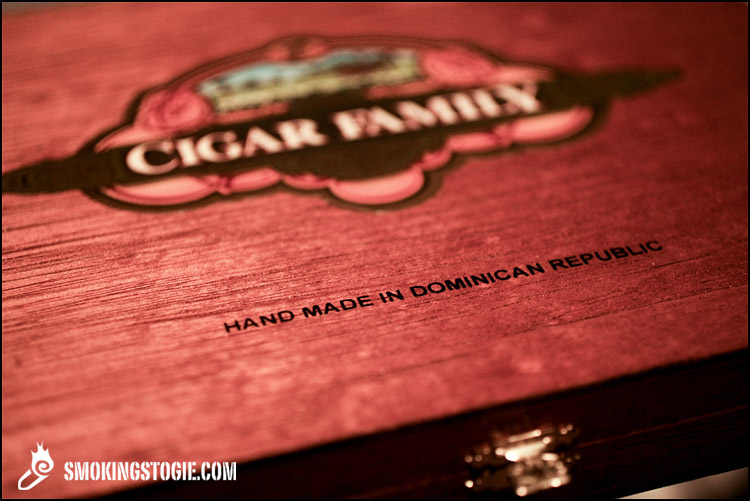 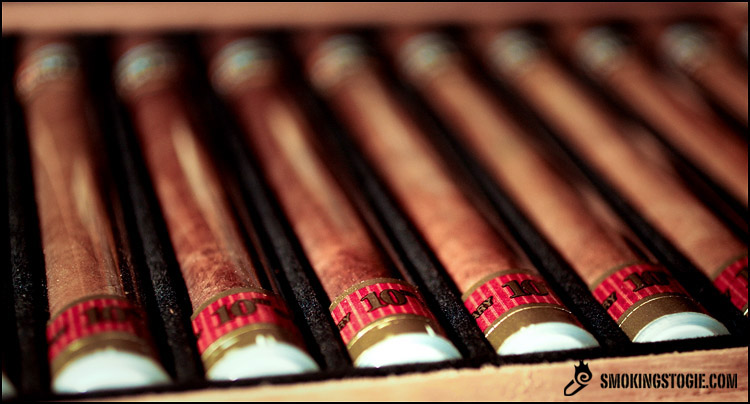 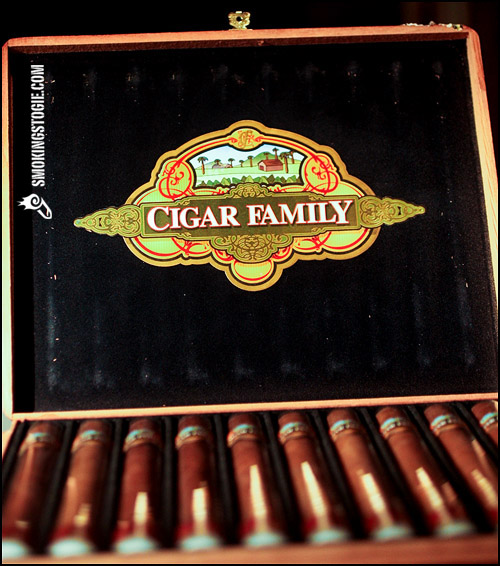 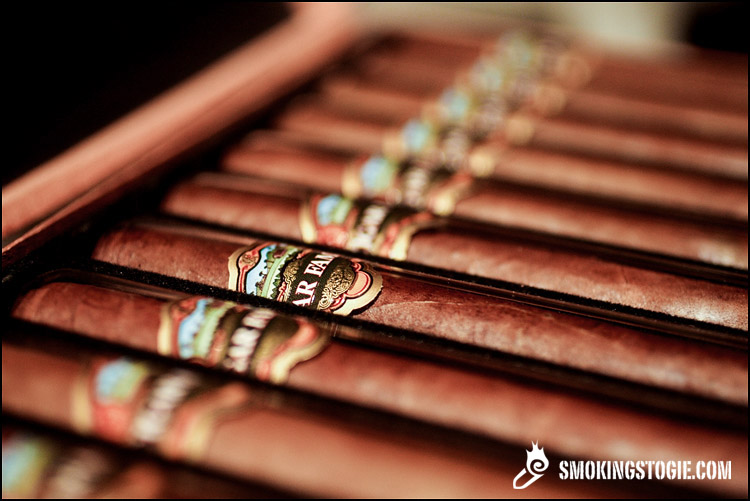 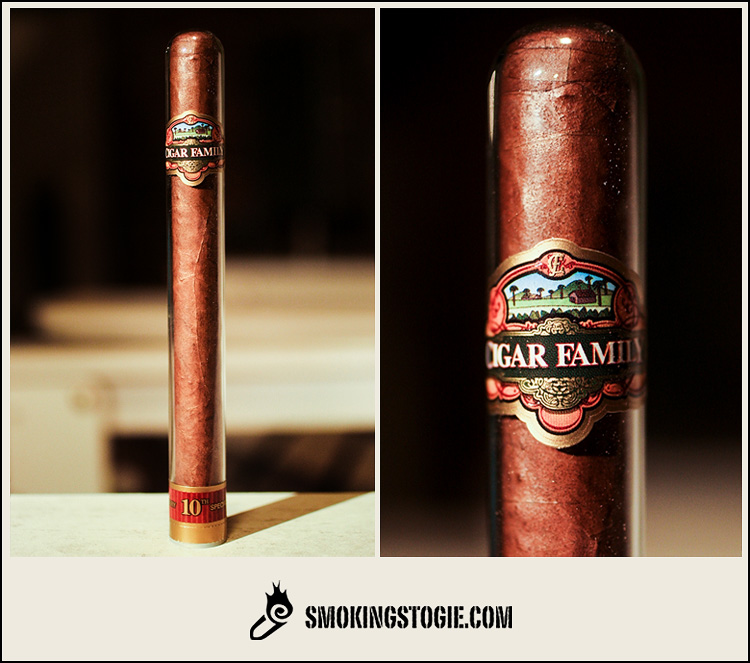 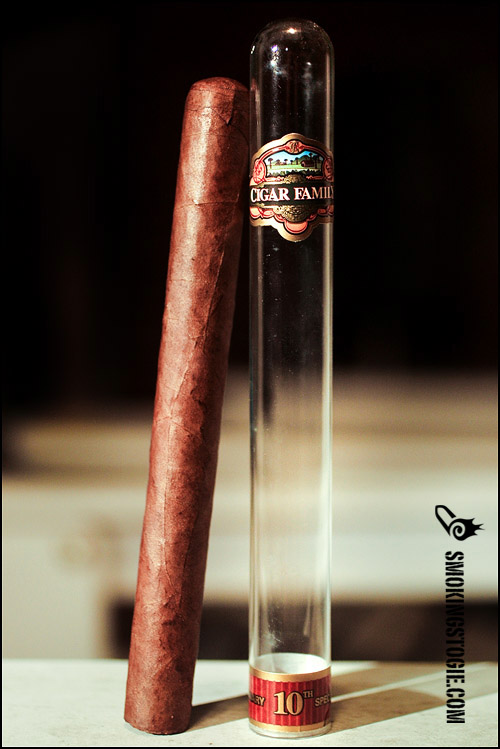 This is a physically large cigar when first viewed and the wrapper is a medium brown color and smells so sweet it almost seems to be infused, although it is not, obviously. Just an amazingly sweet tobacco scent. The cigar is extremely spongy when squeezed, undoubtedly due in some part to being stored in a tube, and while it is not exactly a seamless wrapper, there are no major veins or bumps. The cold draw is quite sweet as well, with just a tiny bit of cedar and pepper.

The first third starts out quite mild, with that same sweet tobacco flavor from the predraw and a bit of pepper. There is some sweet and creamy chocolate and leather notes as well, but they are barely strong enough to register.

The second third does not seem to add much to the mix. Still the same basic profile, although the cigar seemed to get a bit grittier and earthy towards the end of the second third and I did notice just the smallest amount of a fruit note, almost like raisins, but there was not enough to really identify it with any certainty. The burn is great at this point and I have had no problems with draw. 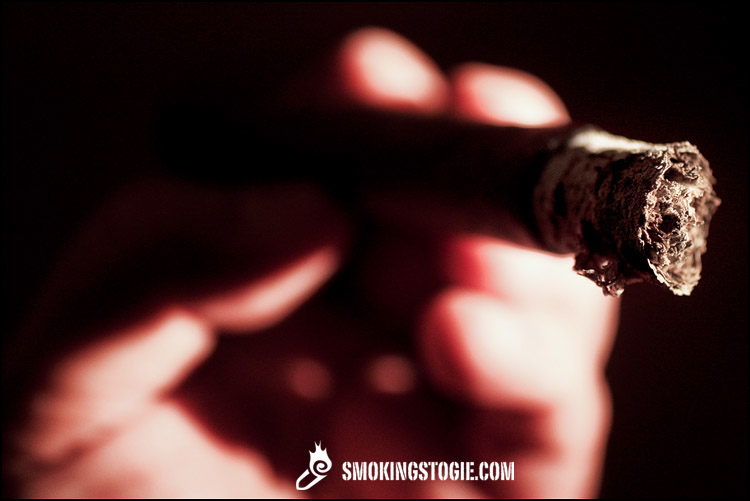 Sadly, the final third introduces nothing new; still the same flavors of mild sweet tobacco with a bit of chocolate and leather. Still very mild with just the faintest touch of pepper every once in a while. The cigar never changed much, but it also never got harsh or bitter, even at the end of the smoke. 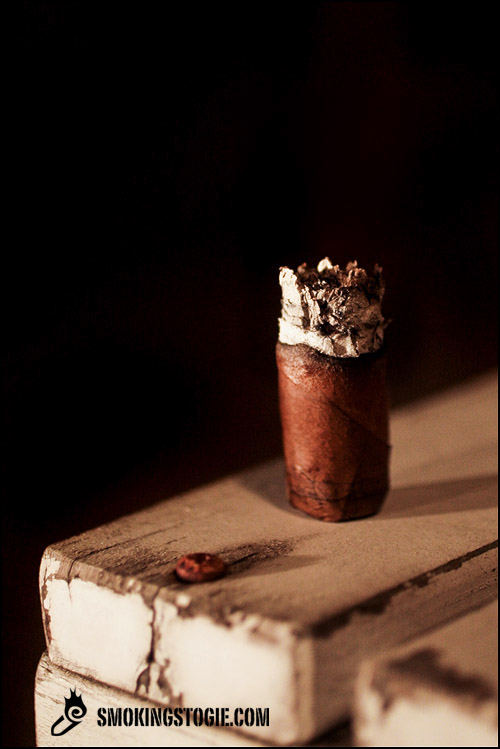 I was not expecting this cigar to be very strong. And while being mild is not in itself a bad thing, being mild, boring, and almost totally one dimensional is, and for the most part, that is how this cigar remained for its much too long length. Sadly, not even the refined smoothness of the tobacco or the great burn and draw could save it. Not a horrible or unsmokeable cigar by any means, but considering the purpose of the stick and the fact that it is a different blend from the regular OpusX, it was definitely one I was hoping to get more complexity out of.