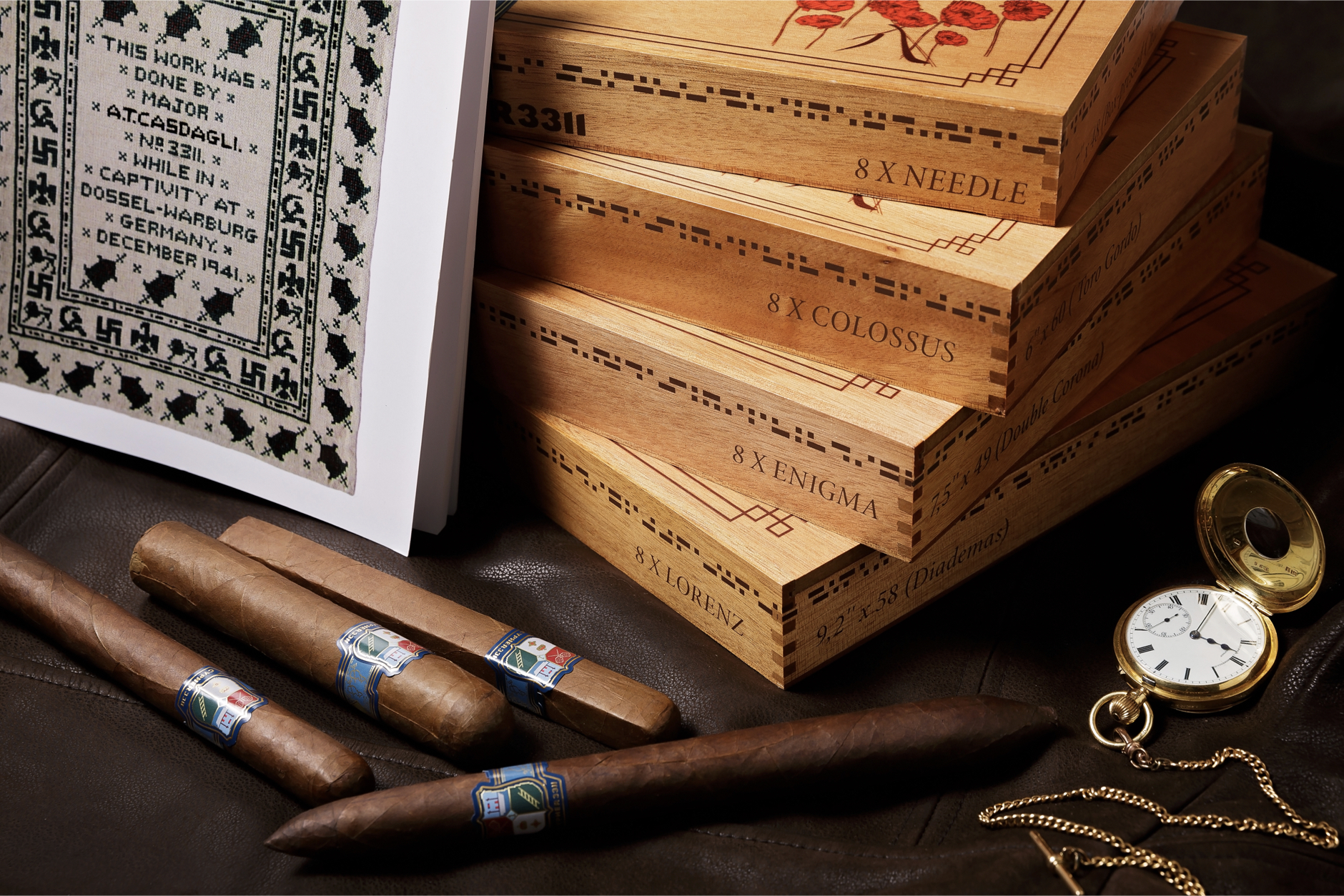 Next month, Casdagli Cigars will release its most premium line to date in the form of Cypher 3311.

The line is not named after some sort of cyberpunk future, rather, it’s a reference to World War II, specifically Major A. T. Casdagli, grandfather of Casdagli Cigars’ founder Jeremy Casdagli. As for the cigars, like other Casdagli lines, there are multiple blends within the four vitolas that make up the line. 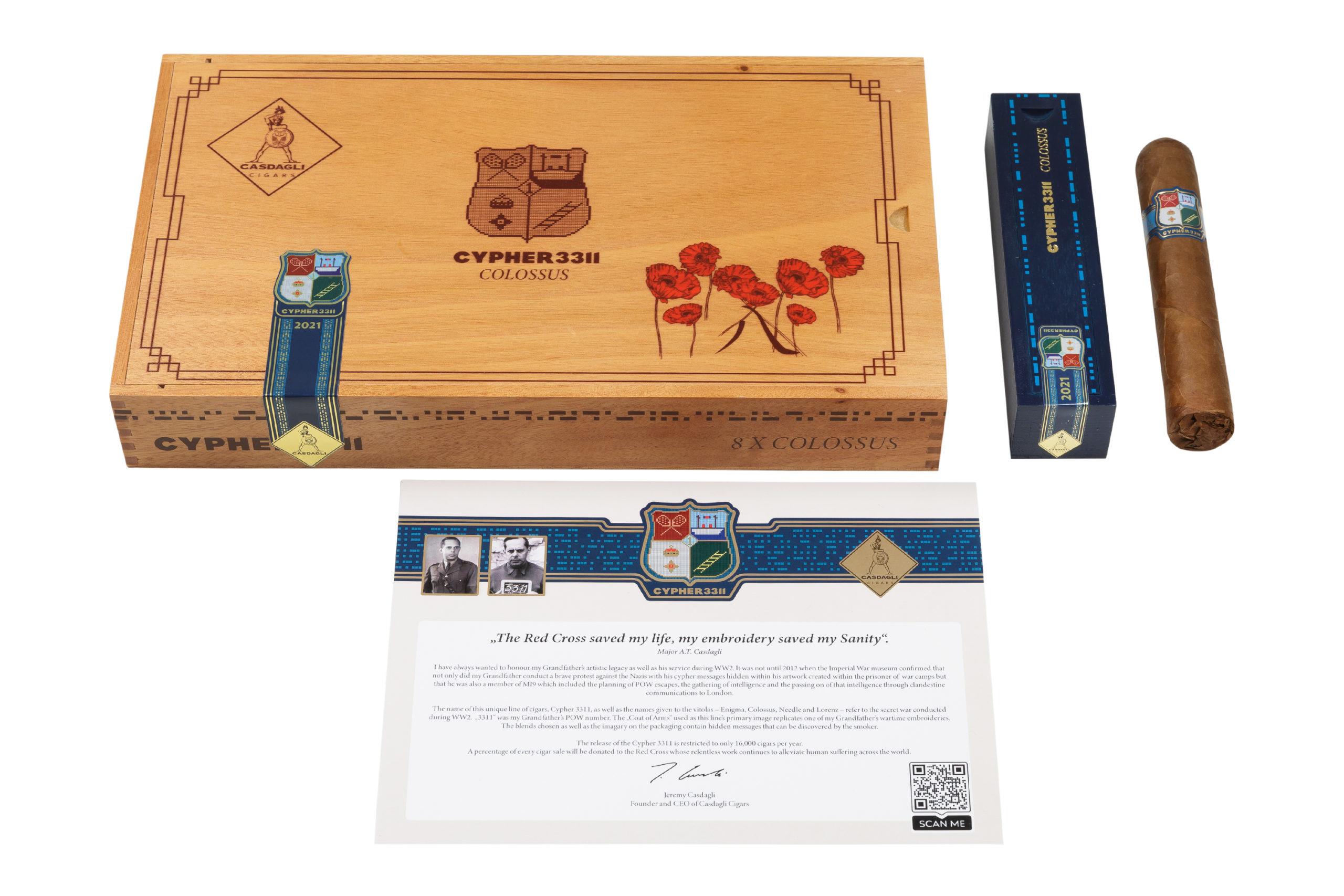 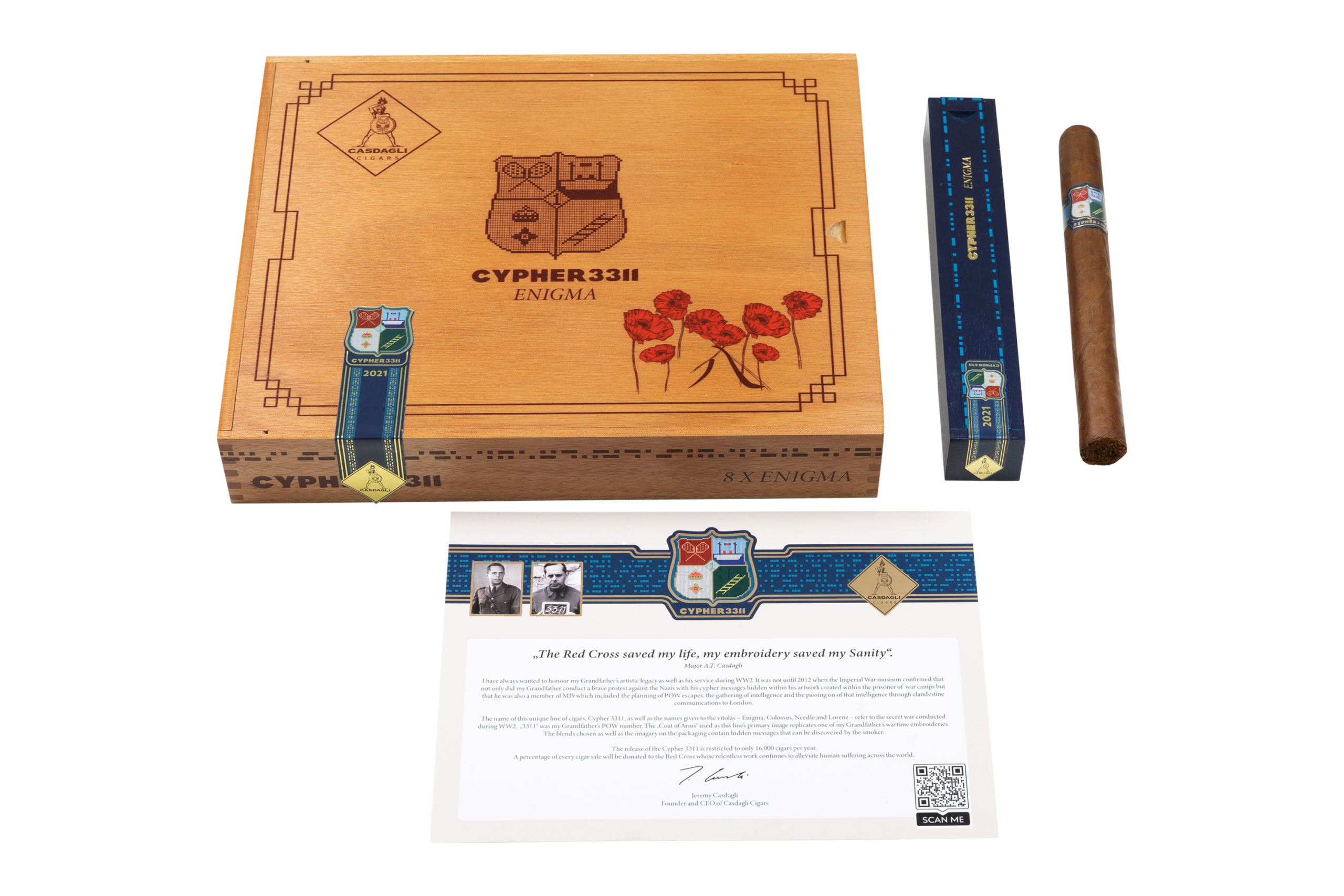 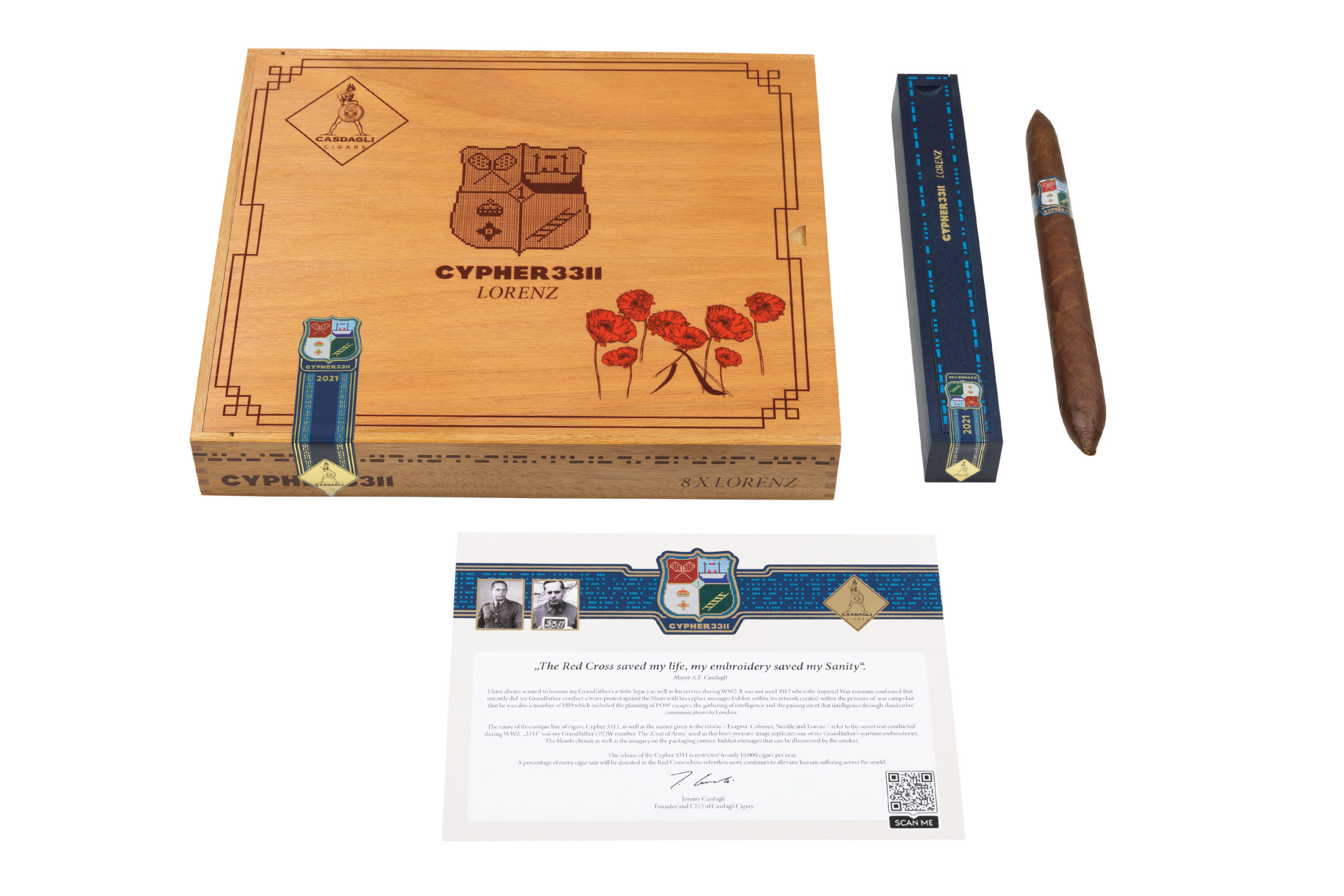 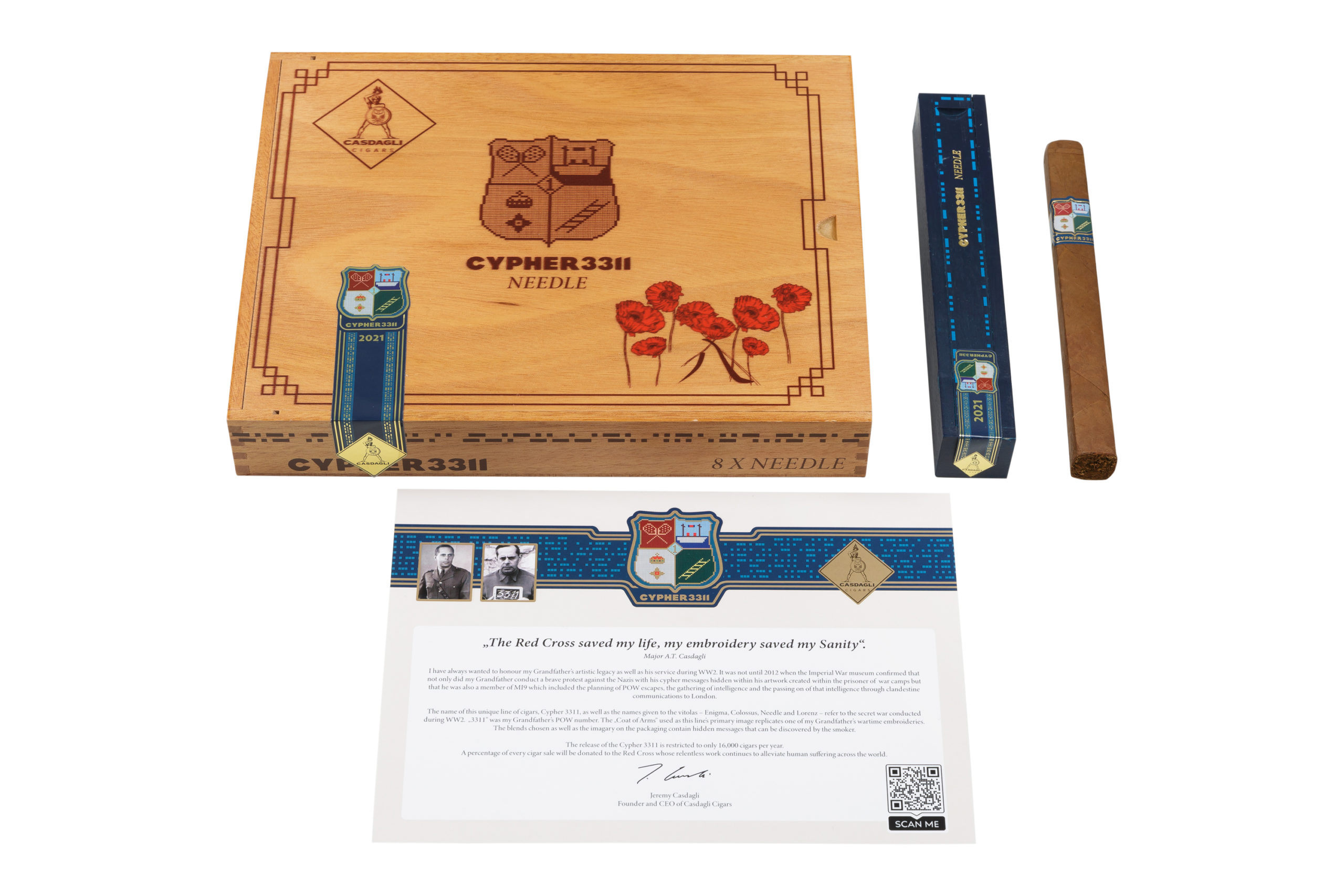 All four cigars are listed as using Ecuadorian wrappers. The Needle size, which is box-pressed, and the Colussus are listed as having an Ecuadorian binder over fillers from the Dominican Republic, Peru and an undisclosed country. None of the rest of the blends for the Enigma and Lorenz vitolas are disclosed. Each cigar is packed in individual coffins.

IGM Cigars in Costa Rica is producing the Enigma 3311 line, which Casdagli says should head to stores next month.

The 3311 part of the name is the POW number that was given to Casdagli. As for the cypher part, it’s a reference to Casdagli’s practice of stitching hidden messages into various pieces of artwork that he created while he was captured. The boxes pay tribute to this fact with hidden messages placed within the boxes themselves.

“I have always wanted to honour my Grandfather’s artistic legacy as well as his service during WW2,” said Jeremy Casdagli in a press release. “It was not until 2012 when the Imperial War museum confirmed that not only did my Grandfather conduct a brave protest against the Nazis with his cypher messages hidden within his artwork created within the war prisoner camps but that he was also a member of MI9 which included the planning of POW escapes, the gathering of intelligence and the passing on of that intelligence through clandestine communications to London.” 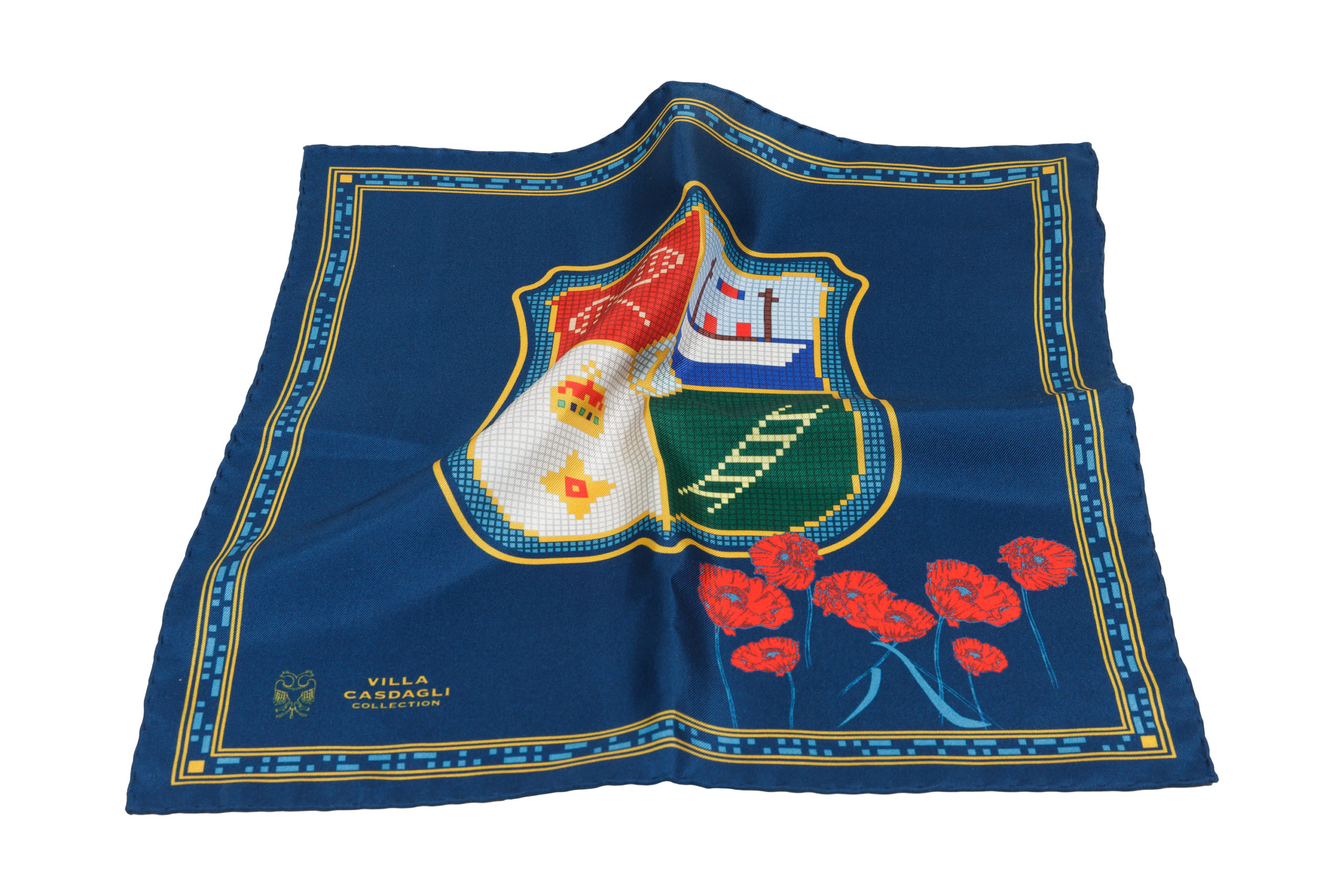 In addition to the cigars, the company will republish “A Stitch in Time. God save the King – Fu*k Hitler!,” a book written by Jeremy’s father about his grandfather’s time during World War II. The company is also selling a pocket square that contains the coat of arms for the line, which is inspired by Casdagli’s various war embroideries.

Casdagli Cigars says a portion of sales of Cypher 3311 will be donated to the Red Cross. This year’s production is limited to 8,000 cigars.