In late 2011, CAO released an exclusive blend commemorating a regular patron of Washington D.C. based retailer W. Curtis Draper who had recently passed away. The CAO Hans Huber Conmemorativo was released at 2011 Little Puff Recovery Lunch. Hans Huber, who the cigar was made from liked the CAO eXtreme, so the company used that as a base for the special edition.

While no exact release numbers were available, representatives of W. Curtis Draper estimated there were between 100 and 300 boxes of 25 sold, with each box retailing for $193.75. In addition, one dollar from the sale of each cigar was given to The House of Ruth charity, which Huber supported. The charity was also special to Huber based on the fact that he and his wife Christine first met at a function put on by the charity.

The original CAO eXtreme blend was introduced in 2000, one of the three part L’Anniversaire trilogy, which also included a maduro and Cameroon release. Originally produced at Tabacalera Perdomo S.A. in Nicaragua, the eXtreme was described as a full-body blend and was discontinued in early 2008.

The CAO blog has some info on the Hans Huber release and blend:

The following day we were lucky to sponsor the “Recovery Lunch” where we unveiled a special cigar for one of their patrons who tragically passed away – Hans Huber.  A portion of the proceeds for this very limited cigar will go to a charity that Hans was involved with called The House of Ruth.  If you are at Draper’s in the near future, please pick one up and experience a revamp of one of Hans’ favorite blends, the CAO Extreme. A silky smooth, cinnamon brown-colored wrapper adorns the CAO Hans Huber and there is a bit of oil present as well. A very slight box press is noticeable and the aroma coming from the wrapper is a combination of strong barnyard, nuts, chocolate and coffee. Resistance when squeezed is close to ideal with just a tad bit of sponginess. The cold draw brings some surprising bright citrus notes, along with a small amount of white pepper.

The first third of the CAO Hans Huber Commemorativo begins with a strong creamy nutty note at the forefront, along with other flavors of leather, bitter espresso, cedar and earth. I can detect a little white pepper on the retrohale every once in a while that seems to get stronger as the cigar burns down. There is no sweetness that I can taste for the first 15 puffs or so, but it starts to build slowly after that point. Smoke production is well above average so far, and both the burn and draw are performing very nicely through the first third. Strength-wise, the CAO has trouble getting out of the mild category by the end of the first third, although I don’t think it will remain that way. 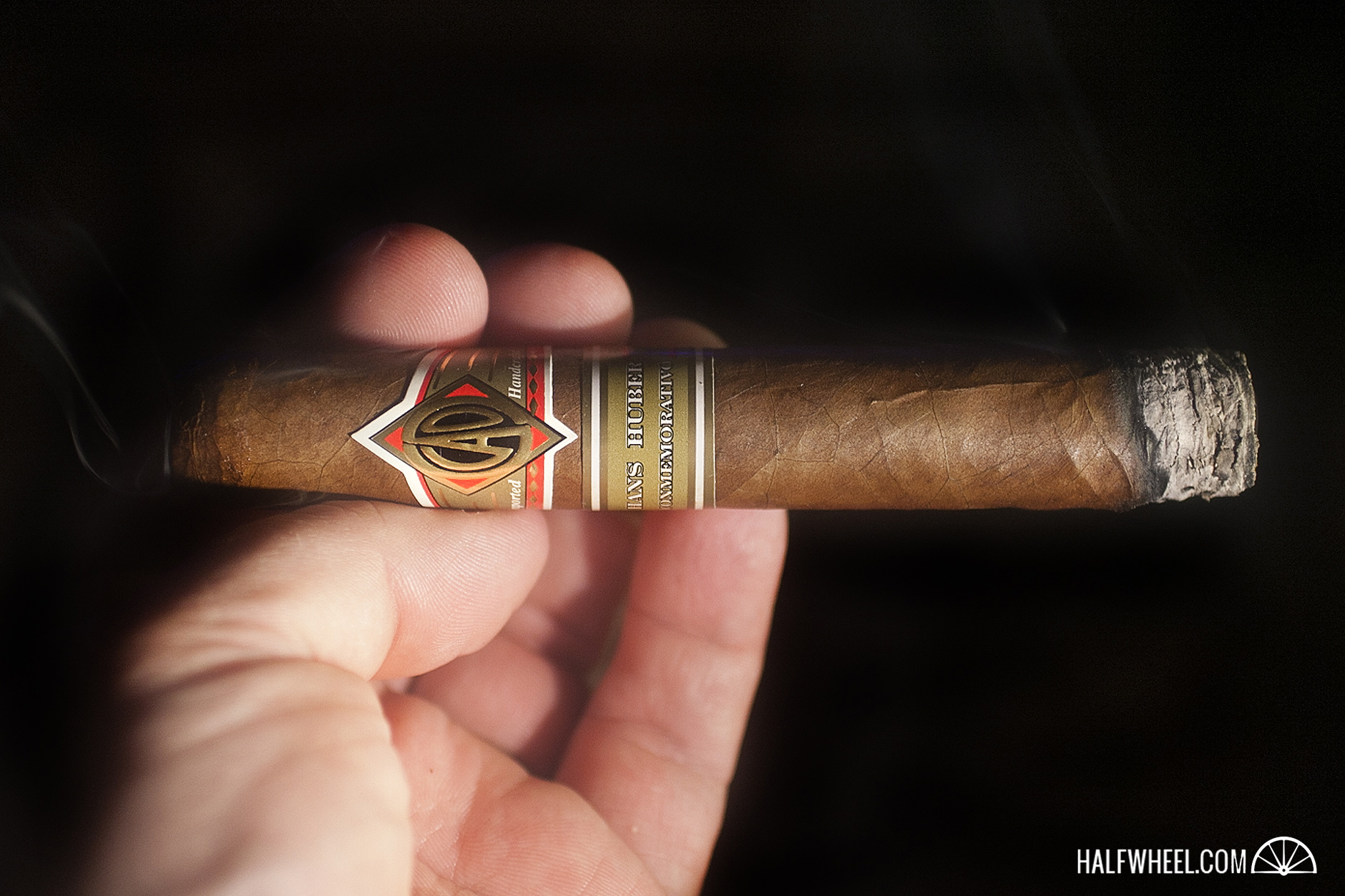 Coming into the second third, and the CAO Hans Huber Commemorativo begins much the same as the first third, but at about the halfway point, the main flavor shifts from the creamy nutty flavor to more of a leather note, along with earth, bitter chocolate, barnyard and cedar. The sweetness from the first third continues to build, and it has become distinct enough that I can identify it as a mild honey note. Construction-wise, both the burn and draw continue to be fine, and the smoke production has actually picked up noticeably as well. As expected, the strength has increased somewhat out of the mild category, but still fails to crack the medium mark by the end of the second third. Unfortunately, the profile of the CAO Hans Huber Conmemorativo changes very little in the in the final third, with the same dominant leather flavor taking the top spot, along with other notes of earth, nuts, cedar and barnyard. The honey sweetness is long gone by this point, although there is a bit more white pepper on the retrohale than the middle third had. The strength stalls out completely, and while it comes close to the medium mark, it ultimately never makes it across. While the burn and draw are fine until the end of the cigar and I am able to smoke it down to less than an inch left, the nub does get a bit hot and bitter that that point. 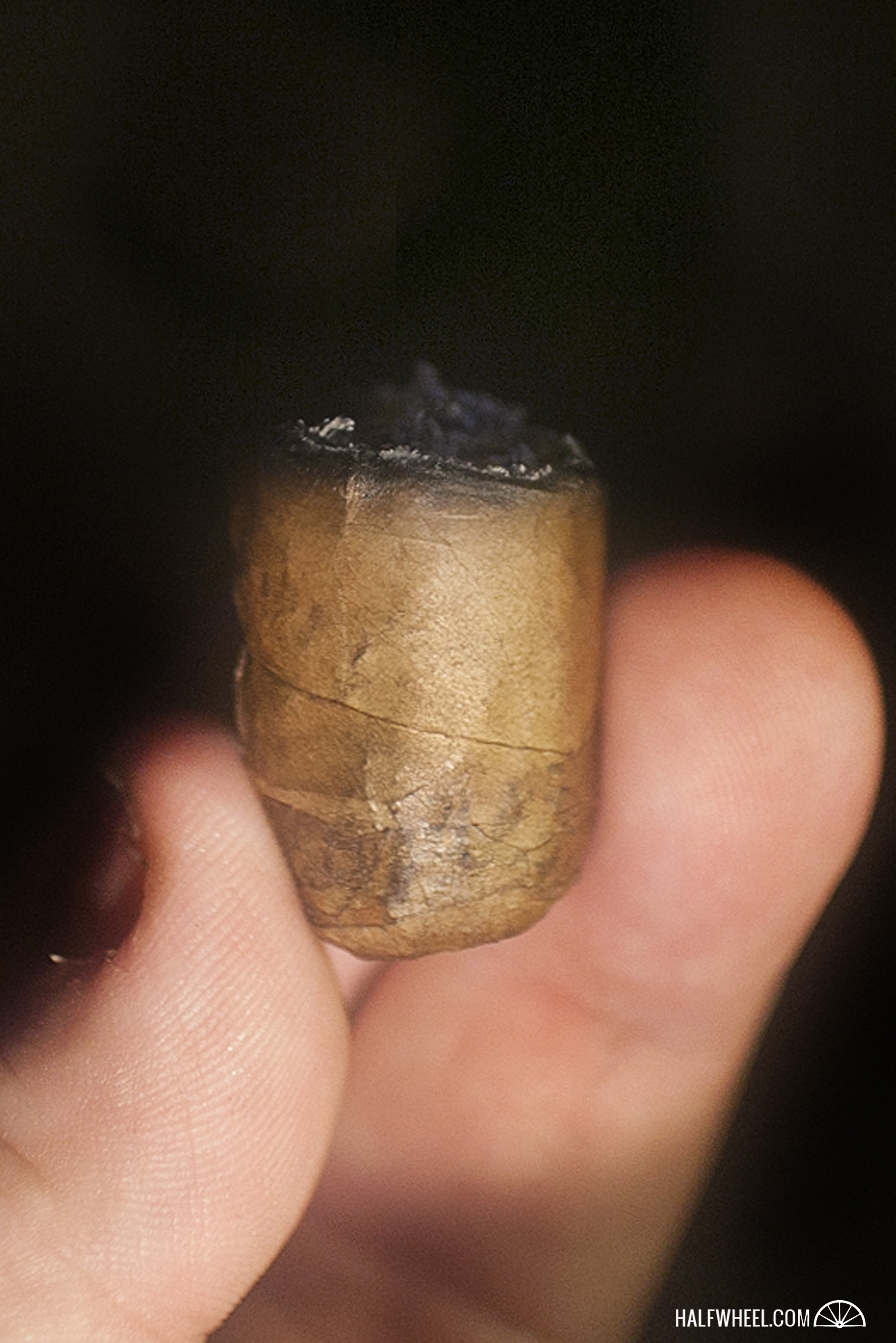 If there was a few words I would use to describe the CAO Hans Huber Commemorativo release, it would be: smooth and inoffensive. The profile is easy to smoke and would make a good first cigar of the day, but there is nothing really distinct or overly memorable about anything that I tasted at this point in the blend's life. In addition, it is not even close to as strong as I expected it to be considering the eXtreme blend that the cigar is modeled after, and actually ended up being significantly below the medium mark. As a tribute release, it is an excellent idea and presentation, but as a blend, it is just not overly exciting.