In July, Davidoff of Geneva USA announced it would soon be shipping a brand new release named Camacho Nicaragua, which—contrary to what its moniker implies—is actually blended from a combination of tobaccos hailing from four different countries and not rolled in Nicaragua. Specifically, the blend includes a wrapper grown in Ecuador, a binder sourced from Honduras and filler tobaccos from the Dominican Republic, Honduras and Nicaragua.

“Camacho Nicaragua is for the cigar smoker who seeks distinctive Nicaragua flavor,” said Lana Fraser, head of marketing for Davidoff Americas, in a press release. “This series was created to add depth to our Camacho Core portfolio to appeal to a wider-range of consumers’ tastes. Although bold, the blend is balanced and remarkably flavorful. In addition to Nicaraguan tobacco, tobacco from Ecuador, Honduras and Dominican Republic are also found in this blend adding depth and character.”

There are three different vitolas in the Camacho Nicaragua line. 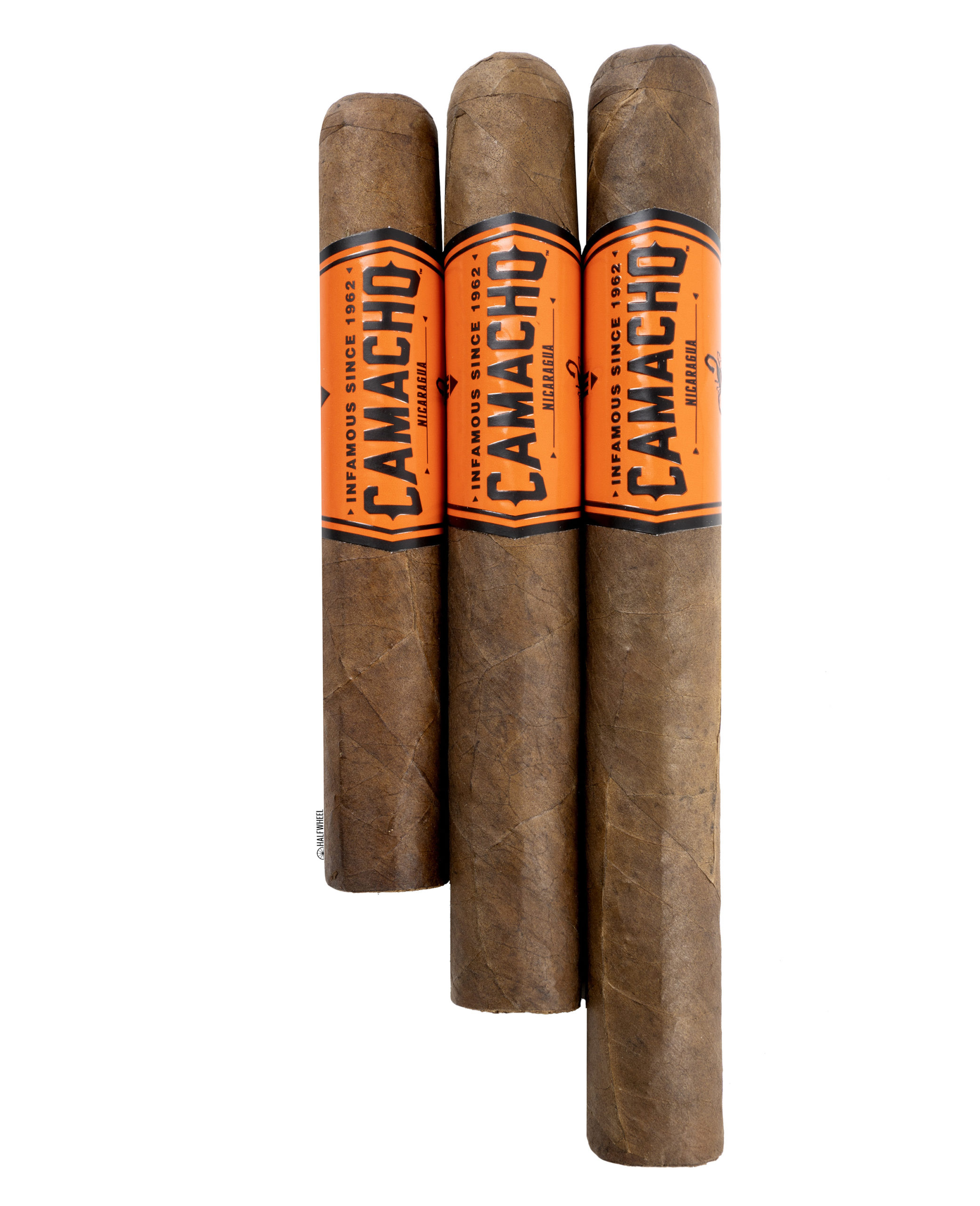 As with most Camacho cigars, the Camacho Nicaragua is being rolled at the Diadema Cigars de Honduras S.A. factory located in Danlí, Honduras and started shipping to retailers on July 20. 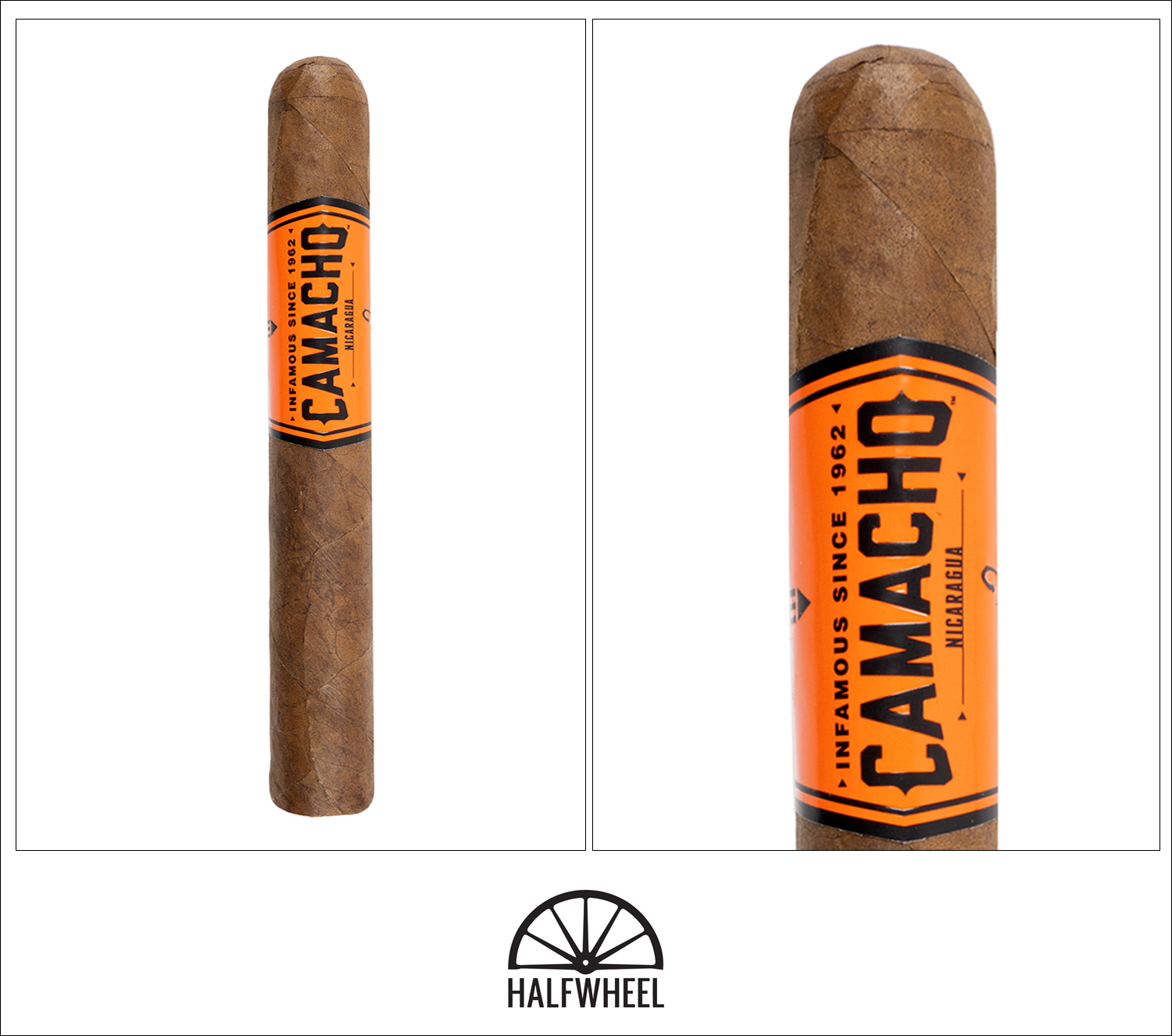 There are quite a few great things to like about the Camacho Nicaragua Toro from a visual perspective including a gorgeous milk chocolate brown wrapper that is silky smooth to the touch, although it features very little obvious oils. The cigar is extremely dense when held in my hand and there are a number of significant veins running up and down the length as well. Aroma from the wrapper is a combination of sweet oak, earth, leather, hay, barnyard, cocoa nibs and strong raisin sweetness, while the cold draw brings flavors of dark chocolate, hay, oak, vegetal, cashews, black pepper and a large amount of sweet raisins.

There is a significant amount of both spice on my lips and black pepper on the palate immediately after lighting the foot, although both do begin to die down very quickly. In terms of profile, the Camacho Nicaragua features a distinct combination of creamy oak and leather tack as the dominant flavors, followed by lesser notes of salted cashews, barnyard, hay, baker’s spices, cocoa nibs and a touch of orange rind that brings up the rear. There is a nice amount of raisin sweetness seemingly pulled over from the cold draw as well as a fairly large amount of black pepper on the retrohale. The finish is full of rich but bitter espresso. Construction-wise, the draw provides me an almost perfect amount of resistance after a straight cut, while the burn is excellent. There is an above-average amount of dense, white smoke flowing off of the foot, and although the overall strength noticeably increases progressively, it is still well short of medium by the time the first third comes to an end. 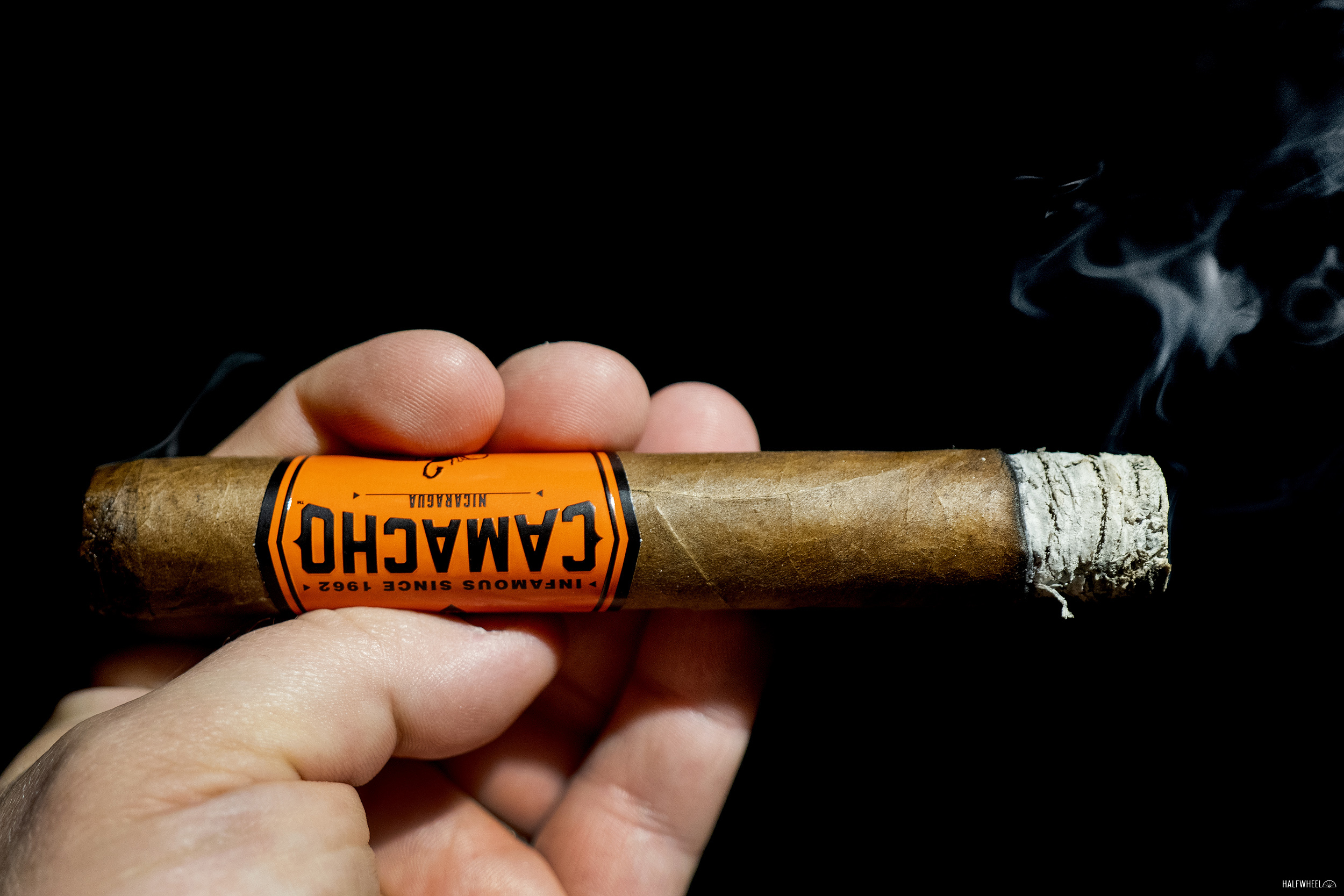 Some major changes in the profile define the second third of the Camacho Nicaragua Toro. It starts with the dominant flavors which morph into a combination of creamy cashews and earth, with secondary notes of aged oak, leather, citrus, barnyard, hay and a tiny amount of floral flirting in and out. On the retrohale, both the raisin sweetness and black pepper decrease in strength just a bit while the spice that was present on my lips almost disappears by the halfway point, but the espresso bitterness on the finish has actually increased in strength enough to cause issues with the overall balance, at least for a few puffs. In terms of construction, the draw continues to give me no issues, and although the burn has to be touched up once, it has no problems after that. Strength-wise, the Camacho increases enough to easily hit a point very close to the medium mark by the end of the second third, although it seems to have stalled out there. 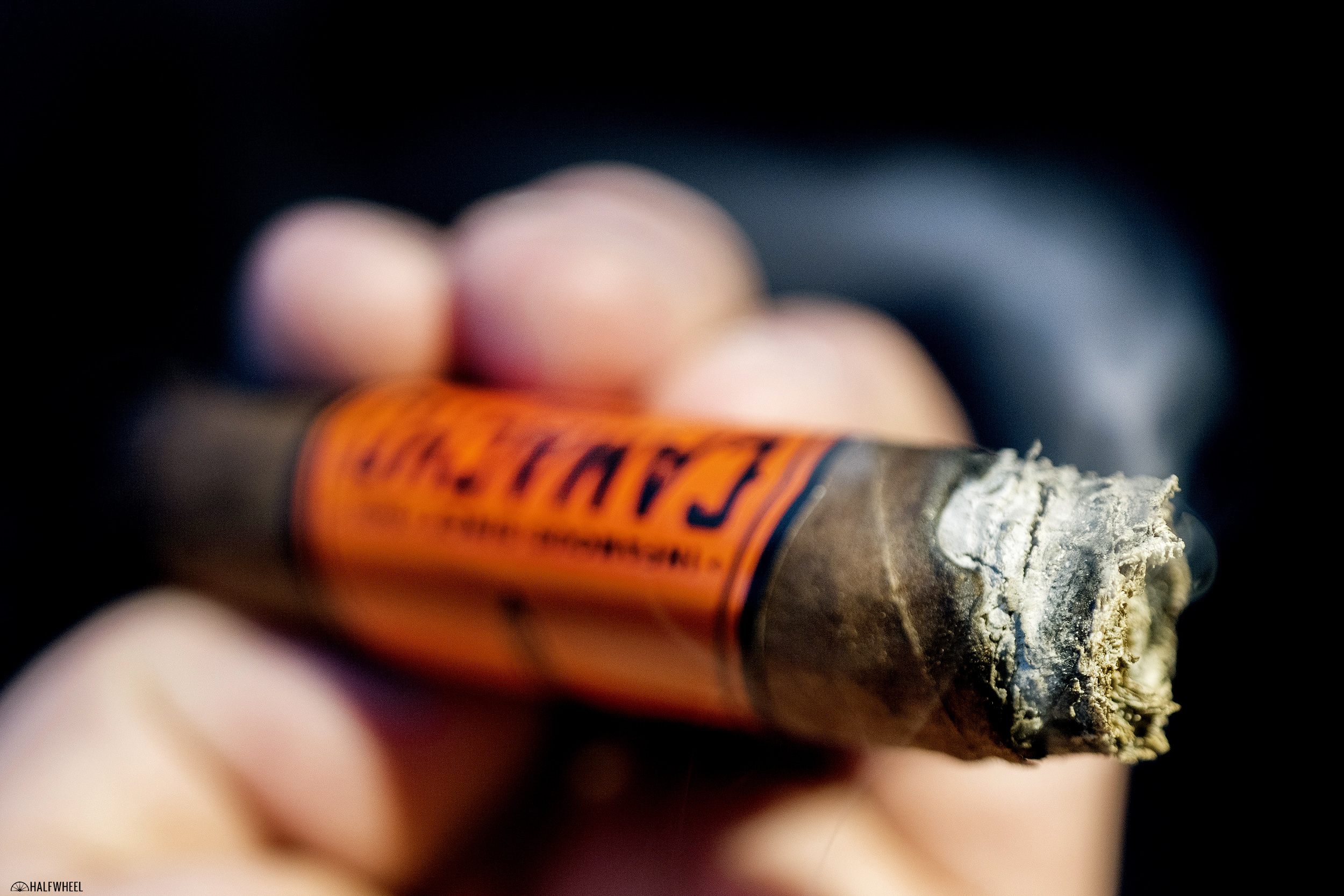 The raisin sweetness that is present on the Camacho’s retrohale changes completely in the final third to a grainy brown sugar note that combines well not only with the black pepper that remains on the retrohale but also with a new dominant flavor of rich dark chocolate. Additional notes of generic nuts, earth, hay, cinnamon, leather, barnyard and a lingering orange citrus show up in various amounts. Both the spice on my lips and espresso bitterness almost totally dissipate but they still remain a lesser part of the profile until the end of the cigar. The burn evens up nicely and gives me no issues after that while the draw continues to be excellent and the smoke production remains well above average. Finally, the overall strength increases slightly compared to the second third to land just under the medium mark and I put the nub down with a bit less than an inch remaining. 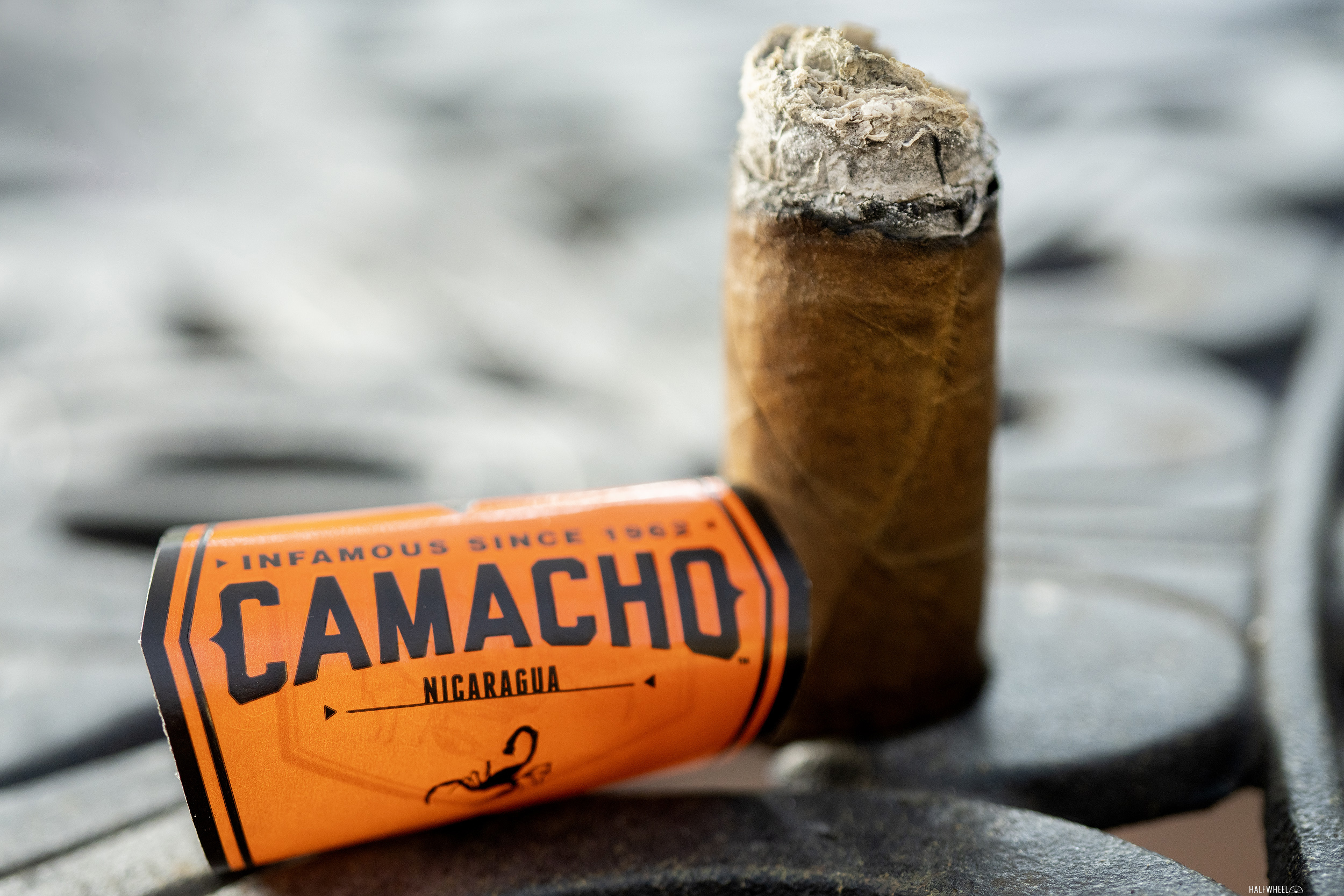 My issue with the naming aside, the Camacho Nicaragua is quite enjoyable, albeit with fewer characteristics of the county it was named after than most people will probably expect. As is the case with the Camacho Nicaraguan Barrel Aged, the blend is creamy and sweet, but with a bit more bite on the finish thanks to a pervasive espresso bitterness. In two out of the three of the cigars, that note that creates some balance issues. Construction across all three samples was excellent in just about every regard other than two quick touchups in the second third on two separate samples. In the end, Camacho can call the Camacho Nicaragua any name it pleases, but I will call it a very good cigar.