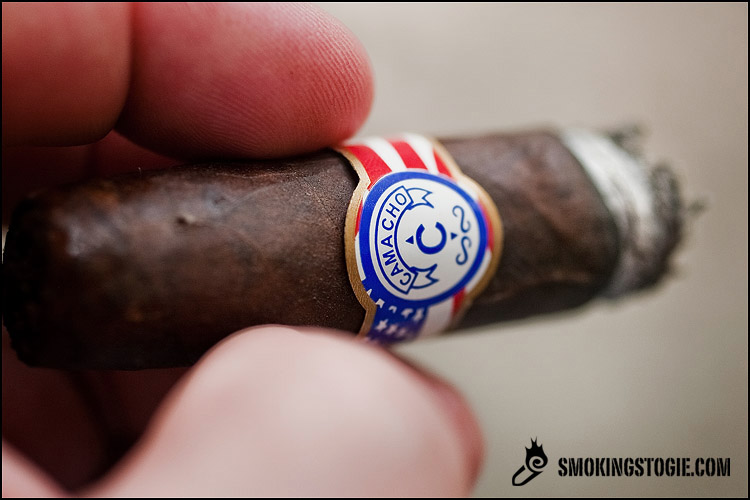 In July of 2002, the Eiroa family, owners of Camacho cigars, released a Honduran cigar to celebrate the freedom they had found in America. This specific cigar came to be known as the Camacho Liberty Series.

The original 2002 Liberty had a production run of only 25,000 cigars and included 5,000 cigars of each of these five vitolas: Corona, Rothschild, Toro, Torpedo, and Churchill. The original release in 2002 was the only year five different vitolas were released, and only one other year in the series had more than one vitola, the 2005 Liberty, which is what I am reviewing today.

Only 40,000 2005 Liberties were released. Each cigar is also individually enclosed in their own flag labeled coffin and wrapped in tissue paper as well, but I had to take that off to shoot the photo so you all could see the actual cigar. The cigar I smoked for this specific review was #14,222/40,00 according to the label. The Camacho Liberty 2005 was rolled using only the top leaves (top primings) of the Corojo harvest, which are subjected to more stress and yield a more intense and full flavor. It also supposedly includes an unspecified amount of pre-embargo Cuban tobaccos cultivated in 1961.

The cigar itself has an extremely dark brown smooth to the touch wrapper, not black, but pretty close. It is an impressive looking cigar. The band is simple, but effective. It is extremely firm when squeezed, and the wrapper smells like chocolate, pepper and tobacco.

The first third starts out with a small amount of spice and a very earthy profile. While the earth was dominant, there was some leather and a tiny flavor of tobacco present as well. A nice, albeit fairly mild, start. The second third has almost an explosion of flavor, especially right after the hump, with notes of sweet coffee, leather and chocolate with just a tad bit of spice thrown in. Even though I was waiting for it, as I said, I love the 11/18 vitola, I was still surprised by the about face that took place.

The final third was basically the same as the second third, which is not a bad thing at all, with just a bit more spice on the tongue. While it did get a bit hot at the end, it was still a great ending to the cigar. I will be honest and say that I have not been impressed with quite a few of the cigars that Camacho produces, even some other years in the Liberty Series, but this cigar was a keeper. It was complex, easy to smoke, and the flavors kept changing over the course of the cigar. Just a wonderful, well-constructed, nice-looking, great tasting cigar.