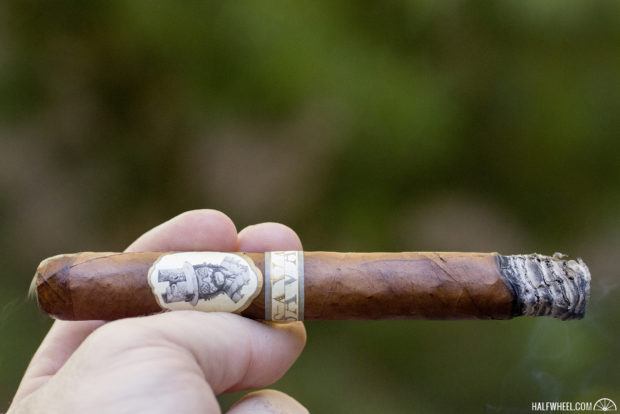 Upon first glance at the Caldwell Savages, it’s not immediately apparent that the cigar is an offshoot of the company’s Long Live the King line, but that’s exactly from where the cigar traces its roots.

Long Live the King debuted as one of the company’s original lines in February 2014, a cigar that uses a Dominican wrapper and binder, while the filler comes from the Dominican Republic and Nicaragua. Two years later, it was time for the line to offer its first extension.

Robert Caldwell said little about just what changes were made to the cigar, disclosing only that the cigar wears a habano wrapper. He released it at the 2016 IPCPR Convention & Trade Show, offering it only to existing Caldwell accounts and only on the first day of the show, selling out of what supply he had.

Gone too was the original artwork of a young child wearing an oversized crown bearing the title KING on the front. In its place was artwork by the Italian artist PixelPancho depicting a  bespectacled, Steampunk-inspired man both on the front of the box and the primary band of the cigar. A secondary band bearing the word SAVAGES was added as well, though split in half and offset, half in gold and half in silver.

Savages was released in five sizes, all in 10-count boxes:

Here’s what I said about the Caldwell Savages Corona Extra when I reviewed it in October 2016: 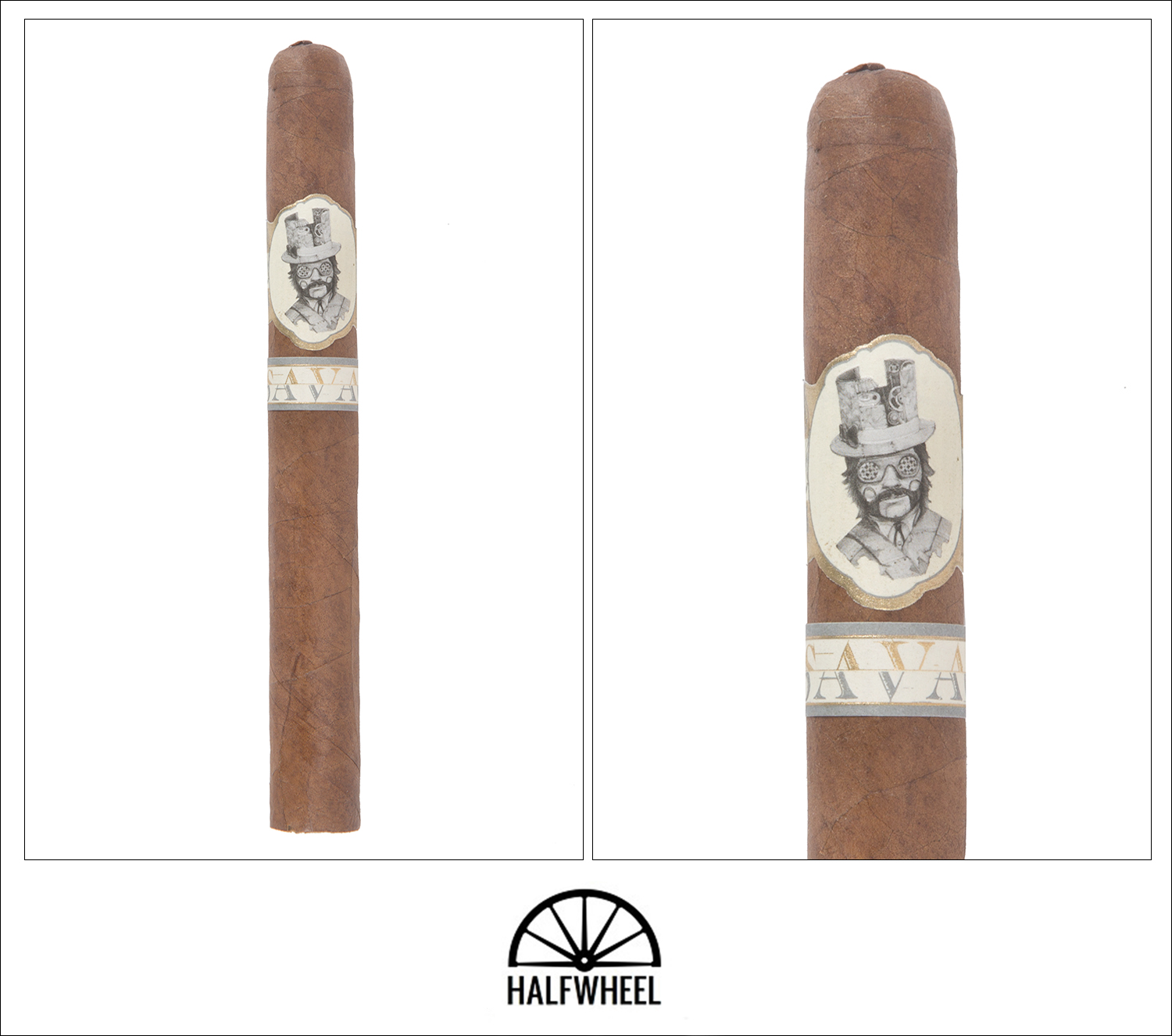 For having sat largely untouched in my redux humidor since this review, the Caldwell Savages Corona Extra looks pretty good. The foot has a small chip in the wrapper, but I can’t recall if it went in the box like that or it happened since it has been in my possession, but it’s a minor issue at best. The cigar is still on the oily side, with a sheen still making the dark brown and somewhat mottled wrapper glisten. While the seams are visible, the cigar looks to have been rolled well with uniform firmness that shows just a bit of give. I still feel like the pigtail cap doesn’t get its proper due, as it is both small and pressed nearly flat against the head of the cigar. The foot of the cigar is rich and smooth, offering a subtle mix of bark and soil, while a very faint suggestion at Tia Maria brings in a bit of complexity while omitting the outright sweetness. There is a bit of pepper to be found, though it’s faint and only reveals itself after a few sniffs. The cold draw is near ideal as far as airflow, and it too is on the smooth and mellow side, with a bit more bark, less earth, and hints of chocolate and coffee beans.

The first puffs of the Caldwell Savages Corona Extra pick up right where the aroma and flavors left off before being lit. While there’s more of the bark, potting soil, chocolate and pepper, I find myself most preoccupied by trying to identify what is giving the cigar a bit of an aperitif characteristic, and by that a bit of sweetness as well. While my memory of such drinks is far from encyclopedic, I keep getting drawn back to Tia Maria or Kahlua given their coffee-based nature. Regardless of the specific flavors, the cigar is incredibly smooth, balanced and complex, and so far has shown none of the burn issues it had when I first smoked it; if anything it’s almost smoking a bit quicker than expected. The first bit of dark grey ash drops off unexpectedly, and with it seems to go some of the sweetness and whatever was giving the cigar its spirituous characteristic, though a bit hangs around on the finish. My first retrohale comes shortly thereafter, a bit of a delay given that I had primarily been focusing on the flavors, and I’m immediately regretting taking so long as the aromas are just as good, with a very refined pepper and a stew of a base flavor that echoes much of what the tongue is getting. The burn, draw and smoke production have all been nearly flawless. 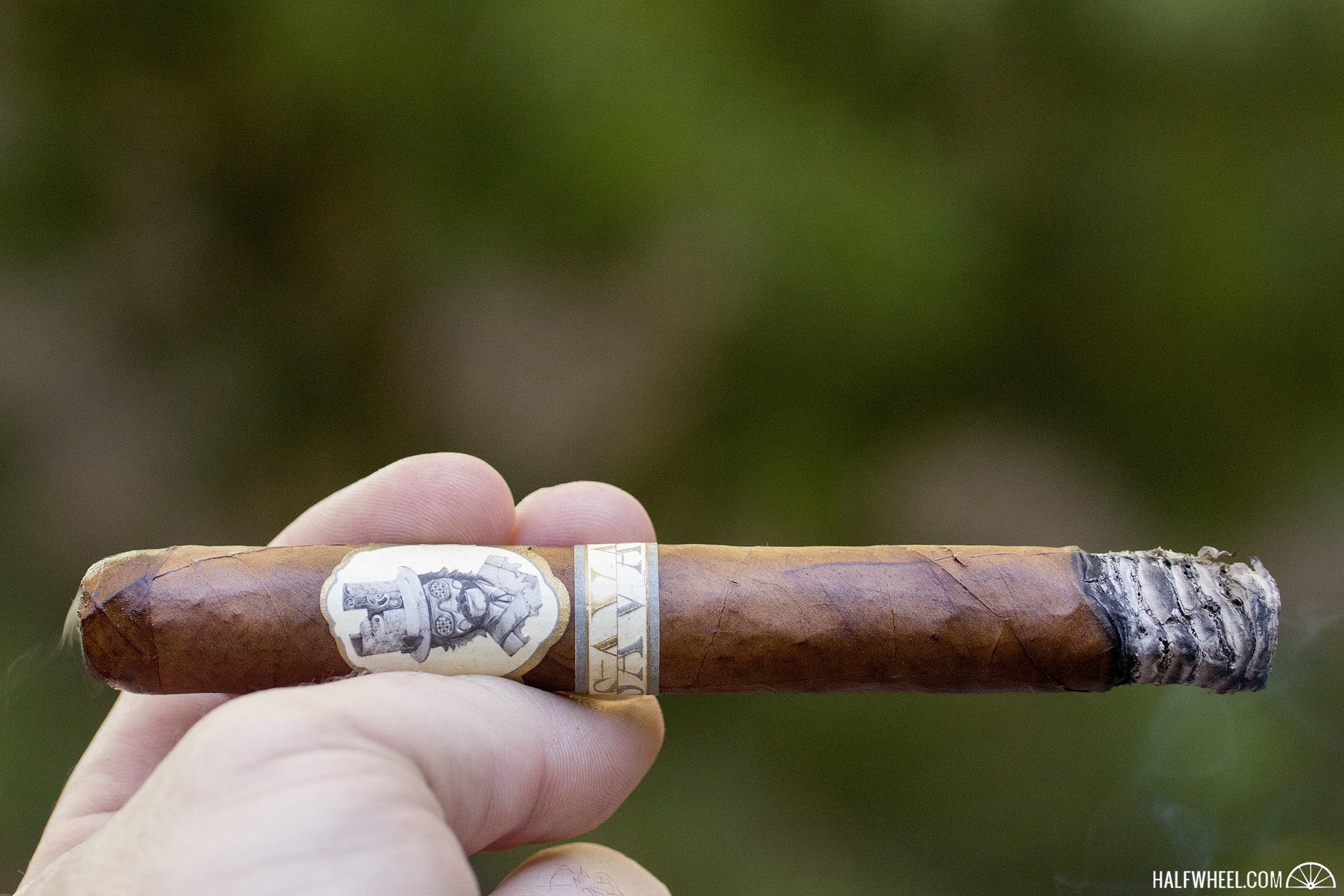 While I thought there were some changes thing place with the flavors at the end of the first half, the start of the second half makes that point abundantly clear. The Tia Maria/Kahlua note is almost completely gone, with thick brownie chocolate now providing what the cigar has to offer in sweetness. Pepper is also largely diminished, replaced by a bit of a rocky earth that leaves a tingling sensation in the middle of the tongue after each puff. Texture-wise, the cigar has thickened up into a dense chocolate brownie, and while the flavors were much more laid out I the early goings, they seem to have curled into a tight ball by the time the burn line crosses where the bands had been. It’s also where I get my first burn issues with the cigar, as it goes out once and needs a relight shortly thereafter to keep burning. The final inches have the flavor continuing to tighten up and individual flavors a bit more hesitant to step forward and be identified. Pepper is still present but it too is compact and quick on the senses. The smoke heats up quickly and noticeably in the final inch, bringing an abrupt end to the cigar and wrapping it up at about one hour and 40 minutes of very enjoyable smoking time.

When I smoked the Caldwell Savages Corona Gorda back in October 2016, I closed the review by saying that I was already looking forward to the redux of the cigar, and after some 20 months of rest, I'm glad I picked this up when I did. Other than a bit of a burn issue and the rapidly increasing heat in the final third, this cigar seems to have reached where it was destined to be: rich, complex, balanced, smooth and incredibly enjoyable. If you've got some in your humidor and they perform anything like the one I smoked, go grab one and smoke it right now. If you happen to find one—or more—on a store shelf, buy it without a second thought and smoke it with your full attention, as it has turned into a remarkably good cigar.