Over a year ago, Boveda, the company best known for its humidification product introduced a new item, acrylic humidors.

The company said the idea was to show off some of your most prized cigars while using Boveda’s excellent humidification system. It was offered in two sizes Small ($69.97) and Large ($197). Boveda rates the Small as capable of holding 20 robusto-size cigars, while the Large holds 75 robustos.

I’d been looking to review the product for some time, but I was reminded when Jorge Ahued of STOGIES World Class Cigars wanted to know if we’d be interesting in getting a customized version of the product. STOGIES has an on-site engraving machine and Jorge suggested that we get the halfwheel logo engraved onto the lid. It sounded like a good idea and a few days later a large box showed up with the humidor inside.

There’s five total pieces to what seems like a relatively simple design: the bottom shell, the inner ventilated piece that holds the cigars and sits in the shell, two dividers and a lid. I measured the usable dimensions a bit smaller than Boveda’s official descriptions. I measured 13 1/2 inches in width x 8 inches length and 2 3/8 inches to the top of the tray.

I should be clear, I measured the interior space within the tray itself, i.e. the usable space. Boveda’s website lists the unit as a bit larger on the inside, but those dimensions cannot be achieved unless you remove the tray itself. it’s still a usable product at that point, but you lose access to the dividers and your Boveda humidification solution won’t be as pretty.

The unit weighed in at 6.48 pounds total. 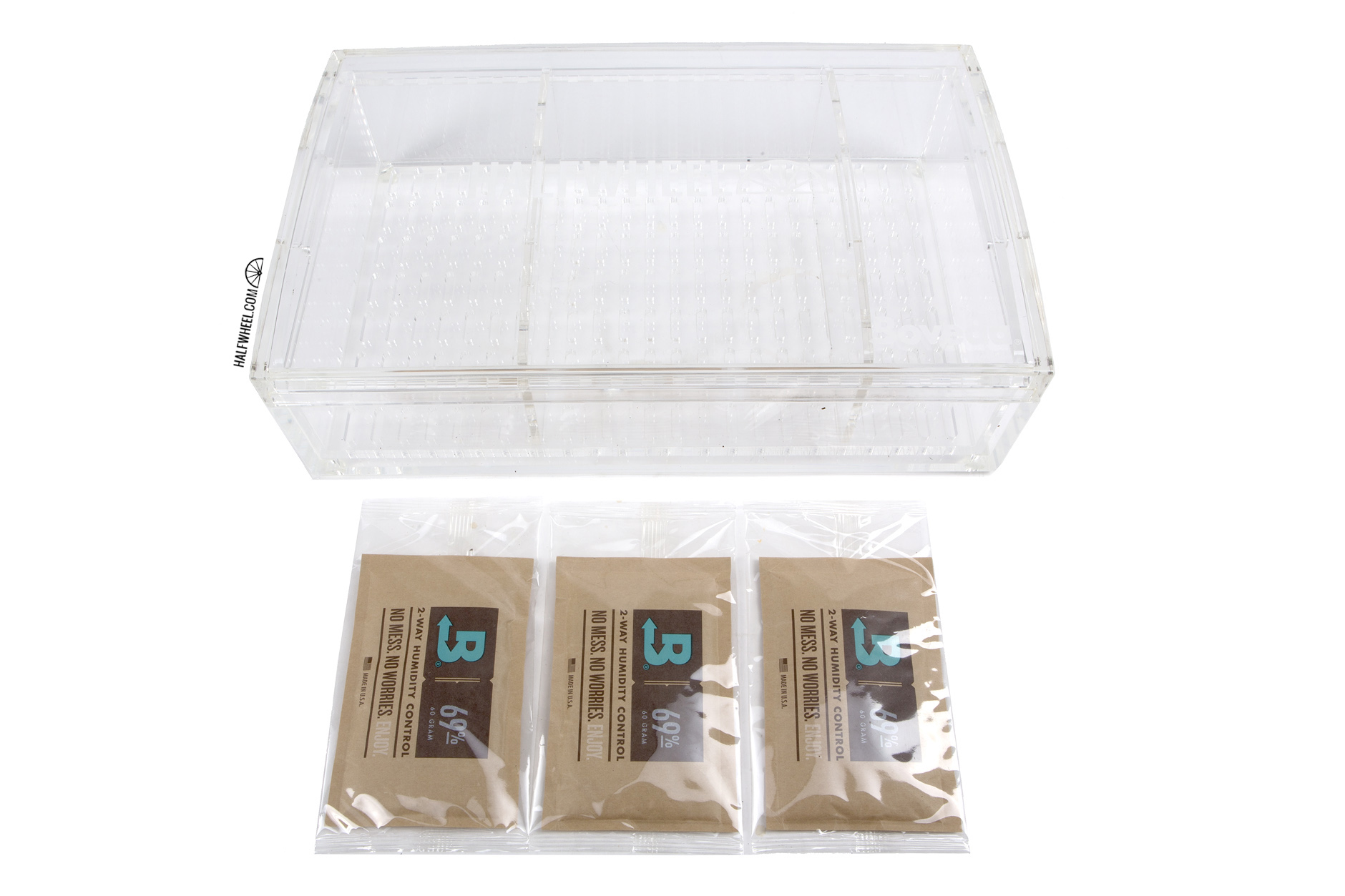 The beauty of not using cedar is that the humidor doesn’t need to be seasoned. To be a bit blunt, it’s a glorified Ziplock bag and as such maintenance is limited to replacing the Boveda packs when they dry out. The lid comes completely off and once placed back on the humidor it seals by locking around the interior pieces with the assistance of magnets at each corner. 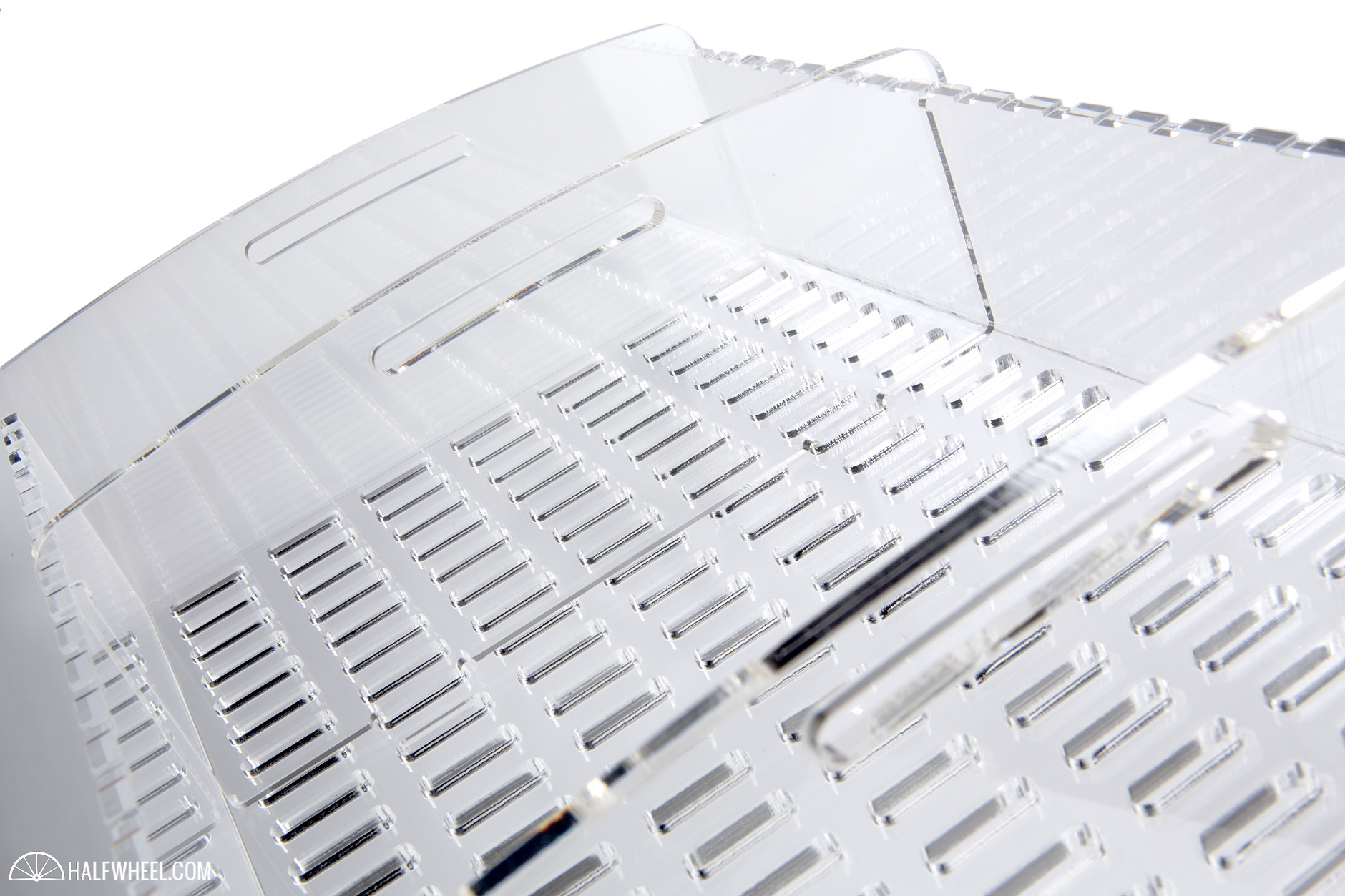 There are a total of 161 vent holes on the bottom. That information would be totally useless if all they were for is allowing the humidity to rise from the bottom of the unit, into the area where the cigars sit. However, they serve another purpose. The holes are laid out in a 23 x 7 formation and serve as the anchor for the two dividers. There’s 23 options, albeit only about 19—and that’s being generous—are usable positions.

The lid is curved slightly in the same manner as the handles on the side. Given the way most people are likely to store cigars, this likely won’t increase the storage capacity, although if you turn the cigars’ positioning 90 degrees, I suppose you might be able to fit a few extra cigars. As for capacity, I comfortably fit 60 cigars of all shapes and sizes. I’m sure 75 robustos would fit, and if you got really creative, you could probably fit more. 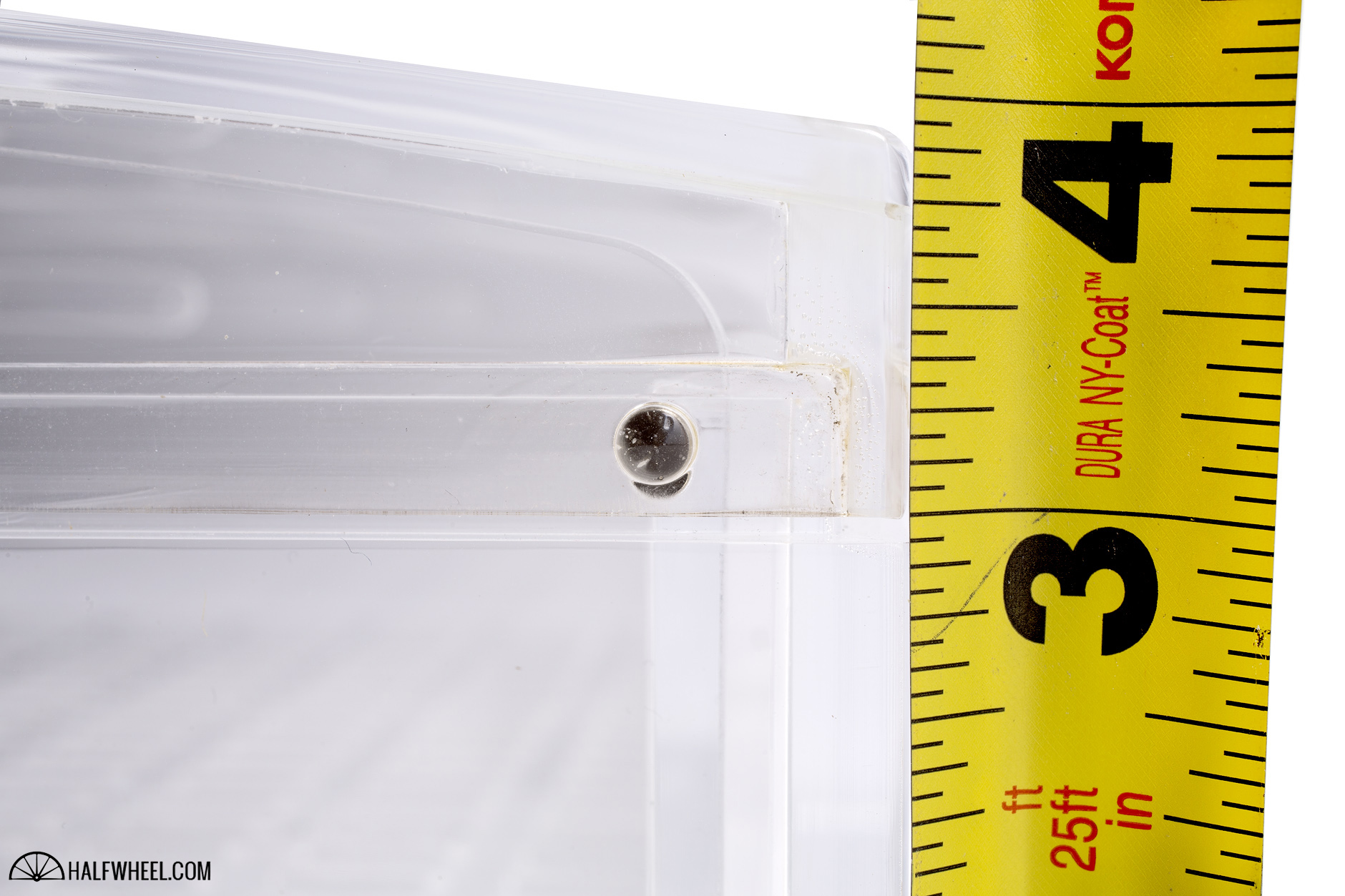 In terms of the seal, it worked fine for the three months I tested the humidor. However, it’s not perfect. One corner of the humidor does not line up flush with the rest of the humidor. It still is enough to get a fairly effective seal, but it’s also about 1/16th of an inch off under the best scenario. Depending on how I placed the lid—both direction and which side—the problem would be slightly worse. Once again, I’m not sure it would noticeably affect performance, but it’s a bit annoying for my OCD. 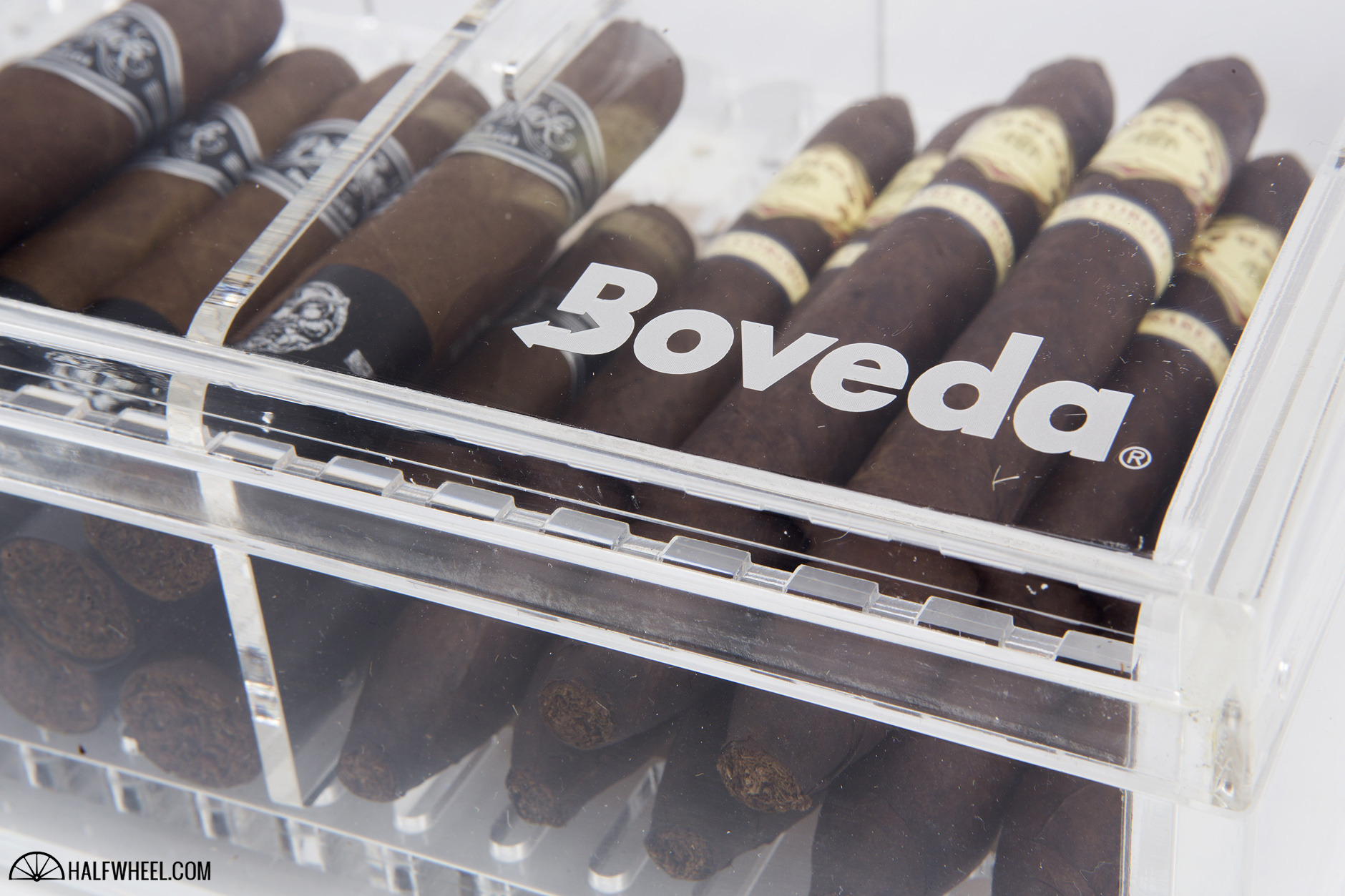 Boveda’s marketing description says the Acrylic Humidor is designed to show off your prized cigars and while I suppose one could do that, particularly with the smaller unit, I’m not sure I think that’s the best use. First of all, unless you have the same or similar banded cigars, it looks a bit messy. Secondly–and perhaps most concerning–I wouldn’t want to put my prized possessions—particularly ones I intended on storing for long periods of time—in a clear humidor. Sunlight is not great for cigars and while I don’t think there’s a conclusive opinion, excessive amounts of fluorescent light probably aren’t either. So unless the humidor goes in a dark, windowless place, I think it actually poses an additional risk—versus a traditional non-clear humidor—for cigars that will be stored for long periods.

It’s not to say that I think you need to put a blanket over the humidor. I certainly don’t intend on doing that with mine. But, for the cigars I want to age for years or decades, this isn’t the right option.

I do think the Boveda Large Acrylic Humidor has one very notable use. Last winter, I was in Reno, Nev. at FUMARE for the store’s annual pop-up event with Craft, a local liquor store. Ty Martin, Craft’s owner, wanted to know if there was a solution that would allow him to sell cigars that were stored with proper humidity, minimal maintenance and not run north of $1,000.

He didn’t have any intention of offering more than a couple cigars at a time and as such, even if he wanted to spend lots of money, the solutions aren’t great. Most options are some sort of retail-minded, glass front humidor that are probably not the best made options. For me, this is where the Boveda Large Acrlyic Humidor makes sense. Three humidors would cost $600 and allow someone like Ty to display up to nine different cigars at one time. They look pretty good behind a counter and the tray design means he could bring the cigars over to the customer without having to picking up the full 6 pound unit. 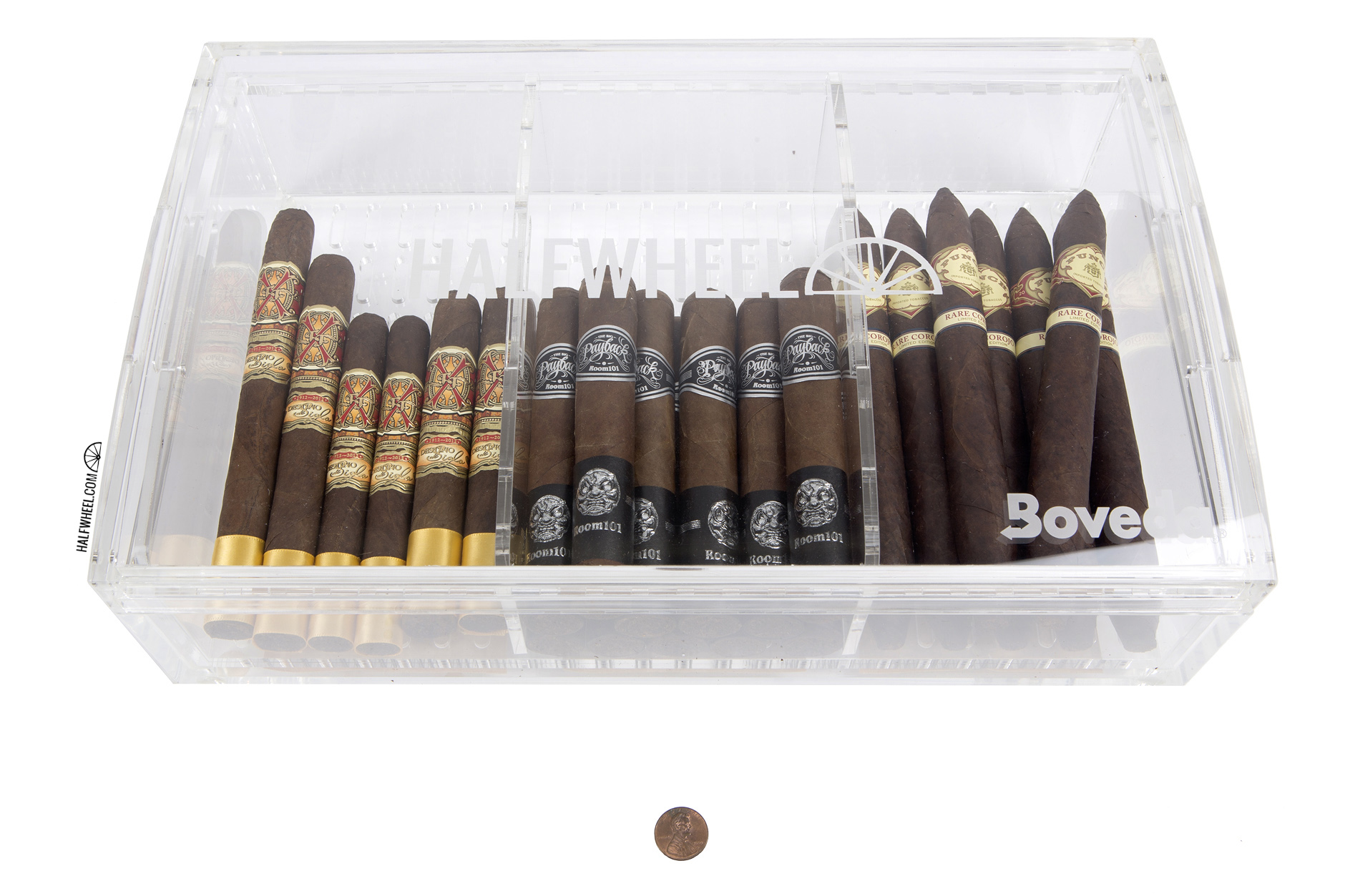 And that’s where I am with the Boveda Acrlyic Humidors. I think for certain retail settings, they are an amazing option. Compared to other sub-$200 humidors I’ve owned, the unit performs better, though some of the mid-range Savoy and Craftsmen’s Bench units at the price point are admittedly quite serviceable. I think for personal use, this is very much a secondary humidor. Unless you have a use or desire for the showing off of cigars, it’s hard to explain why one would spend $200 on this versus a cooler, some tupperware and a big brick of Bovedas.

The humidor was sent to halfwheel by STOGIES World Class Cigars, which is also a retail sponsor of the site. We attempted to pay for it, it didn’t go well.