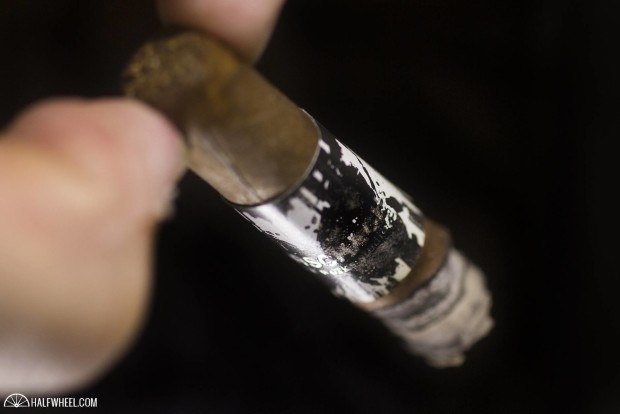 When you think of, for lack of a better term, gringos owning and operating cigar factories in Estelí, Jonathan Drew of Drew Estate and Skip Martin of RoMa Craft Tobac come to mind. But there’s another: James and Angela Brown of Black Label Trading Co., who not only own their own factory, Fabrica Oveja Negra, but also live in Estelí.

The Browns own Black Label Trading Co., but late last year they launched a new project, Black Works Studio. The project seems to be a banner to allow the factory more flexibility to produce cigars at a quicker rate and in a more limited capacity. The first three of these cigars shipped in early December, each with its own blend. The Black Works Studio Rorschach is a pretty small vitola and not one normally used for longfiller cigars. Oddly, it’s not the ring gauge, 38, that is the odd part. It’s the fact that it’s five inches, not six inches like most petite lanceros. I found the cigar in Lone Star State Cigar Co.’s section dedicated to little cigars. There’s a peanut butter cookie-like sweetness from the wrapper along with a touch of leather. That carries over to the foot, but it’s joined by big cedar and some mild hay. The cold draw has a really big orange Creamsicle flavor.

The Rorschach begins with a sweet oak flavor followed by some black tea and coffee bean on the finish. The first retrohale is really nice with just a bit of creaminess surrounding the oakiness. Each of the three cigars I smoked have an incredible amount of variance in the cedar present in the beginning stages; some are dominated by cedar, while one sample has none detectable. Outside of the difference in cedar, the first thirds get to the same place: a sour wheat flavor, which reminds me of a wheat beer, along with some breads and creaminess. There are a lot of grain flavors: sometimes more bread-like, sometimes more beer-like and at times just plain grain. The finish has some blood orange and white pepper along with a building creaminess. Smoke production is where a lot of small ring gauge cigars find themselves: calm until a puff is taken. The flavor is full, while the body and strength are both medium. By the second third all three of the smaller Black Works Studio offerings have a fair amount of cedar happening. There’s also granola and some saltiness added to the core grain-dominated flavor profile. However, the finish is where the progression really is; as it’s salty with some earthiness. There’s also sour lemon and pepper that comes and goes as it pleases. The initial grain flavor along with the sweet and saltiness would make for a classic gose description, sans coriander, which I don’t find in the cigar. Of note, the lemon in the retrohale is much more of a candied flavor, almost reminding me of lemonade. The draw opens up a bit and the resting smoke production increases slightly with it. Strength is now medium-plus but the flavor and body remain where they were previously. There’s a lot more pepper in the final third, mainly black pepper, along with some mustard powder upfront. It’s a clear transition of flavors with not a ton being carried over from the middle part. Something that is familiar is the importance of the finish. It now has a potato-like starchiness and some sour apricot. With less than an inch left, there is a transition into a salty potato chip and I’m able to find some coffee bean underneath. After an hour—yes, an hour—the Rorschach has presumably given me everything it’s got and I decide to call it a night. Update: The review implied this cigar was a longfiller, it is not. See comments below.

While smoking a cigar in one hour is a near record for me, I imagine that’s not what was intended given the small size. As for the flavor, it was full, but not in your face full, and fairly nuanced. While I appreciated the salty and sour contrasts, there were puffs where they overwhelmed the rest of the flavors and those weren’t great. In the end, I’d smoke another, but I cannot see myself seeking this out. I will say that I look forward to revisiting this rather unique cigar after a year to see where things stand.