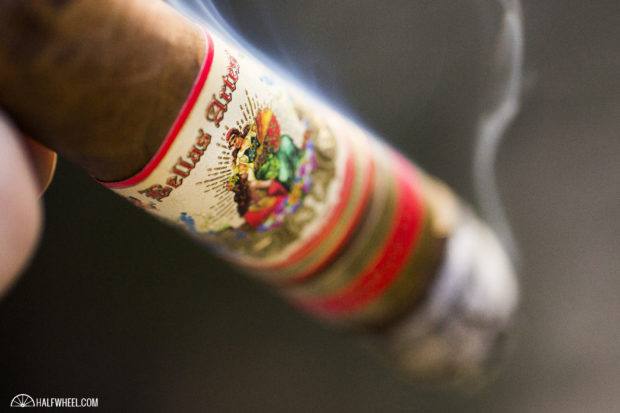 As part of its slate of official new products released at the 2016 IPCPR Convention & Trade Show, A.J. Fernández put forth Bellas Artes, a new regular production addition that features a hybrid wrapper named rojita, a cross between: Connecticut 8212, corojo 99 and Havana 2000 seeds that are grown in Nicaragua. Underneath that sits a Nicaraguan Havana 92 binder and fillers from Brazil, Honduras and Nicaragua.

It’s a combination that isn’t seen every day, and as such gives A.J. Fernández’s extensive portfolio inroads into another space on the flavor spectrum. The company focused on not just the wrapper but also on the origins of the binder, which comes from a region of Nicaragua called Quilalí, located about 70 miles northeast of Estelí and which has been a tobacco growing area for over 200 years.

In addition, the Brazilian filler is viso that comes from the Mata Norte region of the county and is said to be high in nicotine content with prominent sweetness. A.J. Fernández says all the tobacco used is aged for at least three years.

The line is offered in four box-pressed sizes, all of which come in 20-count packaging. 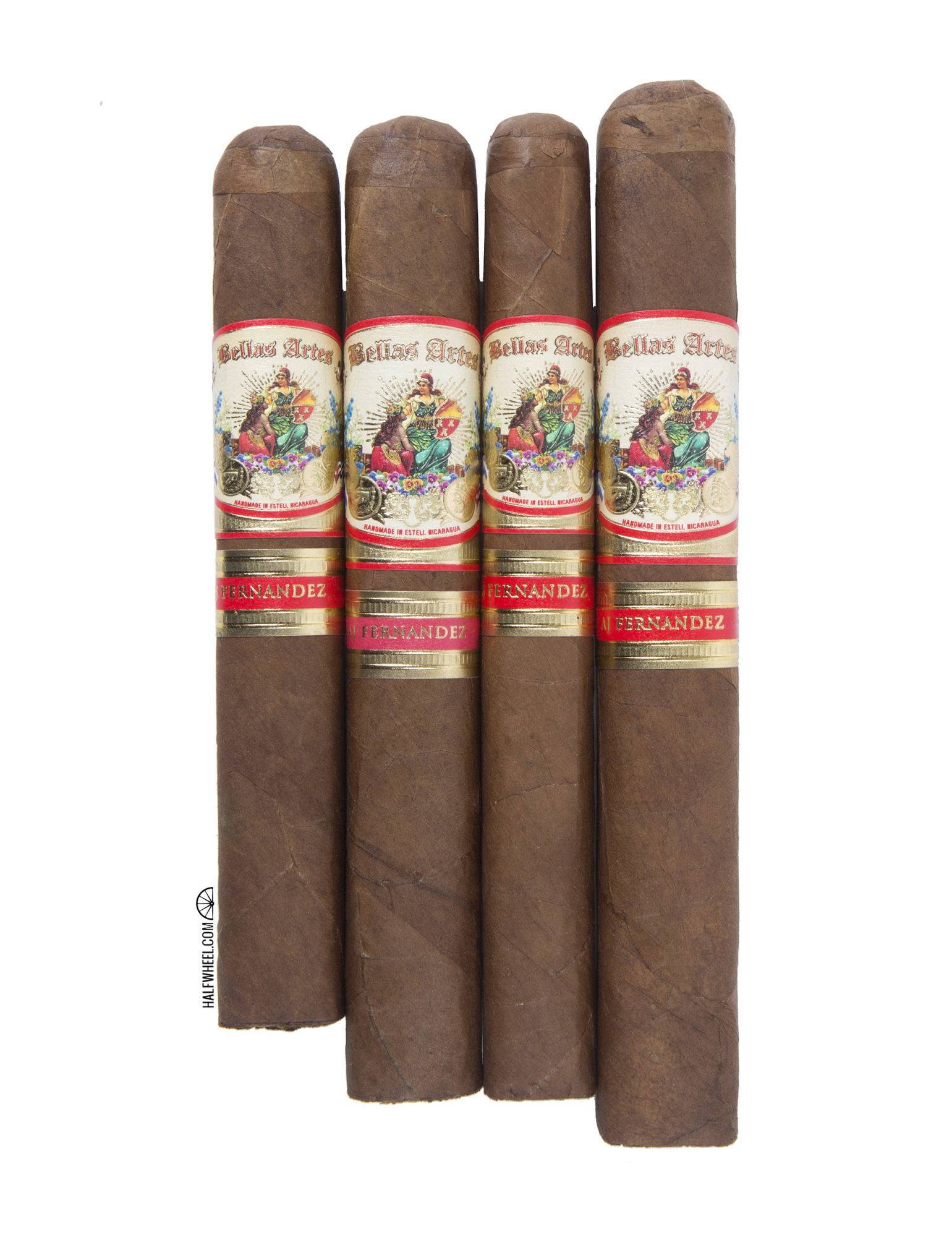 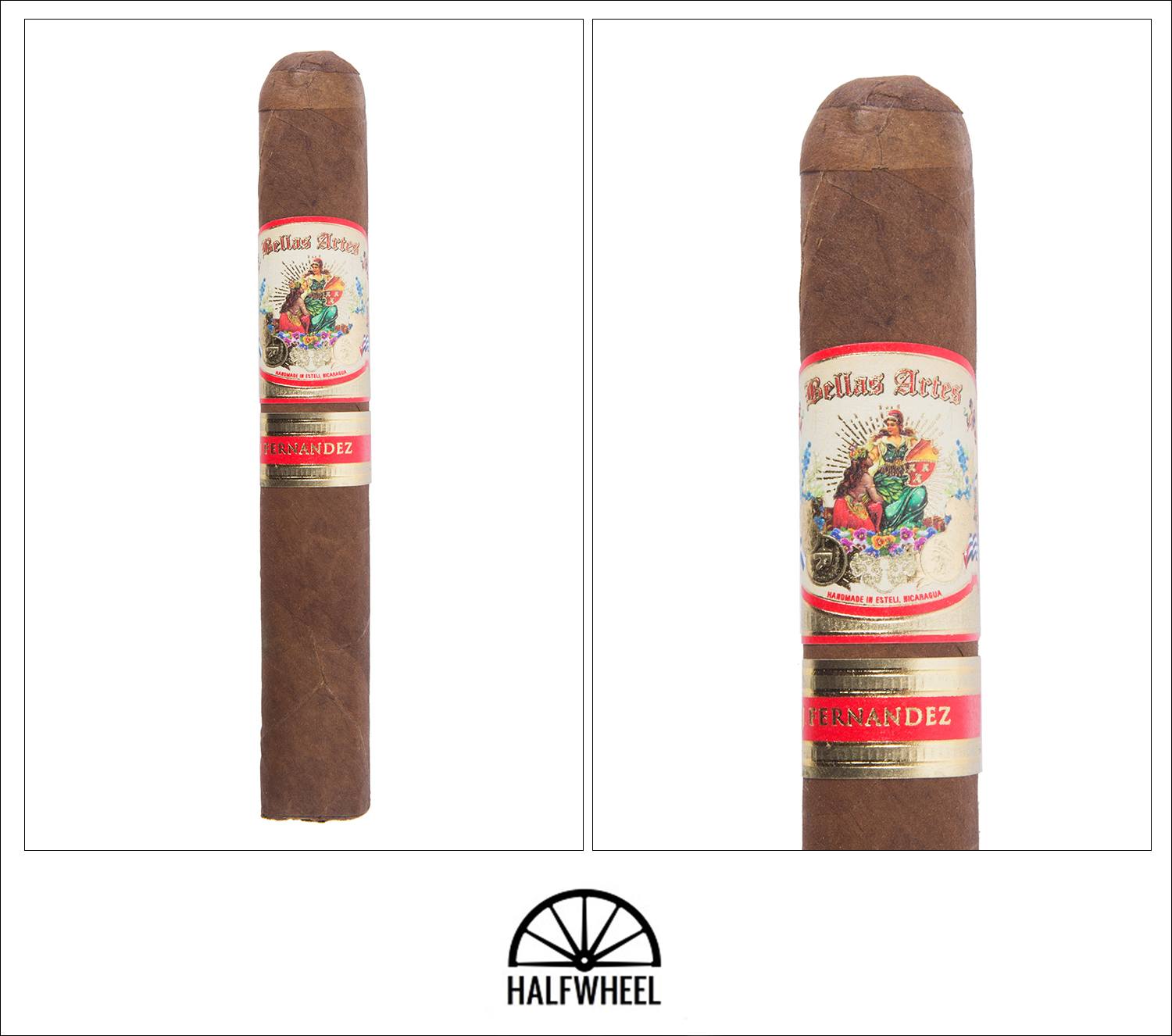 Given that the Bellas Artes uses a hybrid wrapper that I’m not familiar with, I’m most intrigued by that top leaf, a peanut butter shade wrapper that is soft and supple to the touch and not particularly oily, toothy or marked with veins. It’s a fairly uniform color, though the cap does vary the most among the three samples, often a shade or two different from the rest of the cigar and a problem that isn’t unique to this leaf or factory. The box-press comes with a bit of give, as the cigar is softer than a good number of the parejos that I have been smoking lately but it’s quite in line with this style of presentation. The foot provides a bit of sweet cereal that is along the lines of Frosted Flakes or Corn Pops, with one sample making me think of Honey Smacks in particular. The cold draw is smooth and easy and also has some sweetness to it leaning the way of apple and banana but also with a dry undertone that suggested dried fruits or a bit of very dry kindling.

The Bellas Artes opens with a chimney full of smoke output and a peppery profile that brightens up a base note of wheat and minerals. While not overpowering for my palate, I find it fairly intense, something compounded by the fact that it doesn’t have much depth to it; think about listening to loud music with no bass and you get the idea. Both flavor intensity and smoke production dial back a bit as the first inch of gray ash builds, but the core of the flavor solidifies a bit with a note of warm coffee now at the core. The draw is a touch firmer as well, while the burn line is even if at a slight angle. After the first clump of ash departs and the burn line sets its sights on the secondary band, black pepper gets added to the smoke, which turns the intensity up a bit. From there, pepper stays present as the smoke turns soft and creamy, mellowing the cigar back down as it eyes the second third but also picking up a slightly smoky aroma in one sample that is quite good, even first thing in the morning. Technical performance has been outstanding so far, with only a slightly uneven burn line the only thing of note. 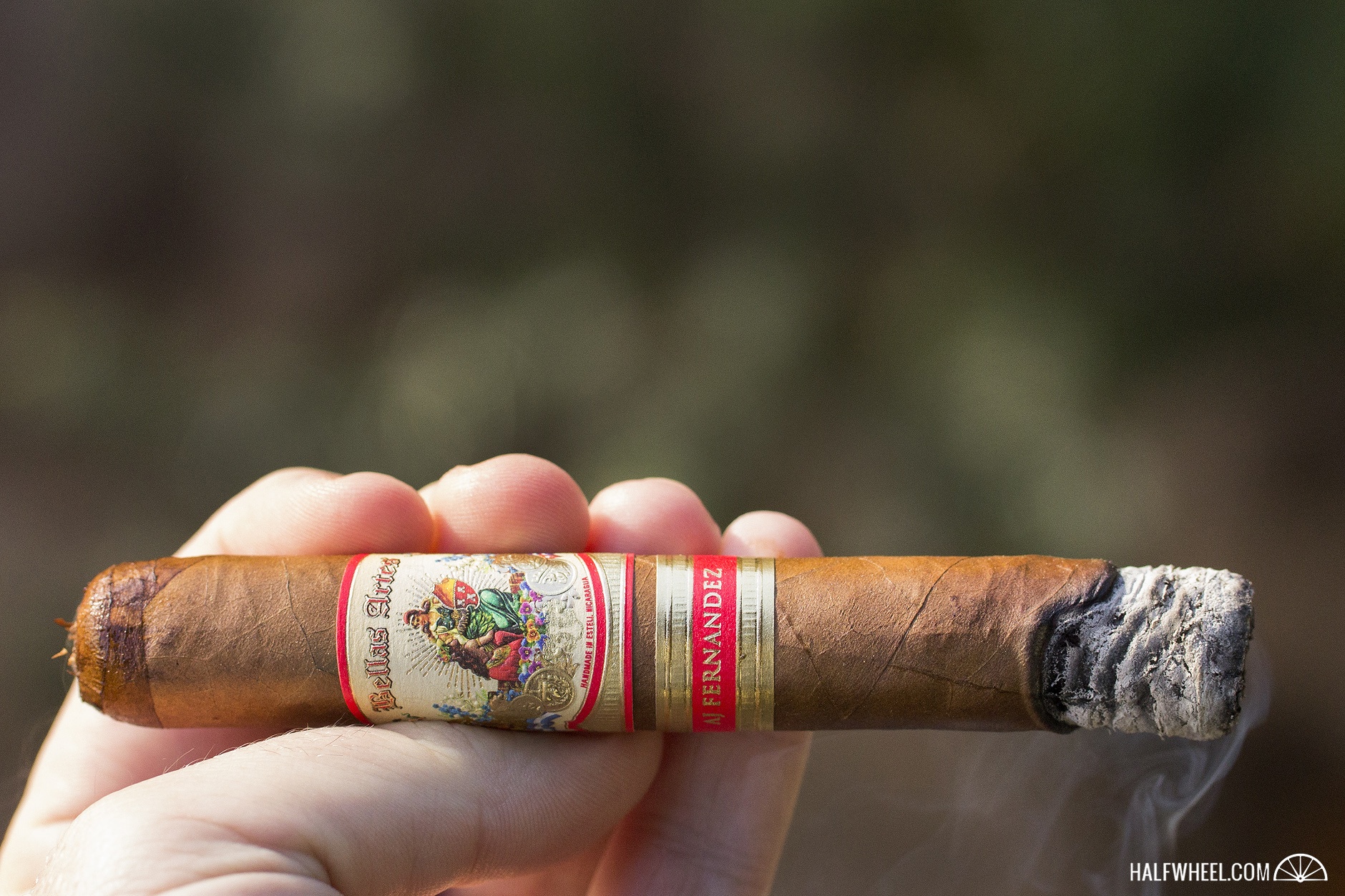 The start of the second third sees the Bellas Artes try and evolve the pepper and creaminess together; a noble cause but one that gets sidetracked in two samples by a building mineral base that just doesn’t vibe with the rest of the flavors. In the third, it’s an interesting combination of woods, chicken broth and mild yet sweet and tangy spice that is a distinct combination and one that I wish had been present in the other samples. While things begin to sort themselves out in the subsequent puffs, through the first half I find my self impressed if not floored by the Bellas Artes; the flavor is certainly good though not rich with descriptions, and when the pepper isn’t at its most vibrant, the cigar tends not to be either. Smoke is more than abundant past the midpoint, with good amounts of white pepper for the senses that is light but stimulating, while the palate gets a bit of a metallic finish that lingers a few moments too long given what it is offering. 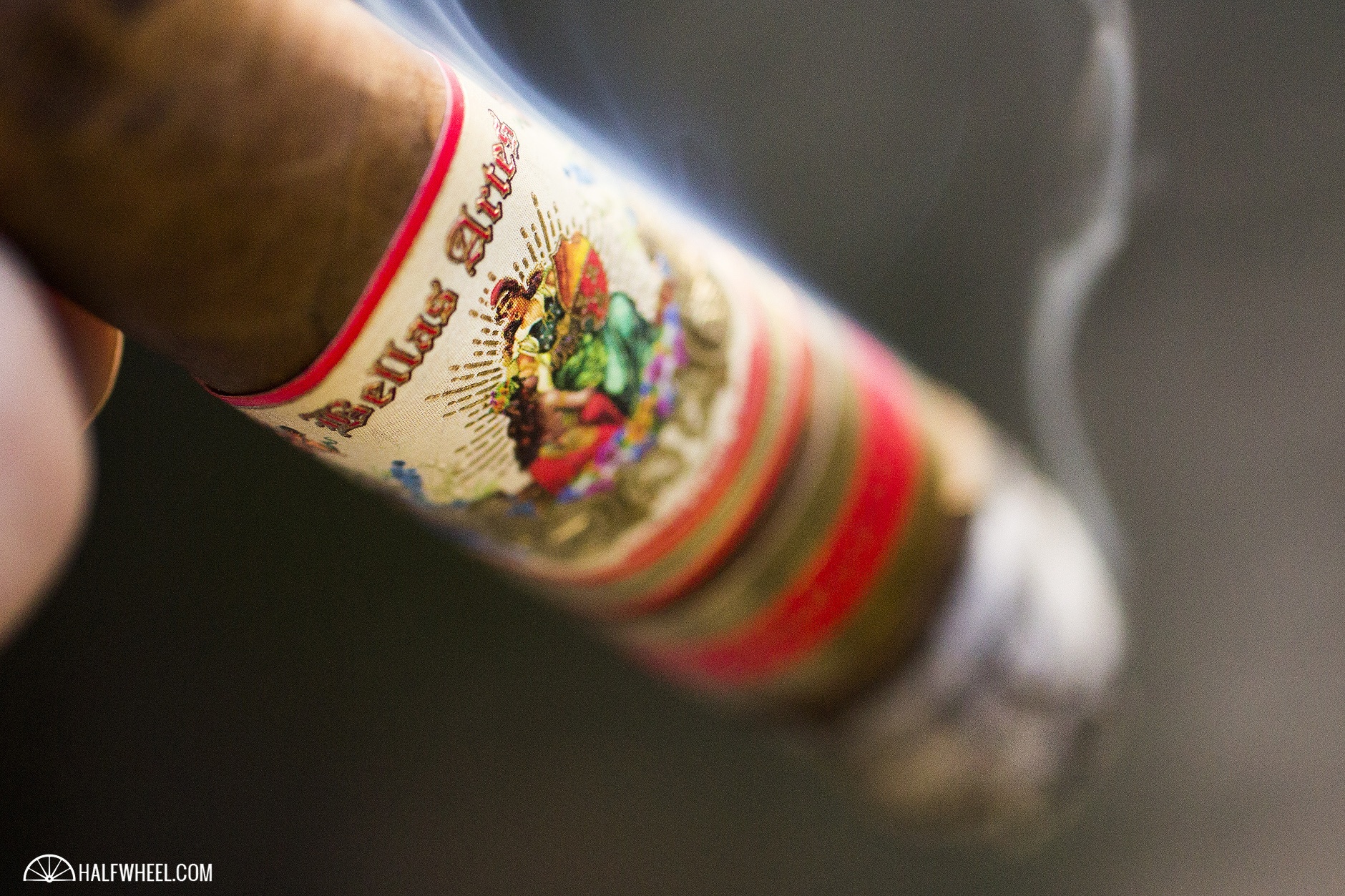 Other than the bands coming off and the even burn line steadily progressing, there is really no cue as to the beginning of the final third, and I find myself getting somewhat surprised when I notice the burn line being as far along as it is. The black pepper continues to be best and most consistently experienced through the nose, while what the palate gets doesn’t show the vibrance I’d prefer on a consistent basis. It’s not until the final two inches that the cigar ramps up the pepper and gets the nose tingling at a new level, with a spicy orange citrus note making its first appearance and notes of cedar emerging via the resting aroma. The cigar continues to lack any gravitas, not that it’s an inherently bad thing, but I find myself searching for some weight to balance out the brightness of the pepper and occasional spice, even more so in this particular section. The balance is still good and the finish on the tongue has cleaned itself up by the final puffs, though the front of the tongue gets left tingling quite significantly. Other than some sporadic combustion issues, the Bellas Artas has performed near flawlessly from start to finish. 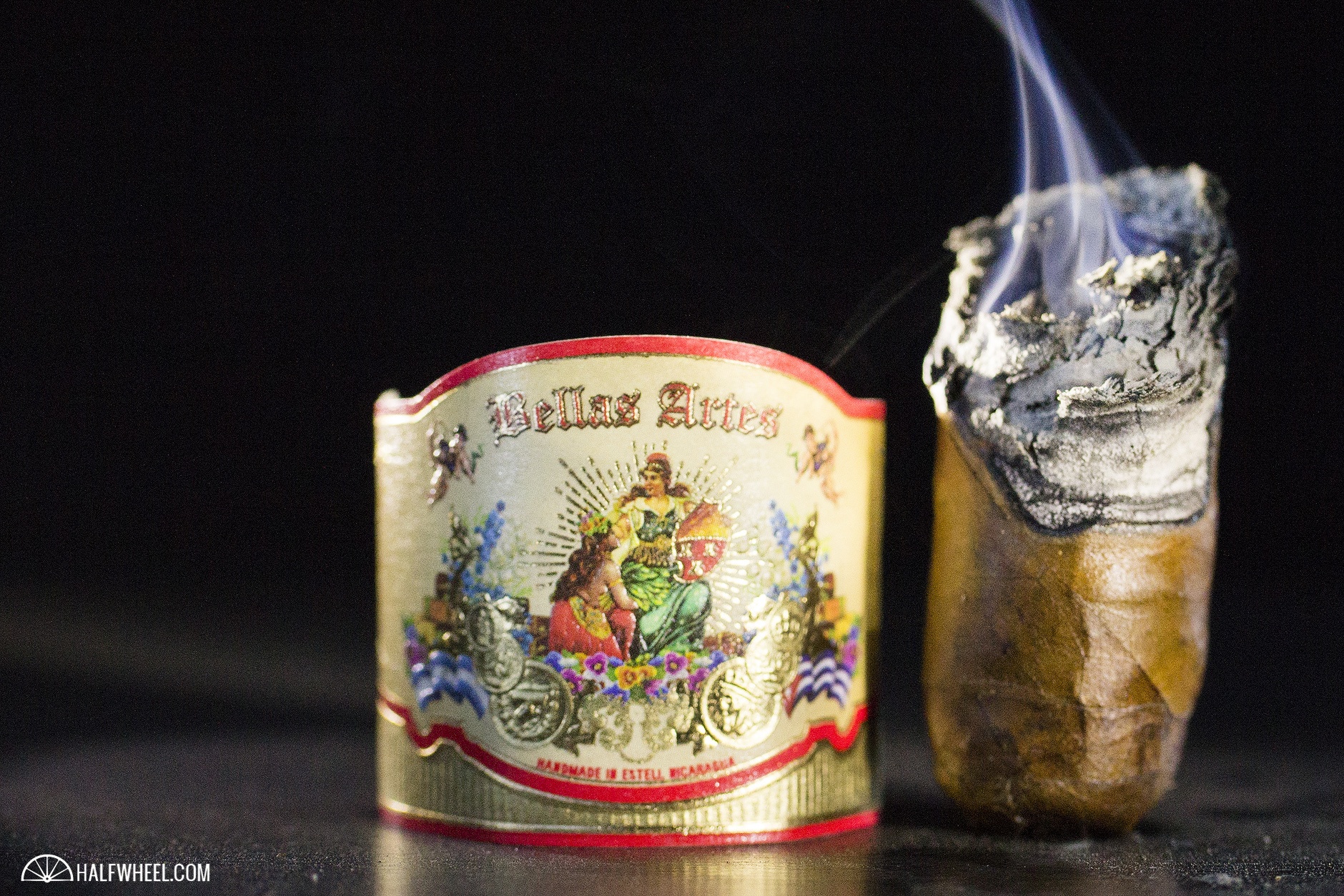 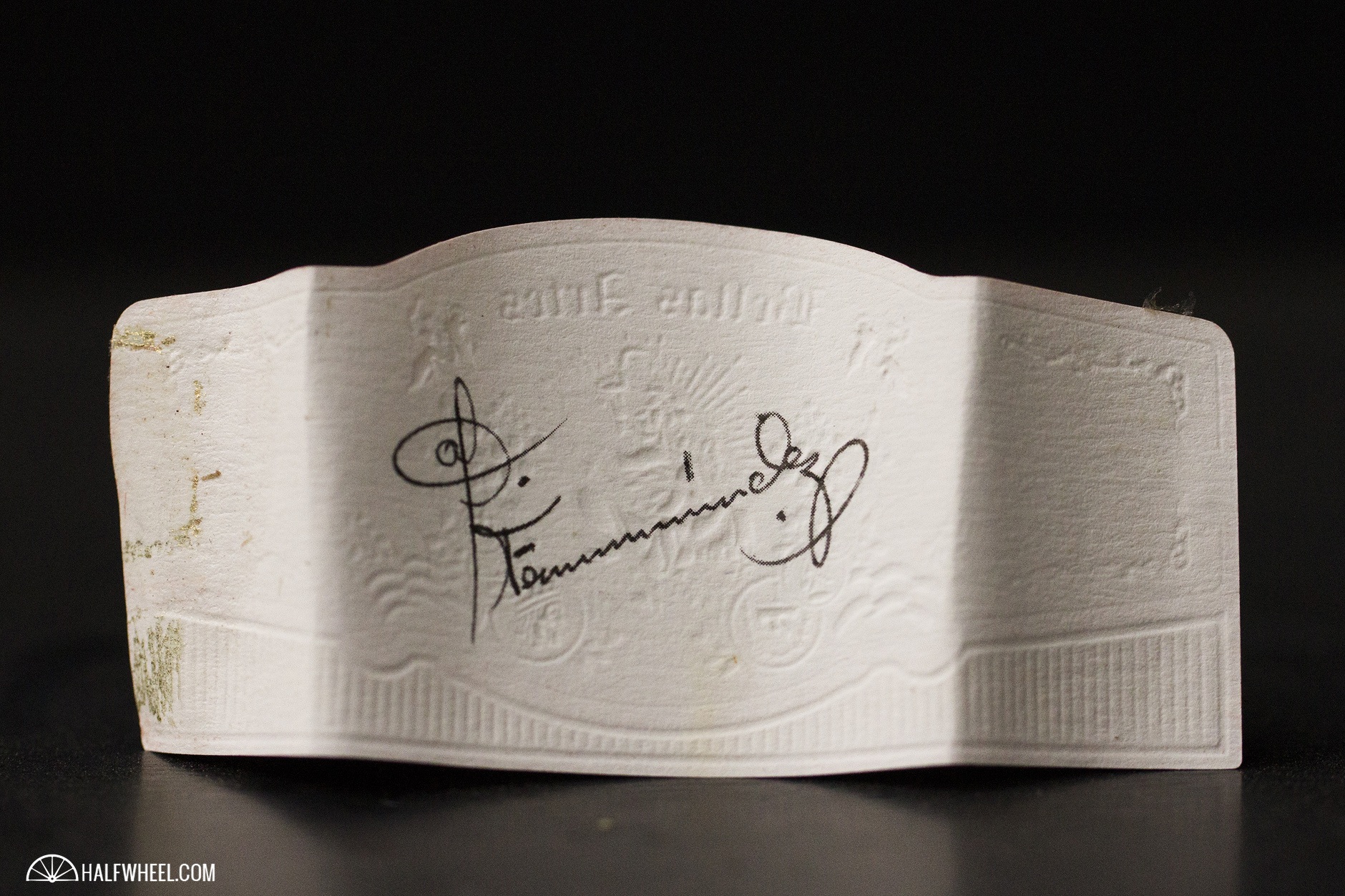 To borrow a line from our coverage of this year's trade show, A.J. Fernandez is everywhere, seemingly producing cigars that cover every flavor and strength profile in one way or another. Carving out a new space means getting adventurous with blends, which is something that I think the Bellas Artes tries to do by way of a hybrid wrapper, a binder from a region not known by the majority of cigar smokers and complex filler blend from three countries and five regions. There are points where the blend is interesting and engaging, and there are others where it rough and off-putting. The lack of a grounding base note was interesting and one that caused a bit of dissonance in my mind. There may well be a size in this line that brings everything the Bellas Artes has to offer together in sharp focus and even balance, it just appears that it isn't the Robusto Extra.