During the 2019 IPCPR Convention & Trade Show, Davidoff of Geneva USA released a quartet of new cigars under its AVO brand, each of which features a very special ingredient or process that makes them unique.

While the company is highlighting one of the unique aspects, it’s not disclosing much of the rest of the blends or at least was the plan prior to the listing on its own online storefront. The idea behind this was to focus on one unique element.

Each of the four cigars features a different color scheme. The subject of today’s review is the Unexpected Celebration, a 6 x 54 toro extra that was rolled and then aged for six years before being released. In terms of blend, the Celebration features a wrapper leaf sourced from Ecuador while both the binder and filler tobaccos hail from the Dominican Republic. Visually, the AVO Unexpected Celebration is covered in a light yellow-tinged wrapper that is only accentuated by the gold and yellow colors that are present in both bands. The wrapper leaf is smooth to the touch and features very little oil, although there are plenty of small bumps running from the top of the cap to the bottom of the foot. Aroma from the wrapper and foot is a combination of sweet hay, leather, white chocolate, espresso beans and manure, while the cold draw brings flavors of dank earth, hay, mushrooms, barnyard, citrus and slight vanilla sweetness.

After the extremely aromatic scents I noticed coming from the wrapper, I was not disappointed in how the AVO Unexpected Celebration starts off, with strong and distinct flavors of both creamy hay and bitter dark chocolate, followed close behind by notes of licorice, creamy cedar, minerals, gritty earth and generic nuts. There is no spice so far, but there is plenty of honey sweetness and white pepper on the retrohale, the former of which seems to be gaining strength. Construction-wise, the draw is excellent after a simple punch and the burn is close to razor sharp so far, while the smoke production is massive off of the foot. The strength is virtually non-existent, ending the first third not much further from the mild mark than where it started. 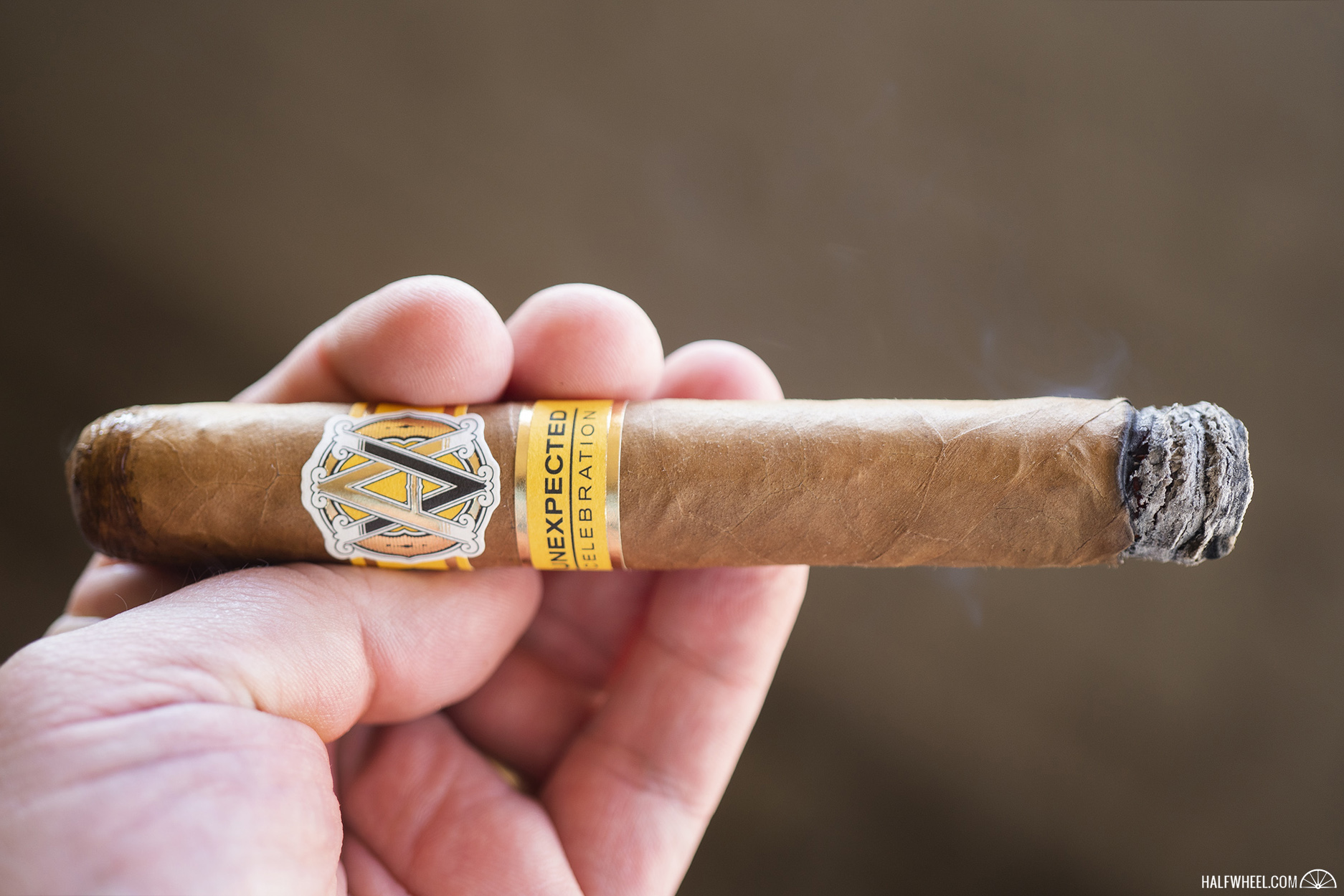 While the dominant flavors of creamy hay and bitter dark chocolate are unchanged in the second third of the AVO Celebration, more secondary flavors have been added to the profile, including mushrooms, lemon rinds, mocha coffee and aged cedar. The honey sweetness from the first third has gained strength as well, while the white pepper that was present has been reduced by at least half. Both the draw and burn continue to impress—as does the smoke production, which is still rolling off of the foot like a house on fire—and while the strength does increase enough that I notice it, there is still quite a ways to go for it to hit the medium mark when the second third comes to an end. The honey sweetness begins to lose a bit of steam in the final third of the AVO Unexpected Celebration, although it is still easily strong enough to impact the profile in a very positive way. A dark, bitter chocolate still dominates the palate–followed very closely by creamy hay and aged cedar notes—while flavors of freshly roasted espresso beans, wheat, leather, citrus, toast and a touch of floral bring up the rear. In terms of construction, the burn remains excellent and the smoke production continues to pour off of the foot, but the burn becomes problematic enough that I have to touch it up twice. Finally, the overall strength increases enough to come within spitting distance of the medium mark, but never really threatens to cross over the line before I put the nub down with a little less than an inch to go. This is one of the most inconsistent releases I have smoked in quite a while: while the list of flavors I tasted was virtually identical for each of the three cigars I smoked for the review, the dominant flavors were very different in each. One featured creamy hay and bitter dark chocolate with honey sweetness, the second was full of burnt toast and mushrooms along with creme brûlée sweetness while the last sample tasted strongly of leather, citrus and floral sweetness. Having said that, regardless of the leading flavor, the profiles were complex and balanced with creaminess very much present the palate and finish. I have not tried any of the other releases in the Unexpected Series yet, but if they are even close to as good as the Celebration, AVO fans will be very, very happy.