2015 marked the 100th anniversary of Thompson Cigar, the Tampa, Fla. retailer that is best known for its significant online and catalog business, but whose history traces back well before the internet.

Thompson was founded by M.A. Thompson in Key West, Fla. in 1915, as both a manufacturer and distributor of cigars. Following decimating hurricanes in 1920, the company moved to the famed Ybor City in Tampa, Fla. In 1934, the company and factory would again move, this time to Bartow, Fla., where it would remain until 1960, when Robert Franzblau purchased the company and has remained the owner since.

Franzblau didn’t purchase the factory however, using other factories in the Tampa area to produce cigars, including Clear Havanas prior to the embargo. The company got its first 800 number in 1977 and in 1979 mailed its first catalog, having previously relied on letters and postcards. In 1982, Franzblau moved the company to its current location at Hangar Court, where the entire operation as well as a walk-in retail location. It wasn’t until 1986 that the company carried brands besides its own, and in 1995 the company launched its first website, with just two pages.

As a cigar retailer is apt to do for such an event, Thompson worked with several cigar companies to create store-exclusive cigars celebrating its first century in business, including Altadis U.S.A., Drew Estate, Padrón and Arturo Fuente.

The first cigar to arrive was the ACID Subculture Kindered Spirit Thompson 100th Anniversary Edition, a 5 x 50 robusto wrapped in a Cameroon leaf and which has since sold out since its March release of 10,000 cigars. After that came the Padrón Thompson Cigar 100th Anniversary Robusto, a 5 x 54 robusto extra in the Padrón 1964 Anniversary Series available in both natural and maduro versions with 1,000 boxes of 10 cigars created between the two options.

In August, Thompson released the third cigar in the series, the Montecristo Thompson 100th Anniversary Robusto Habano, a 5 1/2 x 52 vitola with an Ecuadorian habano wrapper, Dominican and Ecuadorian double binders and a filler blend from the Dominican Republic, Honduras and Nicaragua. Again, just 1,000 boxes of 10 cigars were produced for this release. 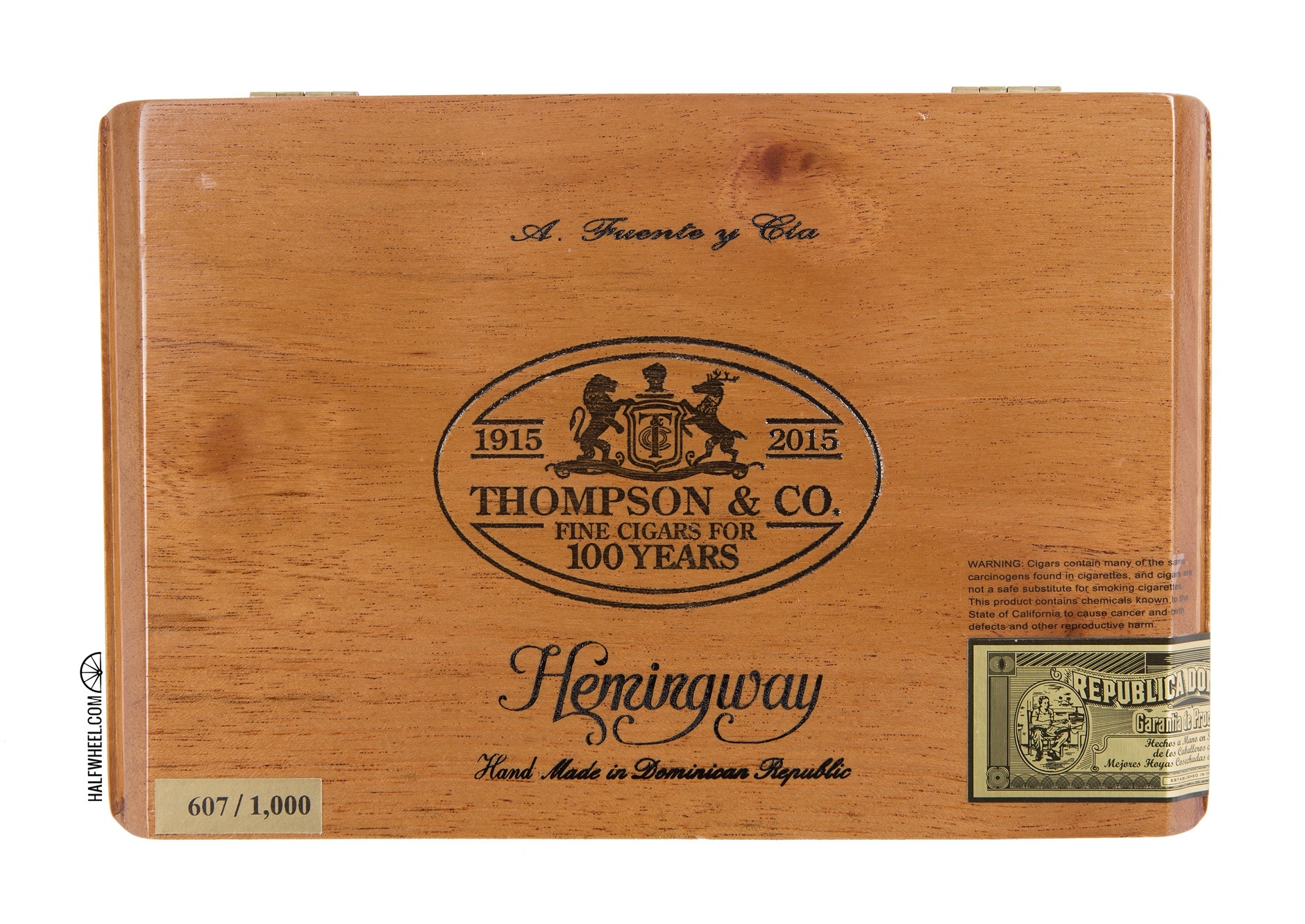 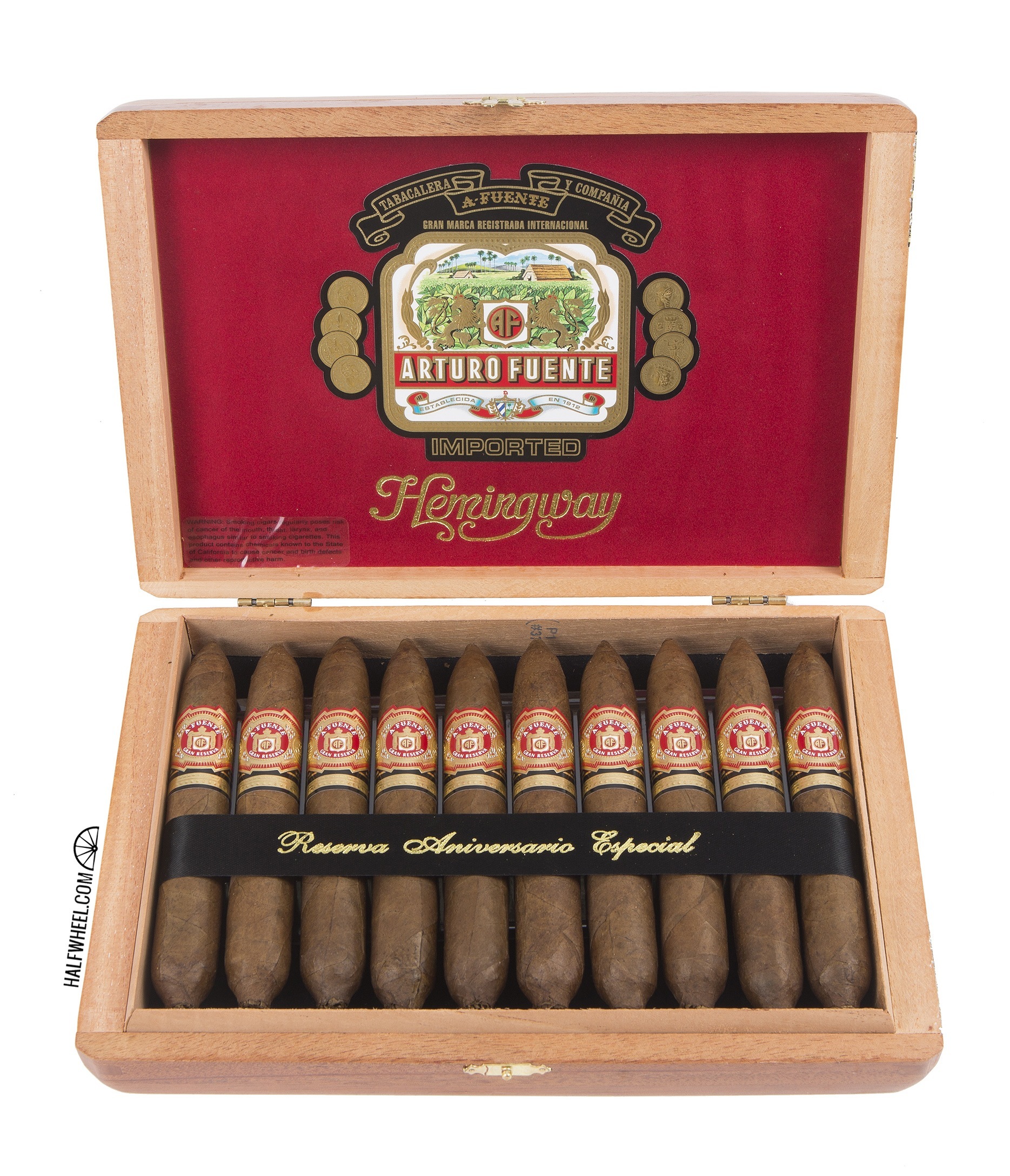 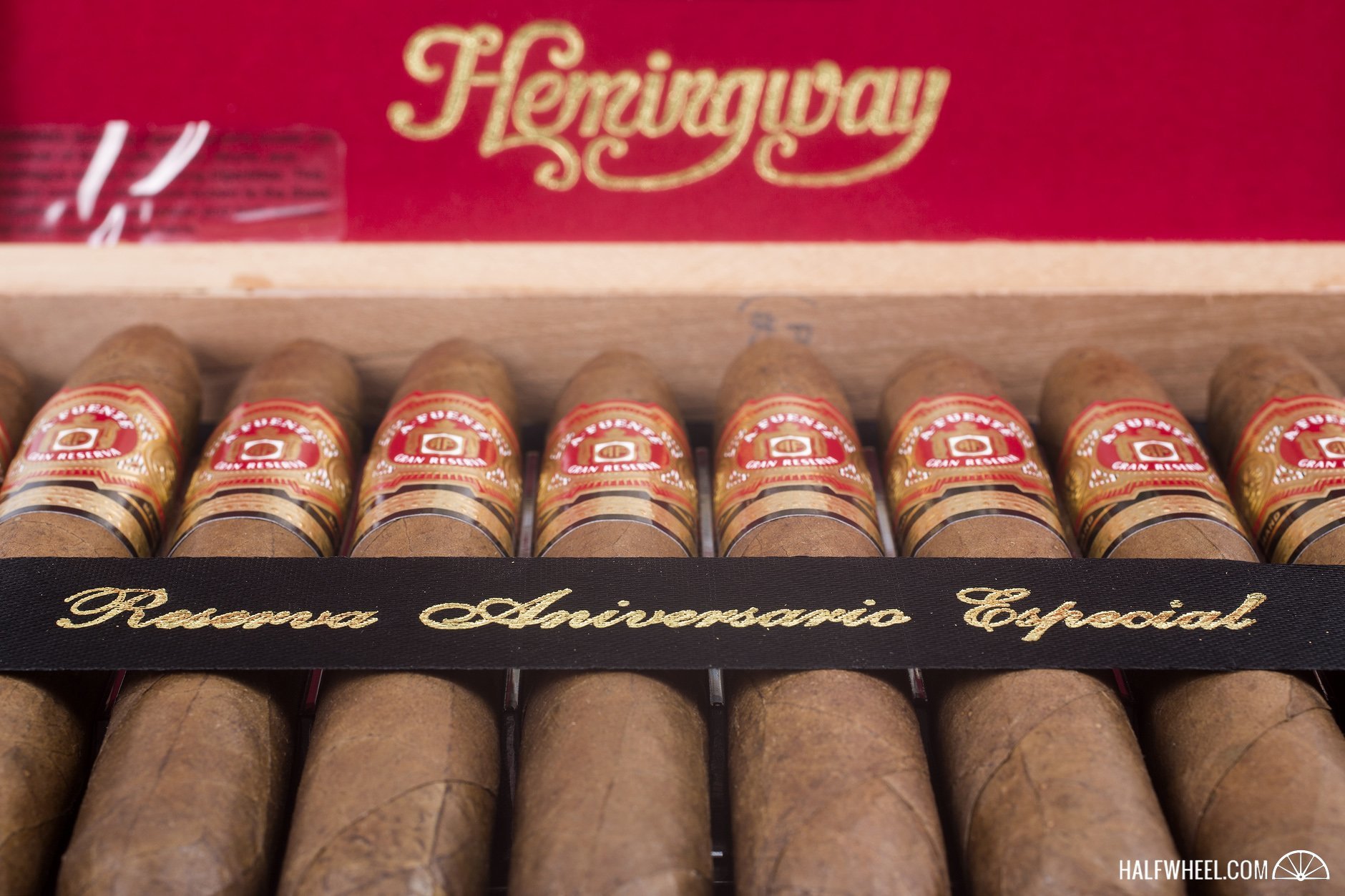 For the fourth cigar in the series, Thompson turned to Arturo Fuente and its well known Hemingway series, with a 5 1/2 x 52 perfecto being released, once again with 1,000 boxes of 10 cigars being produced. 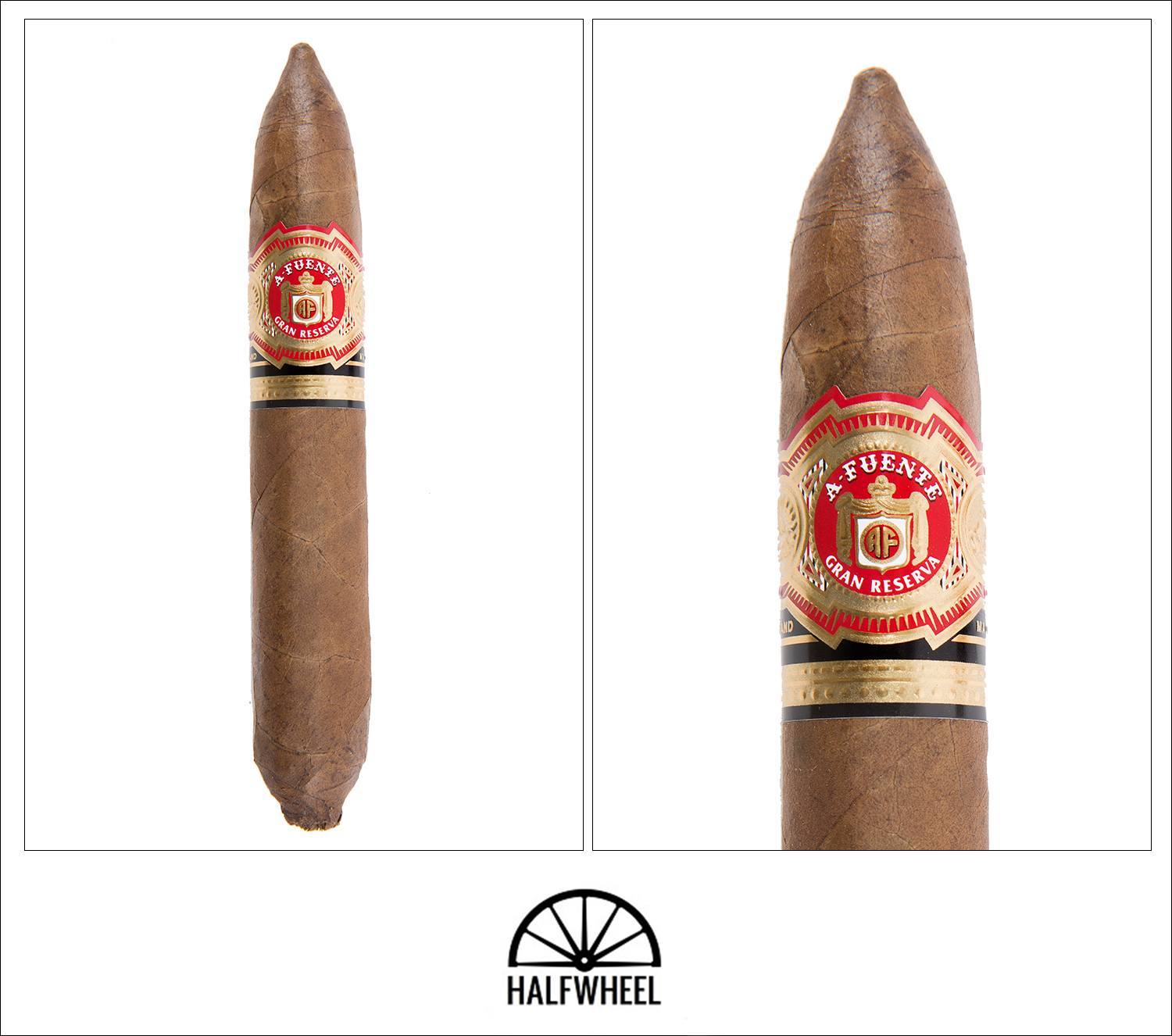 The Arturo Fuente Hemingway TCC 100th Anniversary is a beautiful cigar from head to foot; the elegance of the figuardo form is only enhanced by the Cameroon wrapper, a matte shade of brown with a slight dark honey tinge with a bit of tooth and a few very small veins. There’s not much give to the cigar, feeling firm, well filled, well rolled and balanced in the hand. From the small opening at the foot there isn’t much in the way of pre-light aroma; some neutral cracker notes are most present with just a bit of matchstick as well. The cold draw is easy and smooth, again neutral in flavor but showing just a touch of orange zest or jam sweetness in the background.

Say the word Cameroon to me and my ears—and taste buds—immediately perk up, especially when it’s coming from Fuente, so I find myself anticipating and scrutinizing the first puffs even more than I regularly would. Out of the gate the cigar is smooth and fairly mild while the smoke tries to be creamy before notes of sweet wood come in and start giving my palate what it is looking for. Pepper is a very minor part of the equation but it is there, with retrohales helping to bring it out as it offers a slight tingle to the nostrils in the process. The first clump of ash breaks off fairly unceremoniously at just under an inch, and I’m surprised by how quickly the burn line is moving up the cigar. The draw remains fantastic and while smoke isn’t abundant, it’s not lacking, either. The sweetness that was present in the first third of the Fuente Hemingway TCC 100th begins to fade away slowly and by the start of the second third it’s relegated strictly to the aroma, but when it hits the nose it is incredible, a warm apple pie note that is almost divine, luring me almost into a trance where all I’m able to do is focus on it. Pepper picks up just a bit, and the cigar has quickly gone from a medium-minus to a medium-plus in flavor, with the strength mild and holding fairly steady through much of this portion. The burn line continues to fly up the cigar, with an easy and smooth draw helping facilitate things. 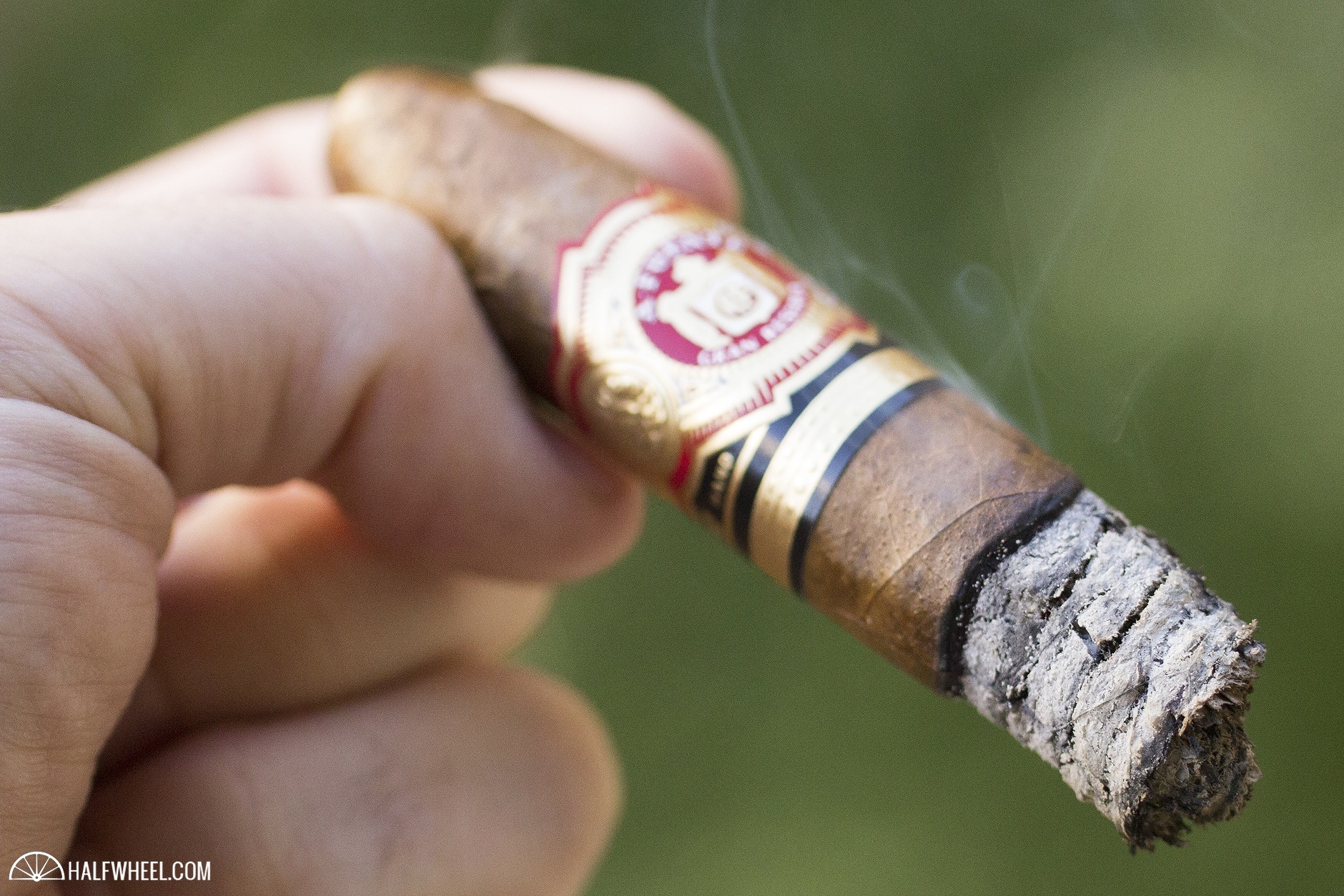 There’s a continual drying of the flavor as the burn line crosses into the final third of the Fuente Hemingway TCC 100th, a process that continues to be on the quick side. As heat becomes more of a factor, the flavor gets just a bit harsh; a friendly reminder to slow down a bit and let the cigar offer its best at the rate it’s designed. Smoke production increases quite noticeably as thick clouds of fluffy white smoke pour out of the cigar with each puff, and the burn line stays sharp and even. The final puffs are marked by a dry, woody note that can get warm in a hurry, with the flavor lighting up my entire mouth, not just my tongue. 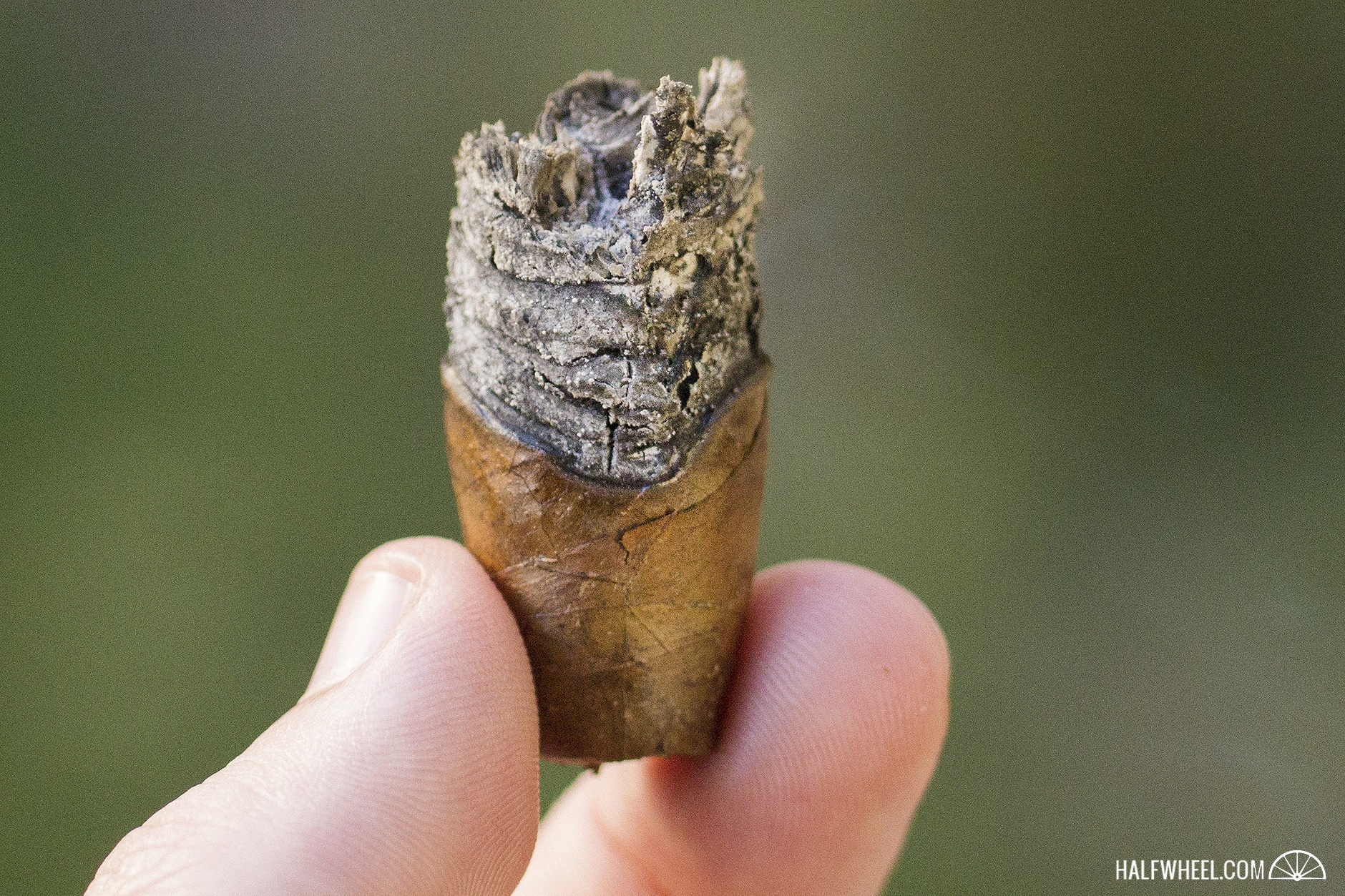 Maybe my expectations of Cameroon are too high, as I kept hoping the Arturo Fuente Hemingway TCC 100th Anniversary would have some semblance to the Don Carlos blend and in particular, the Arturo Fuente W. Curtis Draper 125th Anniversary. Unfortunately this one fell a bit short in that department, and while enjoyable, comes across as just a bit flat other than for all too brief of a time in the second third. While I certainly wouldn’t turn one of these or any Hemingway down if offered, I don’t think I’ll be in a hurry to pick any more up.