In 2015, well-known cigar retailer Thompson Cigar Co. celebrated its 100th anniversary with a number of new cigars, including this one, the Arturo Fuente Hemingway TCC 100th Anniversary.

It’s a 5 1/2 x 52 perfecto that uses the well-known Hemingway blend of a Cameroon wrapper over Dominican binder and fillers. Just 1,000 individually numbered boxes of 10 cigars were produced, priced at $109 per box.

The Hemingway was one of five anniversary cigars, joining releases from Drew Estate, Padrón, Montecristo and a private label brand, as well as a number of other releases including pipe tobacco, hats, ashtrays, travel humidors and cigar cutters.

Here’s what I said about the Arturo Fuente Hemingway TCC 100th Anniversary when I reviewed it in December 2015:

Maybe my expectations of Cameroon are too high, as I kept hoping the Arturo Fuente Hemingway TCC 100th Anniversary would have some semblance to the Don Carlos blend and in particular, the Arturo Fuente W. Curtis Draper 125th Anniversary. Unfortunately this one fell a bit short in that department, and while enjoyable, comes across as just a bit flat other than for all too brief of a time in the second third. While I certainly wouldn’t turn one of these or any Hemingway down if offered, I don’t think I’ll be in a hurry to pick any more up.

Even with the pointed head and tapered foot, the Arturo Fuente Hemingway TCC 100th Anniversary doesn’t feel like as much of a figurado at first glance due to the near-perfectly straight body and relatively modest curves at the had and foot. The Cameroon wrapper is a familiar shade of brown, a bit darker than calling it tanned and showing some rustic earth hues in spots. Veins are small and visible, the roll is clean and the cigar is firm. The nipple-style foot presents a flat aroma of generic wood and tobacco, while the cold draw is a bit more vibrant with the same notes, though it’s far from more complex

The Arturo Fuente Hemingway TCC 100th Anniversary starts off with a very pleasing combination of Dominican terroir, freshly cut lumberyard wood, some mild but noticeable black pepper and just a touch of chalk. While the flavor is vibrant at the outset, I’m surprised it’s not a bit more lively and I find myself retrohaling to get some extra pepper and stimulation. The cigar thins out a bit in the fist inch and change, taking on a touch more chalk with just a hint of artificial vanilla now present. The first clump of ash hangs around of well past an inch, and once detached allows the cigar to offer a slightly more open draw and as such more smoke, something that may not have been needed but is certainly appreciated. The ambient  smoke also becomes more black pepper laden in the nose, picking up more heat for a few brief puffs. Retrohales are still fairly mild though, as the smoke seems to be enveloped in a soft blanket that allows just a touch of pepper through. 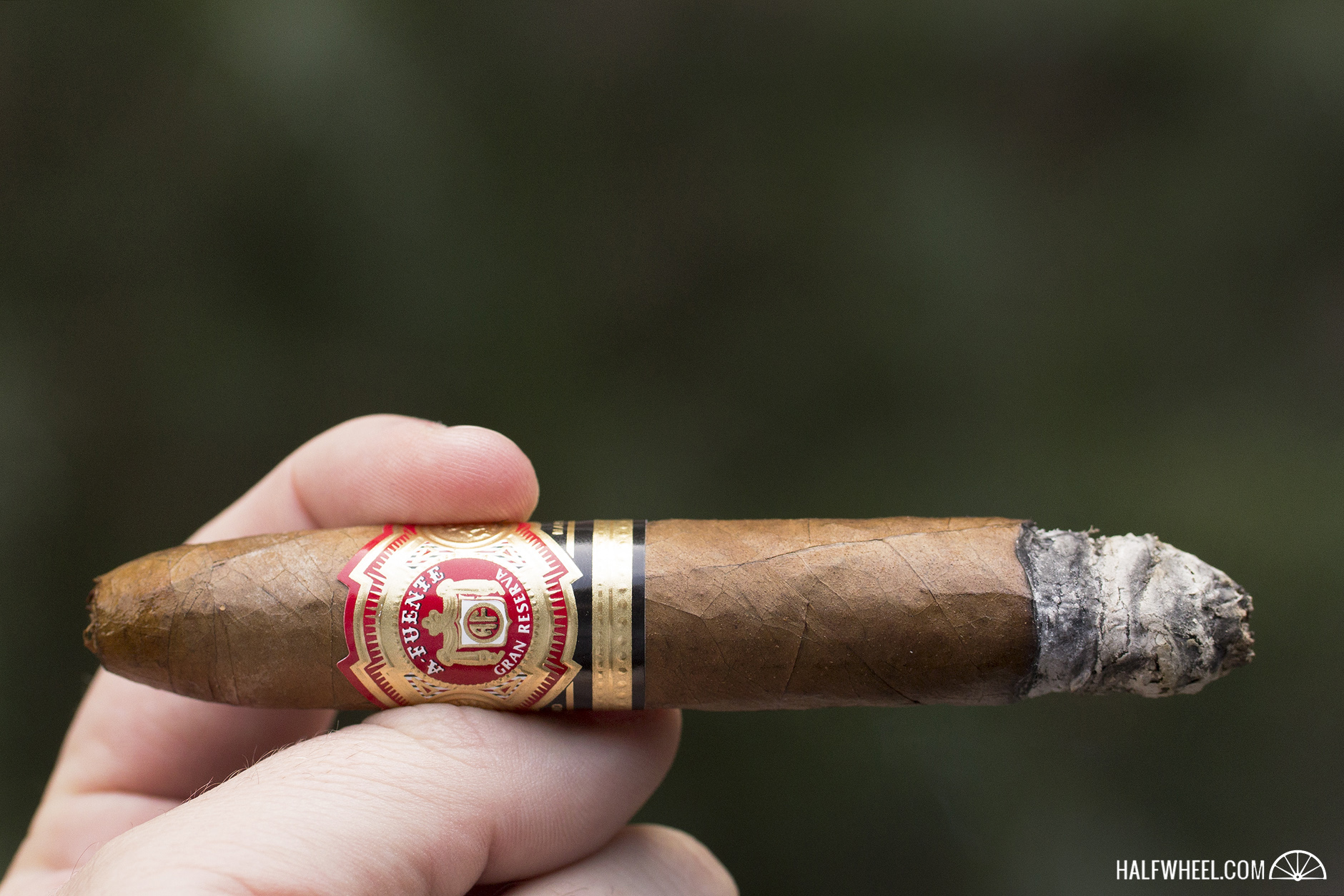 The change in pepper continues as the Hemingway crosses into its second half, and retrohales suddenly shed that soft outer layer and take on much more of a black pepper lead note. On the palate, the flavor has become thicker as the wood base note seems to now cover the palate while also drying out just a touch, and pepper is now two or three times the strength that it was at the beginning, pushing the cigar into medium-full territory. With just over two inches to go, I can say that I get my first real taste of the Cameroon wrapper, as a bit of sweet spiciness comes through and zings the palate with a pleasing note. Complexity has reached a new high, something I was a bit fearful wouldn’t happen given the cigar’s beginning, but am pleased to say finally came along. The cigar burns beautifully to just under an inch left, and with the recently ramped up flavor and complexity, I’m left more than satisfied.

After a fairly inauspicious yet enjoyable start, I was concerned that the Arturo Fuente Hemingway TCC 100th Anniversary may have lost too much of its flavor to time, but thankfully the cigar proved me quite wrong after the first clump of ash fell off. While the sweetness and strength took a bit longer to arrive than I would have liked and cost the cigar some points, when they did they quickly reminded me of how good this blend can be and certainly left me wanting more of it. While this store-exclusive vitola appears to be sold out, thankfully the blend is fairly readily available at nearly every cigar retailer.