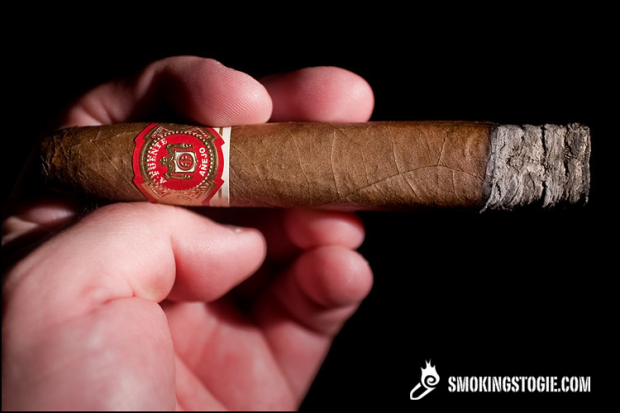 The Arturo Fuente Shark vitola of cigars is one of the most recognizable sizes of cigars on the planet. It is a round to square shape, with the cap being a more normal rounded cap, but as the cigar progresses to the foot, the shape gradually squares up until it ends at a perfect square at the end.

This vitola was first seen as a prototype given out at CFCF in 1999, and was called (oddly enough) a “Round To Square Shape” or “Bull Shark”, and was 5 5/8″ x 54. It was never officially released, and it had a rounded cap, compared to the pointed belicoso-style cap of later incarnations…

The next time this vitola was seen was in the Añejo line of cigars, as the “Añejo Shark No.77”, which was released in 2001, one year after the rest of the Añejos were first released, in 2000. The vitola was such a hit (and so memorable) that cigar smokers started referring to it as just a “Shark”, and not using the RG to identify it, as is usually done with most other Añejo vitolas, i.e. Añejo No.48, etc.

Here is some info on how the Añejo “Shark” came to be produced (and where the name came from) via Vitolas.net:

The Añejo Shark was actually made and named because of Marvin Shanken (Cigar Aficionado owner) and Carlito’s brother in-law, Wayne Suarez. Carlito named it the “SS Shark” because they both loved this vitola and blend; one “S” stood for Shanken and the other “S” stood for Suarez.

The “No.77” designation comes not from the ring gauge of this cigar, as it does for the other cigars in the Añejo line, but rather from a more amusing reason altogether.Carlito took his kids to Sea World in Orlando, FL, and there noticed that some of the sharks in the tank had two pectoral fins, which looked sort of like two 7’s.

As of this moment in time, there are now four different “Shark” vitolas in the Arturo Fuente lineup, not including the prototypes, which are extremely difficult to find, let alone buy. (All info Courtesy Vitolas.net):

They are (from left to right): 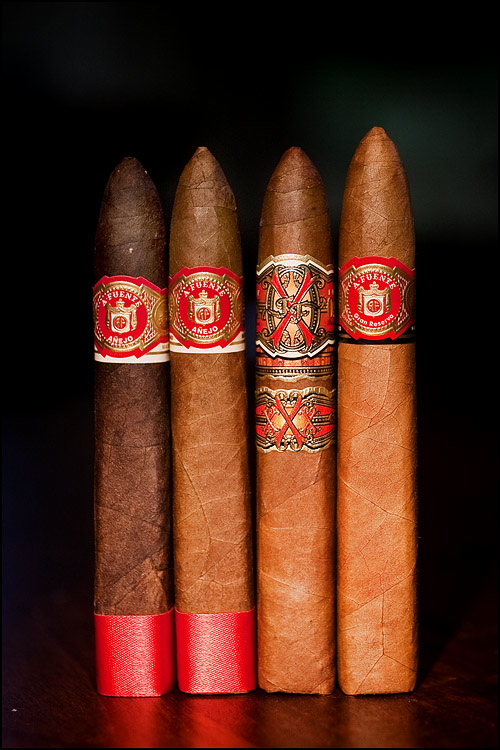 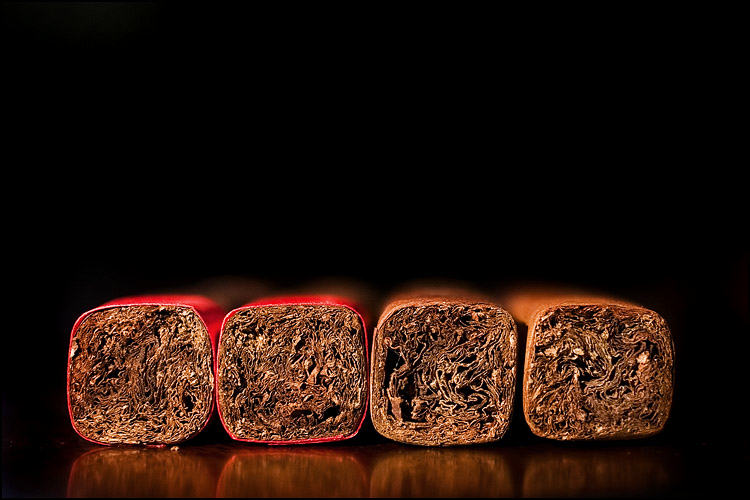 In November of 2006 Holt’s offered the Sand Shark as part of the Carlito’s Way Sampler. Here’s how they described it:

This sampler is unbelievable! This could be the single most sensational sampler in the history of cigars! Not only is each cigar here fantastic, but also extremely rare. Let’s put it this way: You have a better chance of finding Jimmy Hoffa than you do of finding these 5 marvelous cigars anywhere other than Holt’s! The Arturo Fuente Añejo Special Release Cameroon Shark has never even been sold before! We anticipate a full-scale feeding frenzy. Here’s the story behind this sampler!

About a month ago, the Holt’s Tasting Committee was lounging around Holt’s headquarters smoking a boatload of cigars as usual. We had a couple minutes to spare, so we decided to design the ultimate 5-cigar sampler. We put in a call to our main man Carlos Fuente Jr. and bada bing bada boom – he made it happen! Carlito blended and manufactured each of these cigars and is a huge proponent of this 5-cigar selection. Now we’re thinking: If Holt’s is able to bring you something as outstanding as this sampler, why shop for cigars anyplace else? That’s a darn good question. Enjoy while supplies last! 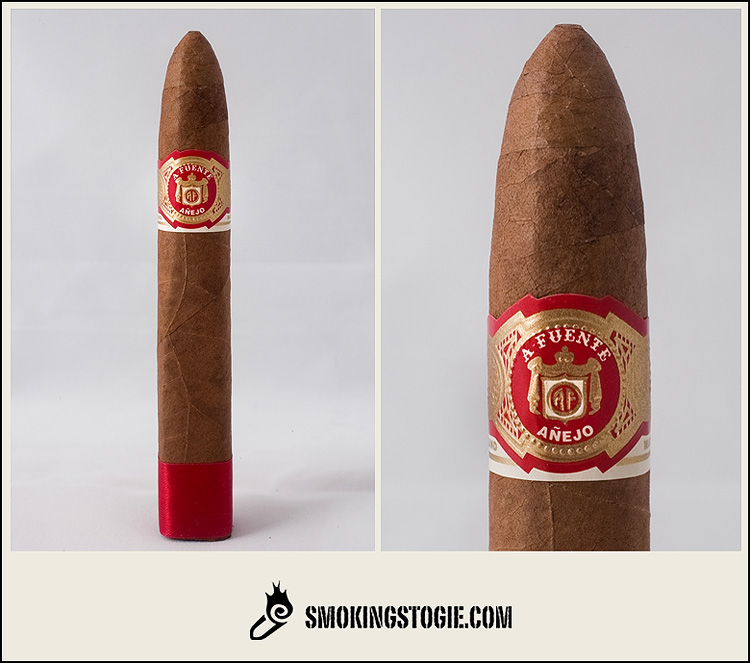 The cigar itself has a very light brown wrapper, especially when compared to its maduro brother and is totally smooth and seamless to the touch. I love the look of this vitola, always have. The wrapper smells like a combination of manure, pepper, cedar and leather. It is hard as a rock when squeezed with no give at all. The cold draw is a combination of sweet cedar and other wood, quite sweet with a bit of spice.

The first third starts out much like the cold draw with quite a bit of sweet oak, nuts and creamy chocolate. There is quite a bit of spice on the retrohale at first, but it calms down after about 20 puffs or so and recedes to the background. A really great start, but quite sweet and creamy in profile and I could even taste it on my lips a bit. 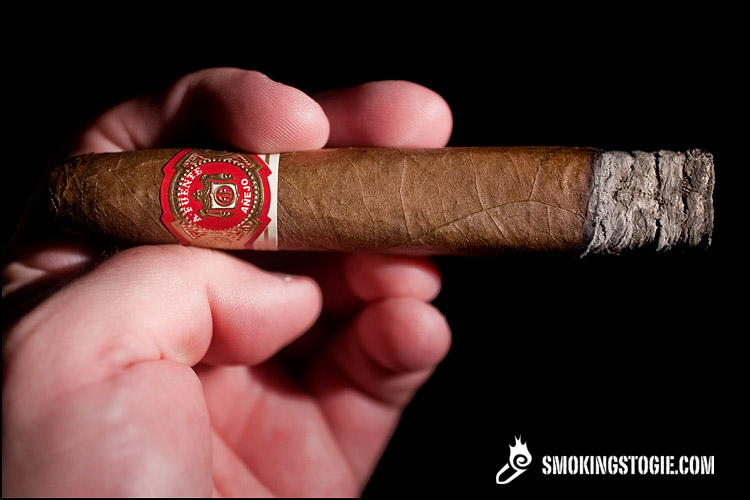 The second third turns around almost totally, there is quite a bit more spice and pepper coming through. The core flavors are still the same, leather, sweet oak, chocolate, but the sweetness has diminished in the wake of the spice. Basically the spice from the background of the first third and the sweetness switch places, a very interesting shift and not something that I have tasted in many cigars. At the very end of the second third, I also taste just a tad bit of citrus, almost like lemon zest. The burn and construction are astounding at this point. 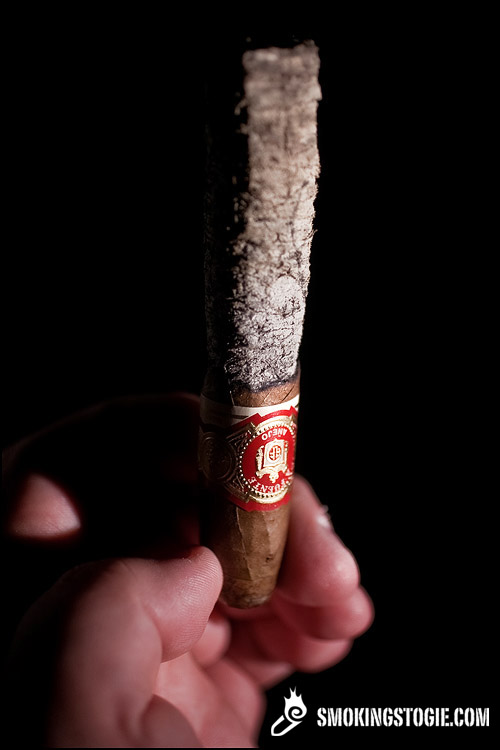 The final third basically combines everything into a great tasting soup of flavors: the spice calmed down again and the sweetness took back over. The profile becomes quite creamy in nature with the oak, leather, chocolate, citrus and leather really making this a great ending. I smoke it to the nub and it never got harsh or bitter. The finish was quite dry as well. 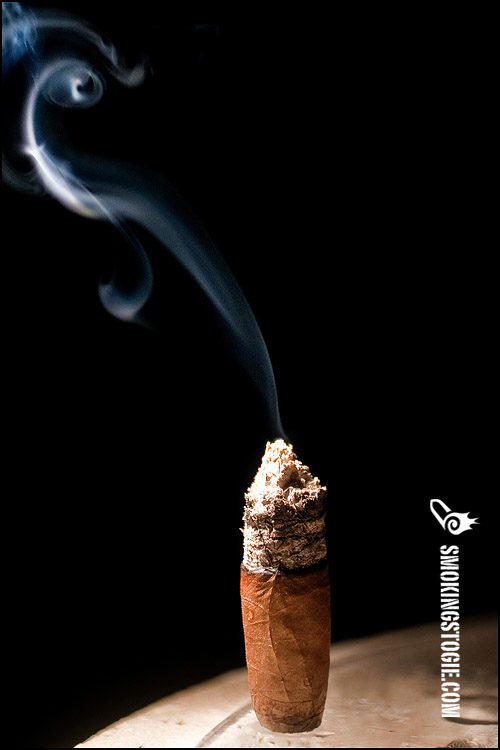 In my mind, the Arturo Fuente Añejo Sand Shark is a prime example of how nothing more than a different wrapper change can change the flavors of a cigar in major ways. The regular maduro Añejo Shark is a spicy wood bomb, and with nothing more than a different wrapper, it turns into a creamy, sweet goodness, but keeps the best flavors from the blend. This blend is infinitely more complex than the maduro version and there is plenty of spice to keep the sweetness in check. This is one of those rare cigars that is actually worth tracking down and paying for.