There are times when circumstances and passions come together, and in the cigar world one recent example of that is the limited edition series of cigars that The Humidor in Wichita, Kan. released for its fifth anniversary at the start of November.

The explanation for the cigar and the special release commemorating the store’s fifth anniversary was chronicled in this news story from mid-October, when Gorden Crippen of The Humidor said that “we are kinda sorta movie freaks, so much so that one night we were watching Quentin Tarantino’s Reservoir Dogs and were struck with the idea that we should do an entire set of cigars based on the movie.” The idea gained traction among the group and they proceeded to build cigars around the main characters, and the fact that there were five main characters corresponded with the store’s anniversary. But as fans of the movie know a sixth character is killed off right after the credits, so Crippen and his crew decided that a sixth cigar would be “one to grown on.”

The store approached six different manufacturers about creating store exclusive cigars that would be sold in two formats: first, in the typical way as singles and boxes, but secondly and in another tie-in to the movie, in a six-cigar sampler called The Heist that is packed in a jewelry bag and velvet pouch. If you’re familiar with the movie, you’re aware of the central plot line of a failed diamond heist. 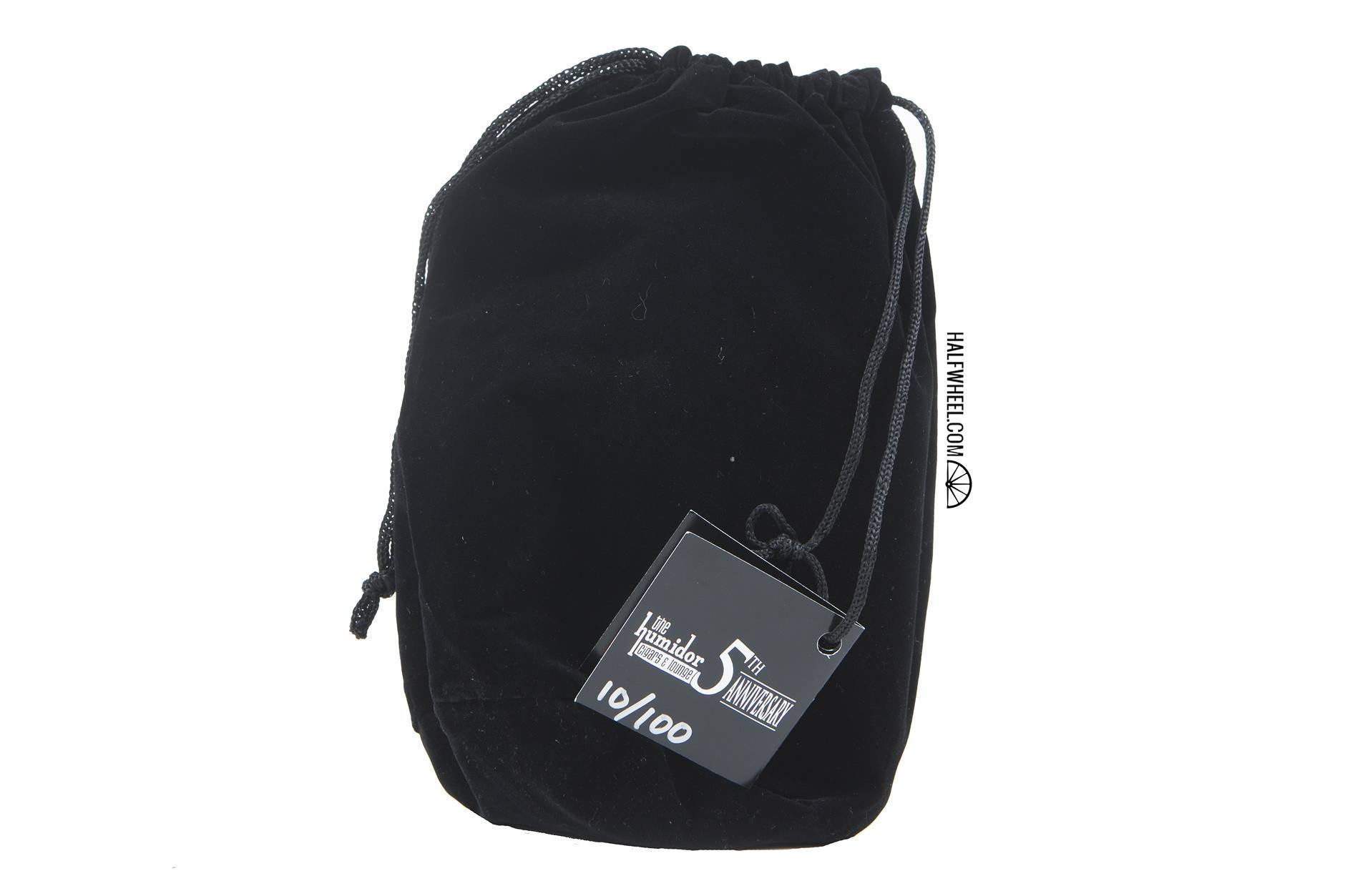 All six cigars were offered in 100 The Heist samplers containing each cigar and modeled after a jewelry bag.

All of the cigars are new vitolas for existing blends, and that’s no exception for the Alec Bradley Tempus Maduro, which is available in six regular production sizes: The colors on the wrapper are immediately striking, as a rich clay and dark brown shade come together in a way I can’t recall seeing and give the cigar a visual depth and complexity that you don’t realize is missing from a bulk of other sticks. There is a slight bit of sheen but the cigar is by no means oily, with the leaf offering very small hairline veins and no visible tooth. Given the short and stout nature of the cigar, as well as the flat cap, I have a hard time calling it a torpedo, though it isn’t an ill-fitting name, and the shape is certainly more torpedo than belicoso. There is a fairly sizable piece of tobacco used to wrap the head of the cigar, with a small piece added for the actual cap. At the foot, there is just the slightest sliver of binder and filler. It’s a firm cigar to the touch, particularly at the head, with the box-pressed vitola showing little give. The pre-light aroma is dry and neutral with wheat toast and a faint bit of sweetness in the background. While the firmness of the cigar was noticeable in the hand, it’s even more so in the mouth, as the cold draw is tight and feeling like it will need some additional help. On the first cigar I took off what I thought would be plenty of the cap, but the tobacco was so incredibly tightly packed I had to take off a smidge more to get a workable draw, and even then it was tight and nearly rock hard in the mouth.

I can’t say I’m blown away by the first puffs of the first Alec Bradley Mr. Orange, as the tight draw becomes the main focal point and I’m hoping I can make it work without having to cut even further down and risk issues with the wrapper. It’s a medium-bodied flavor profile that offers light touches of earth and sweetness, though the second cigar—which got an even bigger cut—is showing good amounts of pepper in the first inch before adding in an almost black cherry sweetness that is thick and syrupy on the palate. The two cigars offered staunchly different burning experiences, as on the first cigar smoke production suffers a bit with the tight draw, and the burn line starts to waiver early on, though having used matches to light the first cigar I could possibly attribute that to a slightly uneven toasting. The second cigar, with its wider cut at the head and a torch used to light the foot, shows a much more even burn with stacked gray ash. The sweetness subsides a bit and clears the way for a rich earth note that packs some dryness, clay and even a touch of mineral and sets the cigar up for its second third. After conceding that more of the cap will have to be cut in order to get a serviceable draw out of the first Alec Bradley Mr. Orange, I snip another bit off and thankfully it seems to do the trick, as the cigar opens up with a much brighter note of earth that is the calling card of Mexican San Andrés wrapper. A thick cherry sweetness is also much more prevalent in the nose, and retrohales help to bring out all that the cigar has to offer. There isn’t much deviation from the core flavors that the cigar has shown so far, other than that the sweetness becomes less prevalent with each puff and the earth note stays dominant, distilling to a lighter version by the time the cigar is ready to enter its final third. The burn line remains sharp and even, while the ash is dense and holds on very well. A hit of smoke gets in my eye and shows the first real punch that this cigar had to offer, with a few more puffs proving it isn’t done as the nose gets a significant peppery tingle. There is a wonderful smokiness that comes wafting off of the Tempus Maduro; it’s meaty, thick and deserving of the term delicious, while pepper starts to get sprinkled on the tongue to bring both senses together in wonderful harmony for a few puffs. Sadly it’s fleeting, as the cigar quickly turns sour with about two inches to go, but that too only last a few puffs and things appear to be back on track with strong notes of earth finishing out the cigar. There are still no issues at all with the way it has burned, and the second cigar in particular has been nearly flawless. It’s a shame when a technical or construction issue so adversely affects a cigar in the way that the overly packed head of the first Alec Bradley Tempus Maduro Torpedo soured my impressions of it. The difference between the first and second cigar were night and day, and when it had enough air movement the cigar performed beautifully and delivered some fantastic flavors that showed off great notes of the San Andrés wrapper. There are two takeaways from this cigar: the first is that you should always make sure you have enough air movement for any cigar you smoke because it will affect the flavor, and the second is that the Tempus Maduro is a much better cigar than I had given it credit for being. While this specific vitola might not be one worth getting worked up over, the line is certainly worth a revisit if you haven’t had one lately.